Accessibility links
At U. Of Texas, A Melting Pot Not Fully Blended The Supreme Court hears arguments Wednesday in a case that may decide the future of race-based admissions policies at the University of Texas and around the country. While today's campus is highly diverse, students report that racial divides and stereotypes still exist. 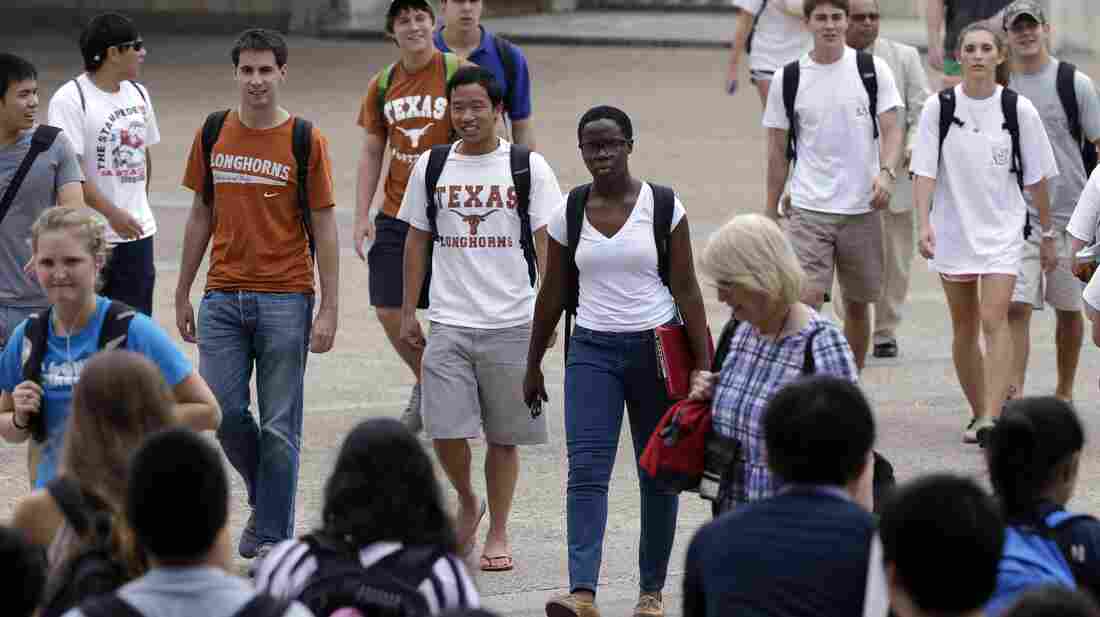 The Supreme Court will hear oral arguments Wednesday in Fisher v. University of Texas at Austin, a case that could determine the future of policies that include race as a factor in university admissions. Eric Gay/AP hide caption

On Wednesday, the Supreme Court is set to hear arguments in a landmark case about race and college admissions. In 2008, a white student named Abigail Fisher was denied admission to the University of Texas, Austin.

Fisher sued the university, claiming she was denied admission because of her race. Her suit, Fisher v. University of Texas at Austin, could mean the end of admissions policies that take race into account.

The key argument in favor of affirmative action policies is the notion that diverse campuses benefit everyone. In previous cases, justices have ruled that a campus with a diverse student body promotes cross-racial understanding and a robust exchange of ideas, while also helping to break down stereotypes.

Today, University of Texas students say their diverse campus of 52,000 students does provide opportunities for students of different backgrounds to interact. But, some note, despite the racial and ethnic mix, divides and stereotypes still exist.

On a recent day at the university's Gregory Gymnasium, teams are playing intramural volleyball on four courts. On one court, a team comprised entirely of Hispanic students is squaring off against a group of mostly white players, in a matchup between the Hispanic Student Association and students who staff the school's Student Activity Center.

"It's a really good opportunity, I think, for people of different races and different backgrounds to come together for one sport," says sophomore Allison Killian. "We're actually interacting with each other through athletics."

For freshman Thomas Pena, opportunities like this are something of a first. Thus far, he says, his interactions with non-Hispanic students at the university have been limited. "I've talked to a few, but I haven't branched out completely yet," Pena says.

Sophomore Karina Ramos understands feeling overwhelmed — and sometimes lonely — at such a large university. "It's a big campus. You need to connect with somebody like you — it's really helpful."

Ashley Reed, freshman at the University of Texas, Austin

"You understand [other groups] better, you understand what they do better, why we don't connect as much," Ramos says. "And you can change that."

Many Different Groups, Not Always Mixing

That's not something Ramos, Pena and Killian experienced much before attending the university. All three say they went to high school with classmates who overwhelmingly looked like them.

They've found a much more diverse student body at the University of Texas. The demographic breakdown is just under 50 percent white, 18 percent Hispanic, 15 percent Asian and 4.5 percent African-American.

Ashley Reed, a freshman studying Radio, Television and Film, is hanging out at the campus' Malcolm X Lounge after a meeting of the Texas Gospel Fellowship, a predominantly African-American group. Despite the diversity on campus, she says students of different ethnic and racial groups tend to keep to themselves.

Watt says his club's events are open to all students, but members have been disappointed that turnout among non-Asians isn't higher, like at a recent event featuring Olympic speedskater Apolo Ohno. But the group hasn't given up, Watt says; it's now dreaming of getting NBA star Jeremy Lin to visit from Houston. 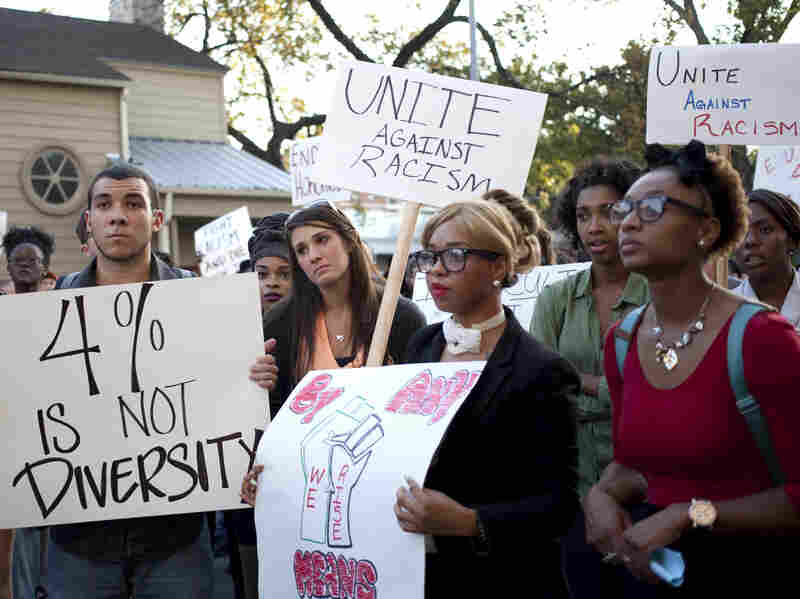 Students rally Oct. 3 in the wake of reports of water balloon attacks on minority students at the University of Texas at Austin. Campus police are investigating the incidents. Marisa Vasquez/The Daily Texan hide caption 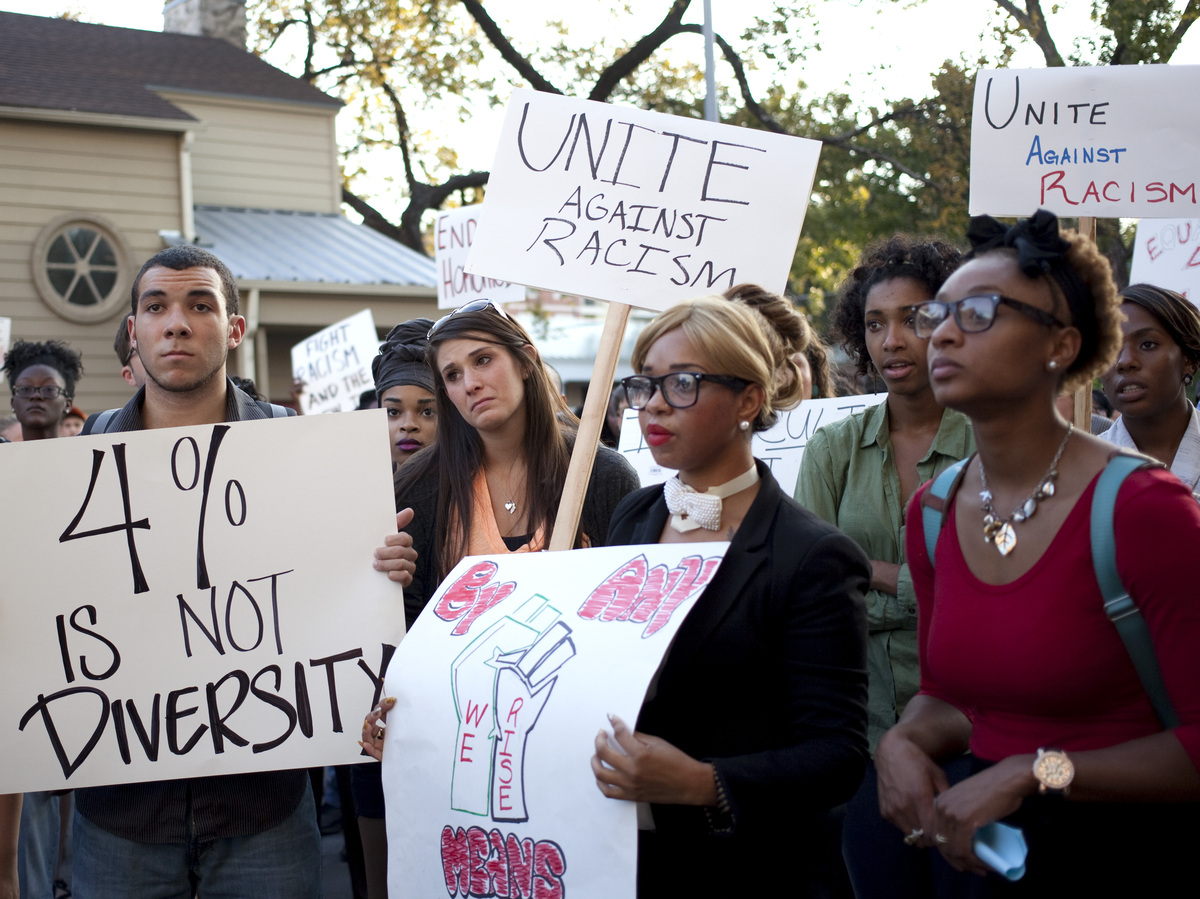 Students rally Oct. 3 in the wake of reports of water balloon attacks on minority students at the University of Texas at Austin. Campus police are investigating the incidents.

The university argues that it's important to achieve a critical mass of students of different backgrounds on campus.

"Unfortunately for some groups, particularly African-Americans ... [they still] can be isolated in class. Maybe one, or maybe a small handful, in a class," says Gregory Vincent, vice president for the university's Division of Diversity and Community Engagement. "And until we can get that worked out, I think it's going to be an important goal to achieve."

Freshman Ashley Reed says she's felt discomfort being the only black student in class. In one class, she recalls, students were discussing different genres of music videos. "Then we get to documentary [style video], and it's Snoop Dogg's 'Nuthin But a G Thang,' " Reed says.

Reed suddenly felt like all eyes were on her. "I'm the only black person in that class of 15, and I'm like, 'Ooh — awkward," she says. "I definitely felt people were looking at me [thinking], 'What should I do? Would that be offensive to her if I started bopping my head?' "

Other students report that there are still stereotypes yet to be broken on campus. "People think all Asians get good grades," says Asian-American student Vicky Nguyen. "That's so not true."

Nguyen never really had Asian friends growing up in San Antonio. Her schools, she says, were predominantly black and Hispanic. It was only after enrolling at the University of Texas that she started hanging out with other Asians. Now, she says, she misses the loud, outgoing, slang-slinging person she was in high school.

"Everyone always says, when you come to college you change, you can totally reinvent yourself," Nguyen says. "And I think that's something I tried to do — and [now] I kind of just want to revert back to how I was."

So this year, Nguyen has joined a few other student groups — in hopes of building a more diverse group of friends.

On the eve of arguments in Fisher v. University of Texas, students paint a picture of a campus with its share of racial tensions. But they also describe a place where people are hungry for more genuine interactions — in the classroom and in every area of campus life.

This fall, emotions have run high over several incidents on and off campus. Campus police are investigating reports of bleach-filled balloons being dropped on minority students who feel they were targeted because of their race.

In a separate incident, a sorority hosted a controversial "fiesta party," at which students arrived dressed in T-shirts that read "illegal" and "border patrol."

Vincent, the University of Texas vice president, says it's imperative that all students understand how hurtful their behavior — even pranks — can be.

"Unfortunately, we mirror society. And we're still working through issues, even though things are getting better," he says.