Accessibility links
German Catholics' Path To Heaven Comes With Taxes German Catholics are facing a stark choice: Pay a church tax or forget about receiving the sacraments, including baptisms, weddings and funerals. Germany taxes registered Catholics, Protestants and Jews. In 2011, the tax raised $6.5 billion for the Catholic Church alone. Many progressives and conservatives are up in arms over the German bishops' decree. 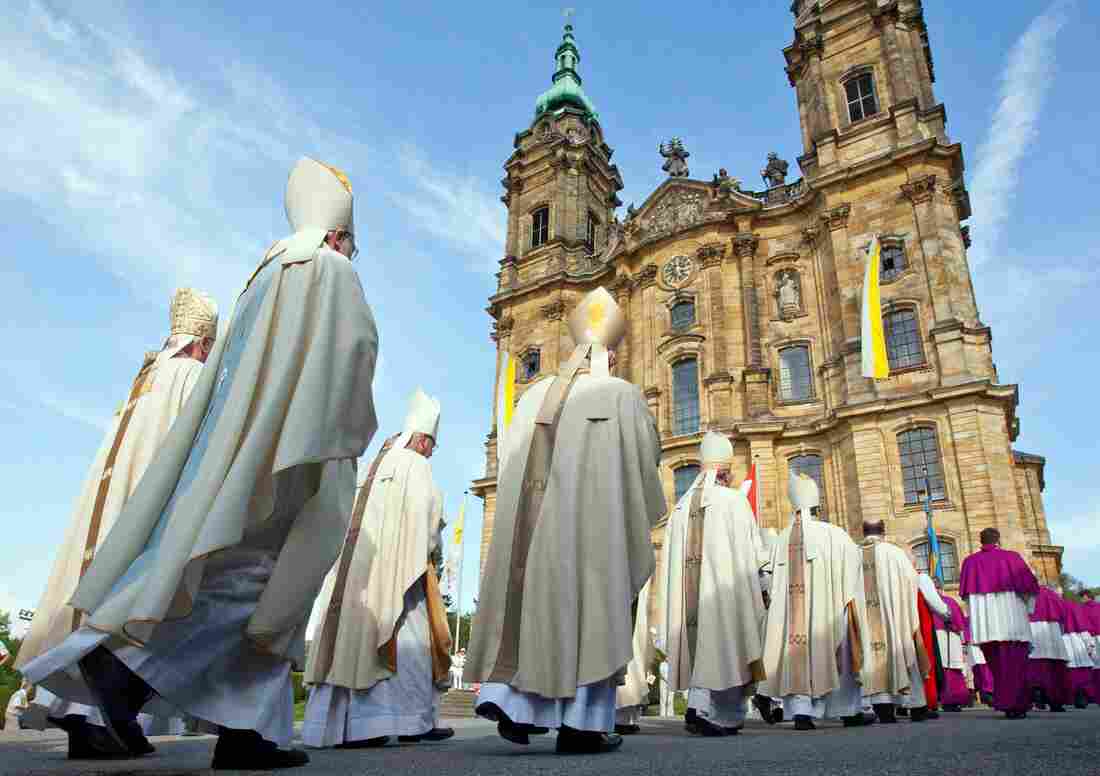 Bavarian bishops walk in a procession to the Basilica of the Fourteen Holy Helpers near Bad Staffelstein, Germany, in May. A decree by the German bishops' conference warns that German Catholics who do not pay a state church tax will be denied sacraments. Daniel Karmann/EPA/Landov hide caption 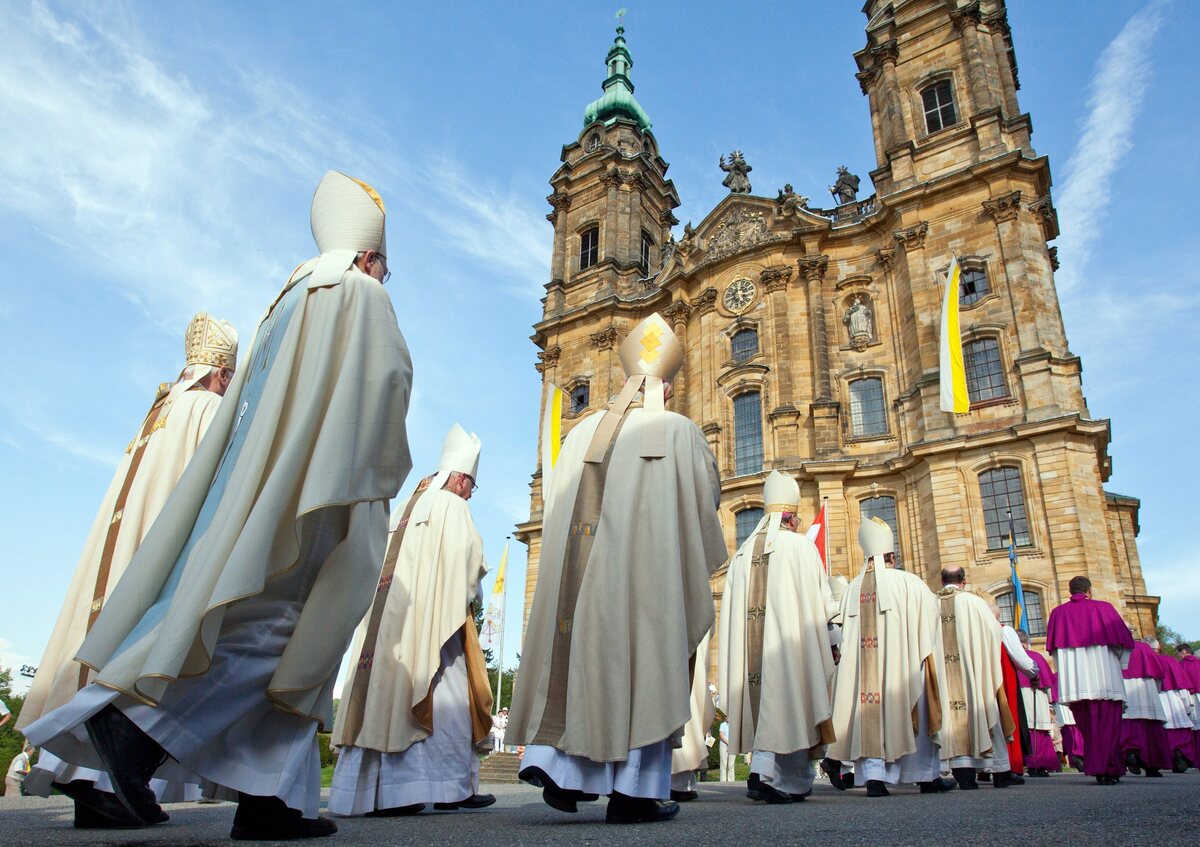 Bavarian bishops walk in a procession to the Basilica of the Fourteen Holy Helpers near Bad Staffelstein, Germany, in May. A decree by the German bishops' conference warns that German Catholics who do not pay a state church tax will be denied sacraments.

Germany's bishops have a clear message for the country's 25 million Catholics: The road to heaven requires more than faith and good intentions; it requires tax payments, too.

Last month, German bishops warned that if members of the Catholic Church don't pay the country's church tax, they'll be denied the sacraments — including baptisms, weddings and funerals.

In increasingly secular Europe, Germany is one of the few countries where the state collects a special levy from tax-registered believers and hands it over to three organized faiths.

Registered Catholics, Protestants and Jews pay a surcharge of up to 9 percent on their income. The Catholic Church alone received some $6.5 billion in 2011.

In issuing the stringent new decree, Archbishop Robert Zollitsch, the president of the German bishops' conference, said that not paying taxes for the church is a grave offense, and that sacraments will be banned for those who distance themselves from the church.

In Italy, Art As A Window Into Modern Banking

"In Germany, the church is a community of faith which coexists alongside the legal system," Zollitsch said. "The two cannot be separated."

Many conservatives and progressives are up in arms.

On a recent Sunday, bells announce Mass at the Church of the Sacred Heart in Berlin's Mitte district. A few elderly women walk through the large Gothic doorway. Some young couples with children park their bikes in the courtyard.

Not everyone is willing to talk about the bishops' decree. But one young woman, Matina Nagher, is angry.

She says she pays her church tax. But, she adds, "I think it is absolutely not acceptable; if you want to have sacraments, you can get them if you pay taxes or not."

Sebastian Rus is more diplomatic. The middle-aged man says the church does a lot of good work for the poor and society, and therefore needs money.

But he cannot accept the ban on sacraments.

"That's not a good decision to say, 'If you don't pay your tax, you have not the right to have a Christian funeral, a Catholic funeral,' " Rus says. "In my opinion, that's not good."

After three years of negotiations, the Vatican approved the bishops' decree. But it has unleashed a debate even among church law experts, some of whom say it raises very serious questions about justice toward the faithful.

As church historian Carsten Frerk points out, setting conditions on church membership is against the church's own legal code.

"The church law itself has no idea of separation from the church," Frerk says. "You cannot go out of the church under Catholic Church law, because when you are baptized, you are a Catholic your lifelong."

Growing Numbers Are Leaving The Church

Christian Weisner, spokesman for the grass-roots Catholic organization We Are Church, says the bishops' decree carries a threatening message that raises the specter of the grave sin of heresy.

"It doesn't use the word 'excommunication' — and actually it is not excommunication — but in fact it is like an excommunication," Weisner says, referring to official expulsion from the church, the ultimate penalty under canon law.

The bishops issued their decree as church defections are growing. In 2010, when the clerical sex abuse scandal exploded in Germany, nearly 200,000 Catholics left the church. In a normal year, it's 100,000.

Church statistics show that only 13 percent of Germany's Catholics attend Mass weekly. And, Weisner says, the majority of those who are observant criticize the church leadership.

Like Weisner, many German Catholics are starting to resist what they see as taxation without representation.