Accessibility links
Instead Of Surgery, Man Pedals Off The Pounds Ernest Gagnon, who once weighed 570 pounds, chose an unusual way to lose weight. Instead of surgery, he decided to take up cyclocross. He lost more than 200 pounds, and now he's even racing. 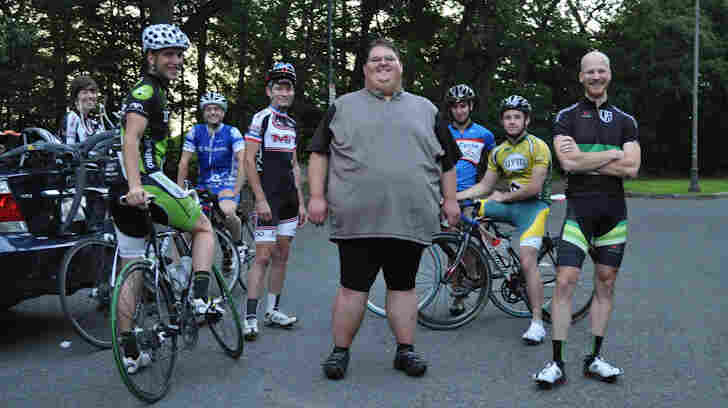 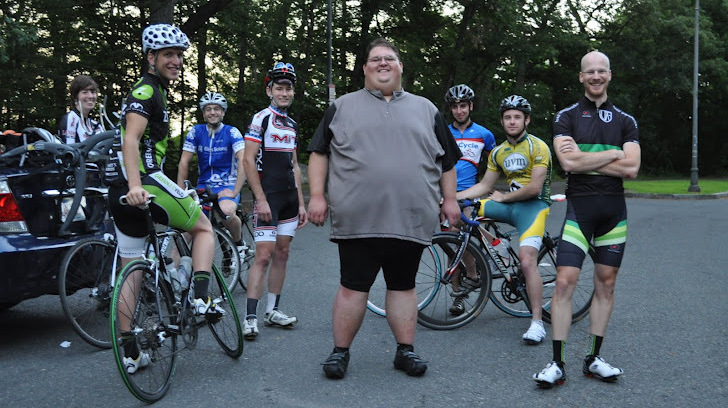 Ernest Gagnon weighed 570 pounds before he decided to lose weight by taking up cyclocross racing. Forgoing surgery, Gagnon lost more than 200 pounds and recently competed in his first cyclocross race.

A lot of Americans are struggling to lose a whole lot of weight, and they try all kinds of crazy things.

Ernest Gagnon — a man from Billerica, Mass. — decided to shed pounds by getting into the often intense, high-adrenaline sport of cyclocross: racing road bikes on obstacle courses.

Two years ago, Gagnon tipped the scales at 570 pounds. He was depressed and embarrassed to leave the house.

"Being as big as I was, I really felt like I didn't belong anywhere," Gagnon says. "I was stuck in my house for almost 10 years, just going to my work and back."

Back then, Gagnon's diabetes was getting more serious. He was losing the circulation to his legs, and his doctors were talking about gastric bypass surgery.

Then, some sort of a switch flipped in his head and Gagnon decided he was going to race bikes, something he'd wanted to do since he was a kid.

Gagnon contacted Cosmo Catalano, a cyclist from Hartford, Conn., on Facebook, and asked if he wanted to go for a bike ride.

This is how hundreds of New England cyclocross racers met Gagnon.

Now, just two years after making that decision, Gagnon met up with his bike racer buddies in Lancaster, Mass., to do his very first race, called the Midnight Ride of Cyclocross.

These days, at age 33, Gagnon is 240 pounds slimmer. He is still very big by any standard, but a lot less so. Seeing him, surrounded by svelte, Lycra-clad athletes, squeezed into some spandex of his own, is a little bit jarring at first. 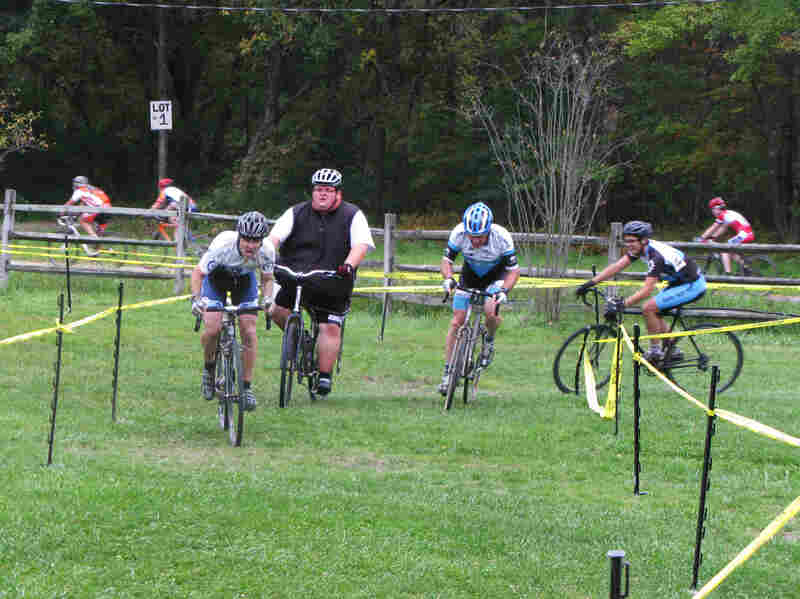 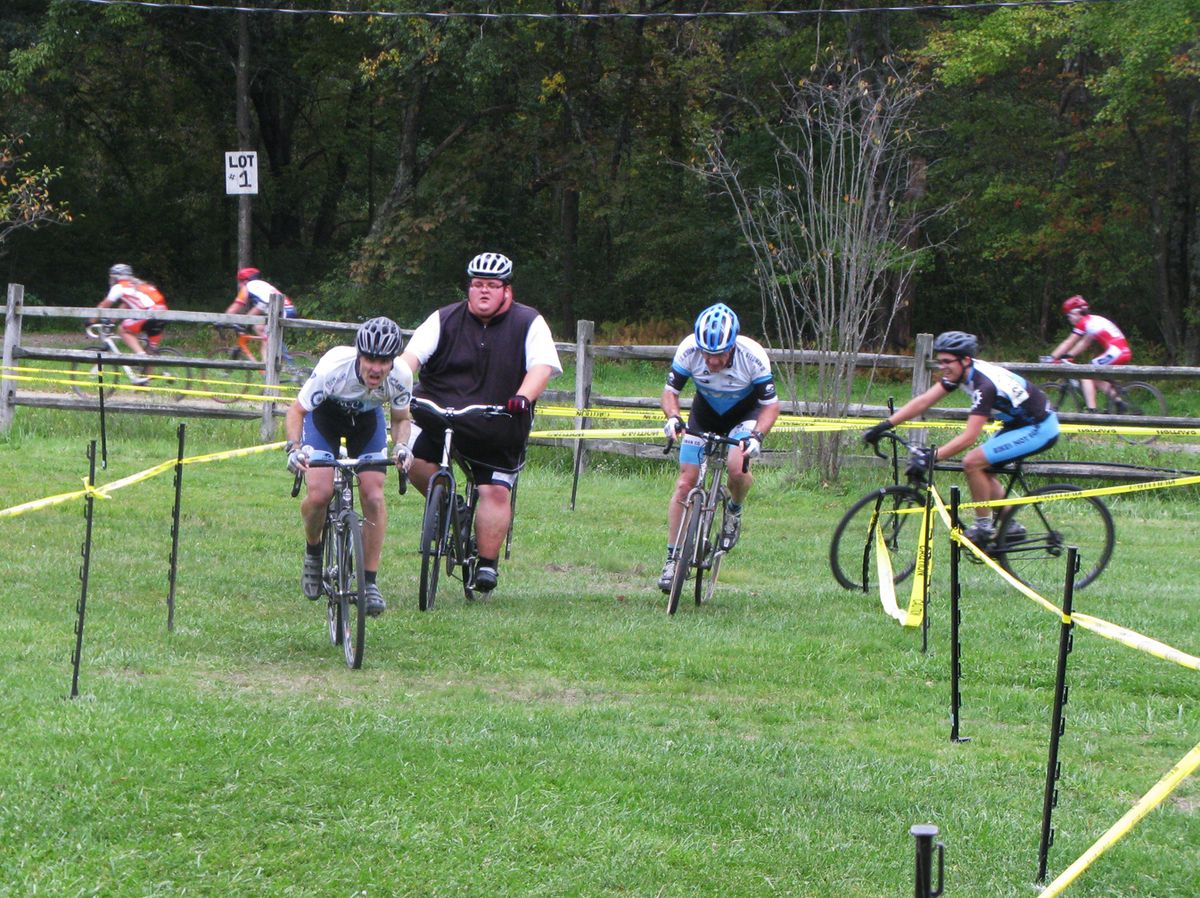 Ernest Gagnon competes in his first cyclocross race, the Midnight Ride of Cyclocross, on Sept. 26 in Lancaster, Mass.

As you watch him, however, you start to get used to the big guy in bike shorts, especially when you realize that Gagnon himself is way past being self-conscious.

"You know, I'm riding in spandex in Boston with these guys. Never thought I could do that, [and] it's liberating in a way," Gagnon says. "It really [forces] you to be honest with yourself, accept who you are; because if you can't accept who you are, you can't do anything."

Before the race, Gagnon goes for a ride around the course with his lieutenant, Catalano, who gives him tips about how to ride it. Gagnon rides along on a custom-built titanium bike that is reinforced to hold his weight.

After checking out the course, he lines up at the start in a crowd of 60 other racers, and after a few nervous, final moments, the race is off.

The racers hurtle along dirt paths and through soccer fields on bikes designed for racing on pavement. There are obstacles in the course, like barriers that they have to jump over, or steep hills they run up with the bikes on their shoulders.

The slender, athletic racers are panting and working hard. For Gagnon, however, it's actually physically dangerous. He has angina, and his doctor told him not to let his heart rate get too high during the race, or he could end up in the hospital — something that has happened before.

Everybody at the race knows about Gagnon, and throughout the race the announcer gives little updates on his progress.

"Two laps to go for Ernest Gagnon," the announcer says. "Nicely done Ernest — hang in there!"

A steady stream of folks Gagnon barely knows, some of the 5,500 Facebook friends who have sought him out after hearing about his story, come by to congratulate him.

Gagnon says there isn't a weight goal he's aiming for; he just wants to be healthy. He's already eyeing a couple more cyclocross races to do later this year.