Accessibility links
Minnesota Trial Offers Window On Jihadi Pipeline Several years ago, young Somali immigrants living in the Minneapolis area were disappearing. They later resurfaced in Somalia, where they joined a terrorist group called al-Shabab. Now some are back in Minnesota and are testifying against a man accused of recruiting them. 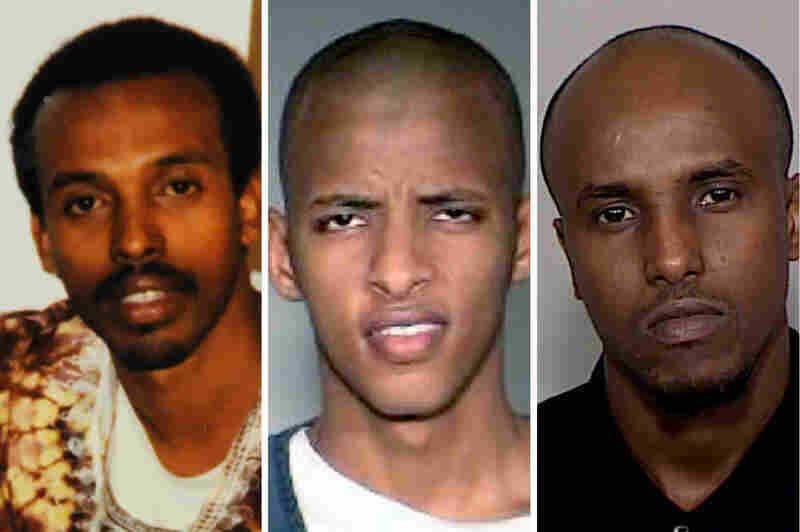 Abdifatah Yusuf Isse (center) and Salah Osman Ahmed (right) are among more than 20 young men who left Minnesota since 2007 to join al-Shabab. They are testifying against Mahamud Said Omar (left), who is accused of helping to send fighters and money to the al-Qaida-linked group in Somalia. AP hide caption 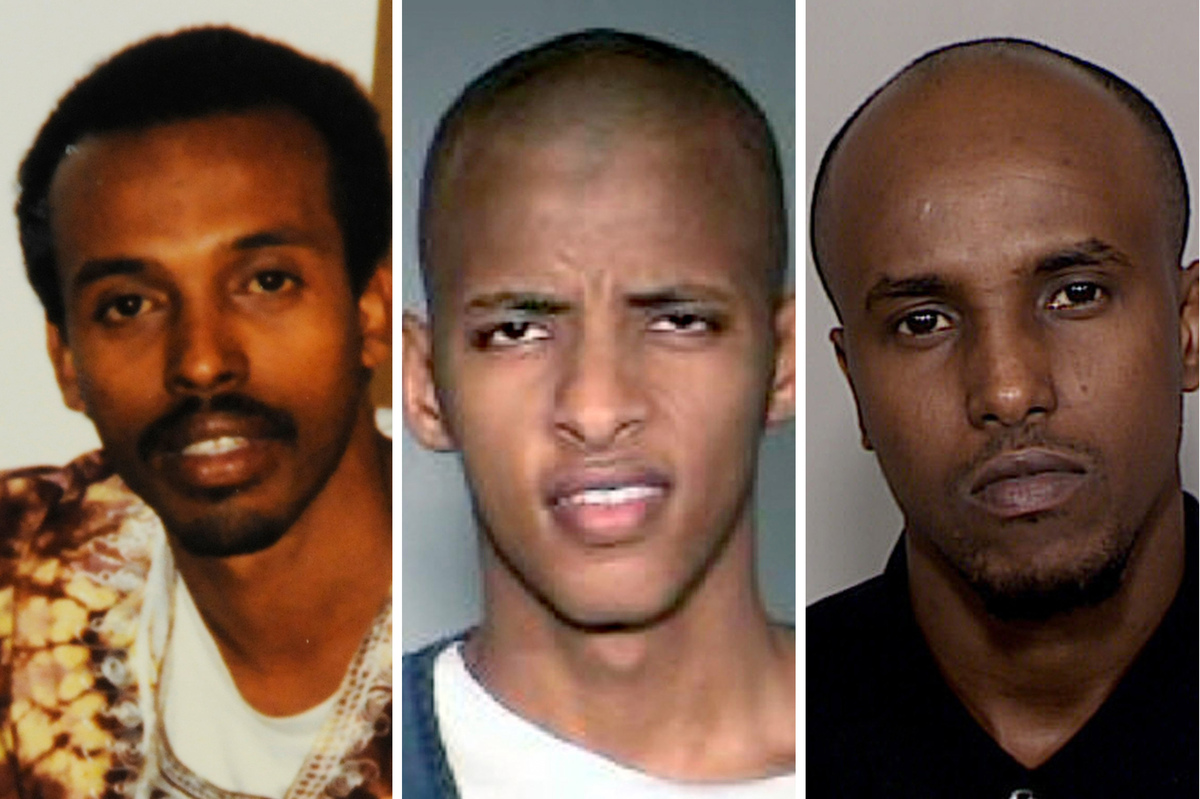 Abdifatah Yusuf Isse (center) and Salah Osman Ahmed (right) are among more than 20 young men who left Minnesota since 2007 to join al-Shabab. They are testifying against Mahamud Said Omar (left), who is accused of helping to send fighters and money to the al-Qaida-linked group in Somalia.

A terrorism trial unfolding in a federal court in Minneapolis is providing a rare look inside a jihadi pipeline that funneled some two dozen young Somali-Americans to Somalia to join a terrorist group there.

The testimony from three young men who joined a group affiliated with al-Qaida and subsequently returned to the U.S. has shown just how easy it is for young men to leave the U.S. and join a terrorist organization.

Young Somali-Americans began disappearing from the Twin Cities area at the end of 2007. At first it was unclear where they had gone. Some parents thought their children had been kidnapped or had returned to Somalia to see relatives.

It took months to figure out that the young men had traveled there to fight for a group known as al-Shabab. Federal officials worried that the men were training with the group to launch operations in this country. Most of the recruits had U.S. passports, which would have allowed them to return quite easily.

But the reality, based on the testimony of three young men who were al-Shabab recruits, appears to have been somewhat less sinister.

The men appear to have been duped into flying to Somalia with a combination of adventurous stories and appeals to their nationalism. Their motivation was less violent jihad and more a misplaced sense of having to prove they were good Somalis by returning to fight.

When Ethiopian troops entered Somalia in 2007, the young men felt compelled to take action. They said they thought they were going to Somalia to expel, in the words of one young man, the invaders.

"I was a foot soldier for al-Shabab," Kamal Said Hassan, 27, told the jury in testimony Tuesday. He said he fought against Ethiopian troops. But prosecutors were more interested in the larger process: How did he go from college student in Minnesota to jihadi fighter in East Africa?

Hassan described the recruitment meetings without emotion. They seemed more bureaucratic than fiery. One meeting, which took place in the fall of 2007, had a handful of the young men sitting cross-legged in a circle around a speakerphone. They had gathered to listen to a call from an al-Shabab member in Somalia.

"He was on the phone saying they were doing a great job against the Ethiopian troops," said Hassan. "Basically he was advertising for us what was going on there."

The phone call lasted just 10 or 15 minutes, Hassan said, but the young men in the room were hooked. They wanted to join the battle.

The riveting testimony from Hassan and others has made the man at the center of the trial, Mahamud Said Omar, seem far less significant.

Omar didn't attend the recruitment meetings and, according to testimony so far, seemed to be a figure on the periphery of the operation.

There have been 18 people implicated in the Minneapolis case, but Omar, who has pleaded not guilty, is the first to go to trial. Others have already pleaded guilty.

Prosecutors are trying to prove that Omar provided money and logistical help to ensure the young men got to al-Shabab. They say he introduced them to high-ranking al-Shabab leaders in Somalia, and paid for plane tickets and guns. However, little testimony so far has supported those charges.

The case has attracted attention because it appears to revolve around the most effective jihadi pipeline the U.S. has ever known.

The Somali community in the Twin Cities is one of the biggest in the United States. Lutheran church groups sponsored some of the first Somali families to come live in Minneapolis in the late 1990s during a raging civil war in Somalia.

The influx of Somalis became so large that local high schools started teaching courses in Somali. The Cedar-Riverside part of Minneapolis is known as Little Mogadishu because of the concentration of Somalis who live there.

The community tends to be insular, and in contrast to many immigrant groups, there is concern that the Somalis feel more affinity for the country they left behind than for their adopted home. That feeling of isolation, law enforcement officials worry, makes young Somali-Americans particularly susceptible to jihadi recruiters.

Salah Osman Ahmed, who has also testified in the Omar trial, has already pleaded guilty in the case and is awaiting sentencing. He said he spent two months with al-Shabab in Somalia before he decided to return to the U.S.

His testimony focused on what life was like once the young men arrived in Somalia. He stayed at a safe house in Merca, Somalia, south of the capital of Mogadishu, and said "at first it was fun."

The young men lived in a three-bedroom house with a woman they called Um Shabab — or "mother of the youth" — and two wounded al-Shabab fighters, he said.

They were instructed to stay in the safe house as much as possible so Merca residents wouldn't know they were there; but Ahmed said the men did manage to get out. They often went to the beach to swim and, he said, they sometimes played soccer while they waited for al-Shabab leaders to prepare a camp where they would train.

While awaiting instructions, Ahmed said they met a virtual who's who of al-Shabab's key members.

Omar Hammami, an American from Alabama who has joined the group, visited the safe house and congratulated the Minneapolis contingent for coming to Somalia to fight. A former al-Qaida bomb maker, known as Nabhan, was also introduced to the group. Nabhan has since been killed in a U.S. military operation.

Ahmed also provided one of the few links revealed so far between the defendant, Mahamud Said Omar, and the recruitment operation.

He said that Omar slept at the safe house for four or five days when the young men were there and provided them with pocket money.

After pointing out Omar in the courtroom, Ahmed said he "paid some expense money to Um Shabab."

He also claimed that Omar helped pay for a number of AK-47 rifles that the young men were required to buy. However, under cross examination, he admitted he never actually saw Omar give the money to anyone. The trial is expected to last for weeks.