Accessibility links
A Shifting Playing Field: Coming Out As A Gay Athlete Civil rights was once a common cause for pro athletes, but players have been relatively quiet about gay rights. Former athletes have expressed the fear and isolation of their "dirty little secret." Recently, though, there have been a few standout moments for gay rights in the sports world. 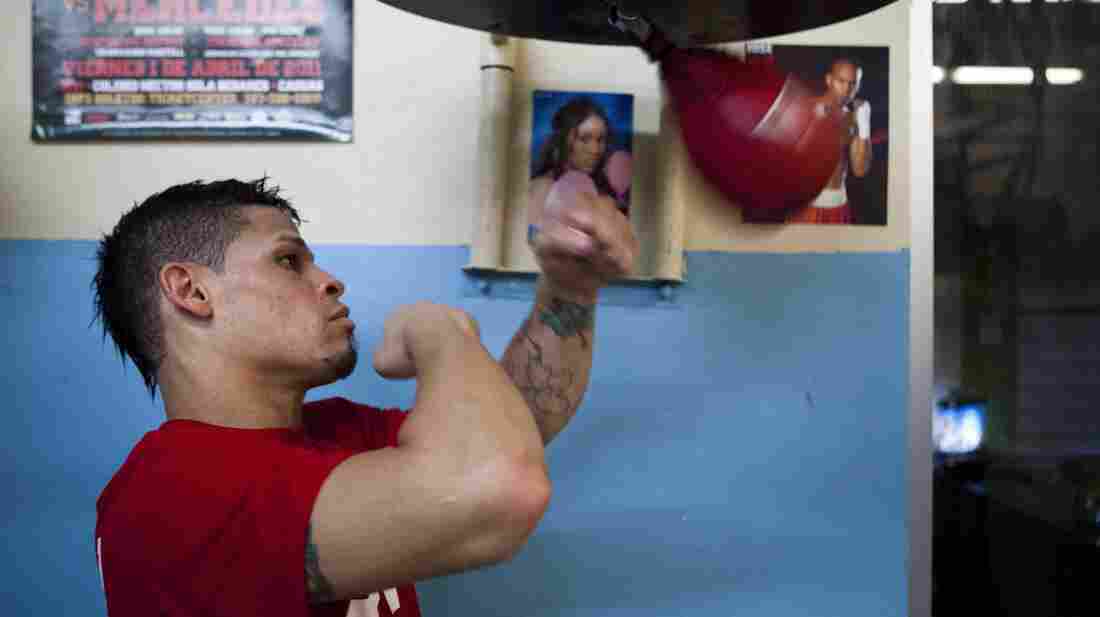 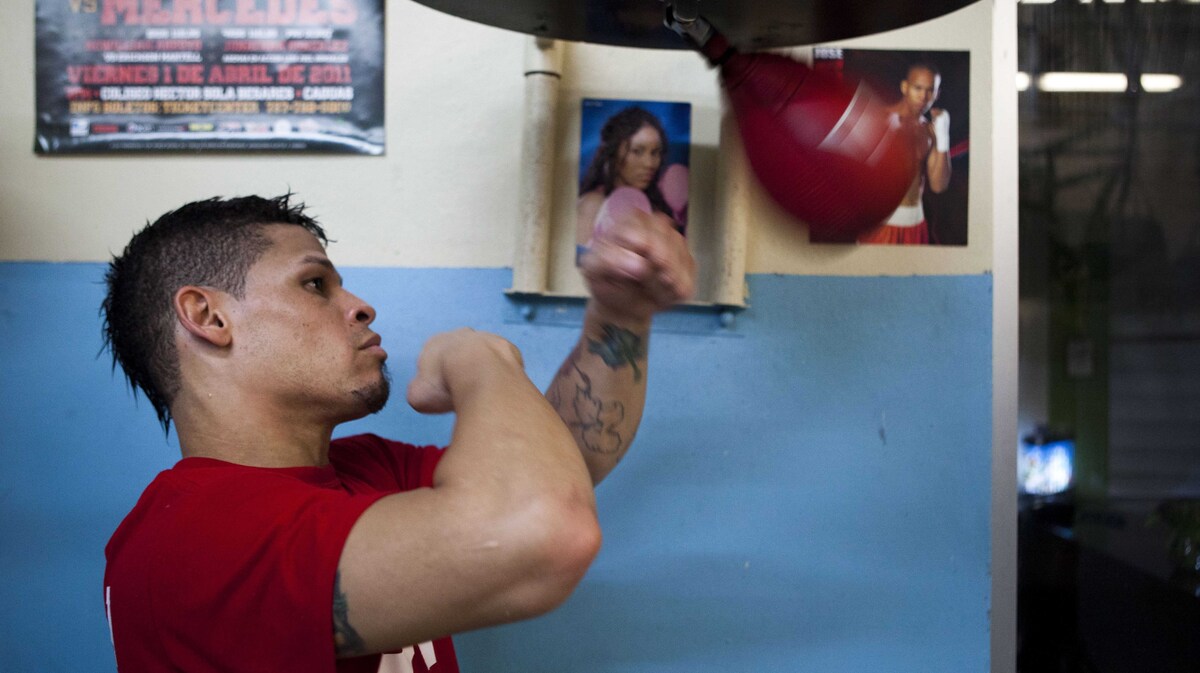 Boxer Orlando Cruz hits a speed bag at a public gym in San Juan, Puerto Rico, on Oct. 4. He said publicly that he is gay earlier this month.

These days, we're more likely to see professional athletes on products than protest lines. But it wasn't always this way. In the 1960s, sports stars were often as famous for what they believed as for their home runs.

Back then, many athletes spoke out about civil rights. Muhammad Ali was stripped of his heavyweight title and threatened with imprisonment for refusing to fight in Vietnam, on the grounds of racial discrimination.

By the 1970s, the issue of the day was women's rights. Tennis player Billie Jean King used her fame on the court to fight for equal opportunities for female athletes.

Today, King is also an advocate for gay rights, but for most of her career, she stayed in the closet. Now, it's not uncommon for a female pro athlete to come out, but as of yet, no current male players of America's four major pro sports (football, basketball, baseball and hockey) has publicly said he's gay. 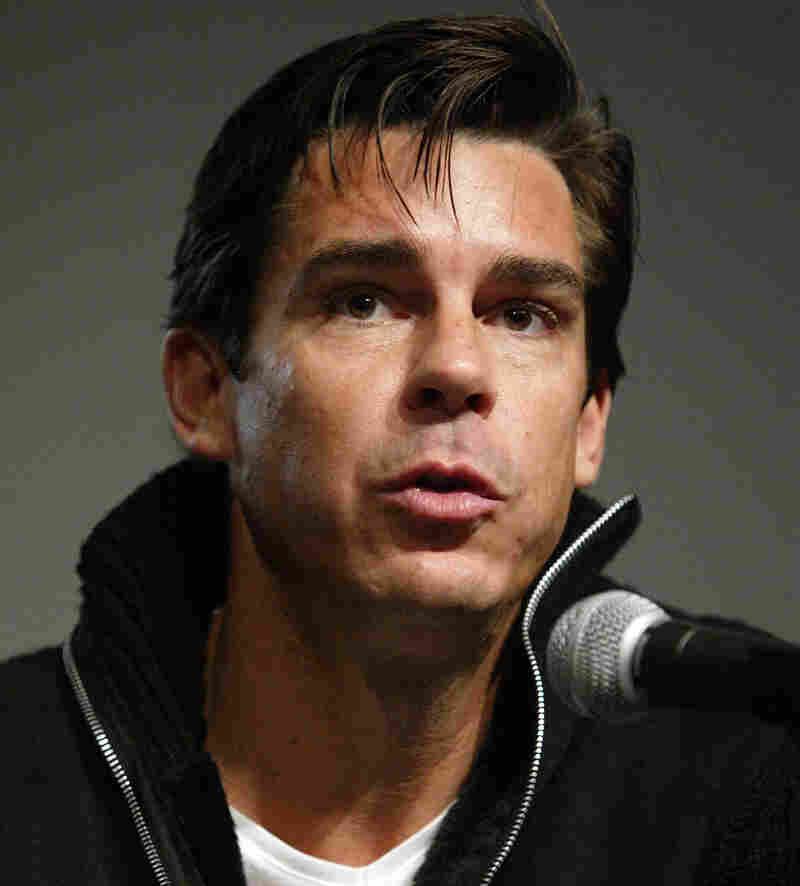 "For me, I was a baseball player, and I did not identify as a gay person who played baseball. I was a baseball player first and foremost," he tells weekends on All Things Considered guest host Celeste Headlee. "You don't get to the major leagues — nobody does — without making that the absolute No. 1 priority and passion of your life."

He says no one knew he was gay.

He spent three years with his partner, who died in 1995.

"That was a very, very difficult experience for me to try to weather on my own," Bean says. "But I just think that because I had no precedent of anyone in the environment, there was no person for me to model myself after. And I think that I was afraid."

When Bean played, he says gay slurs were "thrown around like 'if,' 'and' or 'but.' " Bean, author of Going the Other Way: Lessons From a Life in and Out of Major League Baseball, never spoke up. "I didn't talk about gay rights, I didn't defend gay rights. I didn't bring up the topic. It was my dirty little secret," he says.

When Brendon Ayanbadejo recently spoke out in favor of gay marriage, a prominent critic told him to stop talking and focus on football. Ayanbadejo joined host Michel Martin in September to talk about why he's committed to defending same-sex marriage.

Listen to Brendon Ayanbadejo on 'Tell Me More'

Some people have been standing up lately, acting as role models for young athletes, and the response has been positive.

Cyd Zeigler, editor at Outsports.com, keeps track of important moments in LGBT sports history. He says this year, and really within the past few months, there have been a few standout moments for gay rights in the sports community. One of those happened the first week of October, when pro boxer Orlando Cruz came out.

"I think that was super important because we hear the risks of coming out as an athlete, and one of them is physical danger from other athletes," Zeigler says. "And here's an athlete whose opponents are paid to try to knock him unconscious. The fact that he willingly came out of the closet — I think it's a powerful statement."

Baseball player Yunel Escobar of the Toronto Blue Jays received a three-game suspension for a gay slur written in Spanish in the black grease under his eyes in September. As ESPN reported, his forfeited salary went to two organizations promoting equality and gay rights. On top of that response from the MLB, Zeigler says, fans also rejected Escobar's actions.

Earlier this month, ESPN published a poll on athletes' political views, including whether the U.S. should legalize gay marriage. The study found overwhelming support in the NHL — 92.3 percent — as well as majority support in the NFL. MLB and NBA players were 45 percent and 46.2 percent, respectively, in favor of legalization.

"I think the players reflect Americans their age. Players are pretty progressive guys. They're generally liberal and they're accepting of their teammates," he says. "The thing about NFL teams is that you don't choose what team you go to. Guys come from all around the country, all different socioeconomic backgrounds, with different families, different races, and they form a team. And so you have to be accepting of the differences of your teammates."

He believes the results would not be the same if they polled the coaches, who generally want to avoid distractions.

"Coaches encourage players not to use their position as a professional athlete as a platform for any type of social issues," he says.

Jackson also says the draw of media attention — to the player and his team — could serve as a disincentive to coming out. So the first active player to come out may be from a team in a smaller town with less of a media spotlight. He also thinks it might have to be a superstar player.

"If you're more trouble than you're worth, essentially, in a coach's mind — regardless of what the distraction is — then they'll just cut you loose," he says.

Broadening The Base, Supporting Gay Rights

"I think part of it is they want to build their fan base. ... They have a lot of tickets to sell," he says. "But I also believe that sports has transformed, and it is no longer a place where homophobia thrives."

Wade Davis, a former NFL player, insisted for years that Zeigler didn't understand how homophobic the sports world was. Davis came out in June, as Zeigler reported for Outsports.com.

"He got a ton of incredibly positive reaction, not just from fans and other people, but from former teammates saying, 'Why didn't you trust me, man? I wish you'd come out,' " Ziegler says.

"It was all in his head," Ziegler says, "and yes, there might be some slurs here or machismo going on in the locker room, but most of what's keeping athletes in the closet today is in their own heads."