Accessibility links
Straight Up Difficult It's difficult to build a working four-rotor helicopter that spans 100 feet and only weighs 80 pounds. It's even harder when your engine is a 0.7-horsepower person. But two teams of young engineers hope to do just that.

"I grew up wanting to fly," says Graham Bowen-Davies. "I guess I just settled for being an engineer."

He's standing on an indoor track in southern Maryland, watching a giant helicopter take flight. At the end of each of its four spindly arms — arms he helped design and build — a giant rotor churns the air. In the cockpit sits the engine: a 0.7-horsepower, 135-pound graduate student named Kyle Gluesenkamp.

Gluesenkamp is pedaling like crazy to keep the rotors spinning and the craft aloft.

Bowen-Davies and dozens of his fellow students from the University of Maryland are chasing one of aviation's last milestones: the Sikorsky Prize. The American Helicopter Society (AHS) has promised $250,000 to the team that can build a human-powered helicopter. All it has to do is hover for a minute, reach a height of 3 meters (about 10 feet), and stay in a 10-meter box.

Turns out, that's harder than it sounds. The prize has been unclaimed for more than three decades.

The University of Maryland joined the race in late 2008. Inderjit Chopra, director of the university's Rotorcraft Center, recruited a handful of graduate students and undergrads to take on the challenge. They named their helicopter Gamera after a flying turtle from a Japanese monster movie (U of M's mascot is a terrapin).

TIMELINE: The History of Human-Powered Flight

In the spring of 2011, after two years of work and 20 failed attempts, Gamera finally flew ... for four seconds.

"We went out for drinks," Bowen-Davies remembers.

Since then, about 75 students have worked on Gamera. They've slowly chiseled away at their own record. In June, Gluesenkamp flew for 49.9 seconds; another flight cleared 3 feet. Four long years of work, and not much altitude. That can get exhausting.

"At some point, you don't want to do it any more," Bowen-Davies says. "You've been going all week, and you're dirty and grimy and your fingers are cut up — but you have to do your part. You have a commitment to the team."

More than 300 miles north, near Tottenham, Ontario, another group of young engineers is also chasing the Sikorsky Prize. Their helicopter is named Atlas and their team is much smaller.

"It's only eight people, but it's equivalent to an army of a hundred," says Todd Reichert, leader of Team Atlas. Everyone, he says, wants "to challenge themselves and do something that other people have said is impossible."

Doing the impossible is a passion for Reichert. In 2010, he and his colleague Cameron Robertson built and flew the world's first human-powered ornithopter — an aircraft that flies by flapping.

Now Reichert and Robertson have cobbled together public donations and corporate sponsorship to finance Team Atlas.

"Honestly, what we're trying to accomplish here is nothing short of historic," Reichert told his team on the first day of construction, in May. "We need to both design and construct far better than any team has done before." 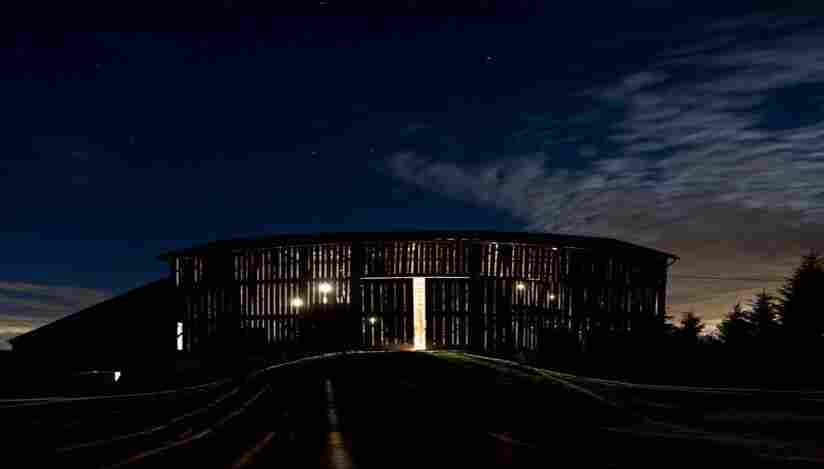 A Canadian team built Atlas in this abandoned barn at a glider club near Tottenham, Ontario. It once held livestock; the roof leaks during thunderstorms. Aerovelo hide caption

The most famous pioneers of human flight, Wilbur and Orville Wright, had an easier task than these engineers. Their plane could use its forward momentum to climb a ramp of fresh air. Gamera and Atlas must rise through their own turbulence.

But the central problem is the same: "One of the big challenges for the Wright brothers was getting an engine strong enough to move them through the air, but light enough that they can actually get off the ground," Bowen-Davies says. "In that respect, we're no different — we've got the same problem. Our engine just happens to be a person."

Both teams use toothpick-thin carbon fiber tubes, Styrofoam and balsa wood. Though the finished helicopters are more than 100 feet across, they weigh less than 100 pounds.

Gamera is so light that the draft from an air-conditioning unit can swamp a flight. And on its way down, it tends to catch air like a falling piece of paper, drifting out of its 10-meter box and into a wall — or sometimes, into a spectator. No one has ever been hurt, but the structure has suffered some nasty breaks.

"That's when we learn — when things break, we know we have to make them stronger," Bowen-Davies says. 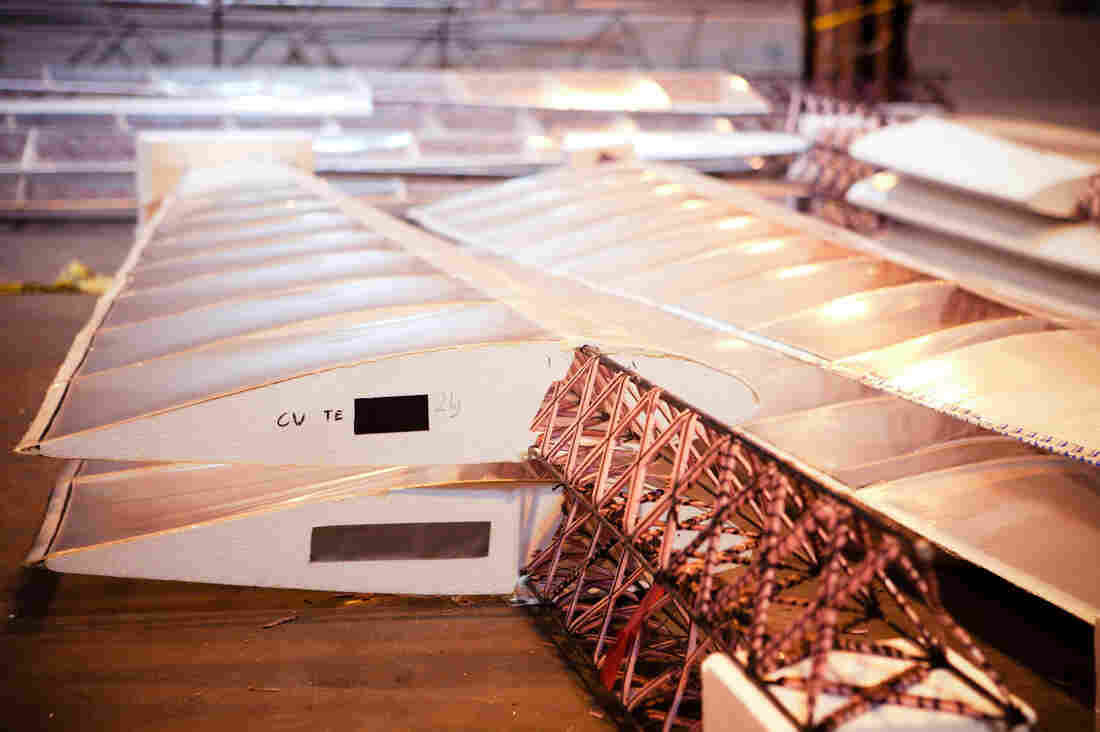 More people have walked on the moon than have successfully flown a human-powered helicopter. Just like their crafts, these pilots have to be light and strong.

Earlier this year, an Olympic cyclist called up Gamera's adviser, Chopra, and volunteered as a pilot. He offered to come out to Maryland once the games were over. Chopra turned him down: At 175 pounds, the Olympian was too heavy.

"[Chopra] was looking for children — middle-school children — because they are so light and full of energy," says Elizabeth Weiner.

A graduate student, Weiner helps build Gamera's rotor blades and coaches its pilots. She tests their power outfit, gives them instructions during flight tests and yells at them when she sees them eating pizza.

"It's more of a joke," Weiner says, "but a little bit serious as well."

This summer, Weiner has been busy training newcomer Henry Enerson, a freshman at Maryland and former middle-distance runner. He weighs just 120 pounds and can produce 0.6 horsepower for a full minute. 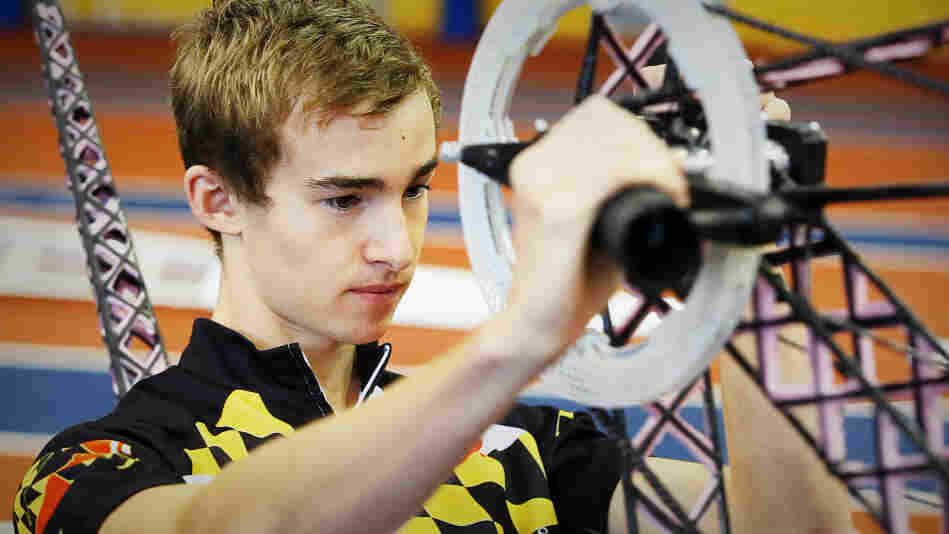 When you add up all the late nights, cut fingers and crashes involved in building a human-powered helicopter that can get only a few feet off the ground, it makes you wonder: What's the point?

"It's an engineering challenge," Weiner says. "Nobody's ever done it before."

Sure, pursuing the Sikorsky Prize might inspire innovations in ultralight composite materials. Sure, the project has provided a hands-on learning opportunity for scores of students. But that's not what keeps them engaged.

"It's really an opportunity to inspire people and change the way they think about what's possible and what's impossible," says Reichert of Team Atlas.

Up, Up and Away

At the end of August, the Gamera and Atlas teams both schedule a week of test flights — Gamera at an indoor track, Atlas at an indoor soccer field.

The Canadians hope the week will bring Atlas's first takeoff. They're eager to test their design innovation: steering controls that minimize the drift problems that plague Gamera.

The Maryland team seems less enthusiastic. The students are weary, and there's talk that this will be Gamera's last round of flights. After four years, they're nowhere near the Sikorsky Prize's height requirement.

"We're probably not going to hit 10 feet," Weiner says. "We're going to really try, but it's going to be difficult." 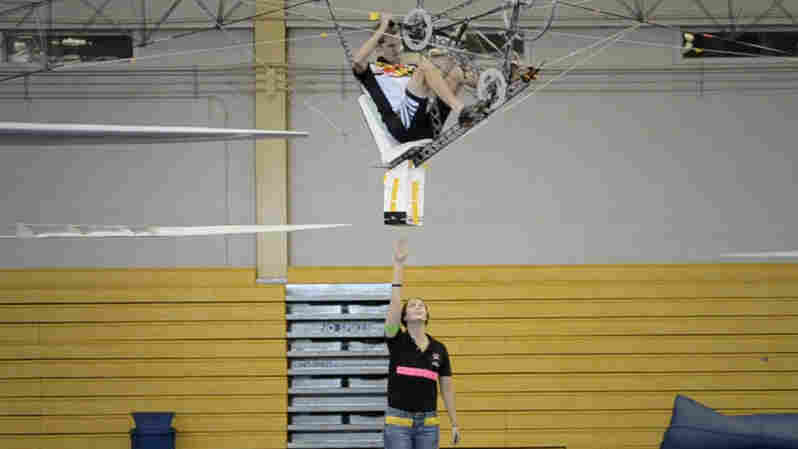 With Enerson in the cockpit, Gamera reaches an altitude of 8 feet. Elizabeth Weiner, the human ruler, stands below. Team Gamera hide caption

Just in case, Weiner transforms herself into a human yardstick, decorating her shirt and pants with colorful tape at 1-foot intervals. Bowen-Davies tells Enerson he'll be ecstatic if the pilot reaches 5 feet — a respectable foot-and-a-half higher than the team's record.

Enerson hops in the cockpit, clips in his shoes and starts pedaling. He easily sails past the previous record, hits 5 feet, then keeps going. Weiner, standing on tip-toe with her hand stretched upward, can't reach the craft. They make it to 8 feet before drifting back down.

"That's really flying!" Bowen-Davies exclaims. "We wanted it to happen, but we thought, 'Maybe it's not going to be us.' But now, there's no reason we can't do it."

For the first time, the Sikorsky Prize seems within reach. 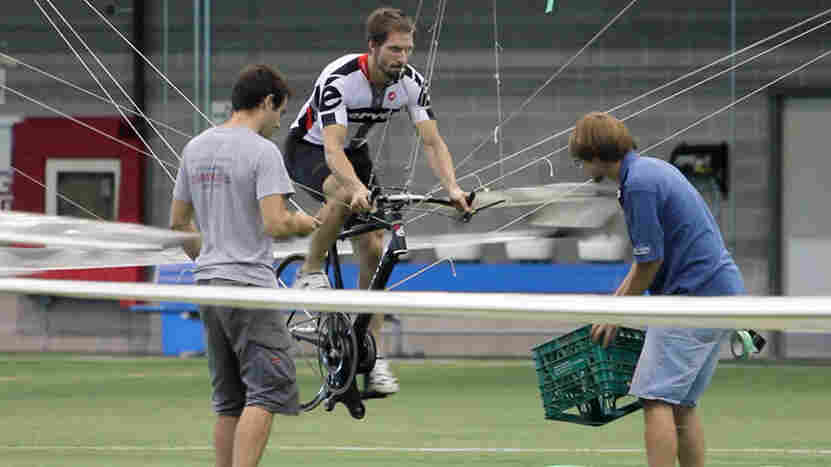 Back in Ontario, on the same day, Team Atlas has a triumph of its own: getting off the ground for the first time.

But it faces an extra challenge. The team can rent the field only during the day, so every night, it dismantles the craft, and the next morning, rebuilds it. It's difficult to make the adjustments Atlas needs.

Both teams are already redesigning and rebuilding. There is no talk of quitting now. They still have their eyes on the Sikorsky Prize.

In September, Reichert and Robertson took a break from chasing the Sikorsky Prize to race superlight bikes at Battle Mountain (Reichert holds the collegiate human-powered land speed record) and then to appear on Mythbusters. They say they'll be back working on Atlas soon. The University of Maryland's Team Gamera headed back to the drawing board as school started; it's gearing up for another round of flight tests this winter.