Accessibility links
Florida's Dozier School For Boys: A True Horror Story Forensic anthropologists are working to find the unmarked graves of the 81 boys known to have died at a notorious reform school in the Florida Panhandle. The school was known for the rough treatments juvenile delinquents received there — including severe bearings and other abuse. 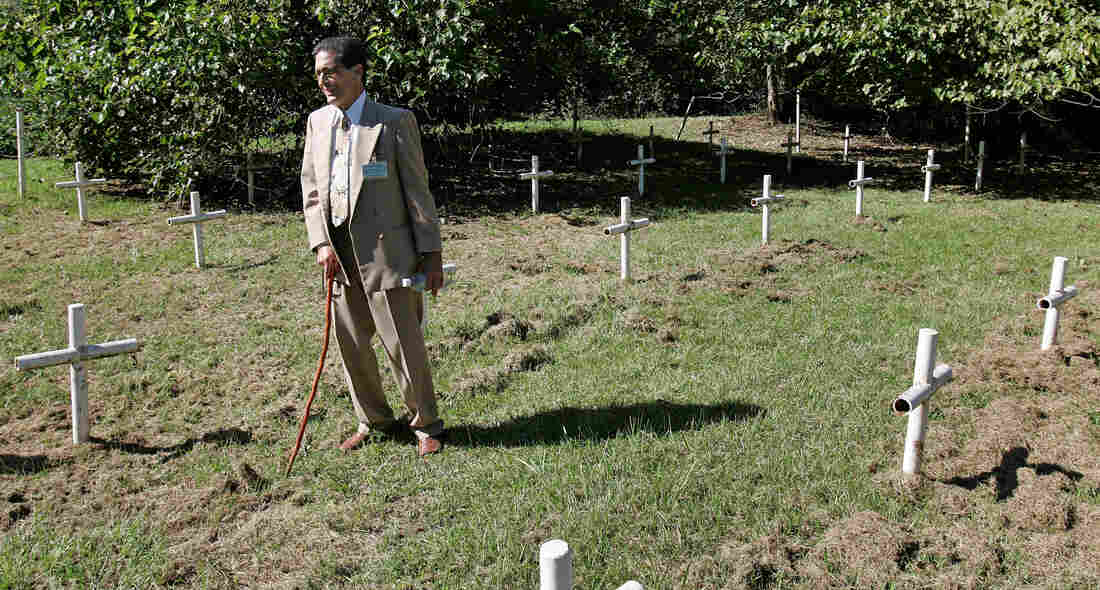 Dick Colon, one of the White House Boys, walks through grave sites near the Dozier School for Boys in Marianna, Fla. Several men who suffered abuse and severe beatings believe the crosses mark the graves of boys who were killed at the school, victims of punishments that went too far. Phil Coale/AP hide caption 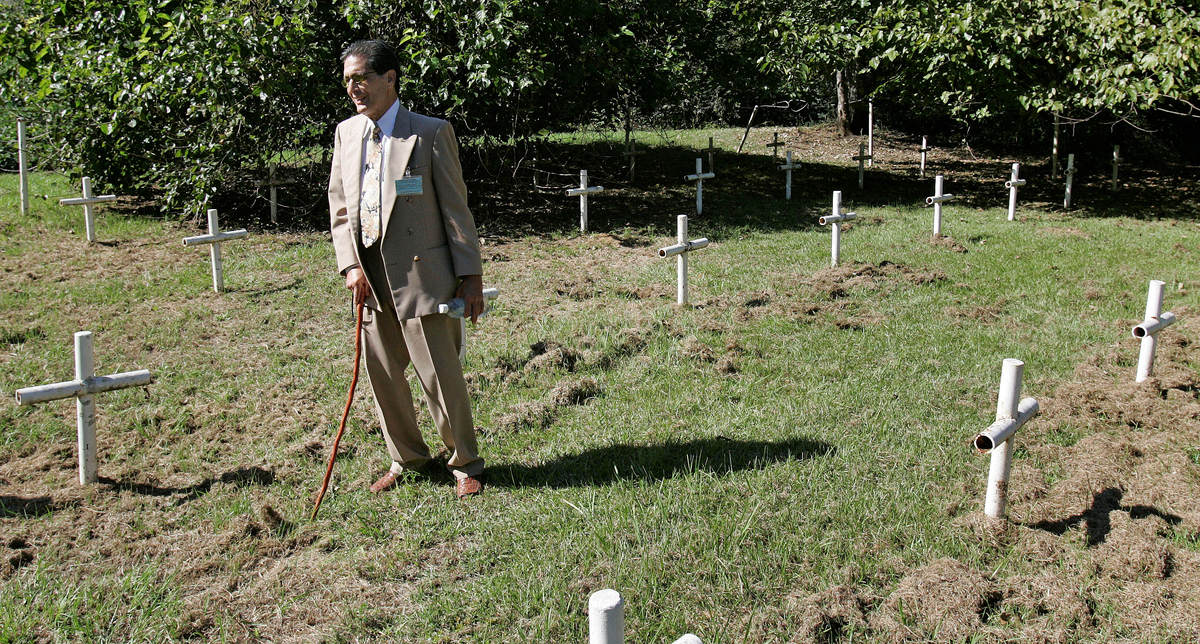 Dick Colon, one of the White House Boys, walks through grave sites near the Dozier School for Boys in Marianna, Fla. Several men who suffered abuse and severe beatings believe the crosses mark the graves of boys who were killed at the school, victims of punishments that went too far.

Over the past decade, hundreds of men have come forward to tell gruesome stories of abuse and terrible beatings they suffered at Florida's Dozier School for Boys, a notorious, state-run institution that closed last year after more than a century.

Known as the "White House Boys," these 300-some men were sent as boys to the reform school in the small panhandle town of Mariana in the 1950s and 1960s. They have joined together over the years to tell their stories of the violence administered in a small building on the school's grounds they knew as the White House.

Some 81 boys are known to have died there, but where their remains are buried is a mystery that researchers are now trying to solve.

"You didn't know when it was coming," says Jerry Cooper, who was sent to the school when he was 16. "These were not spankings. These were beatings, brutal beatings."

Cooper is 67 now. He was sent to what at the time was called the Florida School for Boys in 1961. He'd been running away from home and hitchhiking when he was picked up by an AWOL Marine driving a stolen car.

A county judge charged him with car theft and sent him to the school. Some of the kids like him were charged with crimes. Cooper says others were there for running away from home or because they didn't have families. 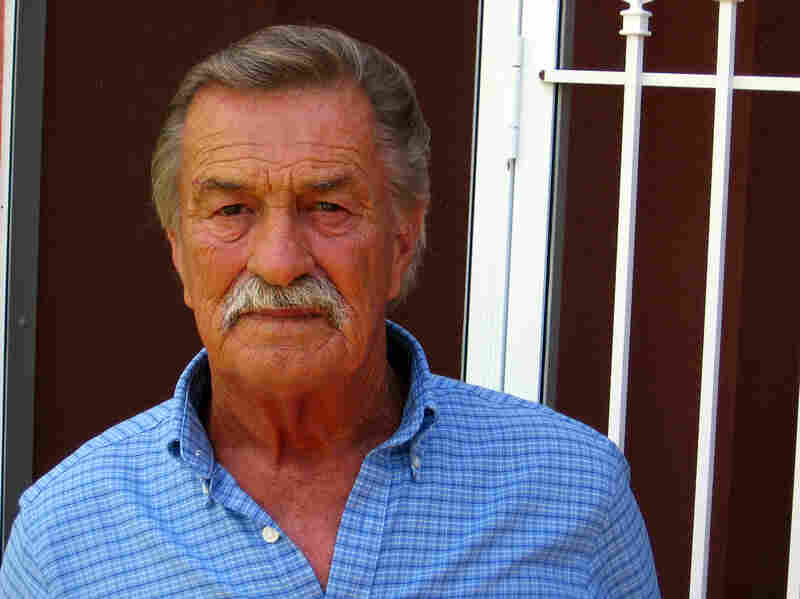 Jerry Cooper, now 67, was 16 years old in 1961 when he was sent to what at the time was called the Florida School for Boys. He witnessed and received brutal beatings by the administration there. Greg Allen/NPR hide caption 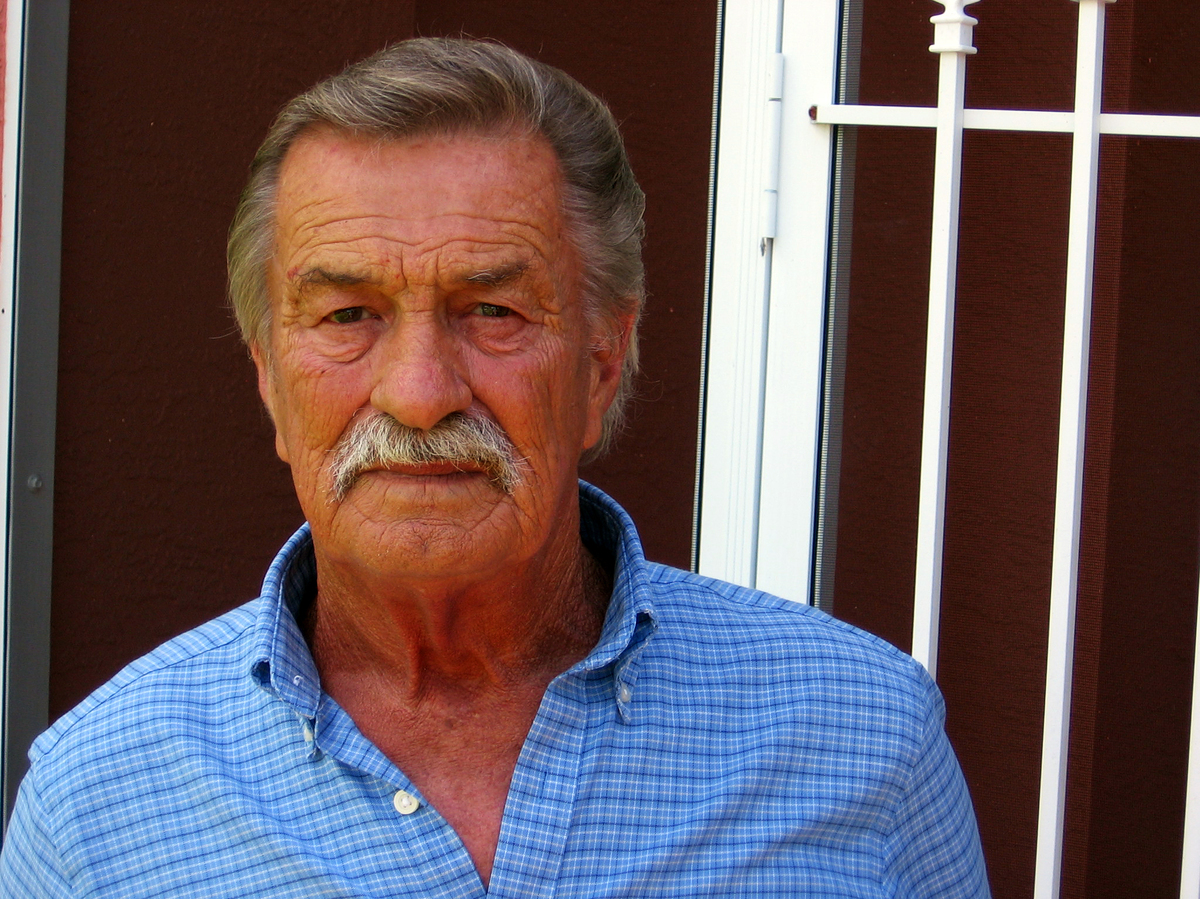 Jerry Cooper, now 67, was 16 years old in 1961 when he was sent to what at the time was called the Florida School for Boys. He witnessed and received brutal beatings by the administration there.

"A lot of orphans were there that did not have places at times and they were sent to Marianna. They weren't there for any crime whatsoever," Cooper says. "But we had many, many boys who was there for smoking in school, that were incorrigible. We weren't bad kids. We might have needed help in some respect. But that wasn't the place to find it, I'll tell you that right now."

A History Of Brutality

The Dozier School for Boys has been known by several names. It opened in 1900 as the Florida State Reform School on 1,400 acres west of Tallahassee. Throughout its history, the school was known for its harsh conditions and brutal treatment. Over the years, a succession of reports and commissions called for reforms, but little changed.

Cooper says he did his best to stay out of trouble, but after several weeks, he learned about the beatings firsthand. School staff got him out of bed at 2 a.m. one day and took him to the White House where he says they threw him on a bed, tied his feet and began beating him with a leather strap.

Cooper passed out, but a boy in the next room later told him he counted 135 lashes.

We weren't bad kids. We might have needed help in some respect. But that wasn't the place to find it, I'll tell you that right now.

As incredible as it may sound, Cooper's story is not uncommon. There are dozens of White House Boys with similar tales of beatings they received at the school in the 1950s and '60s. Several years ago, they began telling their stories in newspaper accounts and TV reports.

Florida's former Gov. Charlie Crist ordered a state investigation into the allegations of abuse, torture and deaths alleged at the school. The Florida Department of Law Enforcement interviewed the White House Boys and former staff but said it couldn't find enough evidence to support the allegations.

"It all boils down to civil liability," says Roger Kiser, a White House Boy who helped form the group and who has written about his experiences at the school in the late 1950s. "They do not want anybody to be able to have factual evidence that would make them pay for these — what I consider to be crimes."

The state report also found no evidence indicating a staff member was responsible for any student deaths. Kiser doesn't accept the state's conclusion.

"There's just too many stories," Kiser says. "I know of one that I personally saw die in the bathtub that had been beaten half to death. I thought he'd been mauled by the dogs because I thought he had ran. I never did find out the true story on that. There was the boy I saw who was dead who came out of the dryer. They put him in one of those large dryers."

State investigators said that using school records, they were able to identify 31 former students interred in the school cemetery. Records show 50 other boys also died at the school, with no indication of where most are buried. 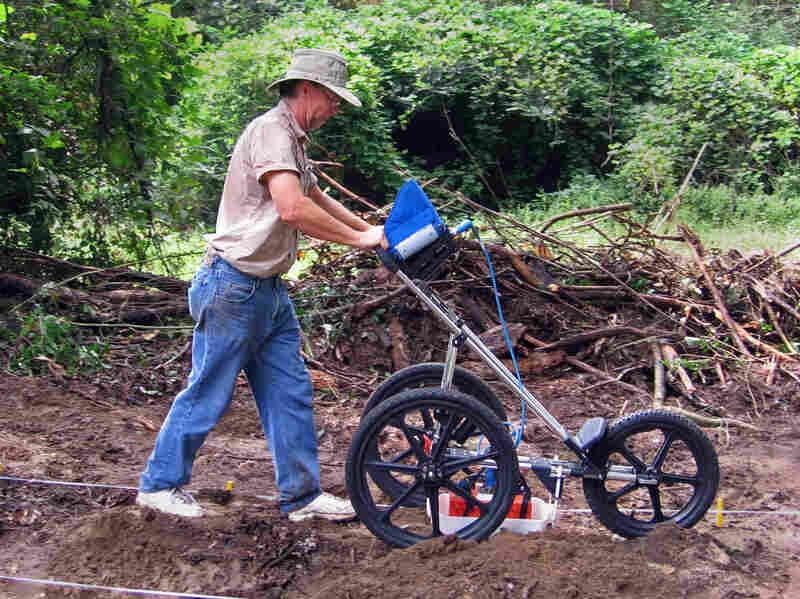 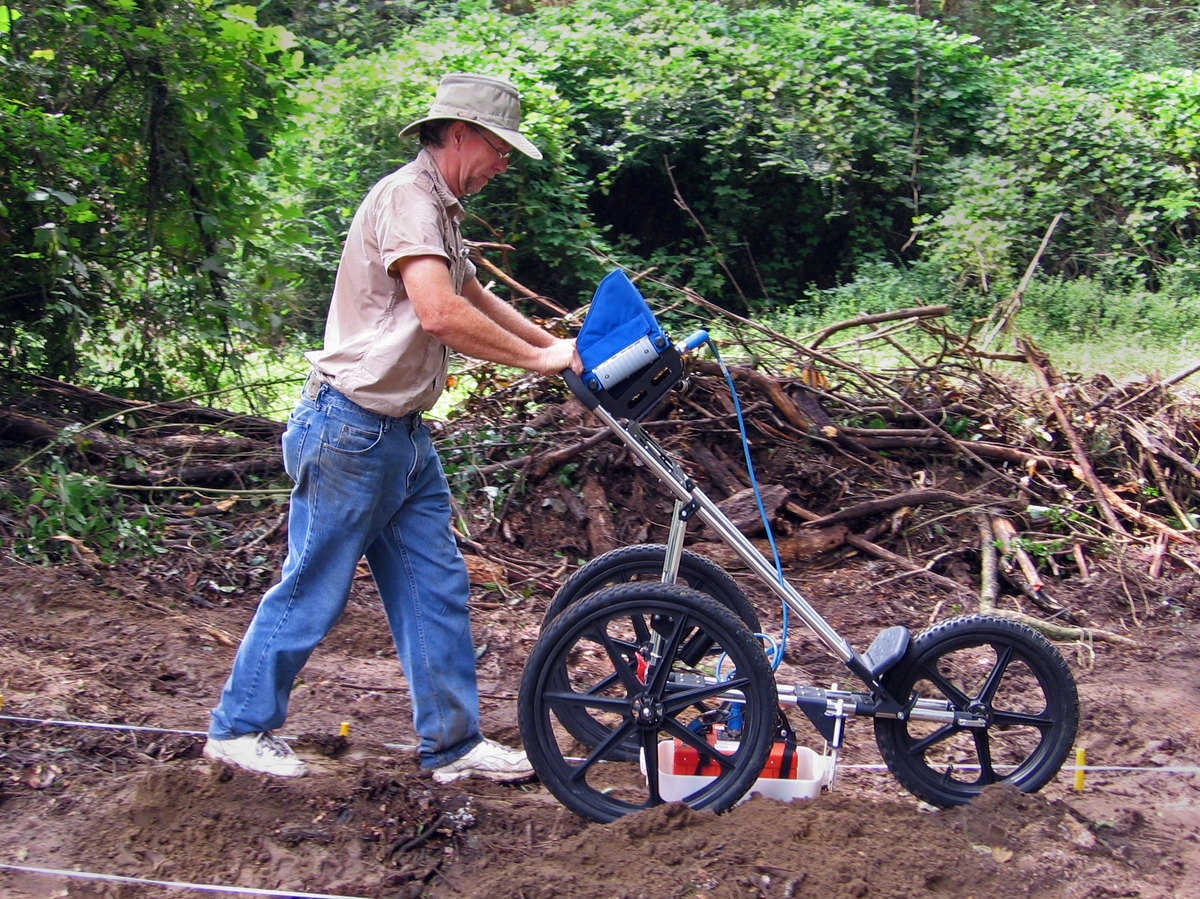 But in recent months, researchers from the University of South Florida have been spending time on the school grounds, working to answer some of those questions.

Like a farmer driving a high-tech plow, archaeologist Richard Estabrook pushes cart-mounted ground penetrating radar equipment over an area near the school's old cemetery. Instead of crops, Estabrook is plowing for data — information that identifies gravesites.

He stops pushing for a moment to show what appears as wavy lines on his equipments' screen — signs he's found another grave.

"This sort of disturbance as it goes down there?" Estabrook says, pointing to the monitor. "That's the classic indication of a grave shaft."

Forensic anthropologist Erin Kimmerle is leading the research at the Dozier school. She's an associate professor at the University of South Florida who became interested in the case after hearing the White House Boys' stories.

At the cemetery — just a clearing in the woods near the school — there are 31 crosses to mark those buried here. But in that section and in surrounding areas, Kimmerle has already identified 49 grave sites. Some, she says, may contain more than one person.

Kimmerle says one question remains hard to answer: Why are there no records of where any of the boys who died at the school are buried?

"When you look at the state hospital, the state prisons, the other state institutions at the time, there are very meticulous plat maps you can reference," Kimmerle says. "Or if you are a family member today, you can say, 'Where is my great-aunt buried?' and they can show you exactly where. So, why that didn't happen here, I don't know. But that does stand out."

Kimmerle says identifying who's buried in the graves would require exhuming the bodies — something that can be done only if a family member of one of the deceased requests it.

That's where Glen Varnadoe comes into the story. 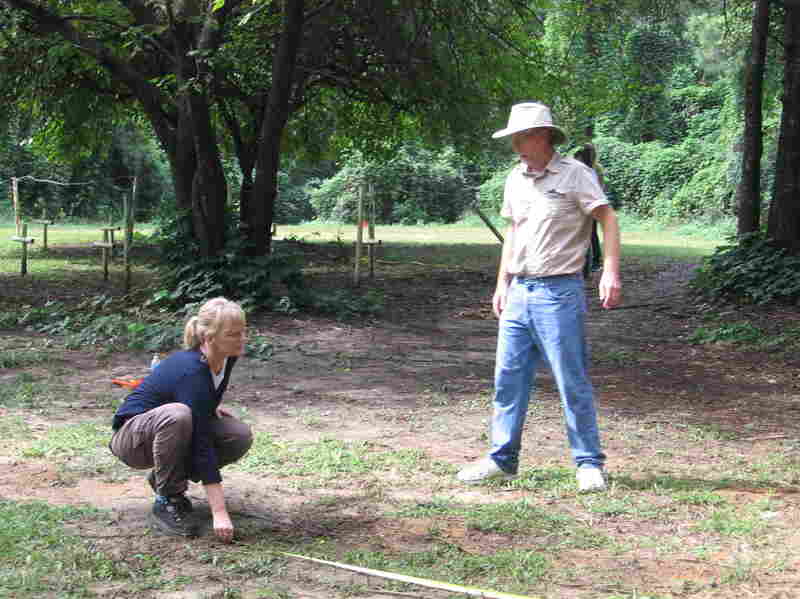 In their search for graves, Estabrook and forensic anthropologist Erin Kimmerle lay out a grid at the school cemetery. Greg Allen/NPR hide caption 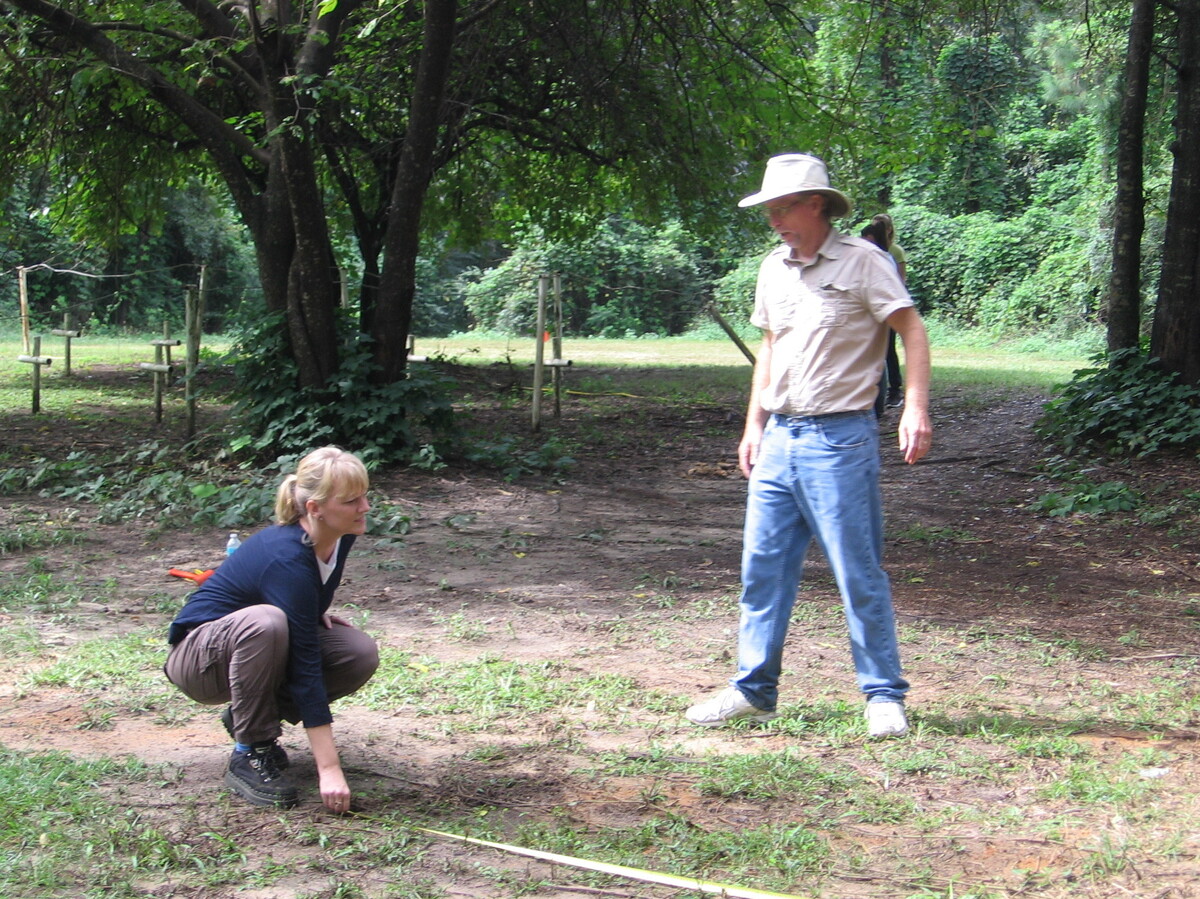 In their search for graves, Estabrook and forensic anthropologist Erin Kimmerle lay out a grid at the school cemetery.

Laying An Uncle To Rest, A Century Later

Varnadoe is a businessman from Central Florida whose uncle, Thomas, was sent to the school in the 1930s, when he was 13 years old. A month later, he was dead.

Varnadoe wants to exhume his uncle's remains and bring them back for burial in his family's graveyard. He's hoping Kimmerle's research will make that possible. But he believes the cemetery where she's been working isn't the only one on the school grounds.

In the 1990s, Varnadoe visited the school — at that time still open — and asked to see his uncle's grave. He says a school staffer directed him, not to the cemetery where Kimmerle is working, but to another location.

"He took me to a second place and said, "Here's where we think the five kids that died in the fire in 1914 are buried ... your uncle could be buried here."

Varnadoe isn't sure where that second cemetery is located. Kimmerle and many of the White House Boys believe it's on a section of school grounds that's up for sale.

That sale, though, is now on hold. Last week, Varnadoe went to court and secured a temporary injunction that halts the sale until his uncle's remains are found.

"There is absolutely no question and no doubt that people that worked at that facility during the late '80s and early '90s knew then and know now that there are other places on the grounds of that school where children are buried."

After blocking them for months, the state now has agreed to allow Kimmerle and her team access to the rest of the school grounds.

The White House Boys believe Kimmerle's work will help uncover the truth about what happened at the school. Eventually, they hope to receive an apology and compensation from the state of Florida for the abuse they suffered there.