Accessibility links
Candidates' Views On Poverty Get Little Attention Neither President Obama nor Republican Mitt Romney has focused much attention on the poor. They've talked about creating jobs and opportunity, but mostly for the middle class. Advocates say Obama's stimulus spending has helped, but Republicans argue that government aid helps keep people in poverty. 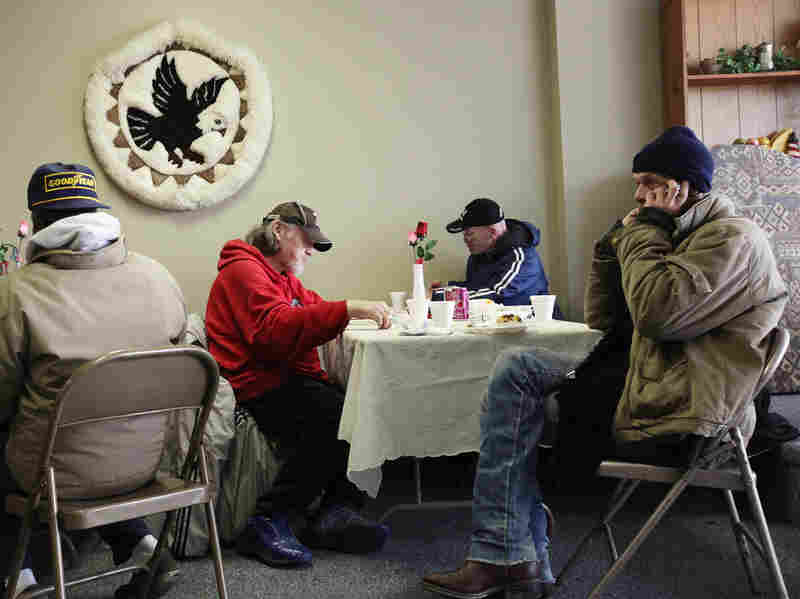 People eat a free community meal at The Center in Lima, Ohio, earlier this year. Although more than 46 million Americans are poor, the issue has gotten little attention in the presidential race. Mario Tama/Getty Images hide caption 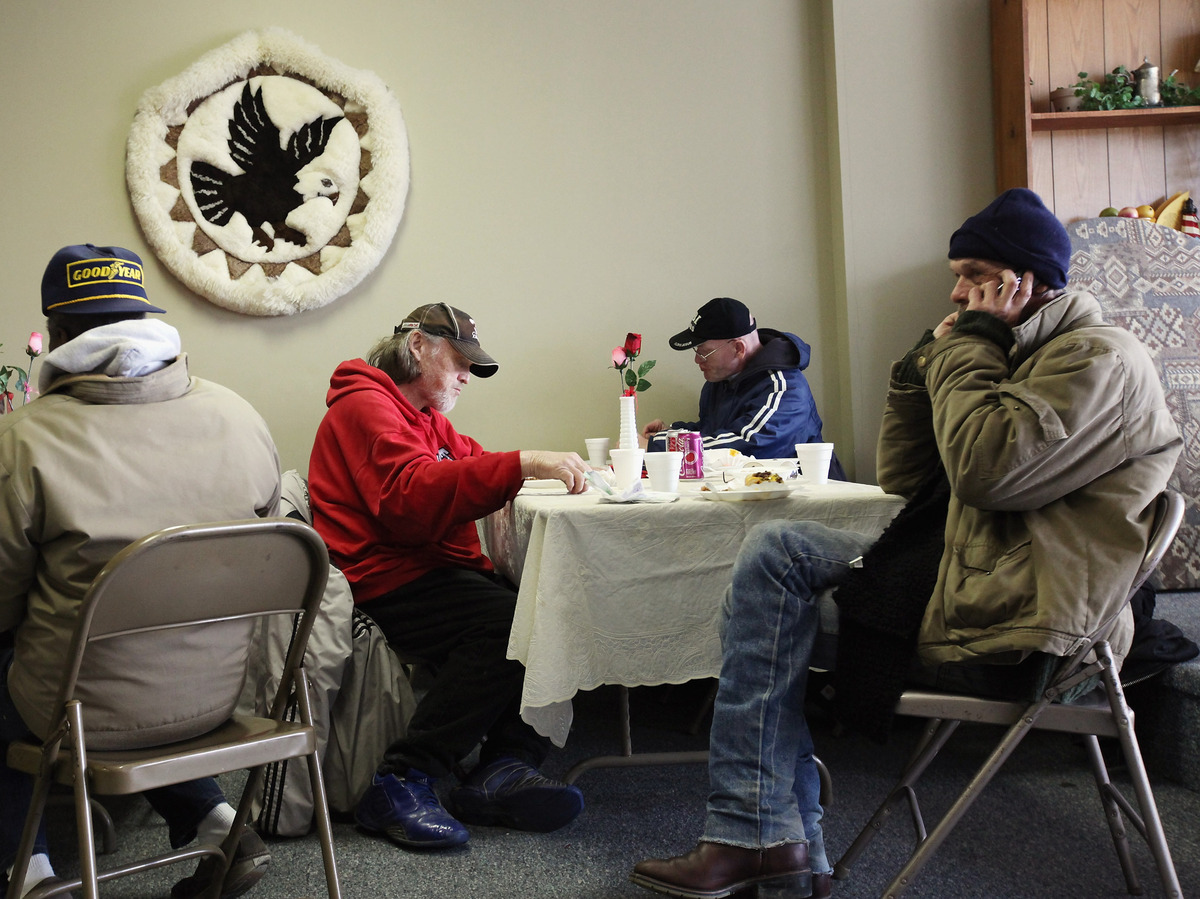 People eat a free community meal at The Center in Lima, Ohio, earlier this year. Although more than 46 million Americans are poor, the issue has gotten little attention in the presidential race.

The nation's poverty rate is as high as it's been in almost two decades. Last year, 1 in 6 Americans was poor — more than 46 million people, including 16 million children.

But on the campaign trail, the issue of poverty has received surprisingly little attention.

When he first ran for president, Barack Obama went to a low-income neighborhood in Washington, D.C., and spoke passionately about hunger and poverty. He repeated Bobby Kennedy's question in 1967: "How can a country like this allow it?"

"The most American answer I can think of to that question is two words: We can't. We can't allow this kind of suffering," then-candidate Obama told the crowd.

But four years later, neither President Obama nor Republican Mitt Romney has focused much attention on the poor. They've talked about creating jobs and opportunity, but mostly for the middle class.

Melissa Boteach heads Half in Ten, a campaign by progressive groups to cut poverty in half in 10 years.

"The problem is that when politicians talk about jobs, they don't talk about how they're going to reach the most vulnerable people who have been out of work for the longest time," she says.

Her group and other anti-poverty advocates are so frustrated by the candidates' lack of attention to the topic, they've launched a Twitter campaign with the hashtag "#talkpoverty." They're trying to get someone to ask the presidential candidates in the debates what they would do to reduce childhood poverty in their first 100 days. So far, they've had no luck.

"When you don't talk about something, it's hard to build the political will to implement it," says Boteach.

Anti-poverty advocates say they're especially disappointed because they think Obama has a very good record to run on. They credit him with keeping millions of additional people out of poverty during the recession with stimulus spending on things such as expanded tax credits for low-income families, unemployment insurance and food stamps. And they note that his health care law will extend Medicaid coverage to millions of additional poor people.

"So that suggests that as we go forward, he's going to be able to do more," says Atlanta Mayor Kasim Reed, a strong Obama backer. "He has been a fierce defender of the Pell Grant program, which helps working folks access secondary education. He's focused on our technical colleges and two-year universities."

And indeed, campaign aides say this is the president's plan to help the poor — that he's trying to build what he calls "ladders of opportunity" to lift people into the middle class. He spoke of those plans in his acceptance speech at the Democratic convention this summer.

"We believe the little girl who's offered an escape from poverty by a great teacher or a grant for college could become the next Steve Jobs, or the scientist who cures cancer or the president of the United States — and it is in our power to give her that chance," Obama told the crowd.

But Republicans say one only has to look at the high poverty rate to see that Obama's approach has not worked.

"If someone's in poverty, what do you do about it?" asks Kevin Hassett, an economist with the American Enterprise Institute and a Romney adviser. "What you do is you fix the economy."

Hassett says Obama's plan is largely to expand government aid, but he says it's this spending that's helping to keep the poor in poverty.

"We've got people in poverty that can't find a job [and] that have to rely upon the government safety net, which should be there to protect them," he says. "But the reason they have to rely on the government safety net is that we have a president that hasn't thought, 'Geez, you know, being the highest corporate tax place on Earth is a bad idea.' "

Hassett says Romney would cut those taxes and the size of government so that the private sector has more money to create jobs. Still, Hassett says the Republican presidential candidate is committed to preserving the safety net for those who need it.

But in a recent video he made for faith-based anti-poverty groups, Romney also said this: "A strong economy will reduce our budget deficits, and it will reduce poverty as well. But at this point, budget cuts are also going to be necessary, and I intend to make them."

Romney says he supports means testing so safety-net benefits will go to the neediest Americans, and he'd like to add work requirements for such aid. He also wants to turn programs like Medicaid and job training into block grants for the states, so they can shape them to better fit their needs.

He says that's needed to strengthen the overall economy. Obama supporters argue that it will inevitably mean a lot less funding, and fewer poor people getting help.