Accessibility links
6 Things Surnames Can Say About Social Mobility Here, some takeaways from new research that finds that families rise and fall across generations at a much slower rate than anyone thought. For example, the research finds that French-Canadian immigrants are a disadvantaged minority in the U.S. 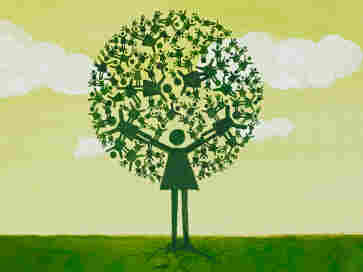 Using data on surnames dating back almost 1,000 years, economic historian Gregory Clark says he's found evidence that families rise and fall across generations at a much slower rate than anyone previously thought. And he says that rate remains constant across national boundaries and time periods.

Clark is writing a book about his research, and he says he's still working out some of his conclusions, but here are six possible takeaways from what he's found so far:

1. Some names are more informative than others. Much of Clark's research comes from rare surnames. In some cases, only a few dozen people might have the name in any country. Names like Bazalgette or Pepys are very elite names in England. But extremely common names also tell Clark a lot. Names like Smith or Baker started out as working-class names. Using the records at Oxford and Cambridge, Clark was able to figure out when those names reached average representation among the elites. You can also use names to identify minority groups. For example, 90 percent of people in the United States who have the name Washington are African-American. But not every name is interesting. I asked Clark to look at my name. We found out that there is nothing special about Dwyers.

Movin' On Up? That May Depend On Your Last Name

2. Swedish bus drivers have it made. Part of the reason Clark's data is so different from what other researchers have found is that income is not always a good measure of a person's status. For example, many previous studies have shown that Sweden has a high level of mobility compared with other countries. Clark says that's because Sweden has much less income disparity. On average, Swedish doctors make less money than doctors in the U.S., and Swedish bus drivers make more. Clark's point is, in terms of class standing, a bus driver is a bus driver. Still, if you're a Swedish bus driver, the extra income probably seems like a good thing.

3. India is the outlier. Clark's research shows a remarkable consistency for social mobility rates around the world, with one exception: India. Families in India seem to be stuck in their class group for longer than in other countries. The obvious explanation for this is India's historic caste system. Clark looked at surnames in West Bengal and found that policies to undo the effects of the caste system have helped some groups. But the overall rate of mobility is still very low compared with the rest of the world. Clark believes that's because people in India still tend to marry within their class group.

4. The effects of slavery in the U.S. will finally fade away — in a few hundred years. By showing that social mobility happens much more slowly than previously thought, Clark makes a strong case for why the effects of slavery are still with us. The good news in Clark's research is that African-American families seem to be climbing the social ladder as quickly as other groups in the U.S. today. But his model predicts it will take a long time before we can say we've actually moved beyond slavery. It might happen sometime in the 2300s.

5. French-Canadian immigrants are a disadvantaged minority in the U.S. Clark says there was a substantial immigration of French-Canadians into the U.S. in the late 19th and early 20th century. This is a distinct group from the descendants of French immigrants you might find in Louisiana, and Clark says you can track them through names like Gagnon, Hebert and Cote. "Only half as many people from French-Canadian origin are doctors than you would expect," Clark says. "Half as many are attorneys." This leads to one of the benefits of using surnames to track status, according to Clark. "You can discover kind of underprivileged groups within a society that people in general would probably not even have recognized," he says.

6. Your ancestors may determine your fate, but you still need to get out of bed in the morning. "Social mobility in some sense, it gets to one of the fundamental things that we think about," says Clark. "Which is, what is the nature of human agency, and what is it to be a person in a society where eventually a lot of things may just be predictable about us?" Clark says that as much as 60 percent of your outcome in life may be determined by your lineage. To some, that's a depressing number. But, remember, Clark is describing a model within which there can be a lot of variation. And even if you come from a long line of rich doctors, you still have to do the work if you want to be a doctor too.