Accessibility links
Turks Fear What Syria's War Will Bring The Turkish government has turned against Syria, but for the Turkish people who live along the Syrian border, it can be complicated. Many have relatives and other ties in northern Syria, and don't see a happy ending to the violence there. 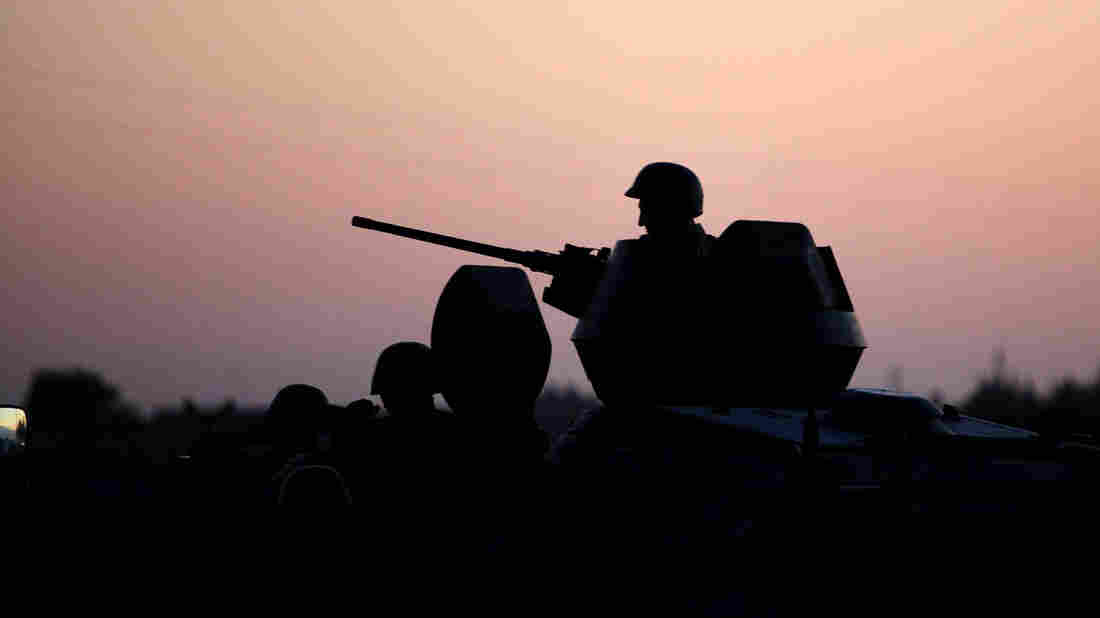 In Turkey's southern Hatay province, it is harvest time — the second harvest since the uprising began in neighboring Syria.

In the village of Hacipasa, Turkey, located right along the Syrian border, children play alongside tents on the edge of the farm fields. The tents belong not to Syrian refugees, but to Turkish farmworkers helping to bring in the cotton, tomatoes, peppers and pomegranates waiting to be harvested.

As the autumn morning fog burns off the Syrian hills just across the Orontes River, the sound of gunfire and a Syrian military helicopter signal that another day's bloodshed is resuming in the embattled Syrian village of Azmarin.

On the Turkish side, three flop-eared goats sit in a field, and a tethered horse and foal nibble at the brush, while across the border the helicopter circles Azmarin before striking.

Residents of Hacipasa line the fields, gesturing to the plume of smoke rising from the Syrian side. This isn't a spectator sport — many of the families on the Turkish side have relatives in Syria. They wait for the calls from the river announcing more refugees fleeing the violence.

The refugees bring stories of bodies lying in the streets, and no respite from the shells and gunfire. Ahmed Juha, a 34-year-old Syrian, says he won't stay long in Turkey, despite the horrific scenes in his small village near Azmarin.

"The situation is very bad there," Juha says. The Syrian army "stormed in and started killing people, not just the [rebels]. They shot 15 people in the mosque, and then the helicopter bombs came."

An elderly man gestures to a reporter to sit and have tea. He wants to talk about how difficult it's been here lately, but just then a car pulls up, and the mayor gets out to discuss arrangements for the wedding of the old man's son.

The mayor doesn't want to talk about the Turkish government's Syria policy. But his driver, a 46-year-old man named Latif Fansa, has no such qualms.

"They say [President Bashar] Assad is a dictator, but our prime minister is an even bigger dictator," Fansa says, referring to Turkish Prime Minister Recep Tayyip Erdogan.

"He's just following orders from the U.S.," the driver adds. He says the American policy "is driving Turkey into a sectarian conflict" with various ethnic groups in Syria.

Fansa has relatives from Aleppo, in northern Syria, and he says that one relative who just came from there says there's nothing left that's recognizable as the beautiful and historic old city.

"It's a disgrace for all humankind, not just for Syria or Turkey," he says. "It is a disgrace that the world allowed that beautiful city to be destroyed. World leaders should fight for peace, but it seems we have no leaders right now."

Not long after that interview, word came from Aleppo that the historic 13th century Umayyad mosque had been set ablaze.

The complex social mix in Hatay province is also coming into play; most notably, the Turkish Alawite community sympathizes with Syria's Alawites, led by Assad and his family.

A small but vocal demonstration in Antakya, Turkey, recently denounced the country's ruling AK Party and Turkey's ties to the U.S.

Ali Yeral, head of an Alawite cultural foundation in Antakya, says many of the people he talks with have no doubt that the Syrian uprising could be a disaster for Syria's Alawites, Christians and Shiites.

He says people have seen videos of al-Qaida fighters in Syria, and that one showed a fighter saying, "As soon as we finish Assad, we'll come back and kill all the Alawites and the other minorities." It is no wonder people are concerned, he says.

Some opposition groups are working hard to prove such fears unfounded, but as the violence rages on along the border, Turks living here are having a hard time seeing a happy ending to this struggle.