Accessibility links
5 Questions 'Real' People Might Ask At The Debate With the election just three weeks away, many voters are still scratching their heads, wondering what exactly the candidates would do to improve the economy. Audience members at Tuesday night's presidential debate could focus on economic topics such as home prices, gasoline, wages, exports and jobs. 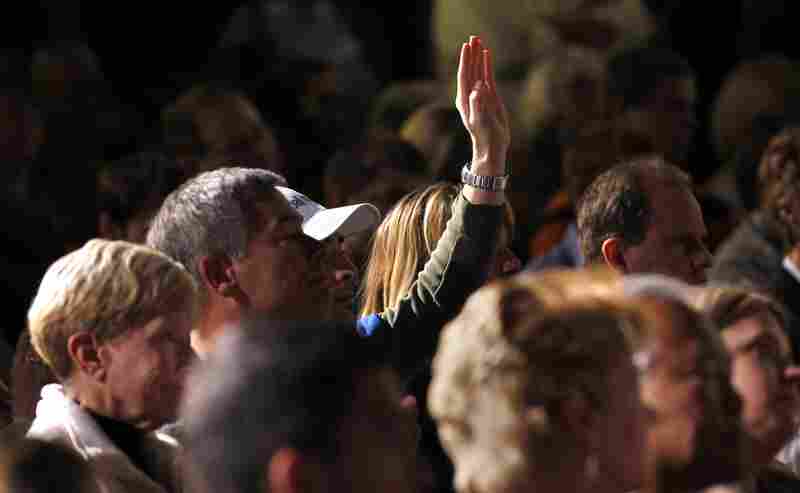 An audience member holds up his hand at a Mitt Romney town hall meeting in Dayton, Ohio, in March. Audience members will be allowed to ask questions at the second presidential debate, being held Tuesday night in Hempstead, N.Y. Gerald Herbert/AP hide caption 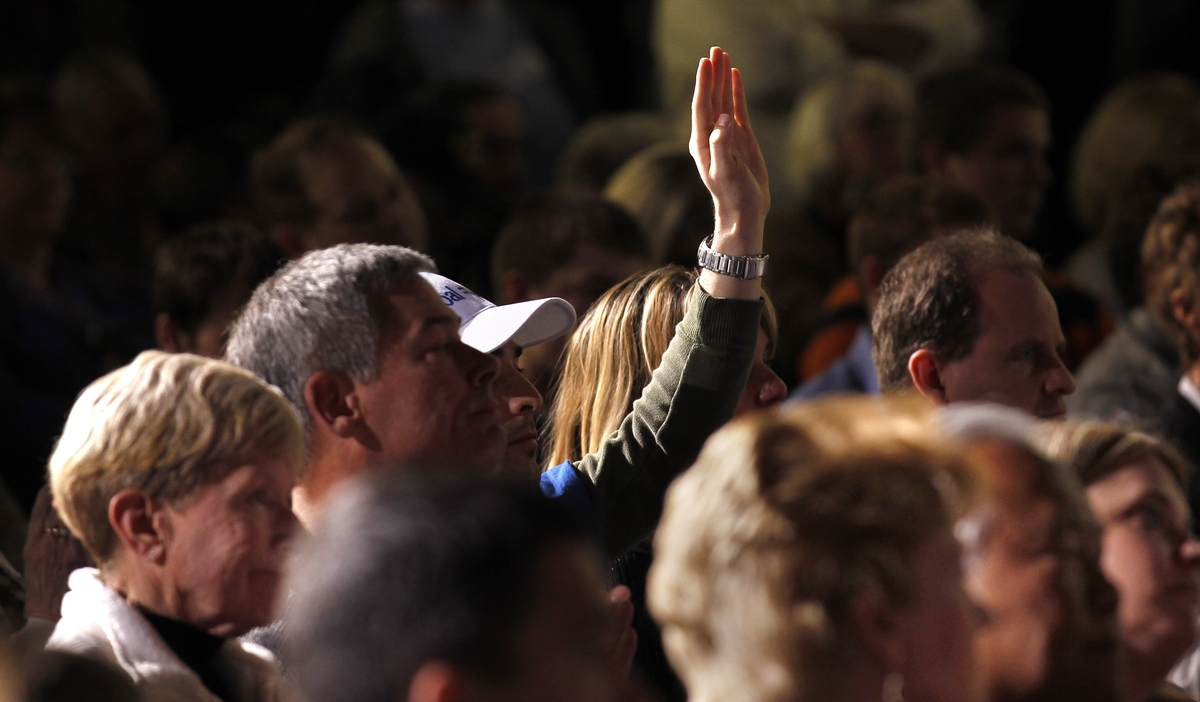 An audience member holds up his hand at a Mitt Romney town hall meeting in Dayton, Ohio, in March. Audience members will be allowed to ask questions at the second presidential debate, being held Tuesday night in Hempstead, N.Y.

As this election year began, political pundits insisted the No. 1 issue would be the economy. They expected the candidates to offer voters detailed plans for encouraging job growth.

Now, with the election just three weeks away, many Americans are still scratching their heads, wondering what exactly President Obama and former Gov. Mitt Romney would do to improve the economy.

During the first presidential debate, the moderator did little to nail down details on the topics that matter most to average people, such as home prices, gasoline, wages, exports and jobs. At tonight's televised town hall meeting at Hofstra University in Hempstead, N.Y., at least a few voters will have a chance to ask questions to clarify differences between the candidates on "real" economy issues.

Here are five topics that many Americans would like to hear more about:

The housing sector has been in a depression since 2007. In recent months, some indicators have been turning up, but construction spending is still mostly moving sideways, and home prices generally remain far below 2006 levels.

Romney has not said much about foreclosures and the home-price crash, except in a Las Vegas Review-Journal interview when he said: "Let it run its course and hit the bottom."

Obama disagreed, saying in his State of the Union address in January that "responsible homeowners shouldn't have to sit and wait for the housing market to hit bottom to get some relief." He has backed modest programs to slow foreclosures, such as the Home Affordable Modification Program (HAMP) and the Home Affordable Refinance Program (HARP).

Obama Vs. Romney: The Presidential Candidates Set For Round 2

Question No. 1: Given how long the housing crisis has dragged on, is there something more you and the Congress could be doing to help? Please be specific.

This year, consumers have seen crazy swings in gasoline prices, with the average price per gallon shooting up from about $3.25 as the year began to $3.92 just three months later. Then the price fell again, rose again and now is back around $3.75.

It's tough to set a household budget when you never know how much you're going to pay at the pump. Both candidates agree Americans are too dependent on oil from the Middle East, a region where political instability contributes to price volatility.

"The plan is to control more of our own energy," Obama says.

"I'm going to take advantage of our energy resources and get us energy independent," Romney says.

Question No. 2: Every president since Jimmy Carter has been talking about making us energy independent. Is it just beyond the power of a president to do anything about gasoline prices, or do you have a plan that is different from all of those past presidents?

Food experts warn that grocery prices could be headed higher. Breakfast — an important meal for children — is already costing more, with retail prices going up for eggs, bacon, orange juice and milk.

Meanwhile, wages are hardly growing at all. Lots of families already have cut back on their driving, cancelled newspapers and clipped coupons. But until they get raises, budgets are tight.

Question No. 3: Is there anything a president can do to help get U.S. wages moving up again?

Both Obama and his Republican challenger say they want to boost U.S. exports. Selling more goods overseas certainly would be helpful to many U.S. factories.

"Where other nations are now competing, I want to make sure our goods can go throughout the world," Romney says.

Question No. 4: You each have expressed support for trade pacts. But since a free-trade agreement with South Korea took effect March 15, imports from South Korea have been surging, far outstripping U.S. exports to that country. In fact, our trade deficit with South Korea is up nearly 25 percent so far this year. Why do you want more free-trade deals?

About 3.6 million jobs are open right now in this country. At the same time, about 12 million people are looking for work but getting turned down. Many employers say job seekers just don't have the right skills for the available openings.

Both Obama and Romney say they want to fix that mismatch by upgrading workers' skills.

"I'm going to make sure we have the kind of training programs that give people the skills they need for the jobs of today," Romney says.

"I want to give more Americans the chance to get the skills that they need to compete," Obama says.

Question No. 5: What's the difference between your plans? At a time when Congress must cut spending, how would each of you reduce the skills mismatch?

In the comments section below, please tell us what questions you would ask the candidates.