Accessibility links
Budapest Quartet Gets To The Heart Of Beethoven Among the key pieces of the classical-music repertoire Beethoven's string quartets. Recordings by the Budapest Quartet are essential to critic Lloyd Schwartz. 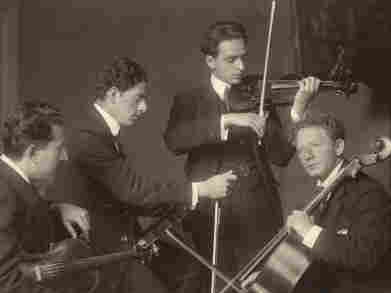 The Budapest String Quartet has always been my standard-bearer for chamber music. I grew up listening to their recordings, and especially admired not only their gorgeous sound, but also the uncanny interaction among all four players, even when there were changes in personnel. They had a way of playing as if they were speaking to each other, expressing deep and sometimes complicated feelings.

One of my most memorable concert experiences was the only time I ever heard the Budapest in person, when I was 20. The concert was sold out, but the management decided to sell seats on the stage. It was like being in a room and overhearing an enthralling conversation only a few feet away.

I learned the Beethoven quartets under two remarkable circumstances. I took an amazing course on the quartets in college, directed by the great violinist and historian Boris Schwarz (no relation). Instead of playing recordings, he assembled a string quartet from the faculty with himself on first violin. Each musical illustration was presented by the live musicians, and after each lecture, the group would play the entire quartet. One summer, my undergraduate mentor invited me to house-sit at her Greenwich Village studio while she was on vacation. I wouldn't have to pay rent if I promised to listen to her recordings of the Budapest Quartet playing Beethoven.

The Beethoven quartets are, maybe along with his 32 piano sonatas, a kind of lifelong spiritual autobiography. Like Shakespeare, Beethoven starts out by showing his influences while he is already striking out on his own, keeping well within the old 18th-century formal boundaries but leaving behind the sublime nuances of Mozart and the refined wit of Haydn for a new Romantic energy. When he returns to quartet writing in the middle of his career, his ambitions are more vast. He expands the very nature of the string quartet. The works are denser and grander yet more personal, like Shakespeare's dark comedies. Near the end of his career, Beethoven completes five more quartets, and these so-called "late quartets" rank among the most extraordinary compositions in all of music — longer than any previous string quartet, infinitely more complex in form as well as in content. The quartet No. 15 in A-minor became the model for T.S. Eliot's great poetic meditation on time, the Four Quartets. One of the quartets is in seven movements, instead of the usual four. One movement — a Great Fugue — is so convoluted and intense, it's on the edge of atonality, and it's so long that Beethoven ended up making it a separate, independent Opus.

There are three complete recorded cycles of the 16 Beethoven string quartets by the Budapest Quartet. My touchstone is still the set they made for Columbia in the early 1950s, playing the magnificent instruments owned by the Library of Congress. This complete series has never been issued on CD in this country. There's also a remarkable series on the Bridge label: live concerts at the Library of Congress between 1940 and 1962. And now, more than 50 years after its original LP release, Sony has finally issued a CD of the studio recordings the Budapest Quartet made in the late '50s and early '60s, in stereo. Some of these performances are less subtle and less purely beautiful than the earlier set, but they have their own large dimension of drama and power and heart, and are equally indispensable.