Accessibility links
Climate Politics: It's Laugh Lines Vs. 'Not A Joke' Stymied by Congress early on in his term while trying to advance his climate policies, President Obama has resorted to taking incremental actions that don't need congressional approval. Mitt Romney doesn't mention climate change in his energy plan, and favors cheap energy sources like coal. 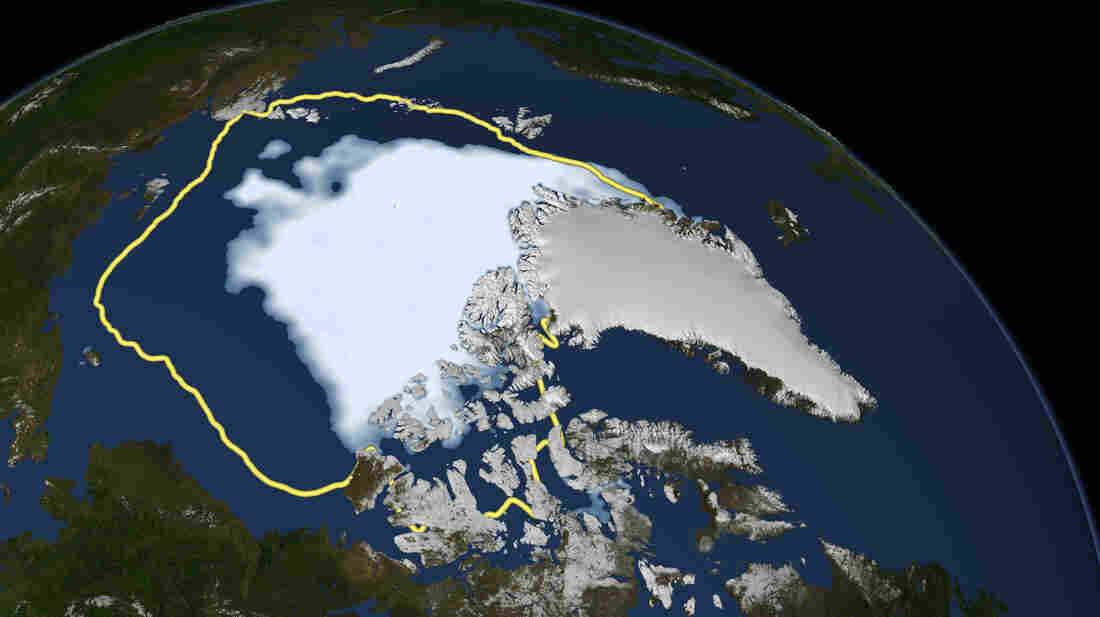 This Sept. 16 image released by NASA shows the amount of summer sea ice in the Arctic, at center in white, and the 1979 to 2000 average extent for the day shown, with the yellow line. Scientists say sea ice in the Arctic shrank to an all-time low of 1.32 million square miles on Sept. 16, smashing old records for the critical climate indicator. NASA/AP hide caption

Scientists view climate change as one of the world's most pressing long-term problems. But the issue has barely surfaced in the U.S. presidential race. President Obama has taken steps to address climate change during his time in office. Republican challenger Mitt Romney would not make it a priority in his administration.

In fact, as Romney stood on the stage to accept his nomination at the Republican National Convention, he used global warming as a laugh line.

"President Obama promised to begin to slow the rise of the oceans," he said, pausing for the applause and laughter to rise, "and to heal the planet."

Romney promised an administration that would instead focus on taking care of American families. Obama rebutted that comment at the Democratic National Convention a week later.

"Change is not a hoax," he said. "More droughts and floods and wildfires are not a joke. They are a threat to our children's future. And in this election, you can do something about it."

In fact, Obama came into office with climate change as one of his major issues. At international talks in Copenhagen, he pledged to reduce U.S. emissions by 17 percent over 2005 levels by the year 2020. At that meeting and since, he pressed to get more aggressive action out of China, India and the world's other biggest carbon dioxide emitters.

But the president's plans didn't make it past strong Republican opposition in Congress. So instead, he has settled for actions the president can take without congressional action.

"First there was the stimulus, which is the largest ever investment in clean energy technology, really hoping to jump-start that sector," says Carol Browner, who is an adviser to the Obama campaign on energy and climate issues, and former administrator of the Environmental Protection Agency. She runs down a quick list of accomplishments: "The first ever greenhouse gas standards for cars, the power plant requirements — proposed new power plant requirements — as well as more efficient appliances."

These don't add up to the 17 percent reduction the president aspired to at the Copenhagen climate talks. Browner says he will keep trying to make incremental changes.

So this is an issue where the candidates sharply disagree.

The president sees action on climate change as creating new jobs in the clean-energy sector.

Romney sees cheap energy as the best energy. He doesn't even mention climate change in his energy plan, which is overwhelmingly about increasing production of fossil fuels.

The Romney campaign would not provide a spokesman for this report. But the campaign's domestic policy adviser, Oren Cass, did address these issues at a debate at MIT, which was webcast by E&ETV.

"Gov. Romney's position on climate change is very straightforward, which is that the United States taking action unilaterally is not able to address what is a global problem," Cass said.

And since China is still building more coal-fired power plants every week, Cass argues that having the U.S. cut emissions is a waste of effort.

He also opposes what was once a Republican-backed idea: Put a price on carbon pollution to encourage the free market to develop technologies that are better for human health and the global environment. He says pricing carbon won't work.

"What it is going to do is hurt our economy very seriously," Cass says, "and is going to drive a lot of industrial activity from the United States to countries that are, frankly, less efficient in their use of energy."

So, in essence, the Romney position is that climate change won't be a priority because it's too hard to solve. The one action the campaign has advocated is spending more federal dollars for research on climate science and renewable energy.

That's a contrast with President Obama, who argues that developing clean energy is good for the U.S. economy — and important on the world stage, where climate change is regarded as a very serious issue.