Accessibility links
Romney's Defense Plans Call For Higher Spending President Obama says he will slow the growth in defense spending. Republican presidential candidate Mitt Romney wants to spend more. Romney says that "peace through strength" will make the U.S. safer. The question, though, is how much more Romney's plan would cost. 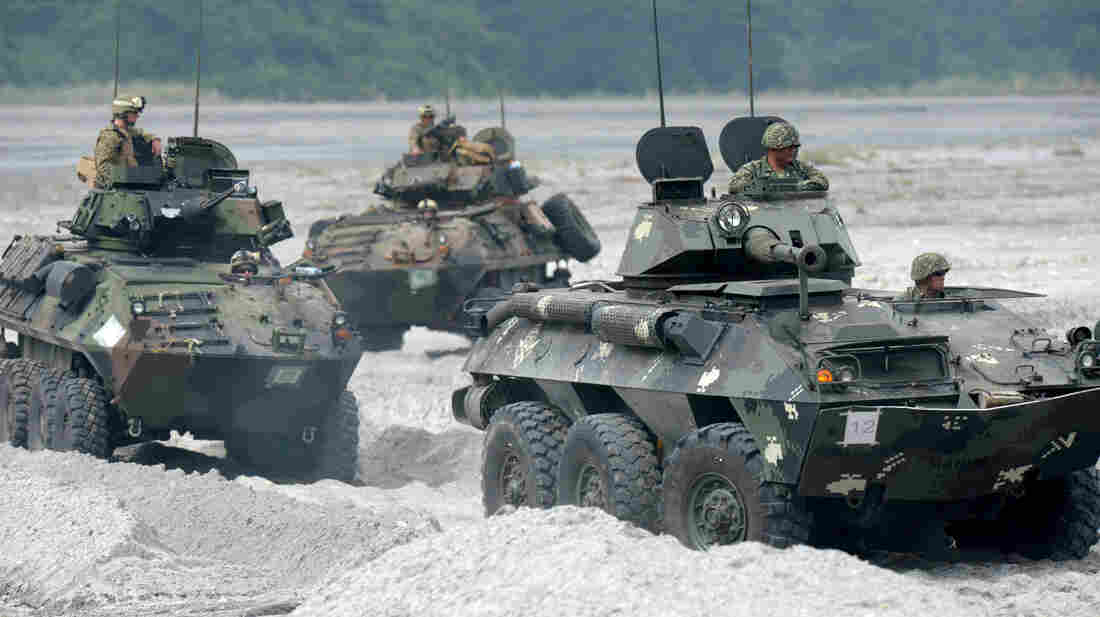 One area where President Obama and Republican presidential candidate Mitt Romney clearly disagree is defense spending. The president wants less, Romney wants more. But the difference in their approaches is about more than money.

When Romney looks at the future, he sees a series of threats: from unrest in the Middle East to a nuclear North Korea to what he sees as a defiant Russia.

Speaking to veterans in Virginia's Fairfax County last month, Romney blamed the Obama administration for cuts that will go into effect unless Congress and the president act.

"And the idea of cutting our military commitment by a trillion dollars over this decade is unthinkable, and devastating," Romney said. "And when I become president of the United States, we will stop it. I will not cut our commitment to our military."

Romney wants to set a floor for defense spending: 4 percent of the gross domestic product should go to the military, he says. That's about where it is now, but in coming years, the president's budget would take it below 3 percent.

In his acceptance speech at the Democratic convention, Obama said that money going to the military is now needed elsewhere.

Paying For The Romney Plan

The Romney campaign says ramping up spending to 4 percent of GDP on defense would cost about $1 trillion more than Obama's current budget. But Todd Harrison of the Center for Strategic and Budgetary Assessments says it would cost more. Even if the government spent eight years getting to 4 percent of GDP, it would amount to an additional $1.8 trillion in spending. If the U.S. reached that level sooner, it would cost something to the tune of $2 trillion.

Figures in billions of dollars

"I will use the money we're no longer spending on war to pay down our debt, put more people back to work, rebuilding roads and bridges and schools and runways," the president said.

Polls show there's a lot of support for cutting back on defense spending. Carl Conetta, with the nonpartisan Project on Defense Alternatives, says you don't need a Cold War-style buildup to counter threats such as terrorism and nuclear proliferation.

"The types of threats we face are of a different order," Conetta says. "They are not based fundamentally in advanced economies, using very expensive equipment and expensive troops."

But the Romney campaign says the world remains a dangerous place. Romney sees a stronger military as part of a "peace through strength" approach, reminiscent of Ronald Reagan's defense buildup.

Dov Zakheim, a Romney surrogate and former Pentagon official, told the audience at a recent foreign policy forum in Washington, D.C., that a bigger military will help avoid war with U.S. foes, such as Iran.

"We are convinced that the only way to stop the Iranians is not to invade a country that large, but to be credible about what you are going to do," he said.

The way to be credible, Zakheim says, is by having ships in the water and planes in the air.

So there is a clear difference in how the two sides view the size of the military. For Romney, there's another question: how to pay for more defense.

During the debates, Obama frequently includes defense in his list of Romney budget busters. Just this week, the president listed what he said would be the cost of Romney's tax cuts, and then said, "Gov. Romney then also wants to spend $2 trillion on additional military programs, even though the military's not asking for them."

Expect to hear that figure a lot. Independent analysts agree that spending 4 percent of GDP would cost $2 trillion more than the Obama budget calls for.

But during the vice presidential debate, Rep. Paul Ryan denied the tab would be that high. He said the White House has cut $1 trillion in defense spending — and that Romney just wants to put that money back.

There's disagreement about whether the Romney budget would cost $1 trillion or $2 trillion more. But whatever the cost, the Romney campaign says he would usher in a healthier economy that would help pay for it.

It's tough to say whose math will add up, since both campaigns are projecting out years into the future. But the two sides' plans for spending underscore deep differences about the role of the military in that future.