Accessibility links
To Shrink Rents, S.F. Considers Shrinking Apartments Many single people find it nearly impossible to find an affordable apartment in San Francisco. In an effort to cut rents, city supervisors are weighing a proposal to reduce the minimum allowed size for a studio apartment to 220 square feet — not much bigger than a large parking space.

The development firm Panoramic Interests is building about two dozen "micro-apartments" in San Francisco. The company is poised to offer even smaller units if the city approves a proposed new minimum size of 220 square feet. Artist's Rendering of Smartspace Unit Courtesy of Panoramic Interests hide caption

In many large cities, like Dallas, Phoenix and even parts of Chicago, $800 a month is enough for a clean one-bedroom apartment, decked out with a living room, washer and dryer — and maybe even a pool, in a larger complex.

But if you want to live alone in San Francisco, getting those amenities at that price is practically a pipe dream. With the region's resurgent high-tech industries luring many well-educated, well-paid workers to the Bay Area, the average rent for a studio apartment in the city now runs around $2,000.

The San Francisco Board of Supervisors is considering a proposal that seeks to address that. A proposed change to the building code would reduce the minimum allowed size for a studio to just 220 square feet. That includes the bathroom, kitchen and closet — leaving a living area about the size of a cruise-ship cabin.

While that may sound like a tight squeeze, supporters of these "micro-apartments" say they would provide a much-needed option for the pricey and densely packed Bay Area.

Andy Huang, 31, moved to San Francisco from New York this summer. He has a good job in the tech field, but he's living with three roommates in a two-bedroom apartment.

One roommate, Leo, lives in what was probably once a pantry. The other two roommates occupy the unit's actual bedrooms.

For $800 a month, Huang lives in what was once the living room. His clothes hang on a set of parallel bars in the corner. Contact lens cases, deodorant and other toiletries adorn the fireplace mantel. 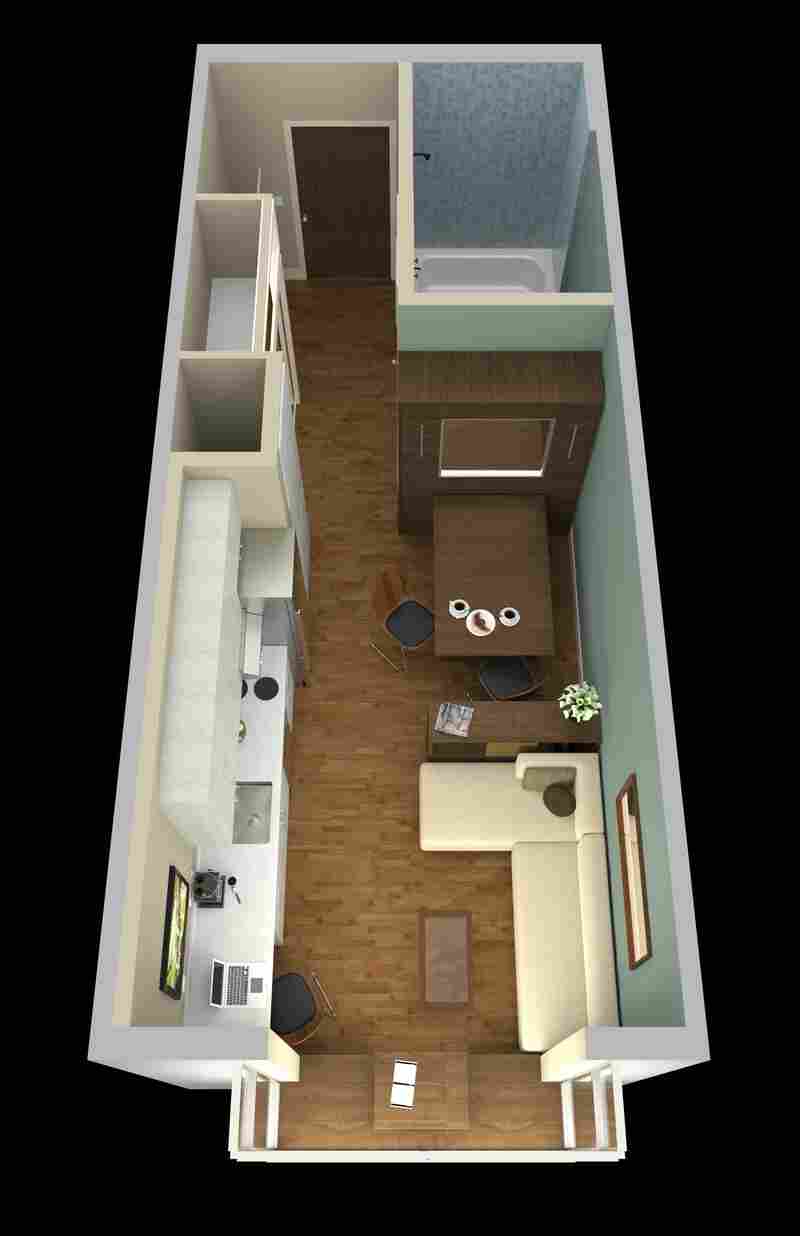 Spaces must serve double duty in micro-units — like the dining table above that converts into a Murphy bed. Artist Rendering of Smartspace Unit Courtesy of Panoramic Interests hide caption 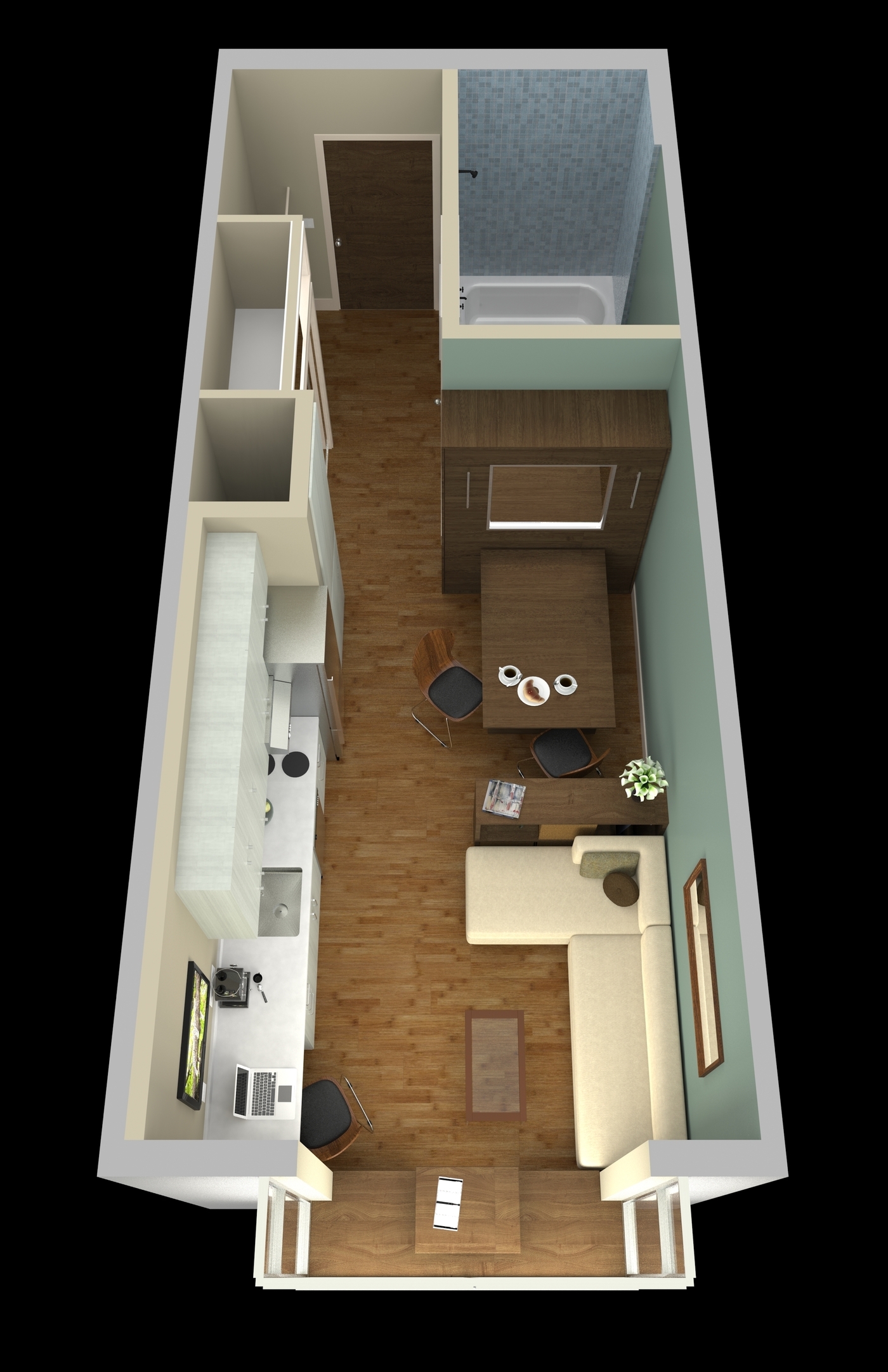 Spaces must serve double duty in micro-units — like the dining table above that converts into a Murphy bed.

"As you can see, there's no closet," Huang says and laughs. And there's no sofa or desk, either.

"Yeah, this is definitely not for everyone," Huang says. "People would be frustrated by the fact that this room has no closet. There's four guys sharing a bathroom."

"We have a housing affordability crisis in San Francisco," Wiener says. "Rents are through the roof."

Wiener says he wants to help people who would prefer their own space but can't afford the city's sky-high rents.

"Shoebox" apartments are commonplace in large international cities like Tokyo and Paris. Berkeley, Calif.-based architect Patrick Kennedy points to other U.S. cities like Boston that are trying micro-units on for size. New York recently launched a pilot program to test "tiny living" designs.

Kennedy is convinced that the smaller spaces will soon catch on in San Francisco, too.

He shows off one of about two dozen apartments his firm, Panoramic Interests, is building near downtown. The unit is 290 square feet — just a tad over the current smallest legal size in San Francisco. But he says he could easily go smaller if the micro-unit ordinance is approved when it goes up for a vote in November.

Kennedy is also a master at packing a lot into small spaces — evident as he gestures around the apartment.

"We have a window seat with a table that goes up over there in the corner," he explains. "We have a dining room table that converts to a Murphy bed over here. We're going to have a love seat there."

Even a dishwasher is packed into the tiny kitchen.

Kennedy compares the apartments to tiny cars. "It's like the Volkswagen or the Fiat Cinque Terre ... or the Smart car," he says. "People are skeptical when it's first introduced, but soon it's embraced."

But while there may be demand for supersmall units in big cities, the plan does have its critics. Some worry that San Francisco could go the way of Singapore if the tiny units catch on. That Asian megacity is now limiting micro-unit construction to reduce overcrowding.