Accessibility links
With A Phone Call, Truckers Can Fight Sex Trafficking The scores of truckers on America's roads see and hear a lot, so they're in a position to notice when something at a rest stop doesn't look right. That's why people who fight sex trafficking of underage kids are enlisting drivers to help. 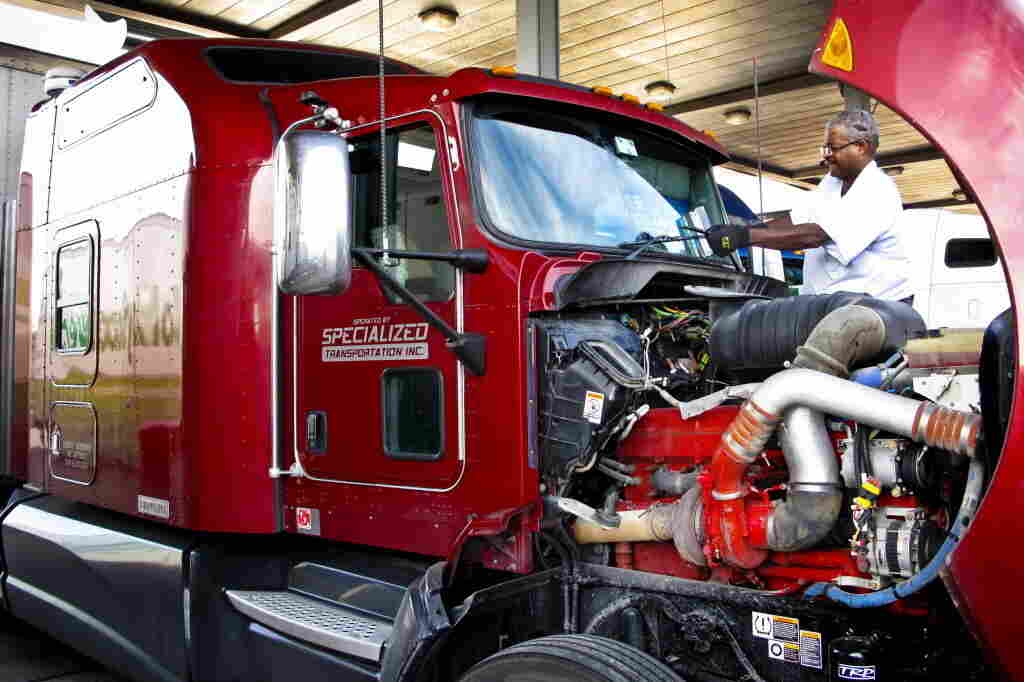 Errol Giwa, en route to Washington, D.C., fuels up and wipes down his windshield at the truck stop in Jessup, Md. He says in his 34 years as a truck driver, he has heard of many instances of human trafficking at truck stops but hasn't seen it with his own eyes. "If you are looking for that sort of thing, it's not hard to find on the road," Giwa says. Brakkton Booker/NPR hide caption 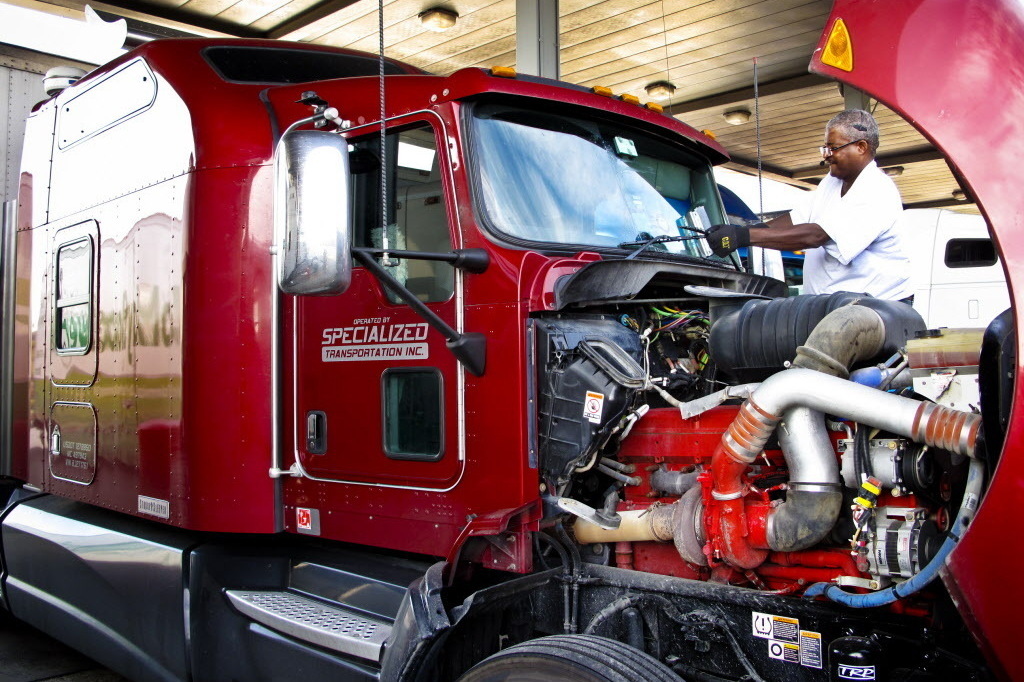 Errol Giwa, en route to Washington, D.C., fuels up and wipes down his windshield at the truck stop in Jessup, Md. He says in his 34 years as a truck driver, he has heard of many instances of human trafficking at truck stops but hasn't seen it with his own eyes. "If you are looking for that sort of thing, it's not hard to find on the road," Giwa says.

Eight years ago, a truck driver parked at a travel center near Detroit made a phone call that changed a life.

"I pulled into a truck stop about midnight," Willis Wolfswinkel remembered. "Getting my log book done. Had two girls knock on my door. And I waved them on 'cause I knew what they were looking for."

Something about those girls bothered Wolfswinkel. They looked young, so he called 911.

Trafficking By The Numbers

The U.S. has outlawed human trafficking since the Civil War. Prostitution is outlawed in every state. But as President Obama pointed out in a speech in September, "For all the progress that we've made, the bitter truth is that trafficking also goes on right here, in the United States." A recent State Department report notes progress in recent years against human trafficking in the U.S. — which refers to a number of crimes including forced labor, debt bondage, involuntary servitude and coerced sex work — but says funding for anti-trafficking efforts declined last year and existing laws remain under-utilized. Here are a few numbers:

1: Number of states without any specific anti-trafficking law (Wyoming)

112: Number of males younger than 18 arrested for prostitution or commercialized vice (2010)

542: Number of females younger than 18 arrested for prostitution or commercialized vice (2010)

27,000: Number of people federal agencies trained to recognize and fight trafficking in 2011

When the girls went inside another truck in the same lot, he called again. Wolfswinkel kept watching as the police arrived.

"Evidently this one phone call started a major investigation, because it turned out there were two girls that were, I don't know, 14 or 15, something like that, that were kidnapped out of Toledo, and they obviously, you know, in the end were rescued," said Wolfswinkel, who's now retired and living in a small town in Minnesota.

If You See Something, Say Something

The scores of truckers carrying freight across America see and hear a lot on the road, so they're in a position to notice when something at a rest stop doesn't look right. That's why people who fight sex trafficking of underage kids are enlisting drivers to help.

Kendis Paris, who runs the nonprofit group Truckers Against Trafficking, holds Wolfswinkel up as an example of someone who is "so representative of how many truckers out there who are really wanting to do the right thing, ready to go and just needing to know who to talk to about this."

Paris said her anti-trafficking group is reaching out to drivers to tell them about red flags — noticing girls who look too young, for example. Then, she says, there's "pimp control."

"It's that SUV that pulls onto the lot, and three or four girls all get out at the same time and they're scantily clothed, and they begin to go from truck to truck to truck," Paris said.

Paris hands out cards everywhere she goes. On them is a phone number for the National Human Trafficking Resource Center, a 24-hour hotline. The hotline is operated by the Polaris Project, a nonprofit group in Washington, D.C.

At the organization's headquarters, a stately red-brick row house, nine young operators who wear headphones are waiting for calls to come in from all over the country.

Sarah Jakiel started the hotline about five years ago. She has watched it go from 200 calls each month to close to 2,000.

Jakiel said some of the best calls come from truckers because they're at the center of things, in an "incredibly unique position to recognize and report sex trafficking of children in this country. They're seeing it at truck stops, travel plazas." 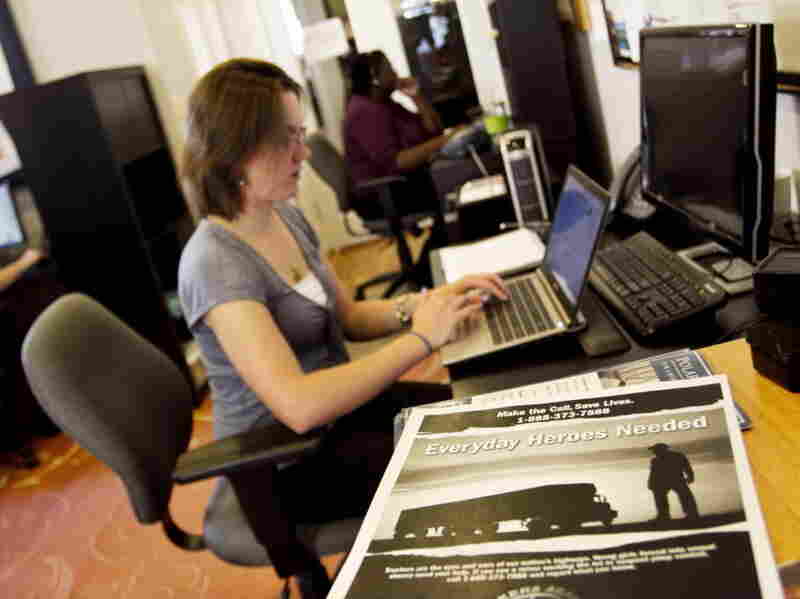 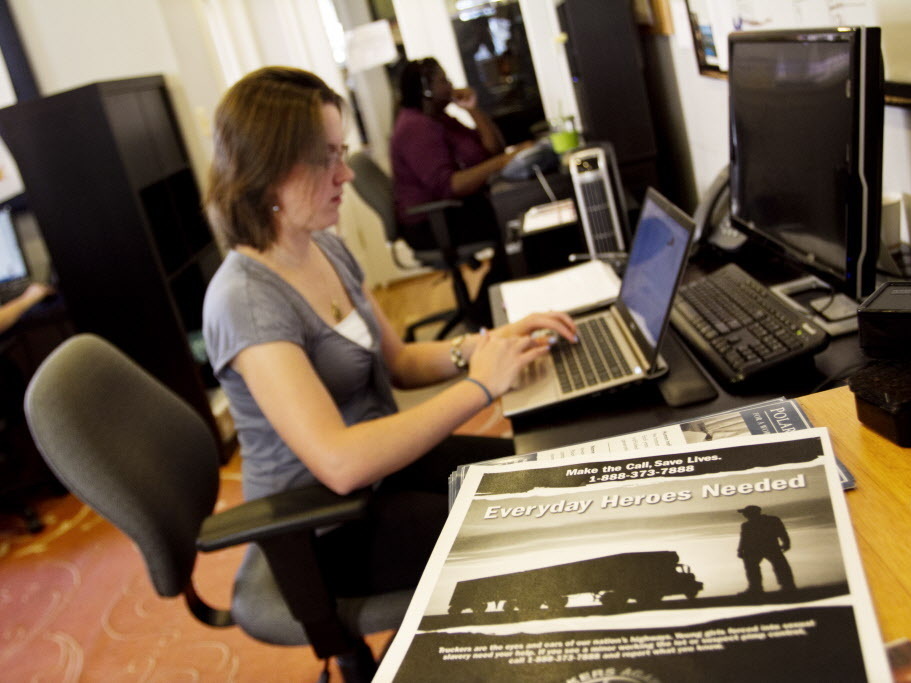 At a travel center near Baltimore in Jessup, Md., truckers chat as they fuel up.

David Hathcox, who has been driving for five years, just dropped off a load of sugar. He said he has seen trafficking in New Mexico, California and Texas.

"They come knock on the door of the trucks, or else they'll be hanging out up front or something like that," he said. "But as a rule I try to stay out of truck stops like that. I have my fiancee with me 'cause when you see that there's a lot of violence and stuff like that."

The travel center is huge. It has a restaurant, a shower and a laundromat, where William Heberling is doing laundry.

A former Army Ranger, Heberling said this place is patrolled, nice and quiet. But he has also seen some bad things on the road. In Kentucky, Heberling saw two girls who looked about 15 years old. He called the police.

"You have to watch out for stuff like that," he said. "And usually if you see somebody that's pretty young, it's something fishy."

A Phone Call That Can Change Lives

Every new employee at this TravelCenters of America stop in Maryland goes through training about human trafficking. Tom Liutkus, the director of nationwide marketing for the company, said it began doing a rollout last year.

That's a message employees hear, mostly by watching part of a 30-minute video produced by the group Truckers Against Trafficking.

A woman in the video, Sherry, says, "Thank God what saved me was that truck driver that called in and said, 'Hey, this is whoever at the TA truck stop, and we have some girls out here that look pretty young.' "

She's the girl who knocked on Willis Wolfswinkel's door that night eight years ago near Detroit. She and her cousin had been snatched by a pimp as they walked to Wendy's to get a Frosty treat. They were missing for months, until the police intervened after Wolfswinkel's phone calls.

"Oh, yeah. That was very touching," Wolfswinkel said. "I got kids, and I can't even imagine what a parent would be or feel like if their kid disappeared like this."

If truck drivers say something when they see something strange, he said, maybe more parents won't have to go through that pain.