Accessibility links
Investors' Funds Are Recovering, But Not Their Nerves Retirement accounts have finally recovered the ground they lost when the stock market started crashing in 2008. But they have lost five years' worth of gains. So millions of small investors are doubting the old adage "invest for the long haul."

Investors' Funds Are Recovering, But Not Their Nerves

The Dow Jones industrial average dropped more than 500 points on Oct. 19, 1987, in the stock market crash known as Black Monday.

Chicken Little was running wild 25 years ago today. But one could hardly blame the poultry for panicking.

Turns out, the 1987 plunge was a mere stutter step. The Dow Jones industrial average, which closed at 1,739 that day, quickly bounced back. Within a decade, the stock-price average had nearly quintupled.

Financial advisers say the lesson was clear: The stock market rises over time; invest for the long haul.

But millions of small investors are no longer listening to that advice. Yes, it's been a quarter century, with the Dow industrials standing at 13,549 at the start of this silver-anniversary date. But there have been terrifying plunges along the way.

Thursday brought another reminder of the frightful volatility of Wall Street. Shares of Google — knocked down by a surprise release of quarterly earnings — tanked so suddenly that individual investors found themselves losing money before they had a chance to sputter: "What the heck?"

So while the stock market has been moving back up to near where it was before the Great Recession, many people just aren't impressed by experts' stay-the-course advice.

"I'm 69 years old now, and I've been through all of it," said David Wilmot, an attorney in Washington, D.C. He's seen the unexplained drops, the super-high-speed transactions, the insider-trading prosecutions — all of it. And it doesn't look good to him anymore. 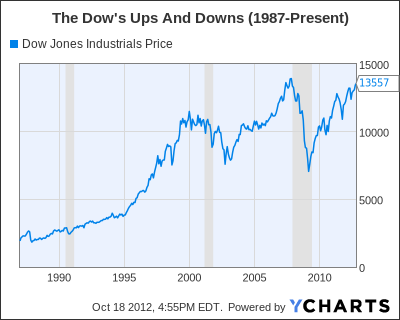 On Thursday morning, he met with a financial planner to go over his investment strategy for his 70s and beyond. For him, that means making mostly supersafe cash investments because he fears risks coming from Europe and China, as well as from Capitol Hill, where lawmakers must fix the so-called fiscal cliff, a collection of looming budget problems.

He wants safety. "As you get older, your perspective changes," he said.

Lots of people have had their perspectives change since the market peaked in October 2007, with the Dow at 14,165. Even though their 401(k) retirement accounts may be looking healthier than they have in years, the results are uninspiring.

So while Wall Street analysts are applauding the stock market's rise this year — up 10.9 percent so far — many small investors are sitting on their hands, and wallets. Only 46 percent of U.S. households have money in stocks or stock mutual funds, compared with 59 percent in 2001, according to the Investment Company Institute, which represents mutual funds.

Not only do fewer people own stock mutual funds, but they are reducing the amounts they hold in them. Over the past three years, outflows from mutual funds have totaled $546 billion, the Investment Company Institute says.

In terms of small investors, the good old days were the late 1990s when stocks soared. Then the tech bubble burst in 2000, the recession hit in 2001 and the financial crisis tanked everything in 2008.

Still, this is America. And many people remain optimistic about investing. Julius Terrell, another attorney, was having lunch with Wilmot, his wary, older friend.

Terrell, 45, has a wife and 12-year-old son. He needs his savings to grow to fund his son's college education and ensure a comfortable retirement for himself and his wife. He plans to continue investing and keeping his eye on those charts that show — over the long haul — it's wise to invest in corporations.

"I'm still taking risks," Terrell said. "Everything happens in cycles. You just have to be prepared" to wait it out until the cycle turns back up, he said.