Accessibility links
Does The Hallmark Channel Have Basic Cable's Most Efficiently Defined Brand? You can look all over the cable landscape, and you'll have a hard time finding anything as predictable as the made-for-television romantic movies on the Hallmark Channel. If you can't script them yourself by now, you're not trying. 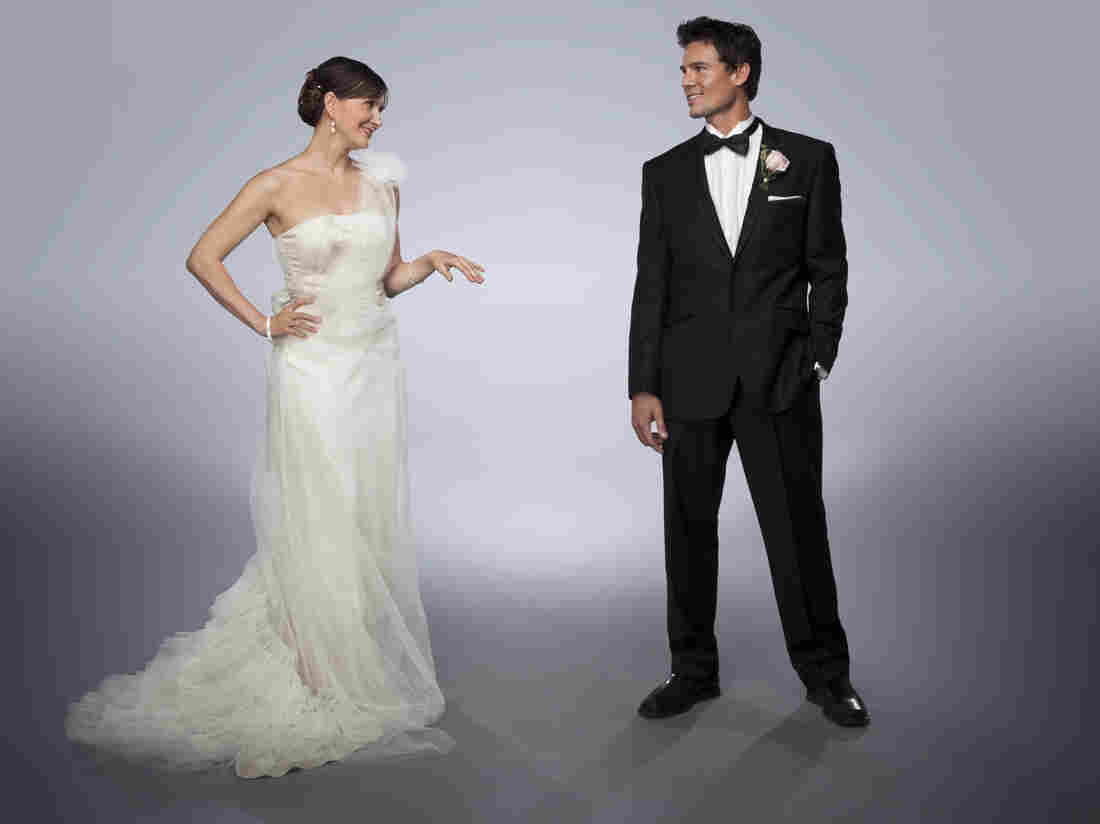 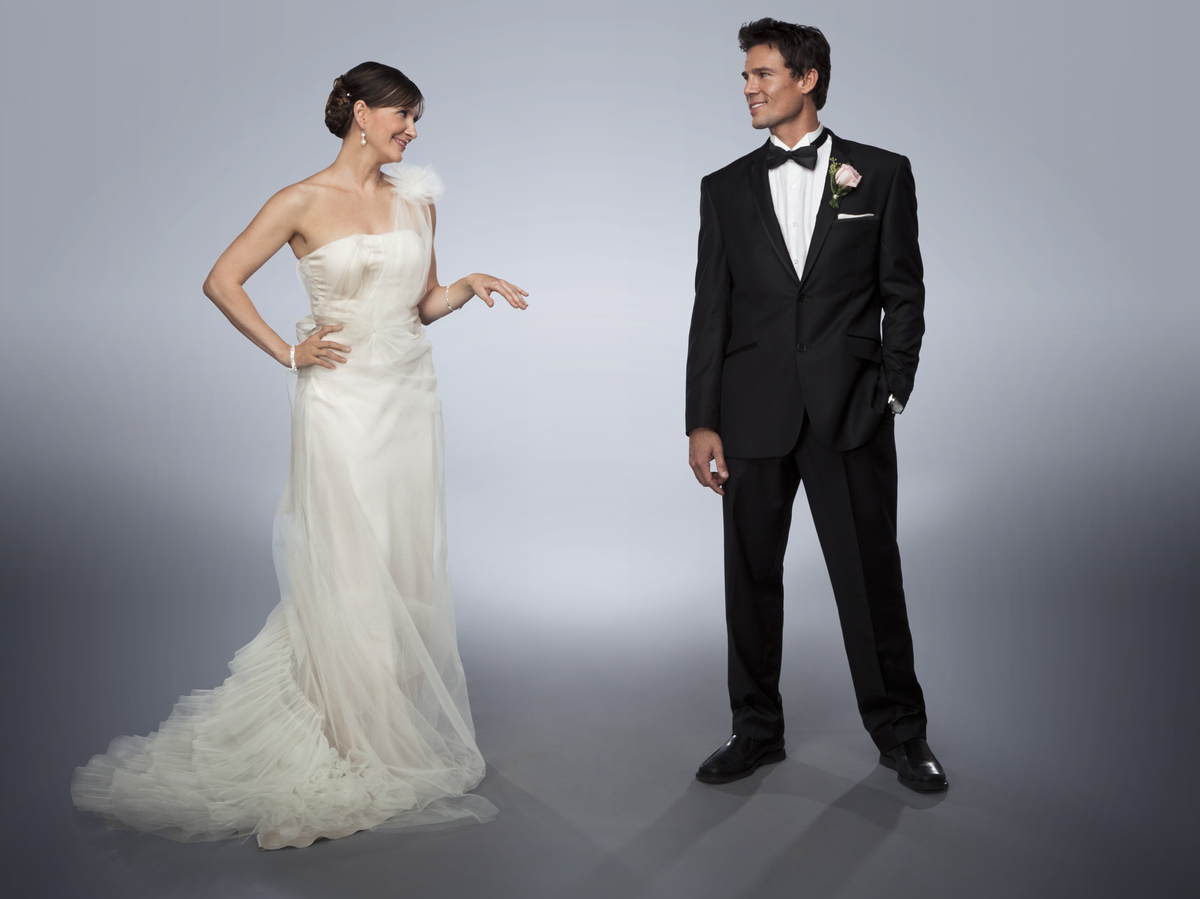 Kellie Martin and Ethan Erickson in I Married Who?

You know Hallmark cards, of course. "When you care enough to send the very best." They made themselves The Company That Makes Greeting Cards, Whether You Like It Or Not, and that brand is made of iron.

They also have a couple of cable channels: The Hallmark Channel and The Hallmark Movie Channel, which have put down the vast majority of their chips down on two things: love and Christmas. Christmas movies will start in the next few weeks, but for now, we're still in regular romance season.

In your typical Hallmark romance, one person is a little too buttoned-up and doesn't believe in love (usually, but not always, the woman) and one person is a little too freewheeling and can't settle down (usually, but not always, the man). They are often set against each other at the beginning – they compete in business, or, in the Environmental Variation, one of them wants to destroy the environment and the other one wants to save it. The Environmental Variation is present, for example, in Honeymoon For One, which this blog (believe it or not) reviewed a little over a year ago.

[Note: There's actually one where the Environmental Variation is subject to the Whimsical Subvariation, which is that instead of the man threatening to destroy the environment, he was threatening to kill all the local leprechauns that it was her sacred duty as the leprechaun inspector to protect. It's called Chasing Leprechauns. I know this because I have watched it. I was not under the influence of anesthesia, although when I think back on it, it seems like I was.] 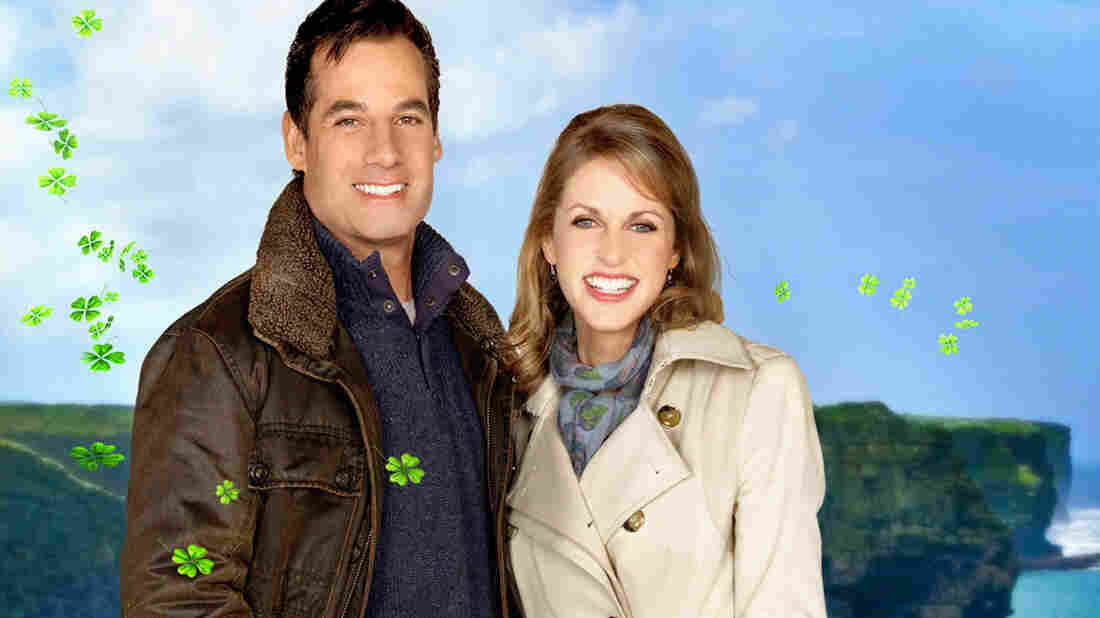 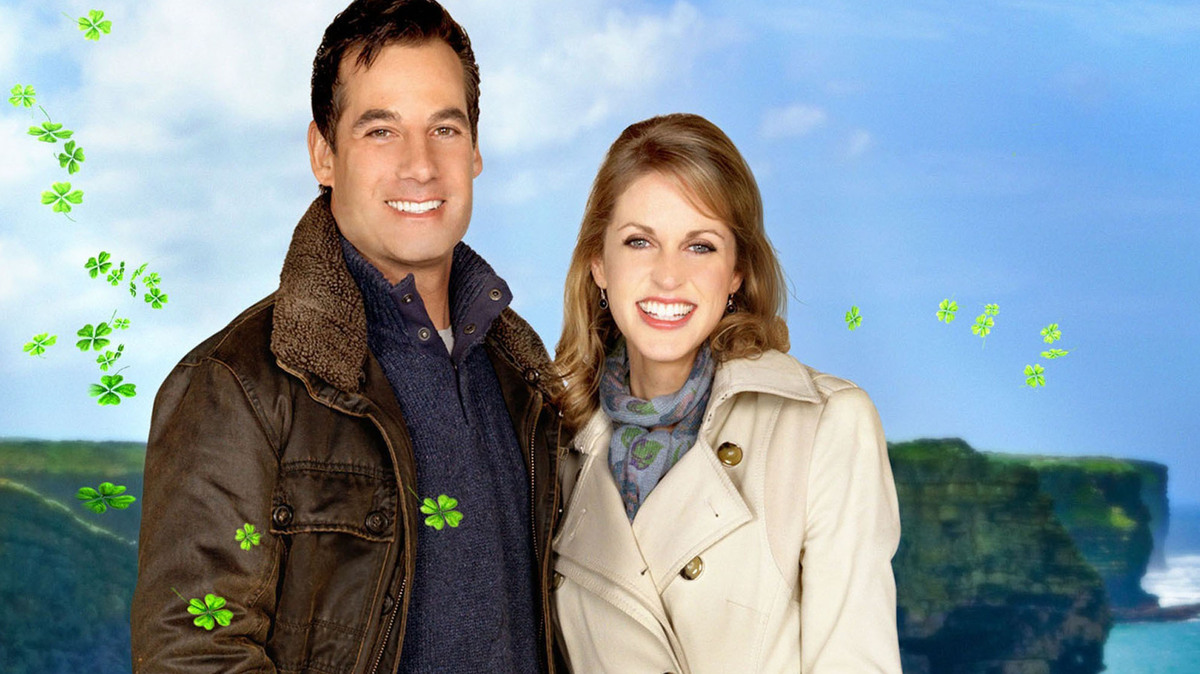 It's very common for one of the leads to have a child – usually a girl. If it's the woman, she may be widowed or divorced from the father, but either way, she's generally so protective of the child that she can barely let herself fall in love. If it's the man, the mother is usually dead, and he's a great dad even though he seems gruff in person. Often in a Woman Meets Dad movie (as opposed to a Man Meets Mom movie), the woman meets the child first, and then she meets the man and realizes that he's a parent, which makes him a better person than she thought.

Hallmark Channel movies place enormous value on a few things. One is living your dream. Perhaps you want to own a restaurant. Perhaps you want to be an artist. Perhaps you want to decorate store windows, open a boutique, or own a cupcake truck. (One or the other person having a job or hobby related to food is disproportionately likely, by the way.) Whatever your dream may be, the movie will end by giving you the opportunity to pursue it, even if it means that you have to merge your French restaurant with your boyfriend's burger place. (That one is called A Taste Of Romance. Teri Polo is in it!) 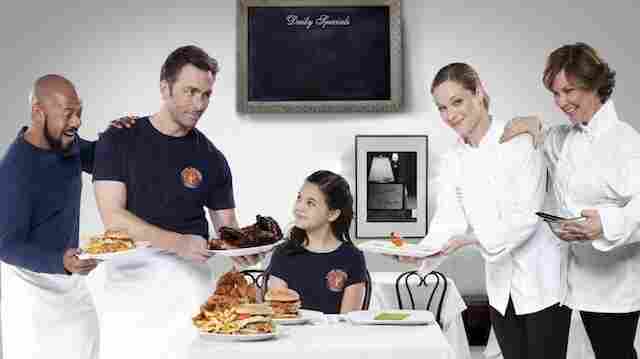 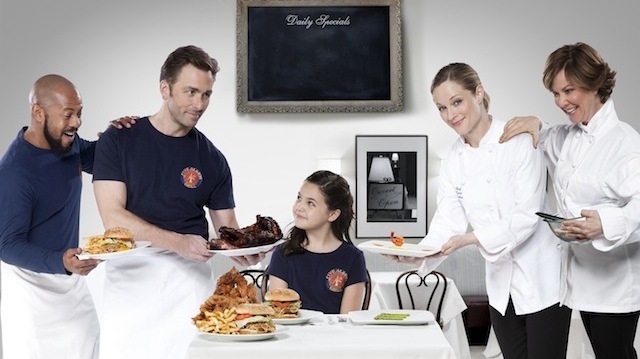 Another important currency of Hallmarkiana is apologizing extravagantly in public. It may be that the Hallmark audience is primarily made up of women who feel particularly aggrieved, but for some reason, these movies are incredibly likely to include one party or the other apologizing profusely for being unfair, probably in front of lots of people. (In A Taste Of Romance, it happens on television when the boyfriend interrupts a restaurant review segment.) (You know how there's always extra time in the local TV news' restaurant review segment!)

These movies are also big on breaking one or the other of the leads away from a relationship that seemed happy but actually wasn't. This is known as the Pullman Maneuver, after the way Meg Ryan breaks up with Bill Pullman at the end of Sleepless In Seattle. The Pullman Maneuver usually doesn't involve a terrible person, just a person who isn't quite right as much as the other lead of the movie is. Often, the poor sucker who gets the Pullman pulled on him or her spends most of the movie gently prying his or her partner to be more conventional. He or she will say things like, "You're not being practical, honey!" or "We don't have time for you to chase your crazy dreams; we have bills to pay." If you are in a Hallmark movie and you find yourself saying these words, the Pullman Maneuver is coming. 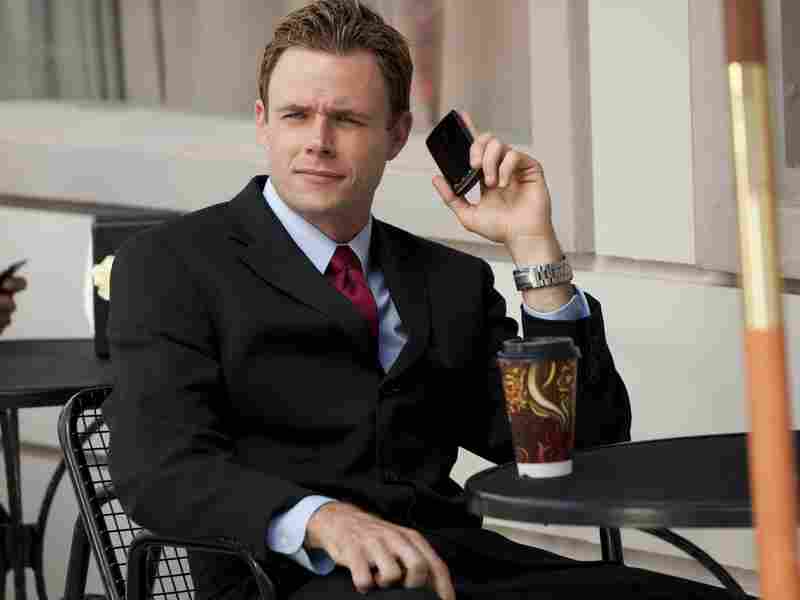 Bradley Snedeker is the actual name of this actor in I Married Who? He plays Kellie Martin's fiance. He is getting The Pullman, and you can tell from this photo. (See how he's on his phone all the time?) Alexx Henry/Hallmark Channel hide caption 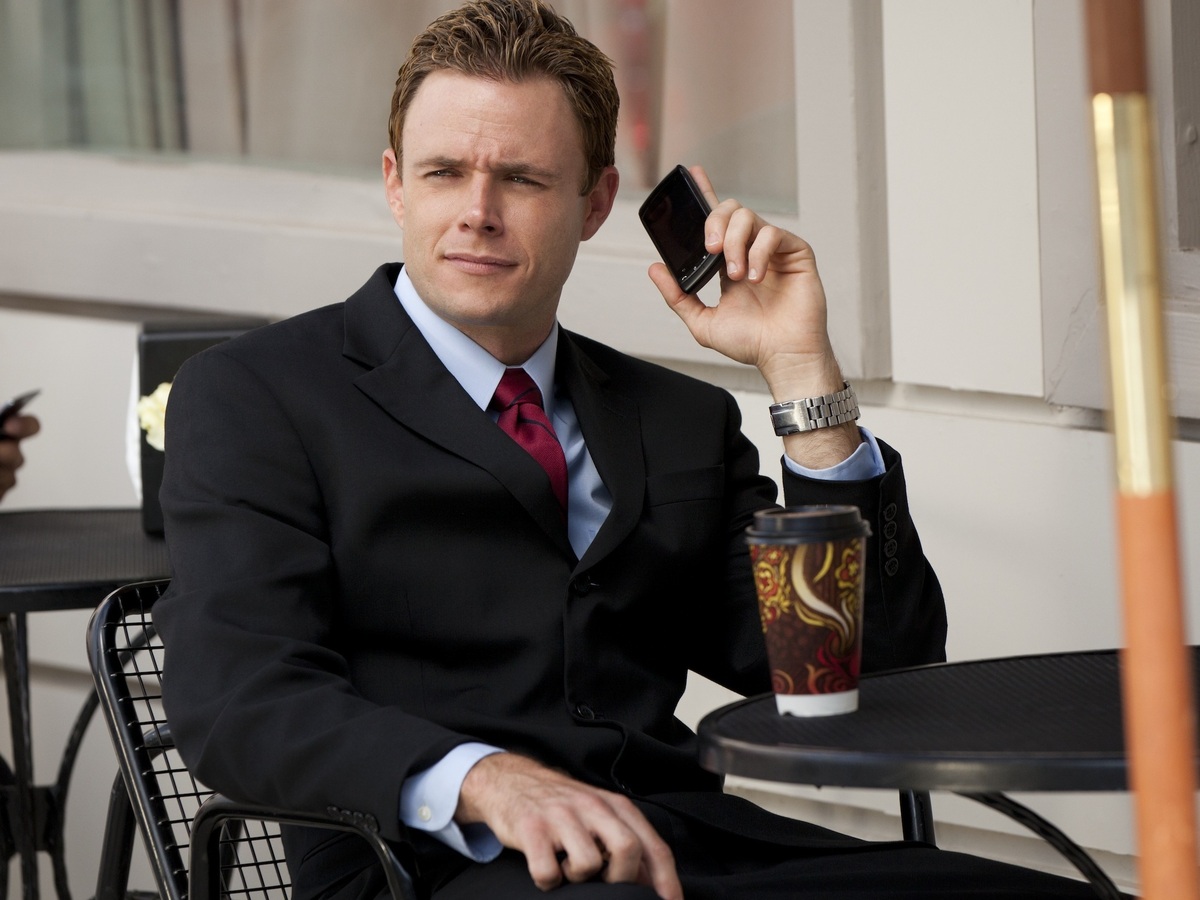 Bradley Snedeker is the actual name of this actor in I Married Who? He plays Kellie Martin's fiance. He is getting The Pullman, and you can tell from this photo. (See how he's on his phone all the time?)

This weekend, Kellie Martin (one of the biggest names in made-for-TV movies) stars in I Married Who? (...yup), a new Hallmark offering in which she plays a woman who gets drunk and marries an actor in Vegas, even though she has a perfectly dull fiancé waiting back at home. This particular movie distinguishes itself with a very naïve, old-fashioned view of drinking, in which you can go from dead sober to blacked out drunk without noticing that you didn't get the virgin cocktail you ordered, and in which the fact that you're drunk is so difficult to discern that someone could marry you while you're in this condition without being kind of a terrible person. [SPOILER ALERT: There's kissing at the end.]

You can't really judge this kind of product as good or bad; what impresses about it is its consistency. Hallmark manufactures these like McDonald's stamps out McNuggets: they're decent, they're satisfying in a superficial way, they're bad for you in excess, and they're reliably the same every single time. It may not be fancy, but boy, they've got it down to a science.