Accessibility links
'Dumplings' And Bunnies: Asian Folk Songs For Kids Rabbit Days and Dumplings is a collection of traditional songs from Elena Moon Park and friends. The album happened after she was challenged by her bandmate and fellow children's music singer, Dan Zanes, to explore her musical heritage. 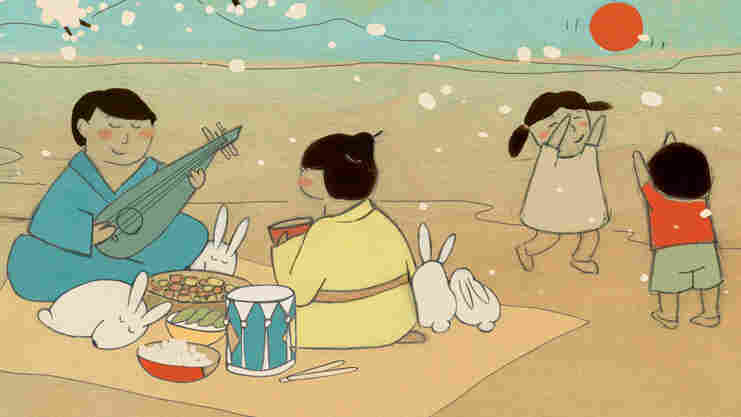 Illustrated by Kristiana Parn, the booklet for Rabbit Days and Dumplings contains notes about each song and its East Asian origins, written by Elena Moon Park. Kristiana Parn hide caption 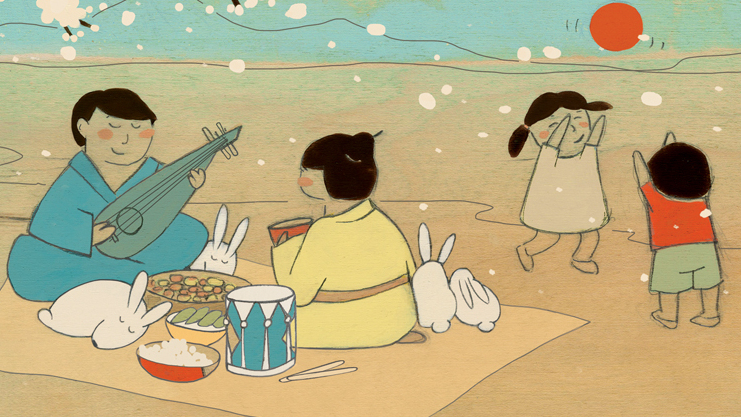 Illustrated by Kristiana Parn, the booklet for Rabbit Days and Dumplings contains notes about each song and its East Asian origins, written by Elena Moon Park.

Billed as "all-ages folk and children's music from East Asia," Rabbit Days and Dumplings collects mostly traditional songs from China, Tibet, Taiwan, Japan and Korea. The album is the creation of Elena Moon Park. She's spent six years playing family music with Dan Zanes, who has a fanatically devoted following among the smaller set. For this project, she brought in dozens of other musicians from around New York City.

Park is a Korean-American, born and raised in East Tennessee with immigrant parents from South Korea.

"It was kind of a mutual idea that Dan and I had — just looking around and seeing a lack of music from this part of the world in the family music scene," Park tells NPR's Melissa Block. "It became a personal project because, when asked by Dan if I knew any great Korean songs we could play at our shows, I actually didn't really know any. It was a way for me to start exploring this music and to start wanting to share it with the broader audience."

Park says there weren't many Asian families in the town where she grew up and that her parents had to make difficult choices about whether she'd learn the language. So these songs weren't a large part of her childhood, but there were a couple that she did know, like "San Toki."

"It's a very simple concept. It's about a bunny who's hopping along the mountainside," Park says, laughing, "and nobody knows where he's going."

"The lyrics of the song are basically describing a train as it enters a tunnel, and water drops on top of the train, makes that sound — 'diu diu' — which sounds like a coin that's flipping onto a surface," Park says.

Park says her parents were surprised when she came to dig up these songs.

"But then it turned out to be something that really drew me closer to my family and to my culture in a way that I wasn't expecting," she says. "We kind of excavated them together. They looked back and they asked around and did some research and helped me find songs. We were able to interact in a way that we hadn't before in this common purpose of looking deeper into these musical traditions. I think they really enjoyed it in the end. It became something very special to them."

Rabbit Days and Dumplings was funded, in part, by Kickstarter donations from people who were excited about a project that explored music traditions.

"A lot of my Kickstarter supporters do come to it from a very personal place," Park says. "There are a lot of Asian-American families involved, and there are a lot of families with adopted Asian children that have reached out to me.

"I had a really nice letter from a parent in, I think, Kansas, who has an Asian-American daughter — who I think, like me, is in a town with not very many Asians. I think she's maybe 7 or 8 years old and going through a mini-identity crisis about being Asian and being one of the only Asian kids in her class. She was really excited to see this, and that this was kind of something that helped her, which is a beautiful thing to hear."