Accessibility links
'Friendkeeping': The Close Relationships We Could, But Can't Easily, Let Go Julie Klam's new book Friendkeeping is a serious — and funny — look at adult friendships. It's a surprisingly rare thing, and she and I spoke about why friendships are such a neglected science and how we keep them up as we get older.

'Friendkeeping': The Close Relationships We Could, But Can't Easily, Let Go

'Friendkeeping': The Close Relationships We Could, But Can't Easily, Let Go 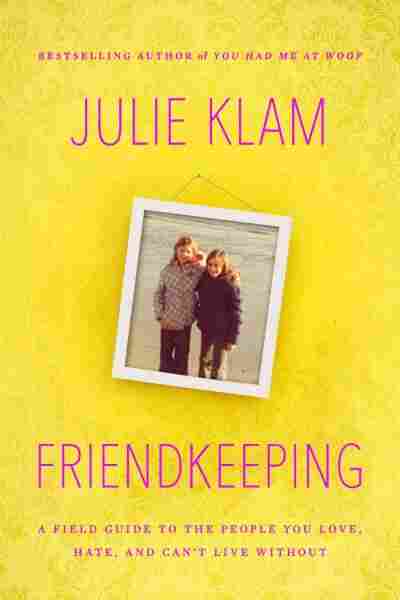 A Field Guide to the People You Love, Hate, and Can't Live Without

Title
Friendkeeping
Subtitle
A Field Guide to the People You Love, Hate, and Can't Live Without
Author
Julie Klam

At Monkey See this week, we've been talking about friendship and pop culture. We close with this discussion with Julie Klam, whose new book, Friendkeeping, goes on sale next week.

I read Julie Klam's Friendkeeping, of all the books I had on my desk at the time, because it was about adult friendships, a topic that's surprisingly neglected with all the self-help and relationship stuff that's out there in the ether. Klam, who's written other memoirs about family and dogs, writes about her closest, longest friendships as well as the ones she stumbles on — she writes early in the book that friendships "have become more profound to me, are based on more depth, though recently I did make a friend because we were both looking for vichyssoise at Zabar's."

I realized as I read it that I wasn't responding only to the book itself — which covers territory like secrets, crisis management, and how much advice to give your friends — but to the mere fact that it was written. It was taking seriously something, namely adult friendships, that often turns into the wallpaper of cultural life: something that's there, and that's lovely, and that ideally you don't have to think about, but not something that you would delve into deeply. Not something you attend to specifically.

Friendships, to many of us, are part of the fundamental infrastructure of our emotional lives, and when Klam and I spoke about the book, she made exactly this comparison when she explained why she wanted to write about friendship in the first place. Her inspiration wasn't gang lunches or slumber parties — it was urban decay.

She came up with the idea for Friendkeeping, she says, while sitting on the George Washington Bridge contemplating the fact that she keeps hearing that the New York City bridges are all going to collapse because they're not being cared for.

"That's kind of the same thing with a lot of friendships," she says, "where you don't really put that effort in until either you're celebrating something or something awful happens." Friendships, like bridges, need upkeep, and as with bridges, sometimes it doesn't happen and then you're looking at something that can't hold you up when you need it to. She realized, too, that it wasn't an area that was being written about very much in a way that spoke to her experiences. She found a lot of clichés, but not a lot of insight. "Everything that I had read about friendships was always ... platitudes about, you know, 'friends are like flowers and you have to water them' or whatever. Or the T-shirts with the koala bear and the flower and the 'Friends are...'."

So I put the question to her: Why is there so much writing about so many aspects of our lives — love, sex, money, family, careers — and so little about the inner workings of friendships that are so central to so many people's lives? Maybe, Klam theorizes, it's because friendships seem disposable and interchangeable when you look at them like an efficiency expert. "There's some sort of thing about, like, 'Well, if you don't like the friend, just don't be friends with them.' Rather than the idea of working things out." Working things out, as you know if you read other kinds of relationship books, is the usual ideal outcome, rather than bolting when trouble strikes.

In a way, this theory reminds me of what we talked about here earlier this week: that the very compelling fragility of friendships comes from the fact that there's such a low barrier to exit. You don't have to work on anything if you don't want to. Indeed, Klam says when she wrote the book proposal, she realized that in theory, there were easy answers to all the hard questions she had about friends. "You could possibly write every question that I posed and answer it: 'Well, just don't be friends with them anymore.' 'If you don't like their spouse, don't hang out with them.' So there was less of a sort of [concern for] how to work through things ... just because you know you really can walk away."

And of course, that's what makes keeping up with your friends complicated. When I ask her what she considers the big challenge of adult friendships, she emphasizes that it's legitimately hard to make time for them, because they're not, you know, mandatory. And the older you get, the more things in your life are mandatory.

"Your priorities change so much," she says. "And our time gets so filled with work or family or whatever that [friendship] always seems to be the thing that takes the back seat. It's something you don't have to do. You have to work on the weekend, you have to take your kid to soccer, you have to ... whatever, do some family commitment. And friendship is always sort of choices of things." After a while, things add up and they're not on the side of your social circle: "It's very easy to say, 'I am too tired. I don't want to, you know, make this effort at this point.' And cancel."

It seems inevitable that even a reasonably small number of monkeys writing about pop culture and friendship wouldn't take long to ask about Sex And The City, so I broach the subject with Julie Klam. And she hesitates a little. "I've lived in New York since '86," she says. "I don't know anybody who talks that way. I've never — if I ever — I've never talked that openly about sex with anybody. I don't think even my doctor." She's also not sure the show was quite as much of a grab-bag of representative personalities as it wanted to be, if we're talking about covering a lot of ground. "It's like they're four friends that are supposedly all different, but they're really so much alike."

I tell her it always frustrated me when this one show, this one alignment of women, devoured other ideas of female friendship so much that wherever women were portrayed in a group, it was described as some kind of SATC variation — Sex And The City on a farm, in a dorm, with teenagers. It's not the first time, she points out. At a previous moment in television's development, "any time there were three women together, you were Charlie's Angels." 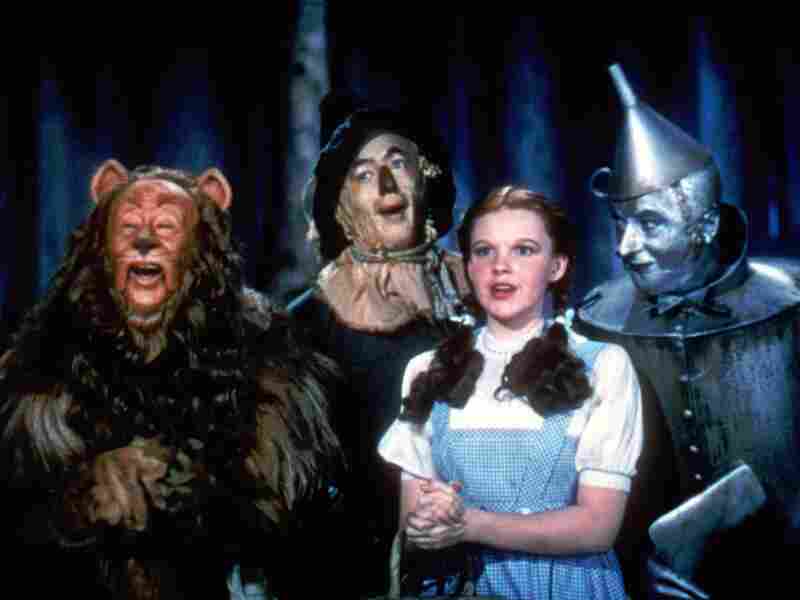 Bert Lahr as the Cowardly Lion, Ray Bolger as the Scarecrow, Judy Garland as Dorothy, and Jack Haley as the Tin Man in The Wizard Of Oz. AP hide caption 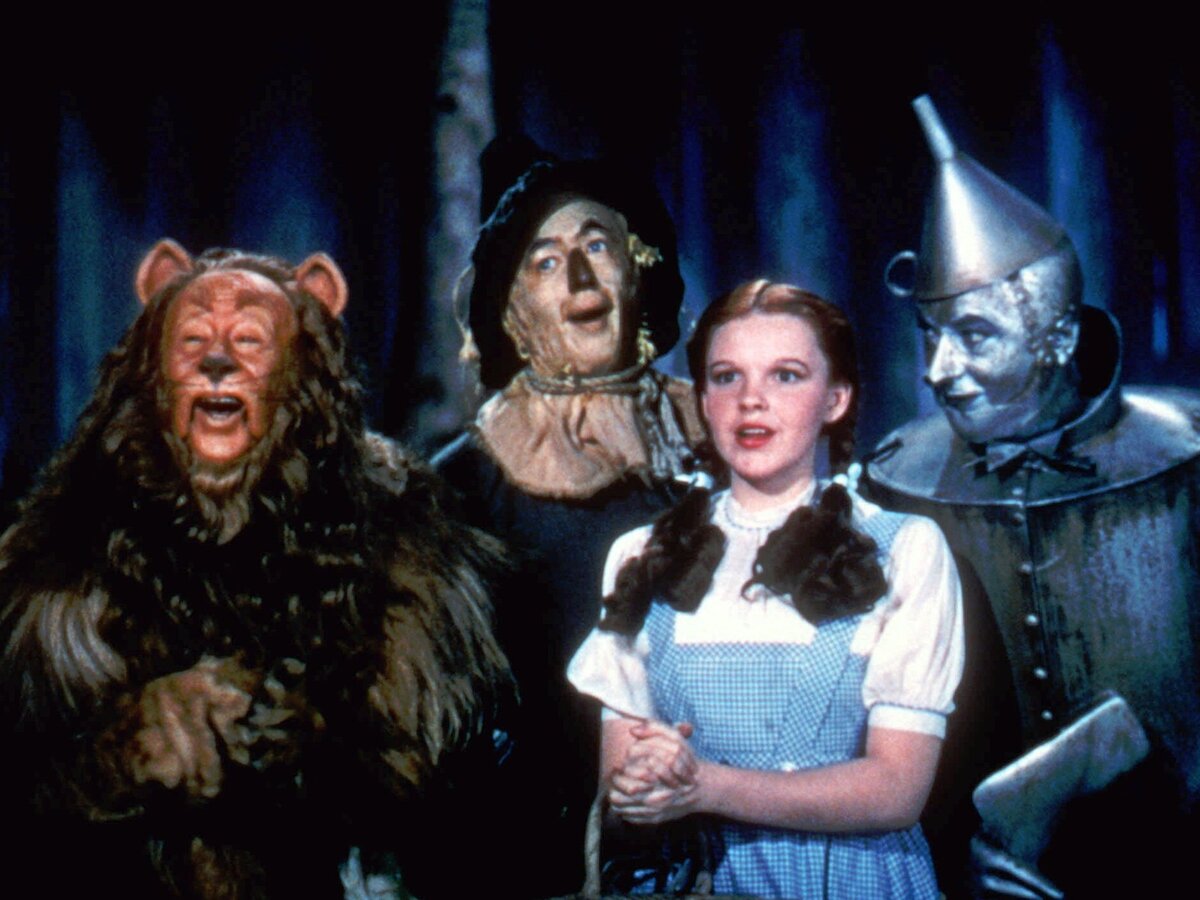 Bert Lahr as the Cowardly Lion, Ray Bolger as the Scarecrow, Judy Garland as Dorothy, and Jack Haley as the Tin Man in The Wizard Of Oz.

So that is not her dominant pop culture depiction of friendship. But she does have one. And it does involve a foursome. And it does involve jewels, sort of — rubies and emeralds, anyway. "The friendship that is my favorite is Dorothy and the Scarecrow," she tells me. "I mean, I think Dorothy and all of the characters — well, Dorothy, the Tin Man, the Scarecrow, the Lion ... they all come together for like a natural reason. They come together — it's not like they met at a party." Indeed, over the course of the story, they display a lot of the qualities you might find emerging in your own close friends. "They all support each other amazingly and overcome their own fears and difficulties," she says. "I go back to [The Wizard Of Oz] a lot, because I think that there's a lot of selflessness there."

Indeed. But had Dorothy stayed in Oz, she would have had to find a way to call the Scarecrow from time to time for lunch. Otherwise, it's so easy to lose track of each other.