Accessibility links
Amid Calls For Reform, China Waits For New Leaders As China prepares for a once-in-a-decade leadership transition, pressures are mounting for the party to change. Discontent over stalled political reforms, a U-turn in economic policy, and a political scandal involving murder and corruption suggest change is expected — but it could be only limited in scope. 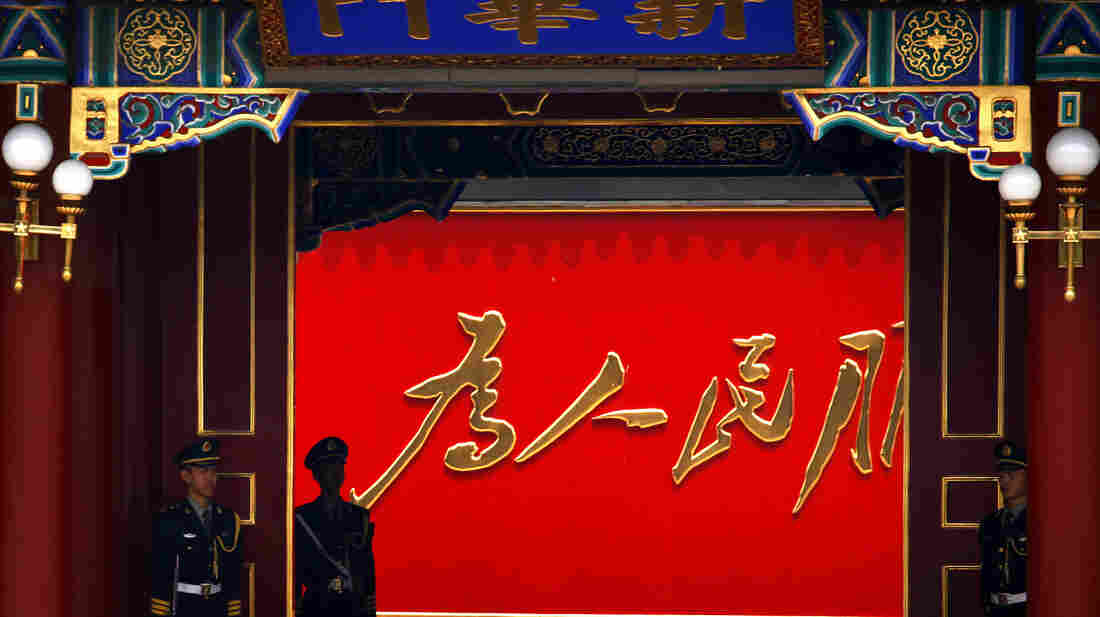 Guards stand outside the Xinhua Gate of the Zhongnanhai leadership compound in central Beijing earlier this year. China is preparing for a once-a-decade leadership change amid signs of growing public dissatisfaction. David Gray/Reuters/Landov hide caption

The slogan "Long Live the Great Communist Party of China" is emblazoned on the wall outside the Beijing compound where the country's leaders live and work.

But now that party is under pressure to change as it prepares for a once-in-a-decade transition of power, which starts at a party congress scheduled to begin Nov. 8.

Change could be in the air in China, as the country's leaders wrestle with the fallout of a damaging scandal encompassing murder, corruption, abuse of power and sex.

Even a staid party publication is warning it faces a dead end if it doesn't move to change its political and social system.

High oxblood walls ring the leadership compound, punctuated by cameras above and policemen beneath. Very few people are party to the intense power struggles that may be playing out inside these walls.

But outside the walls of power, there's growing criticism of the legacy this generation of leaders has left after a decade in power.

"I don't think these 10 years will be seen as having achieved all that much for China," says Susan Shirk, a former State Department official during the Clinton administration and China expert at the University of California, San Diego. "There's tremendous criticism inside China of the way this administration has made a U-turn and set China back."

Discontent From Many Quarters

The regime is like a company. The youth league are like professional managers. The princelings are like descendants of the shareholders. For the past decade, the managers have been in charge. But the descendants think they've managed the company badly, so they want to take over.

Political reform has stalled since 1989, while economic policy has concentrated on building up the state sector at the expense of the private sector. On a recent visit to Beijing, Shirk says there was a clear mood of dissatisfaction.

"It looks like the leaders were feathering their own nest, creating patronage for themselves, rather than pursuing an economic policy that really distributed the benefits of development broadly to the people," says Shirk. "This is not just my criticism. There's a consensus among Chinese economists that policy has made a U-turn."

Even the state-run media is on the offensive. Two months ago, an editor at the Study Times newspaper wrote an article declaring that the problems caused by the past decade's policies "are even more numerous than the achievements."

This was followed by a call for reform in the party publication Seeking Truth, which pronounced that "stagnation and turning back is a dead end."

"That a conservative magazine is singing about reform shows a change in attitude at the top," says Zhang. "I don't think they've reached consensus on how reform will be carried out. They just realize they can't continue as before."

Zhang himself sees the party's future in absolute terms, predicting either "reform within five years or death within 10 years."

Politically, the party is reeling from the downfall of disgraced politician Bo Xilai, who is being investigated for abuse of power, corruption, improper relationships with women and involvement in a murder.

His wife, Gu Kailai, was given a suspended death sentence after being found guilty of murdering British businessman Neil Heywood. Until seven months ago, Bo was a hot contender for a top post.

Now his downfall has upset the delicate balance between factions inside the Communist Party. Many analysts see Chinese elite politics as having two informal coalitions: the "populists" who rose through the Communist Youth League and include the top two leaders right now; and the "princelings," who are the descendants of old revolutionaries. That category includes Bo Xilai and Xi Jinping, the man who will be China's next president.

"The regime is like a company. The youth league are like professional managers. The princelings are like descendants of the shareholders," Zhang says. "For the past decade, the managers have been in charge. But the descendants think they've managed the company badly, so they want to take over."

Xi Jinping is the son of revolutionary hero Xi Zhongxun. His father's political legacy gives hope to reformists like Bao Tong, a former senior official who spent seven years in prison after 1989, when he was secretary to Zhao Ziyang, the party leader who sympathized with student demonstrators.

"If he's like his father, there'll be hope," Bao tells NPR. "His father was very upright. He was a good person. He didn't talk about reform, but he did seek fairness."

The new president isn't all-powerful, however. He'll be first among equals in a collective leadership. Currently that committee consists of nine people, but rumors are circulating that it will be reduced to seven posts.

Only two of the current members of the committee will remain: Xi and his premier, Li Keqiang. As for the rest of the positions, horse-trading could continue until the very last minute.

But the black box of Chinese politics means all this happens behind closed doors. Zhang, the historian, warns of the dangers of oversimplification.

"Westerners think black is black and white is white," he says. "How could they know that for Chinese, black contains white, white contains red, red contains black, everything is mixed. It's rather complicated."

In less than three weeks, a new chapter in China's political history will begin at the Great Hall of the People in Beijing. However, no one knows how many men or women will rule China, or who they are. Change may be coming, but the question remains just how much.