Accessibility links
Foreign Policy At Presidential Debate: Rhetoric Vs. Reality As the presidential candidates prepare for Monday night's foreign policy debate, they'll probably think about Iran, Israeli-Palestinian talks and China. Each case would require a balance of alliance-building and tough talk. But how much of what the candidates say will they actually pursue if elected?

Libya Has Become The Flash Point Of Foreign Policy Debate

President Obama and GOP presidential nominee Gov. Mitt Romney are getting ready to answer any and all possible questions about foreign policy for Monday night's debate, the last one before the Nov. 6 election.

Iran, Israeli-Palestinian talks and China are among likely topics for the debate — and also major issues awaiting the next president. Each case is a matter of building and maintaining alliances while applying pressure to protect U.S. interests.

In some areas, the heated rhetoric from the candidates on the stump and in the debate may look very different from the actual policies they'll pursue if elected.

Guy Raz, host of weekends on All Things Considered, speaks with three experts about conflicts and countries that are likely to come up in Monday's presidential debate in Boca Raton Fla.

Stephen Walt is a professor of international affairs at Harvard's Kennedy School of Government and co-author of The Israel Lobby and U.S. Foreign Policy.

Jane Harman, a former Democratic congresswoman from California, is president and CEO of the Wilson Center, a nonpartisan policy center.

Richard Perle is a defense policy adviser to many political leaders, most recently to the George W. Bush administration. He's a resident fellow at the American Enterprise Institute for Public Policy, a center-right think tank. 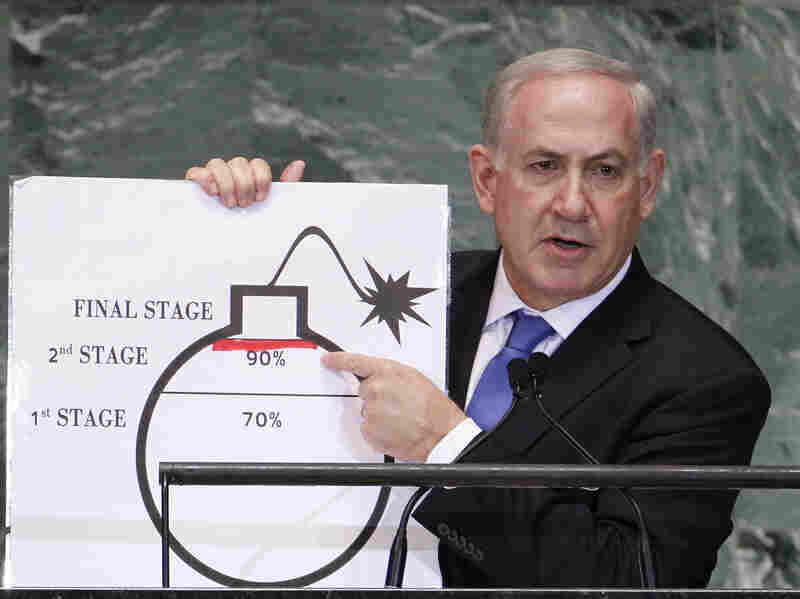 At the U.N. Sept. 27, Israeli Prime Minister Benjamin Netanyahu used a graphic to show how far he says Iran will be by mid-2013 in a quest to develop nuclear weapons. Lucas Jackson /Reuters /Landov hide caption 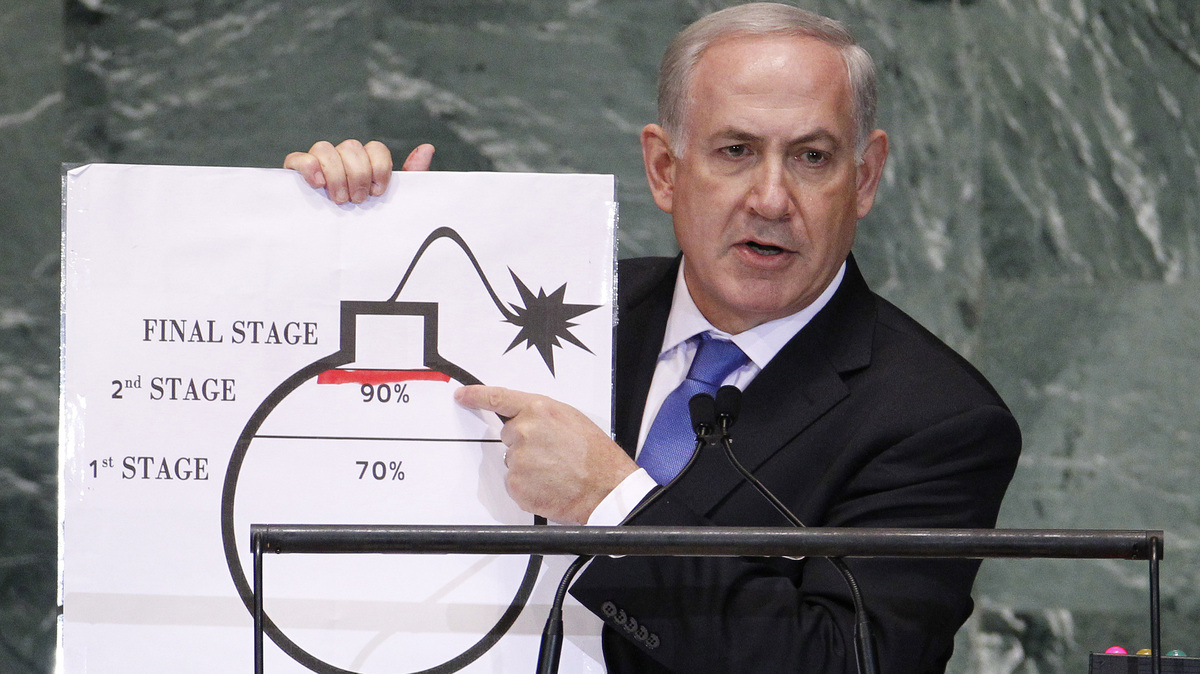 At the U.N. Sept. 27, Israeli Prime Minister Benjamin Netanyahu used a graphic to show how far he says Iran will be by mid-2013 in a quest to develop nuclear weapons.

Iran: Pump Up The Pressure?

On Iran, our panelists disagree about what the next step should be for the U.S. All agree that a military strike should be the last option, but Perle argues that the effectiveness of the current sanctions is running low. Harman says she hopes that after Monday's debate, the rhetoric on the issue will cool down, allowing the countries to negotiate in private.

Walt says preventing Iran from developing a nuclear weapon will be a priority for both candidates, regardless of who gets elected. He says he doesn't think Romney and Obama would handle the issue very differently.

"In particular, I don't think we're likely to see use of force any time in the next year or so," he says. "I think both presidents are likely to pursue a diplomatic course."

"Romney strikes me as the sort of man, with his business background, who can recognize when a policy has failed and begin to develop alternative policies."

Perle argues the U.S. is reaching a limit to what the sanctions can achieve with Russia and China, both pushing back. Both countries are permanent, veto-wielding members of the U.N. Security Council and oppose strong action against Iran.

"It's time to attempt some draconian sanctions without the approval of the United Nations. I believe we can do that, I think we could make life very much more difficult for the Iranians," Perle says. "And while I don't believe that will persuade this regime to change its desire to acquire nuclear weapons, it could destabilize the regime, and that seems to me the best way forward."

Perle says he still considers military action a last resort, but says he believes the Israelis may eventually get to a point where they can no longer wait and "will have a sufficient motivation to take some military action."

The government of Israeli Prime Minister Benjamin Netanyahu has described Iran's nuclear program as an existential threat to his country.

Harman, the former Democratic congresswoman, says one could argue Iran is "already nuclear-capable, meaning it has the technologies, which if it decides ramp them up, will become a bomb, and it also has very advanced missile capability."

While the Iranians have the technology, U.S. intelligence agencies do not believe there is an active nuclear weapons program in Iran, Walt says.

"I do not believe they will try to cross that line because that might be the one circumstance where the United States or Israel would take military action," he says.

Walt says the U.S. should take military action off the table until Iran does have an active weapons program, and he suspects whoever takes office will first try a renewed diplomatic approach with the Islamic republic.

Harman says she hopes whatever moves the next president makes will happen in private, without as much discussion of the options in public and in the media. She also says keeping together an international coalition united against Iran developing nuclear weapons is key — even Russia and China have an interest in keeping Iran in check, she says.

"I would hope that the noise of Monday transitions to a much quieter, steadier approach after the election," she says. 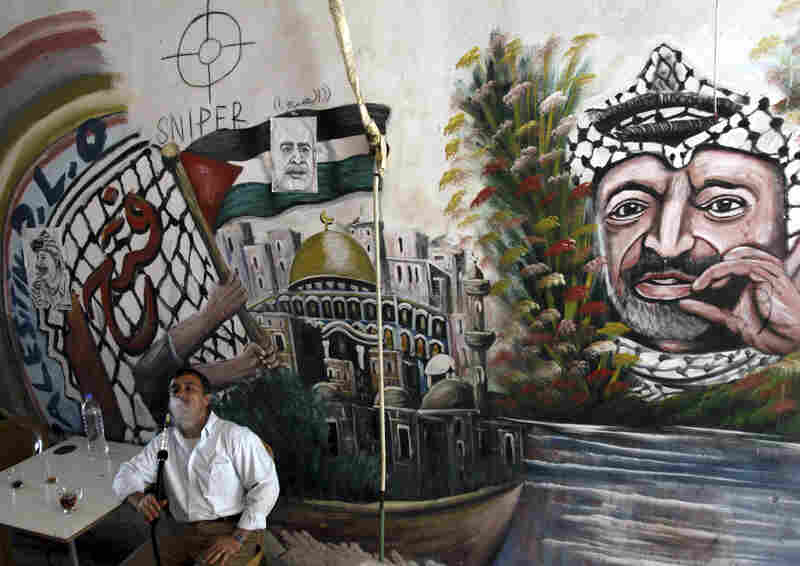 A Palestinian man smokes a nargileh (waterpipe) next to a mural of the late Palestinian leader Yasser Arafat in a coffee shop in the West Bank city of Jenin in September. Mohammed Ballas/AP hide caption 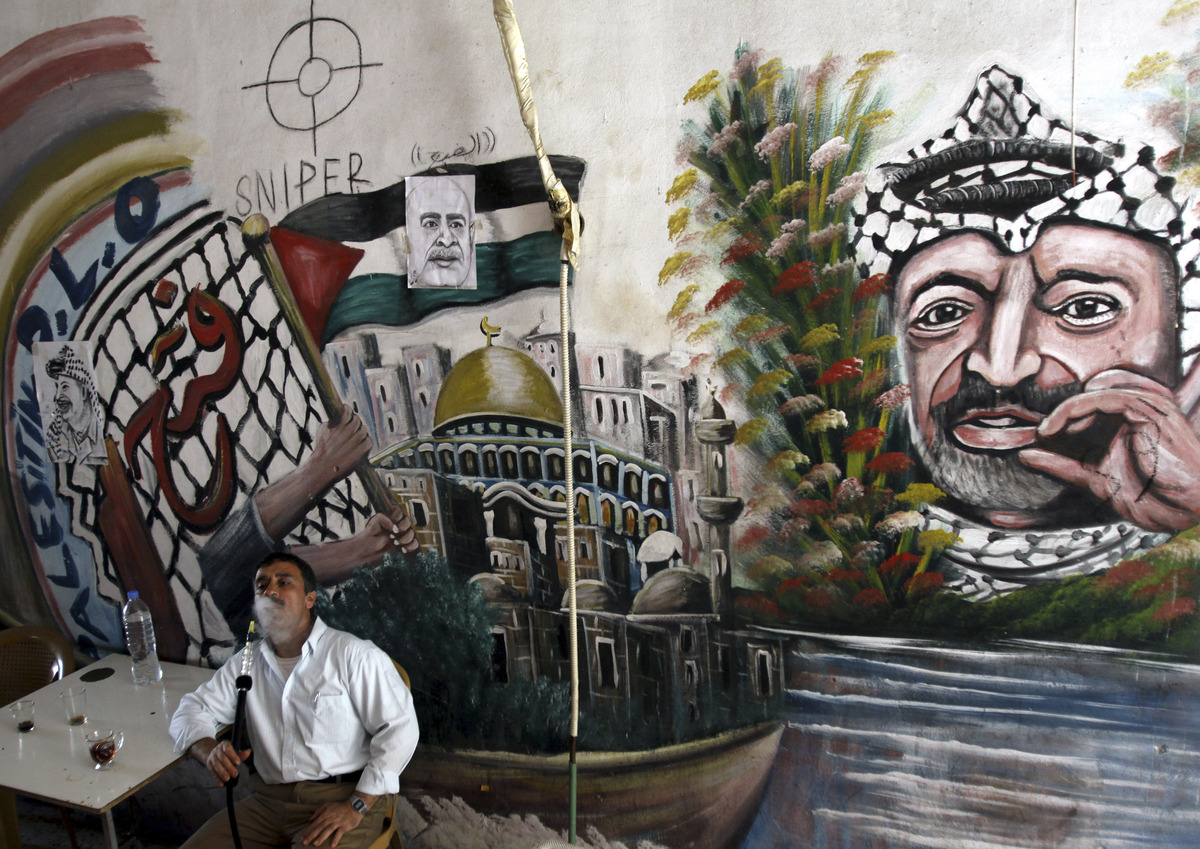 A Palestinian man smokes a nargileh (waterpipe) next to a mural of the late Palestinian leader Yasser Arafat in a coffee shop in the West Bank city of Jenin in September.

Walt and Perle say they agree the climate is not conducive to Israeli-Palestinian peace talks, though they disagree on how to spread the blame for the stalled efforts. Harman says the matter is so pressing that the U.S. should pursue a resolution regardless.

Walt says it's unlikely for either candidate, if elected, to make a big push for negotiations.

"It is not a promising time to pursue Israeli-Palestinian peace because with all the other uncertainty in the region ... you would not expect anyone to be willing to make bold moves there," Walt says.

Harman says there should nevertheless be a major attempt, given what she calls the urgency of the situation — for everyone involved. She says she's been disappointed in the Obama administration and all governments in the region for bringing too many conditions to the table.

"All the people in the region would win if this could happen, and I do think that Israel's survival as a Jewish state is very dicey if this doesn't happen, and also because of other challenges from a neighborhood that's in turmoil," she says.

Perle says he doesn't think the next president would succeed in pushing an agreement.

Perle says the Palestinians are holding up the process by not accepting the existence of a Jewish state.

"Until you begin to change the mentality, you're not going to see much of a change on the diplomatic surface," he says.

Walt disagrees, saying the Palestinians have been willing to negotiate but have meanwhile watched the Israeli government expand settlements in the West Bank.

"This is a case where if the United States were able to bring pressure to bear both sides — not just one — we might have some hope of getting a diplomatic solution," he says. 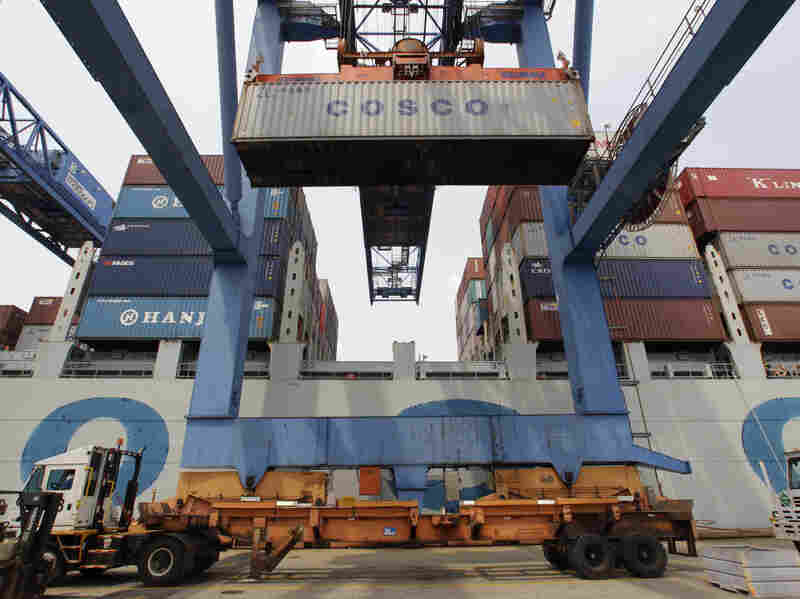 A container ship from China is offloaded at Massport's Conley Terminal in the port of Boston in July. Trade issues with China has been a major talking point for the presidential candidates. Stephan Savoia/AP hide caption 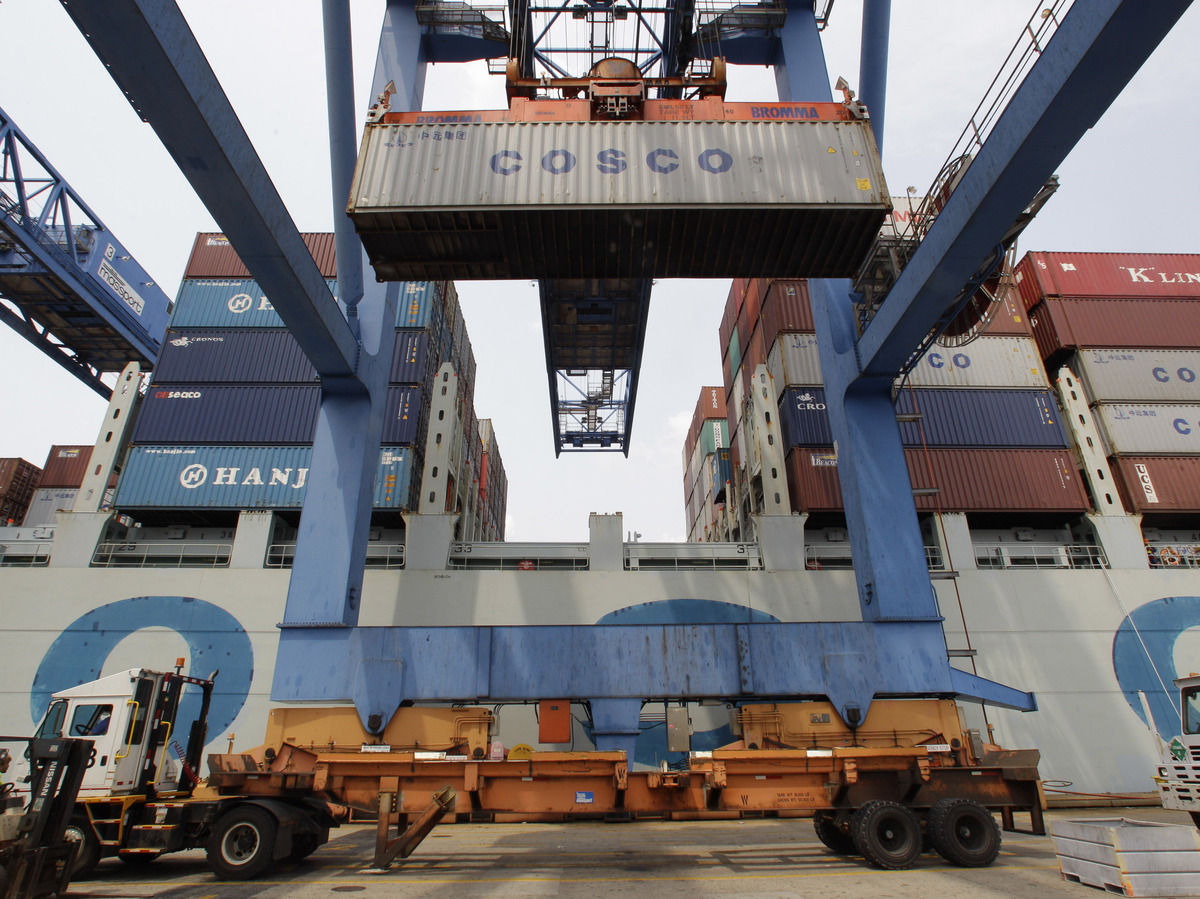 A container ship from China is offloaded at Massport's Conley Terminal in the port of Boston in July. Trade issues with China has been a major talking point for the presidential candidates.

Tough On China, To An Extent

On China, the panelists mostly agree. As it grows as a world power, China has to be a friend of the U.S., they say. Tough talk is expected Monday, but whoever is elected will most likely continue to pursue an amicable relationship while pushing back on certain trade issues, as Obama has been doing.

"I think we have much more to gain than we have to lose by building our economic and diplomatic and cultural ties with China," Harman says. "This is just like Iran: There can be a very bad story, or hopefully we can find a way to make the story better."

She says helping with a treaty in the South China Sea could help our standing in the region, for example. Tensions have risen in sea, home to islands claimed by China, Vietnam, Philippines and other Asian nations.

"I just would hope that in this case, our narrative trumps just the exercise of military power," Harman says. "And people in the region see us as a friend, not as a potential antagonist."

Obama, Romney In Tug Of War Over China Trade

Perle says while we shouldn't consider China an enemy, the U.S. can't ignore the problems it faces, namely intellectual property infringements and a centrally managed economy, which can hurt China's trade partners. Walt says the next president will take on those issues, but not in the way they've been talking about.

"In terms of the immediate four years, there will be a lot of talk on Monday about trading issues and fairness, but I think, again, whoever ends up being president will quickly understand that launching a trade war with China would be bad for business — bad for them, bad for us," he says. "So we may see a lot of hot rhetoric on Monday, but that's not really what's going to happen here."

But Walt says the candidates have a motivation for their rhetorically strong stances against China: U.S. voters in both parties are concerned with protecting American jobs, and it's a politically appealing point to make. He says that even if Romney were elected, he'll follow a similar path to the one Obama has already laid out.

"In fact, Obama has run a pretty hawkish foreign policy toward East Asia," Walt says, adding he doesn't expect much of a difference between the candidates on the approach.