Accessibility links
For Many Florida Ex-Cons, Voting Booth Is Off-Limits Florida's clemency board has made it harder for former felons to win back their voting rights.

Across the nation, the number of people who have lost the right to vote because of a felony conviction has grown dramatically in the past three decades. Currently, almost 6 million people don't have that right — and about 1.5 million of them live in Florida.

While some states are making it easier for felons to get their voting rights back, Florida has taken the opposite approach — and the path for former convicts trying to get those rights back is often an arduous one.

Four times each year in the state capital, Tallahassee, Florida Gov. Rick Scott sits in a windowless basement room full of convicted felons. Robbers, sexual molesters, drunk drivers, drug traffickers and others walk to the lectern, one by one, to ask the governor to restore his or her right to vote.

Scott and members of the Board of Executive Clemency pepper the applicants, all of whom have served their sentences, with questions like, "When was the last time you drank, and how much did you drink?"

It's largely the governor who decides, on the spot, the fate of each ex-con. And for many, the outcome isn't good — especially for those applicants who didn't show up. Most often, they are summarily denied the moment their names are read aloud. 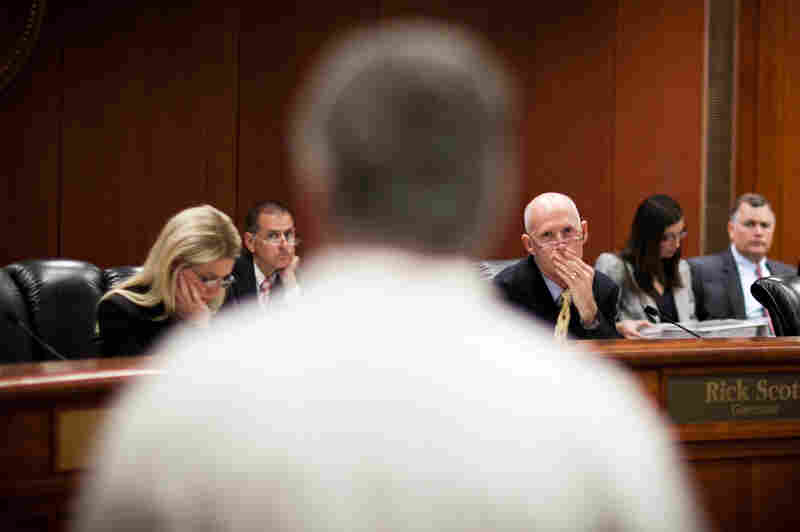 Florida Gov. Rick Scott listens to testimony from felons attempting to restore their right to vote at a clemency hearing in Tallahassee, Fla., in June. Michael Ciaglo/News21 hide caption

Limping, Richard Flores slowly walks to the microphone with the aid of a cane. In 1994, Flores was a 29-year-old software engineer. Charged with vehicular homicide in Sarasota, he was found guilty in a car crash that killed two people. He served one year of house arrest — and has been waiting years for this moment.

"I'm really just here to show my respect for the board," Flores says. "This is very important to me."

On this day, Flores is a lucky man — Scott has decided in his favor. At age 47, Flores can now vote, hold public office or serve on a jury. There are other things he is also eligible to do, like become a lawyer or join the military.

It's been 18 years since he last voted. Flores says he's not asking for sympathy. But, he says, "even if someone is despicable, they should be able to vote."

Disenfranchisement laws are as old as the United States. In Florida, they were created in the 19th century to keep newly freed slaves from voting, and remain on the books today. The state's clemency laws, the subject of intense debate since the 2000 presidential election, have also swung back and forth over the years.

Former Gov. Charlie Crist, known as a progressive Republican at the time, changed the state's clemency laws in 2007. He worked to streamline the restoration of rights for felons convicted of nonviolent crimes, and restored the rights of close to 6,000 felons during his last year in office.

But last year, Scott, also a Republican, changed the law. Today, all ex-felons — even those convicted of a nonviolent offense — must wait five or seven years before they can apply for restoration. This year, fewer than 200 former felons have had their civil rights restored.

For Ex-Felons, Limited Rights Mean A Future On Hold

Currently, the state has a backlog of more than 19,000 applications, and about 10 percent of the Florida voting population is denied the vote. That level of disenfranchisement has raised concerns about the disproportionate percentage of voters in poor and minority communities.

"It's a basic premise of a representative country — if a class of people are allowed not to vote, then politicians don't have to care about that class of people," Flores says.

"The felon makes the decision to violate the law, and that's why they lose their right to vote," says Hans von Spakovsky, a legal fellow at the conservative Heritage Foundation in Washington, D.C. He says he supports the Florida governor's approach.

"I don't think there's anything wrong with a state, such as Florida, putting in a waiting period of five to seven years so that they can see that the felon has basically re-entered the social contract and that they have turned over a new leaf," von Spakovsky says.

Across the nation, clemency laws vary widely. Vermont and Maine allow prisoners to vote while incarcerated. Many states have moved toward automatic restoration for ex-felons when they get out of prison. Kentucky, Iowa, Virginia and Florida have the nation's toughest laws.

Florida's clemency board officials — including Gov. Scott and Attorney General Pam Bondi, who crafted the 2011 changes — declined requests to speak with NPR. But in a written statement to NPR, the governor's press secretary said the changes are largely based on a law-and-order philosophy.

"Gov. Scott feels that convicted felons need to have an opportunity to show they can be law-abiding members of society before those rights are restored," the statement says. 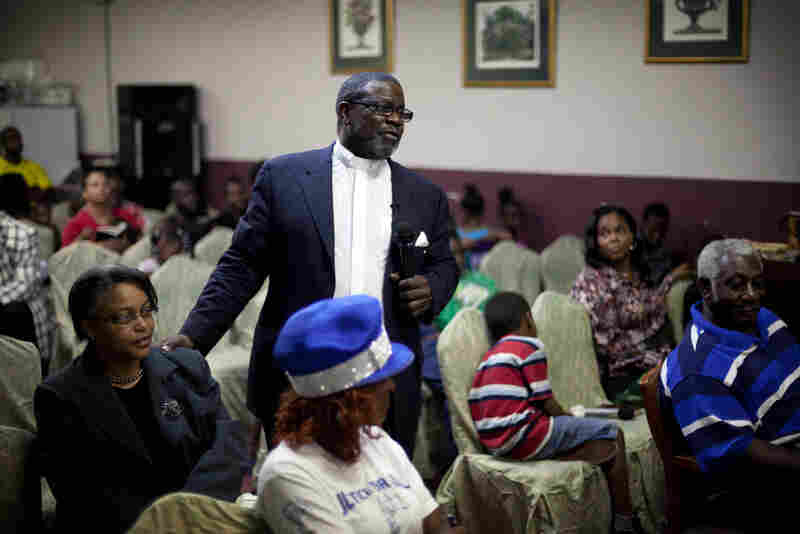 Eddie Walker, a pastor at In God's Time Tabernacle Church in Orlando, Fla., was once a crack addict. He says about 60 percent of his small congregation's members have lost their ability to vote. Michael Ciaglo/News21 hide caption 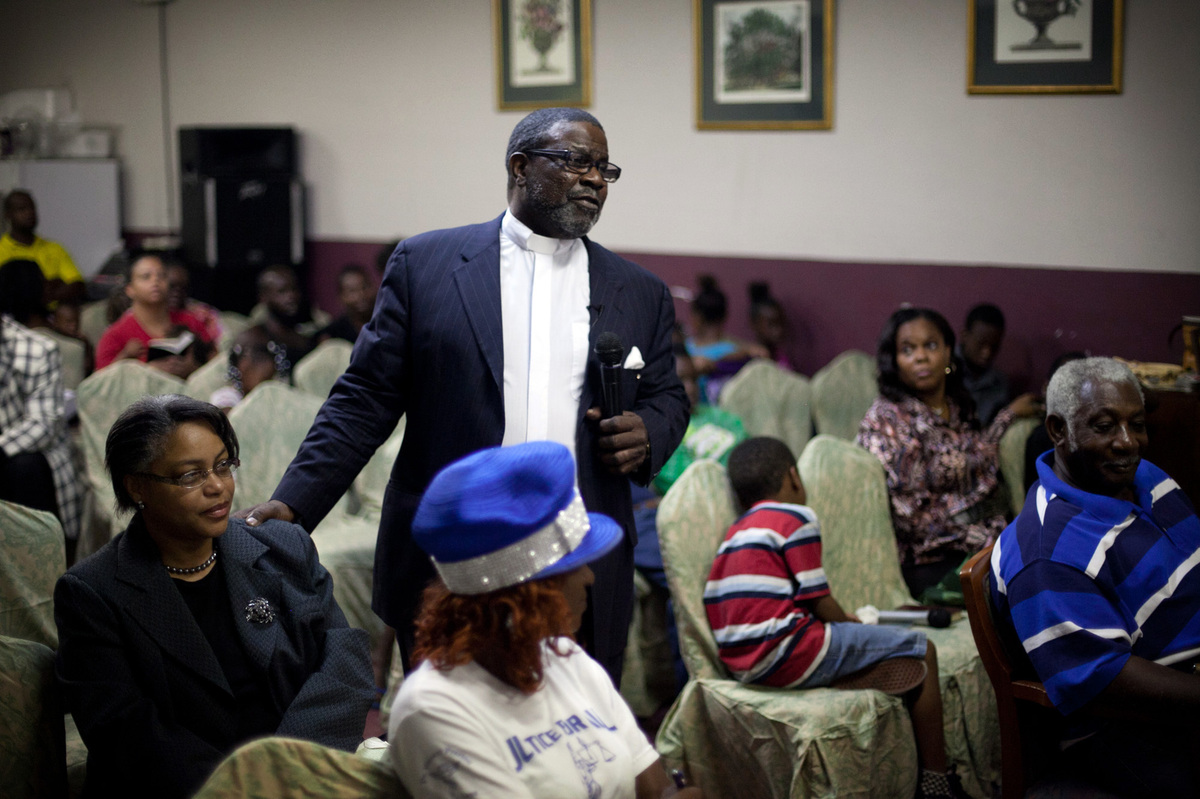 Eddie Walker, a pastor at In God's Time Tabernacle Church in Orlando, Fla., was once a crack addict. He says about 60 percent of his small congregation's members have lost their ability to vote.

'Not Even A Citizen'

In the Orlando neighborhood of Parramore, Eddie Walker, a pastor at In God's Time Tabernacle of Jesus Christ, preaches on a subject close to him. About 60 percent of his congregation — a big chunk of this neighborhood, he says — doesn't have the right to vote.

Walker is one of them. He spent five years in prison for drug trafficking after a 1995 conviction. "I've been feeling like I'm not even a citizen since I got out of prison," he says.

Walker's makeshift church is housed in a building the size of a school classroom. Many congregants are struggling with addiction, recovery, poverty and prison.

Walker says it's not just individuals being punished in Florida, but entire communities like his. He says people here worry about covering basic needs like food and shelter for their families, and that most have given up.

But Walker says he hasn't. "If you can't see the change in Eddie Walker, it's because you are not looking for a change," he says.

For many here, including Walker, restoration of voting rights won't come for years. But for now, all Walker asks is for people to see the person he is today.

This story is part of the student journalism project News21's voting rights coverage.