Accessibility links
Can U.S. Still Lead In Economic And 'Soft' Power? When the presidential candidates hold their final debate Monday night, this one on foreign policy, they'll likely be asked to define their vision of America's role in the world. As the wars in Iraq and Afghanistan wind down, that role may shift back to economic and cultural leadership, scholars say.

Can U.S. Still Lead In Economic And 'Soft' Power?

Can U.S. Still Lead In Economic And 'Soft' Power? 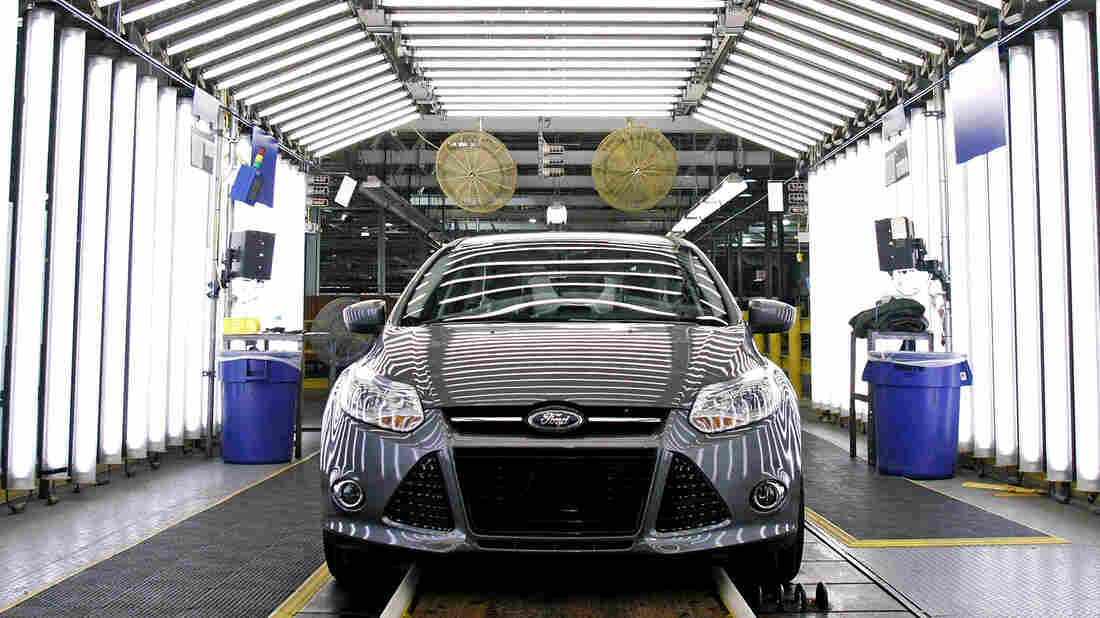 A Ford Focus on the assembly line in Wayne, Mich. "We have a lot going for us; we've got our problems, but others have problems that are as bad or worse," says Nariman Behravesh, chief economist at IHS Global Insight. Bill Pugliano/Getty Images hide caption

At Monday night's foreign policy debate, the first round of questions for the presidential candidates will involve "America's role in the world."

The answers from President Obama and former Gov. Mitt Romney likely will focus on military readiness and anti-terrorism efforts. That's what most Americans would expect to hear, given that their country has been involved continuously in overseas combat since the terrorist attacks of 2001.

But the U.S. role in the world is shaped by much more than just its ability to project military might. Leadership also is defined by economic power, as well as "soft" power — for example, the country's ability to attract and persuade people to adopt American values, according to Joseph Nye, a Harvard professor.

In the early 1990s, Nye's book Bound to Lead: The Changing Nature of American Power got people talking about the need to further develop economic and soft power. His ideas got traction because — with the Berlin Wall coming down in 1989 — many Americans were eager to explore new ways to lead in a post-Cold War era.

But after terrorists slammed airplanes into the World Trade Center and the Pentagon on Sept. 11, 2001, the conversation turned back to military strength. Drones and Humvees seemed far more important than the attractive powers of Hollywood movies or mobile phones.

A Shift Back To Economic Leadership?

Now, with the Iraq War over and U.S. military involvement in Afghanistan winding down, Nye says the focus may be shifting back to those other two pillars — economic and cultural leadership.

"In the 21st century, the Iraq War caused a big drop in American soft power," Nye said. That's because many people in other countries saw the United States as being too aggressive, he said.

And then in 2008, when the subprime mortgage crisis hit, U.S. economic power declined too. Before the financial crisis, "there was the idea that Americans really knew how to run an economic system," he said. After the crisis, not so much.

But now, the wheel is turning again because both China and Europe are struggling with economic growth.

"If you compare us with Europe's economic system, we're doing pretty well," Nye said. "The dollar is still the safe haven."

And U.S college campuses are bolstering American soft power. "Most Chinese leaders have a kid at a university in the United States," Nye said. At this point, America is again the soft-power global leader "in everything from Hollywood to Harvard," he added.

"We still have the largest economy in the world; we are still the No. 1 export destination; we still have lots of innovative companies, like Apple; we have the world's reserve currency; we have a dynamic economy, with oil and gas production increasing," Behravesh said.

"We have a lot going for us," he said "We've got our problems, but others have problems that are as bad or worse, and I include China in that. They have had a huge deceleration in their growth."

Dealing With The Debt

But going forward, America's role in the world will be largely shaped by how well Congress handles the budget deficit problems in coming months, he said. As other countries, especially in Europe, grapple with the problem of too much government debt, people around the world are looking to the United States for moral leadership, he said.

If the United States shows that it's possible for democracies to discipline themselves and control their debts, then its economic and soft power may surge, Behravesh said.

As part of overall U.S. foreign strategy, "we need to tackle our domestic deficit problem," he said.

"If we deal with it in a constructive way, people will view us favorably," Behravesh said. "It's a manageable problem. We can do this."