Accessibility links
Kendra Morris: Skateboards And Karaoke Machines When Kendra Morris was a little girl growing up in St. Petersburg, Fla., she would hide in her closet and sing along with her karaoke machine. Later, when she moved to New York to chase her music dreams, it was back into the closet with an eight-track recorder she'd bought. 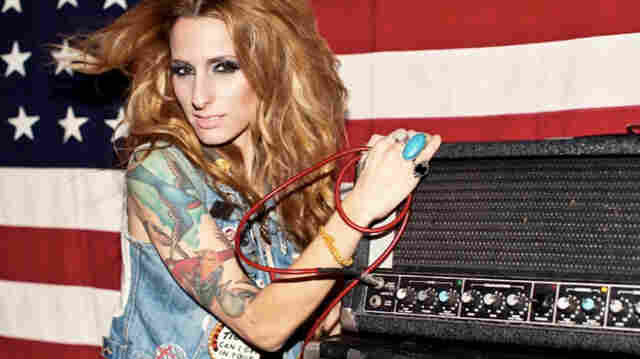 When Kendra Morris was a little girl growing up in St. Petersburg, Fla., she would hide in her closet and sing along with her karaoke machine. Later, when she moved to New York to chase her music dreams, it was back into the closet with an eight-track recorder she'd bought. Now, the 31-year-old is out with her first full-length album, a lush, moody mix of neo-soul called Banshee.

"I remember I got a karaoke machine for Christmas, and I had all these cassette tapes," Morris says. "And I would tape over the edges, so I could record over those. I started learning how to bounce vocals. I remember realizing that if I recorded on one and then took another tape and flipped the other one to the other side of the karaoke machine, I could record another voice on top of that.

"You know, as I've gotten older, [I've] been able to place things in front of me, things that have developed me as an artist," Morris says. "Looking back, I can see certain things that really developed my style, like having an ear for different melodies, different harmonies. I strongly believe that in one song, there can be so many songs and you can say so many different things, whether it's with a melody or whether it's with a lyric within a lyric, and then so many hidden things, and then things upfront."

"I got that [song] from skateboarding. I used to skateboard when I was 15 for a brief second," Morris says, laughing. "It didn't go well. I did it to meet guys, and that didn't go well, either. But with skateboarding, you're gliding, you're going fast, sometimes you're on a ramp and you just feel on top of the world. But if you hit a pebble, you go flying off your skateboard and there's nothing to catch you. It's the pavement. It hurts. With a concrete wave, the metaphor to that is just following through with a moment of what feels good. It might wreak a lot of havoc, but it's so worth it for that second of being on the top."

Like many aspiring singers of her generation, Morris auditioned for American Idol. While working at a restaurant in St. Petersburg, Fla., she remembers watching the first season and thinking, "Well, I'll go try out for American Idol. Why not?" Morris and her dad drove to Miami and stood in line for what she thinks was 27 hours. At long last, she walked in, sang three notes of Marvin Gaye's "I Heard It Through the Grapevine," and the producers of the show just said, "Next."

"I was heartbroken, but you know, I've had a lot of heartbreaks," Morris says. "You just get back up and keep doing it. You learn from those things."

Morris still bartends on weekends in New York City, but maintains the dream of making music.

"I do it because I don't know what else I'd do," Morris says. "I do it because it makes me happy. I can honestly say that nothing was ever handed to me. I bartend on the weekends, and I don't talk a lot about that because I can be really hard on myself, like, 'I still shouldn't be doing this other job.'

"You know, I was thinking as I was getting ready to come here today, and I was thinking how far I've come," she adds. "And I was thinking of this younger me and what I would say to that me. This sounds so cheesy, but it's really true — it's the journey, it's going and doing it and taking all those experiences. They're a part of your story, and everyone's going to have a different way that they get to where they're going. There's no right or wrong way. The only way you're not going to make it is if you give up. That's the only way you won't make it."