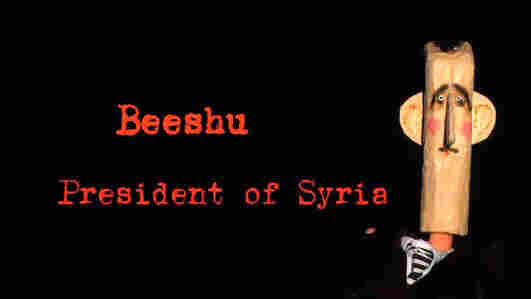 Syrians opposed to President Bashar Assad have been posting YouTube videos mocking him. The episodes are called Top Goon, and the Syrian president goes by the name Beeshu. The work is done anonymously because those behind it fear they could face retribution from the Syrian government. YouTube hide caption

"I'm not crazy," the figure says, standing alone in a dark room, as if trying to convince himself.

"I'm not crazy?" almost a question this time.

And, of course, he sounds crazy.

Meet Beeshu, an avatar of the embattled president of Syria, Bashar Assad, rendered in papier-mache and mounted on someone's finger. He's the star of the show Top Goon and the inspiration for its title.

The show — a darkly funny series about a group of Syrian characters rendered as finger puppets — was recently created and produced by Syrian activists and posted on YouTube.

But to this day, no one knows their real names.

That's because the regime in Syria is still standing, and those who want to bring it down face detention, beating, sometimes torture, and sometimes death.

In other words, the Top Goon team is totally underground.

Watch a few episodes, and you'll understand why. Episode 2, "Who Wants to Kill a Million?" is a clear reference to the tens of thousands of people who have died at the hands of the regime since the anti-government uprising began more than a year and a half ago. 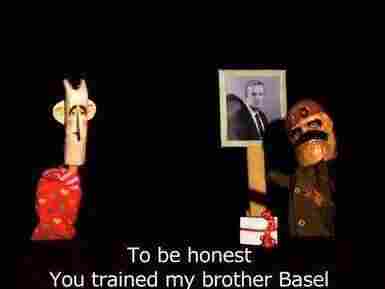 This episode of Top Goon featured the Syrian president on the left, a member of the security forces on the right, and a photo of the former president, Hafez Assad, who is the father of the current leader. YouTube hide caption

In Episode 5, Beeshu's own children begin protesting against him, asking him why the president of the country has to kill so many.

In Episode 8, Beeshu's father, the longtime dictator Hafez Assad, comes back from the dead and tells him to use maximum force.

The reference is historic. Hafez Assad employed a similar tactic in a brutal massacre of Islamists and civilians in the city of Hama in 1982. But it's also funny. Rather than making a Hafez Assad puppet, the show's creators posted the dictator's ubiquitous photo, shown in government buildings and homes around Syria, on a stick. And they made the stick talk.

That's the hook of the series. It's simultaneously low budget, smart, hilarious, dangerous — and sad.

In Episode 7, the character known as Shabih, or "thug," interrogates The Peaceful Protester and beats him with a rope.

"You want freedom?" he asks. "When you get your freedom, we'll still be here. We'll just be wearing white suits and carrying a laptop and saying, 'Freedom.' "

Such humiliation is an experience that most of the show's creators have lived through. You can see it in the artful way Shabih's chin sits askew in a sinister grimace. These guys have looked into the faces of their captors.

Meeting One Of The Creators

We recently managed to meet one of the creators of Top Goon. We can't say where we met. He uses a fake name, "Jamil al Abyad," or "beautiful and white." He says the creators are actually moving onto new projects, more somber theater pieces that reflect the downward spiral of the conflict inside Syria.

The Syrian conflict is inspiring a creative movement among artists using their craft to cope with what's happening around them. Kelly McEvers recently attended a performance of one-act plays based on the actual words of Syrians, staged in a bunker-like space in Beirut, Lebanon. Listen to that story.

As we sit and swat mosquitoes, Jamil casually asks if we want to see the puppets who make up the cast of Top Goon.

"Can we really see them?"

It's as if we are talking about someone famous. Jamil laughs and goes to get The Bag, and my heart starts pounding. Being found by Syrian authorities with these puppets could be worse than being found with a rocket-propelled grenade in rebel territory. To insult the Syrian leader in such a personal way is tantamount to treason. It's no exaggeration to say you could be killed for it.

He pulls them out, cradling each one. They're bigger than I thought, and more crude. I, of course, want to see the thug.

"This one is special," Jamil says of the Shabih. "They had to carve him out of wood to get the chin just right."

I hold the thug for a few seconds. It must feel nice to see him rendered so small, to hold him in your hand and crush him just a little.

Jamil says he hopes to take the show and perform it live, inside Syria — especially for people who've been the hardest hit by an uprising that has turned into a war.

"Those are the ones who deserve to laugh," he says. "I bet they haven't laughed in a long time."

Lava Selo contributed to this report