Accessibility links
Vote While You Shop: 'Pop-Up' Poll Sites Sweep Iowa In Iowa, it takes just 100 signatures to petition for a temporary "satellite" voting station. Campaigns are establishing the pop-up sites at grocery stores and college campuses to encourage early voting at convenient times and locations. 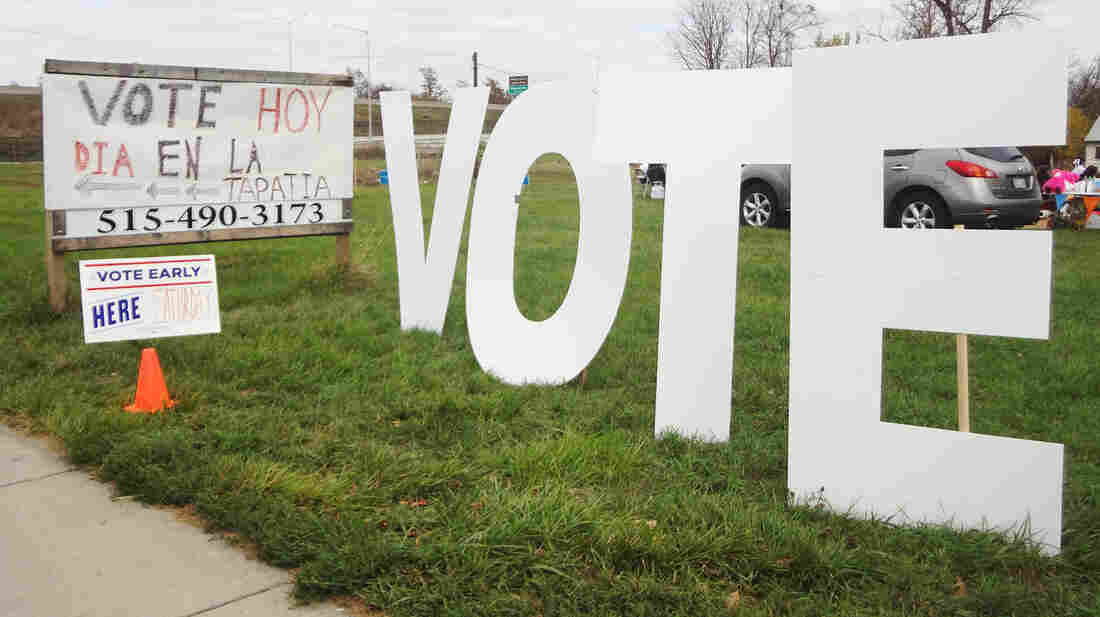 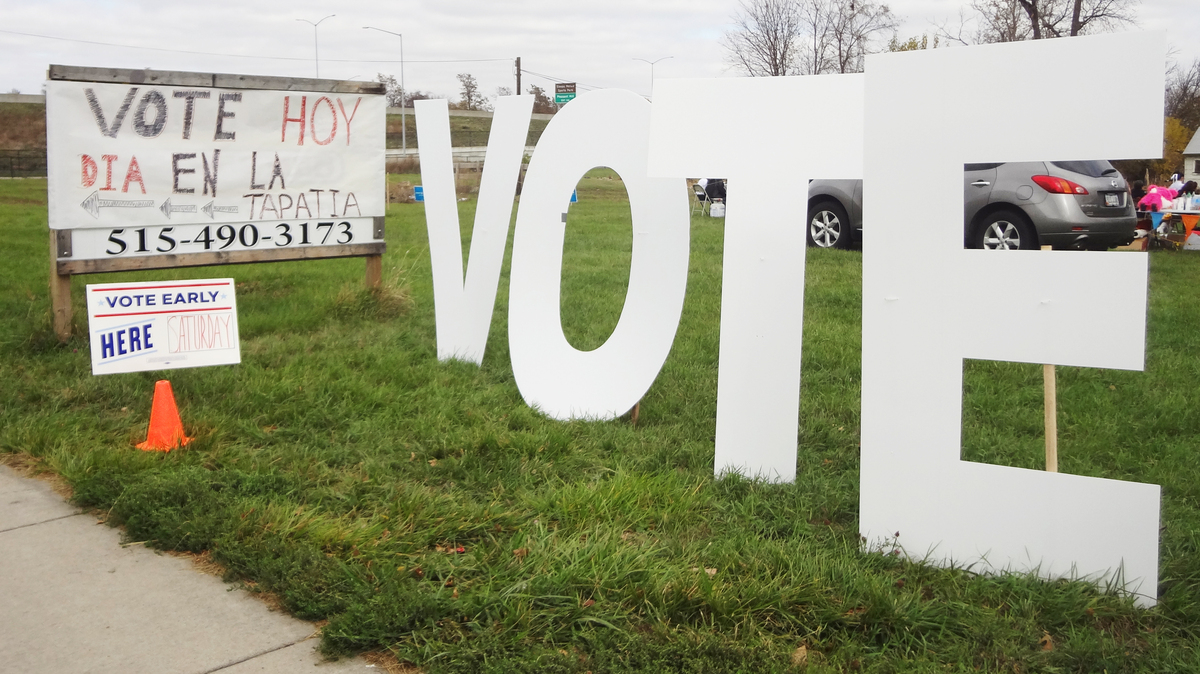 In a number of swing states, early voting means many people are already casting their ballots. Typically, that entails voting by mail or visiting a county elections office.

But in Iowa, satellite voting — where "pop-up" polling stations allow people to vote at convenient times and nontraditional locations — is growing in popularity.

On a recent afternoon in a Des Moines strip mall, families are stopping in at La Tapatia Tienda Mexicana for their weekly grocery haul. But today, some are doing more than shopping: For just one day, the Latino grocery has been transformed into a satellite polling location.

Mary Campos sits in her walker at the store entrance, encouraging store patrons to cast ballots. "Buenos dias," she tells incoming shoppers. "You can go on in and vote right now."

It's literally a one-stop-shop, Campos says, where you can pick up dinner, register and vote, all in one shopping trip.

"People work; they have two jobs," Campos says. "We don't know what it's gonna be like on Nov. 6. I've encouraged absentee ballots," she adds, "but I think this is wonderful, to have satellite places where they can go vote."

Shopper Ernesto Garcia says he was worried about when, and where, he would be able to vote. "I'm a truck driver, so I don't know where I'm gonna be able to go," he says. When he heard he could cast his ballot at LaTapatia, he headed there. 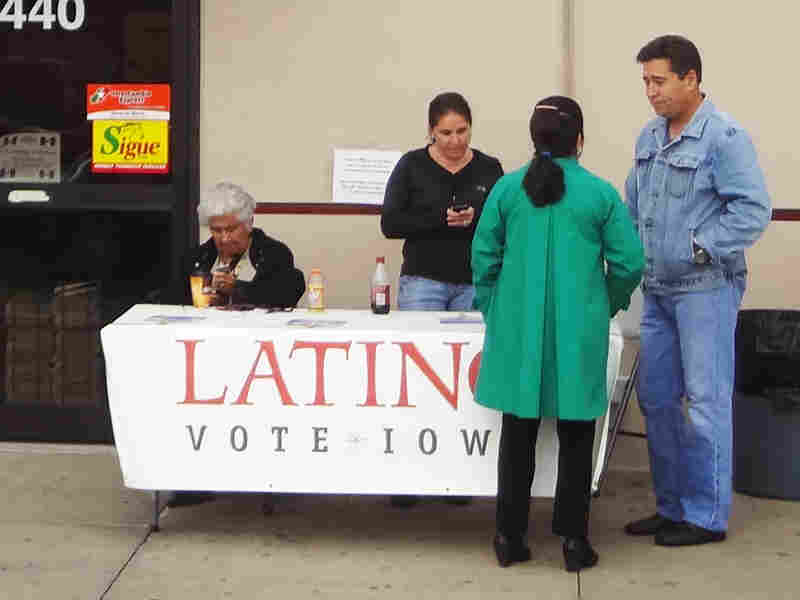 Democrats have been particularly active in establishing satellite locations. This grocery store location was set up by the Obama campaign. Sandhya Dirks for NPR hide caption 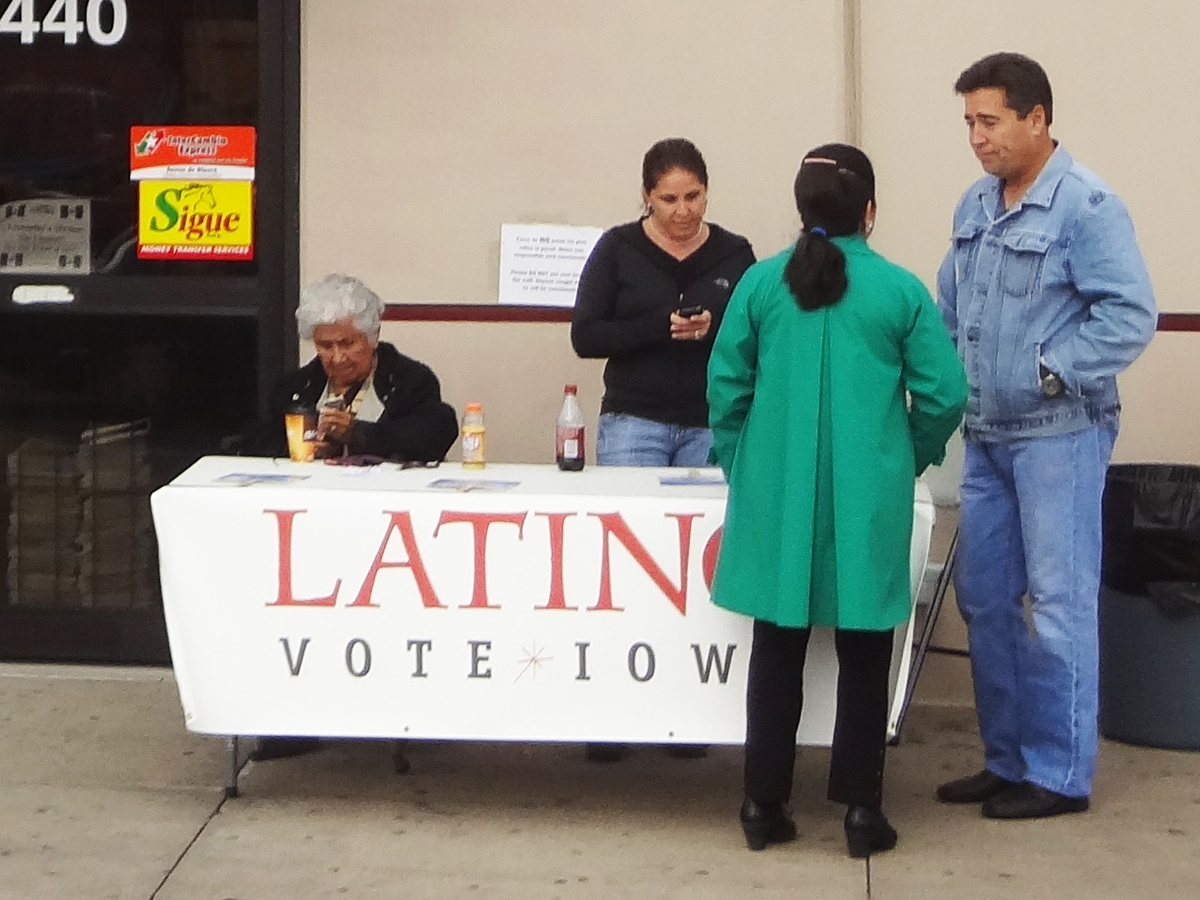 Democrats have been particularly active in establishing satellite locations. This grocery store location was set up by the Obama campaign.

A Big Push For Democrats

In Iowa, only 100 signatures are required to petition county officials to set up a satellite voting spot. The polling booth at La Tienda was petitioned by the Obama campaign, and the Democrats are staging events to highlight the pop-up voting effort. Across the street, Latinos for Obama is hosting a block party featuring music, tamales and an out-of-state guest: Los Angeles Mayor Antonio Villaraigosa.

"Today is a little rally to make sure we all go and vote early," Villaraigosa says. "Because I know, we've heard it: 'Oh Villaraigosa, I forgot to vote, I was working.' "

But there are no excuses this time, he says. "You can vote today; you can vote across the street."

The Democrats are also targeting college students across Iowa. Fifty-three polling booths are being established on campuses across the state over two weeks this month.

Dennis Goldford, a political scientist at Drake University, says that's a savvy move on the Democratic Party's part, "because so much of the Democratic turnout is younger voters and minority voters, who tend to be less likely to vote."

Tom Szold, a spokesman for the Republican National Committee in Iowa, says the GOP has also petitioned Iowa counties for satellite voting.

"We mostly put those in areas with low- to mid-propensity-GOP voters," Szold says. "So the type of people who lean to the right, but aren't necessarily the ones that are going to vote for the Republican candidates on Election Day."

Szold acknowledges that Democrats tend to put greater emphasis on early voting, because Republicans typically win when it comes to actual turnout on Election Day itself.

Iowa Voters Who Are — Literally — Done With The Election

A Polling Station On Wheels

But satellite voting isn't just about partisan politics. While some locations are sponsored by parties, others are designed to draw in new voters, regardless of party.

In a parking lot outside Legends Sports Bar in Marshalltown, a row of Harley-Davidsons and several pickup trucks are lined up near a trailer emblazoned with a huge "vote here" sign.

The trailer is the first mobile voting booth in Iowa. This polling place on wheels was set up by Marshall County Auditor Dawn Williams. She borrowed a race car trailer, and organizers have been parking it in front of a Hy-Vee grocery store, a bar, and a Wal-Mart.

"We've caught lots of nontraditional voters. You can just tell when they come in that they're nontraditional," Williams says, who stopped by the Wal-Mart location. "I believe that should be the purpose [of] satellite voting."

Like so many others who voted at the trailer today, Williams says getting here was easy — she was on her way to shop at Wal-Mart anyway.