Accessibility links
In Animal Kingdom, Voting Of A Different Sort Reigns "One common property we see in animal groups from schooling fish to flocking birds to primate groups is that they effectively vote to decide where to go and what to do," says an evolutionary biologist. But like human leaders, successful animal leaders know they can't get too far ahead of their constituents. 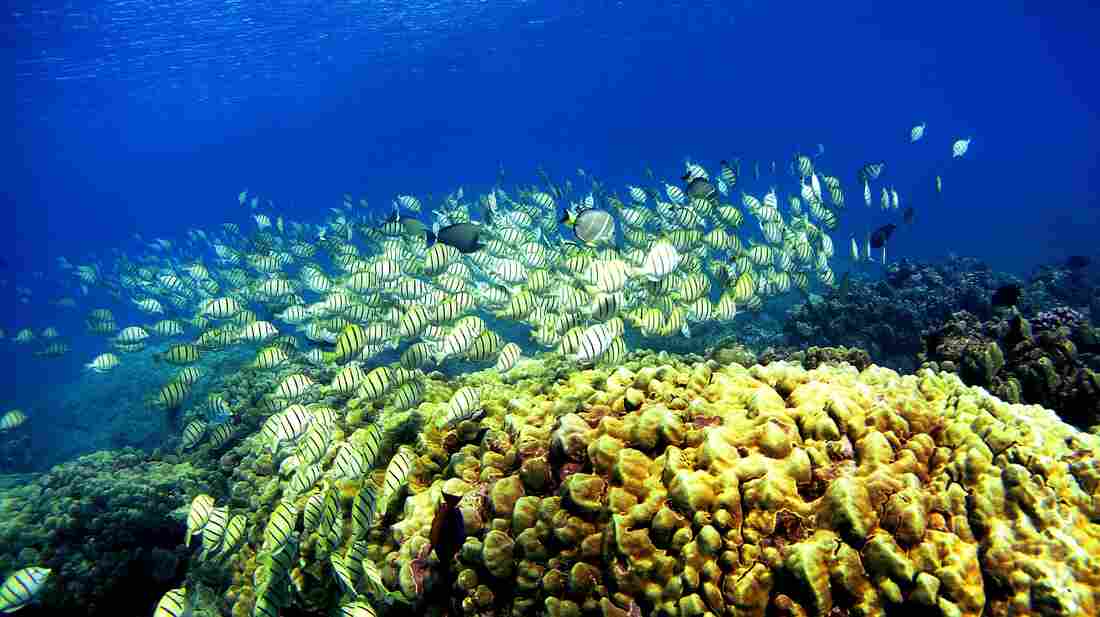 A school of manini fish passes over a coral reef at Hanauma Bay in 2005, in Honolulu. Researchers say schooling behavior like the kind seen in fish helps groups of animals make better decisions than any one member of the group could. Donald Miralle/Getty Images hide caption

As part of NPR's coverage of this year's presidential election, All Things Considered asked three science reporters to weigh in on the race. The result is a three-part series on the science of leadership. In Part 1, Alix Spiegel looked at the personalities of American presidents.

Voters could learn some things about choosing a leader from a fish. Or a chimp. Or an elephant.

That's because the animal kingdom, despite its name, tends to operate more like a democracy, says Iain Couzin, an evolutionary biologist at Princeton University.

"One common property we see in animal groups from schooling fish to flocking birds to primate groups is that they effectively vote to decide where to go and what to do," Couzin says.

When one fish heads toward a potential source of food, the other fish vote with their fins on whether to follow, he says. And this highly democratic process helps animals make decisions as a group that are better than those of any single member.

Successful animal leaders know they can't get too far ahead of their constituents, Couzin says.

"They seem to simply reconcile their own goal-oriented behavior with this tendency to align with others," he says. "Because if you don't tend to be influenced by others, you then leave the group behind, and you may get eaten by predators, or you lose the benefits of group living." 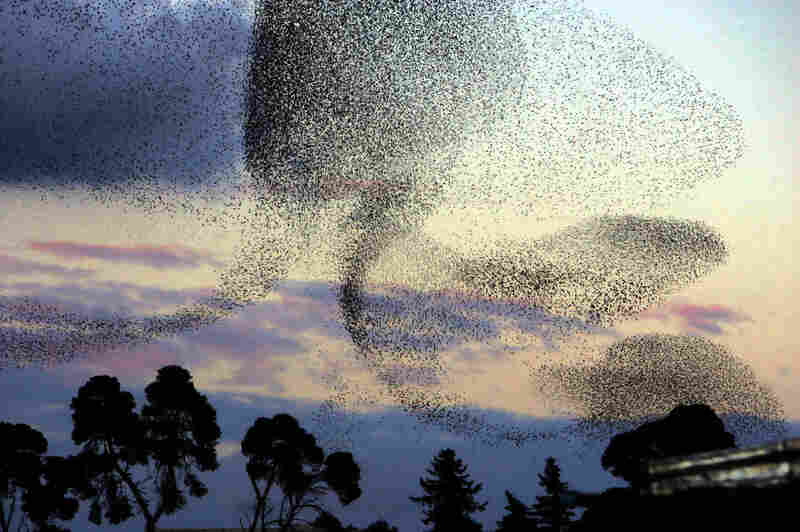 A large flock of starlings flies over a park at sunset in Algiers, Algeria, in 2006. Millions of birds migrate every year, arriving from Europe and crossing into Africa. Fayez Nureldine/AFP/Getty Images hide caption 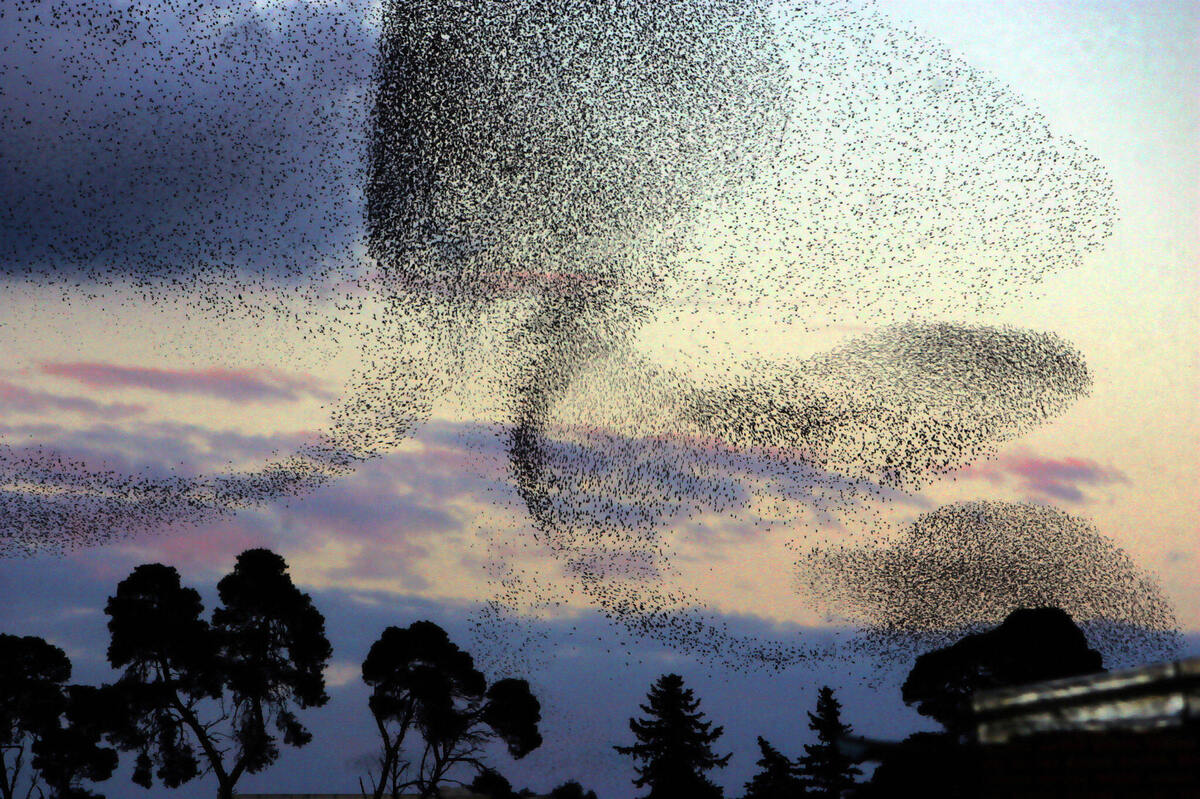 A large flock of starlings flies over a park at sunset in Algiers, Algeria, in 2006. Millions of birds migrate every year, arriving from Europe and crossing into Africa.

Findings like this are relevant to humans because we carry a lot of evolutionary baggage with us into the voting booth, Couzin says. And when it comes to leadership, he says, we are most like animals that live in groups and depend on cooperation to survive. And these groups tend to pick cooperative leaders.

So what about the idea that it's just the biggest or strongest animal in a group that calls the shots?

It's rarely that simple, says Mark van Vugt, an evolutionary psychologist from the VU University in Amsterdam. Take chimps, for example, he says.

"In chimpanzees, it's not necessarily the physically strongest individual who seizes the control over the group," van Vugt says. "It's usually the more cunning individual, someone who forms his coalitions well."

Animal leadership also demonstrates how groups choose different leaders for different situations, he says. Among elephants, for example, the de facto leader is usually the oldest female. But that can change, van Vugt says.

"When the group is attacked, it might be one of the dominant male members who takes control," he says. "But when it comes to knowledge problems and particularly where to find water, they then turn to the oldest female."

Some animal leaders have traits that voters might wish all human leaders had — like unfailing honesty, van Vugt says.

Honeybees are a good example, he says. Their scouts lead by finding a food source and then communicating the location to other bees through something called a waggle dance.

"The interesting thing about it is in the signaling of the scout bees, there is no deception whatsoever," van Vugt says. "They want to do what is best for the hive. And I think that is a little bit dissimilar to humans."

Or chimps, whose leaders are often accomplished liars.

One way animals and people are clearly alike is that both are capable of choosing a bad leader, says Couzin.

"It's not necessarily the most talented or intelligent individual that ends up in a leadership position," Couzin says. Unqualified animals sometimes rise to power, he says, but most of the time they don't last long.

And animals don't wait for the next election to find a replacement, Couzin says.