Accessibility links
Newspaper Endorsements: Prized, But Often Ignored Voters say they put little to no stock in the editorials, even when they fervently agree with those endorsements. That's reflective of newspapers' status in many markets. But one Republican expert says a newspaper endorsement can be effective at persuading undecided voters. 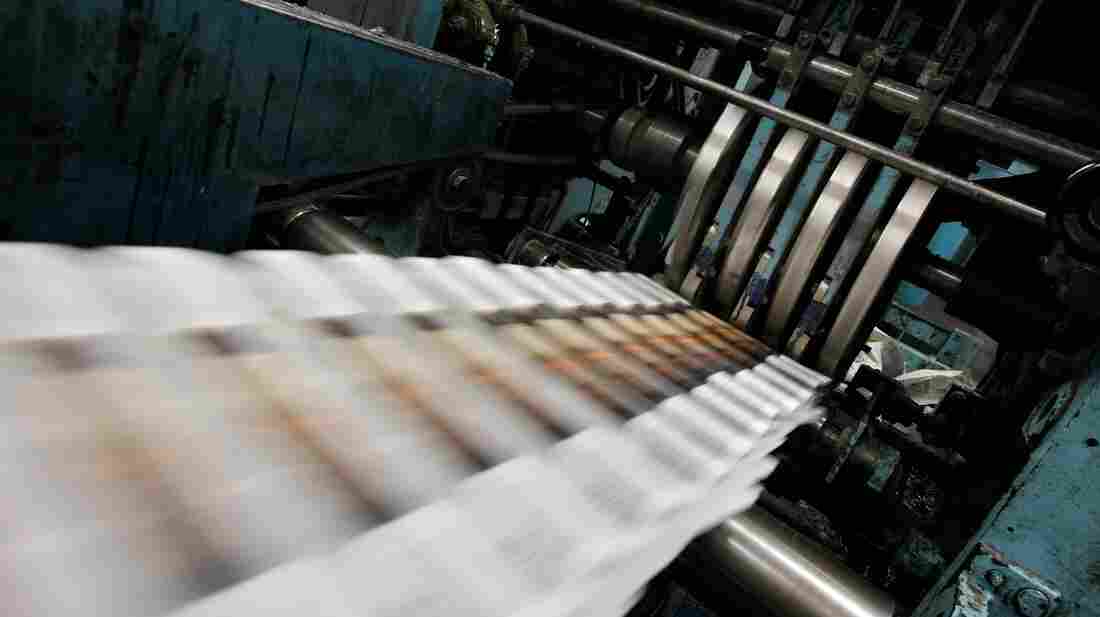 The power of newspaper endorsements has faded, but candidates still compete for them. Justin Sullivan/Getty Images hide caption 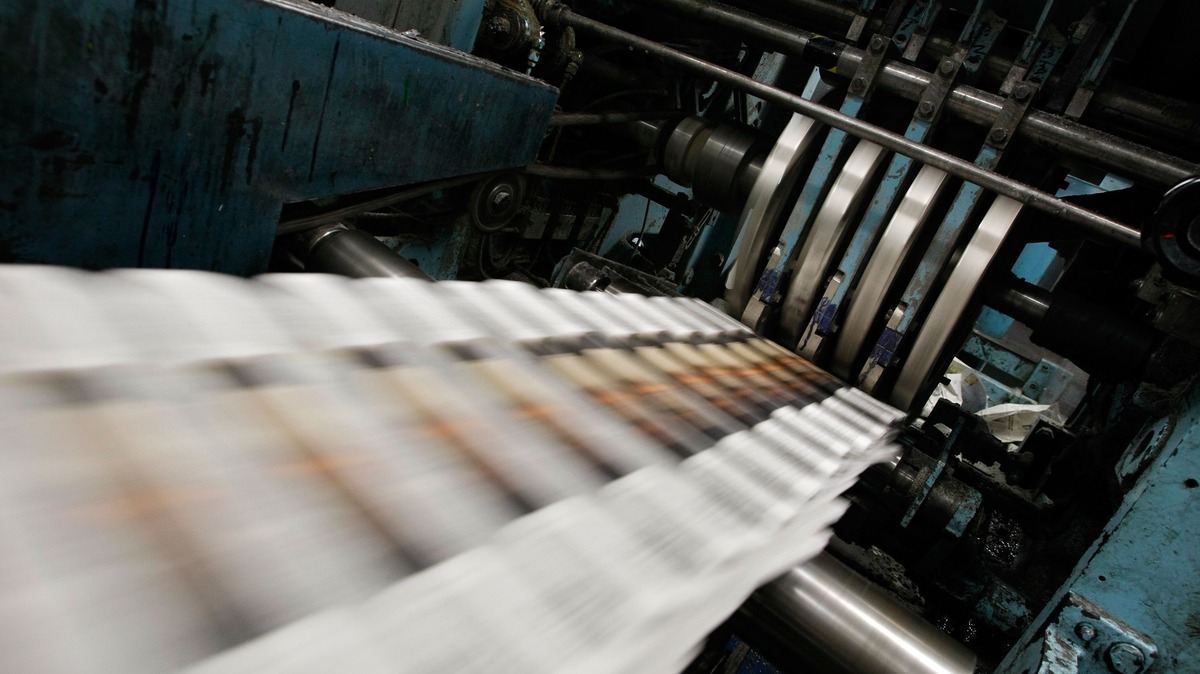 The power of newspaper endorsements has faded, but candidates still compete for them.

This weekend, a slew of newspapers in key swing states including Ohio are expected to release their endorsements for the presidency and other elected positions.

Such external validation is highly prized by candidates, but it's no longer entirely clear why.

The Columbus Dispatch gave a strong endorsement of GOP presidential nominee Mitt Romney last week, saying President Obama had failed: "Romney brings a wealth of executive experience in the private sector and the public sector that dwarfs that of Obama."

The Dispatch is the dominant paper in central Ohio, a swing region in one of the most vital swing states for this presidential field.

Yet even those voters who read the paper say they could have guessed who won its endorsement blindfolded.

"The Dispatch is traditionally a very conservative newspaper," said Matthew Burton, a 41-year-old stay-at-home father and Obama fan who lives just outside Columbus with his family. "There's the saying they've always endorsed every Republican since Woodrow Wilson. I'd be more surprised if they endorsed a national Democrat."

In interviews, a dozen voters suggested they put little to no stock in the editorials, even when they read the papers, and even when they fervently agree with those endorsements.

"Honestly, it doesn't influence me at all. There's definitely an underlying mistrust in the media from my perspective," said restaurant manager Mark Piscionari, a Romney supporter who said he preferred "doing my own research and doing my own homework."

"The endorsement really has no impact on my thought — or who I will vote for," said computer consultant Chris Malloy, who said he remained unsure of how he will vote. "My opinion is as valid as the editor of the newspaper, and it's my vote, so I will decide for myself."

"I think the people should be the ones to make the decisions — as opposed to these newspapers," said Himie-Budu Shannon, a deacon at an Episcopalian church. He said he will drive a bus from his church to voting stations on Election Day, a tacit move to get out the vote for his preferred candidate, Obama.

He said it did not influence him for a moment that his hometown Cleveland Plain Dealer strongly supported Obama for a second term. Asked if he remembered when he last relied on newspapers for guidance, Shannon responded: "As a child. Not since I became mature."

It's not that these Ohioans — and others like them — are not plugged in. They said they follow politics closely through the Drudge Report, NPR, cable news, PBS NewsHour to the Economist and the Guardian. All cited online aggregators such as Google News and Yahoo News.

That's reflective of newspapers' status in many markets: fading print monopolies struggling with sharply reduced paid circulation compared with a decade ago.

Newspapers in some smaller cities dotted across the country still bear names that betray (or honor, take your pick) their partisan roots, such as Foster's Daily Democrat in New Hampshire and the Waterbury Republican-American in Connecticut.

The move toward objectivity as a journalistic aim in reporting mirrored the decline of vibrant multi-newspaper towns, as surviving newspapers wanted to capture readers, not alienate them.

Some major papers, including the Atlanta Journal-Constitution, the St. Paul Pioneer Press and the Milwaukee Journal Sentinel, no longer make presidential endorsements. USA Today never did. And yet campaigns fixate over which candidate has won more, as the Washington Post recently wrote.

On Wednesday, Obama yielded to criticism from the Des Moines Register, the largest paper in the swing state of Iowa, and allowed publication of the full text of his off-the-record interview with the newspaper's executives.

David Holthaus. the new editorial page editor of the Cincinnati Enquirer, set modest goals for the paper's endorsement. He said it's a civic duty to give readers the benefits of the paper's research. The Enquirer is set to announce its choice this weekend.

"What we would like to see is our voice added to the voices across the country," Holthaus said, "and, in that way, present what's important for our community and our readers and have a way to speak directly to the campaigns."

"People who pay any attention to presidential politics have all this information about it," said Beck, who has tracked elections for more than 40 years. "They've seen the candidates in the debates. They have seen ... countless ads on television — so many that they are probably tuning them out as well. The newspaper endorsements are, I suspect, minor elements, if at all."

Some polling from Pew Research Center and others offers some support for that conclusion.

One veteran of four Republican presidential campaigns, Dan Schnur, cited two factors: a shift in political strategy and a rise in polarization reflected both in the tone of new media outlets, such as Fox News and the Huffington Post, and the outlook of voters themselves.

"The primary goal of a presidential campaign in the 21st century is no longer to persuade a dwindling number of undecided voters — but rather to find a way to inspire and excite and motivate your strongest supporters," said Schnur, the director of the Unruh Institute of Politics at the University of Southern California. "A newspaper endorsement is much more effective at persuading someone who hasn't made up their minds."

And yet — for all that — Schnur, who was the communications director for Republican John McCain's presidential bid in 2000, disagreed with what has become the new conventional wisdom outside political circles.

(Dispatch editorial page editor Glenn Sheller declined to be interviewed for this story, writing in an email that he did not trust NPR to treat Republicans or conservatives fairly.)

Schnur said that Republicans could ensure that people far beyond the Dispatch's readership would learn of its endorsement, by incorporating it into TV advertisements, social media updates, radio commercials and direct mailings to convey momentum toward the White House and rally the faithful.

So in this case, Schnur said, limited to a vital battleground region, Buckeye newspaper editorialists might well help stimulate a few more Romney voters to hustle to the polls, and help pick a president.