Accessibility links
Championing Life And Liberty For Animals If attorney Steven Wise gets his way, next year could be a game changer for animal rights in America. The director of the Nonhuman Rights Project plans to file a series of lawsuits in hopes that a court will finally recognize that a nonhuman plaintiff can be a legal "person" in the eyes of the law. 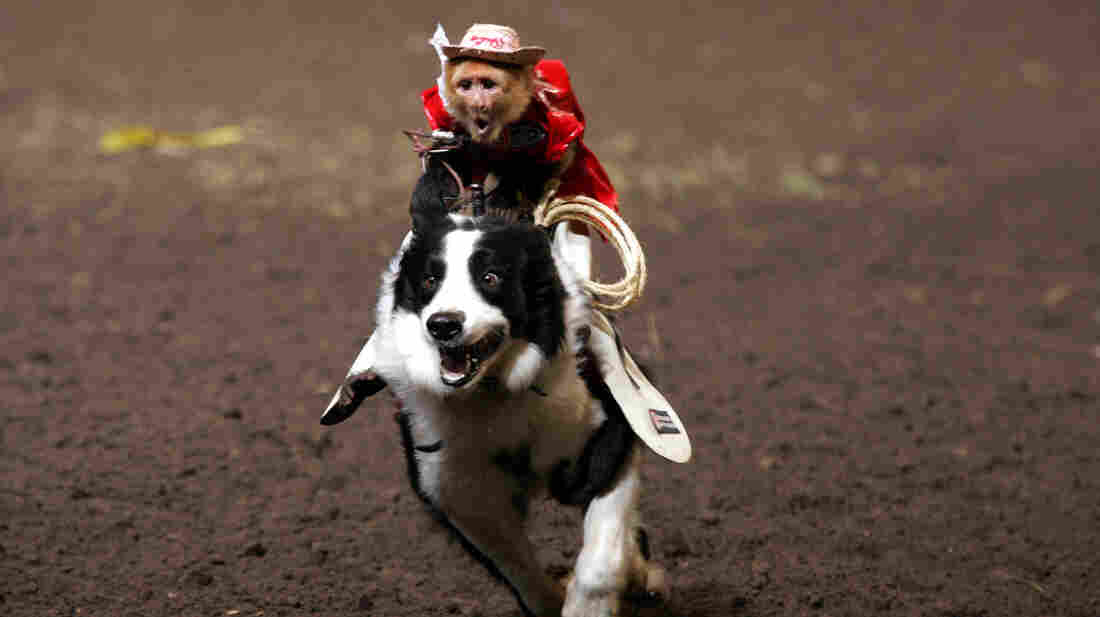 Before Sam, a white-throated capuchin monkey, threw out the first pitch at a minor league baseball game in Frederick, Md., on a midsummer Friday night, and before Sam and other monkeys — dressed as cowboys and riding shaggy dogs — rounded up longhorn sheep on the baseball diamond as part of Cowboy Monkey Rodeo promotion night, angry animal rights protesters gathered outside the front gate.

The Future Of Nonhuman Rights, Part 1

In 2013, the Pennsylvania-based Nonhuman Rights Project, led by attorney Steven Wise, plans to file a series of lawsuits in hopes that one high court in one American state will finally recognize that a nonhuman plaintiff can be a legal "person" in the eyes of the law.

If Wise and his group are successful, they will break new ground by securing humanlike rights for nonhumans. The result could open all kinds of possibilities for the rights of other nonhuman entities.

Advocates for plant rights and robot rights are already planning for the future. If they eventually succeed, it could bring sweeping changes to the way we live. This three-part series on the Future of Nonhuman Rights explores the people and ideas that may bring radical change to legal systems — and societies — around the world.

The handful of activists at the ballpark of the Class A Frederick Keys waved poster boards reading "No More Monkey Rodeos" and "Inhumane & Demeaning Spectacle." Among the protesters was Kelly Myers, a professional pet sitter from Frederick, who helped organize the rally. Notice of the protest was posted on the website of People for the Ethical Treatment of Animals.

In a post-protest interview, Myers expresses her concerns. The capuchins, she says, "belong in the wild. These sensitive, intelligent monkeys are meant to climb trees and forage for food all day. Being cramped up in a traveling road show and eating Pop-Tarts is not in their best interest."

Tim Lepard, the man who feeds Pop-Tarts to the monkeys, tends to disagree. A rodeo entertainer from Mississippi, Lepard is the owner and creator of the Monkey Rodeo. For years he has taken his animal act all over the country. He rebuts the idea that his stunts are inhumane or demeaning to the animals. He says he takes in fragile monkeys — who probably would not survive in the wild — to "give them a better life."

On this night, the star of the show was Sam, a 19-year-old primate who has been riding in Lepard's show for 14 years. Lepard says he treats Sam humanely.

"I don't tie them on the dogs," Lepard says. "I don't make them ride." He says his animals' living conditions are inspected several times a year by the Agriculture Department.

On the other side of the fence from Lepard — literally and figuratively — is Alan Kellerman, a high school teacher from suburban Washington and one of the placard-waving protesters. According to Kellerman, "Animals need to be afforded the rights to live their lives free of confinement, abuse, torture, murder and all forms of exploitation from humans."

Animals, he says, paraphrasing a PETA mantra, "are not ours to eat, wear or experiment on."

And that, in a nugget, is why some humans are vocal supporters of the rights of some nonhumans — in this case, animals.

When An Animal Is A Person

If Steven Wise gets his way, next year could be a game changer for animal rights in America.

Wise is the director of the Nonhuman Rights Project, an organization of human beings working toward gaining legal rights for other species. Wise says that he and 70 volunteers have logged 30,000 hours over the past four years to prepare the initial test cases to be filed in 2013.

The group is looking for clear-cut cases, sympathetic judges and amenable jurisdictions. And they are crossing their fingers that one high court in one American state will finally recognize, as Wise puts it, that "a nonhuman animal plaintiff is a common-law legal person." With the attending rights.

For Wise — and many animal rights activists — that would be a landmark victory.

"Once a court recognizes that a nonhuman animal has the capacity to possess a legal right," Wise says, "its determination of whether she actually has the rights she claims will appropriately shift from the current irrational, biased, hyperformalistic and overly simplistic question 'What species is the plaintiff?' to the rational, nuanced, value-laden principles- and policy-laden question: 'What qualities does the plaintiff possess that are relevant to the legal right she claims?' "

In the past 30 years, there have been some key moments in the push for animal rights. Here are a few:

1975: The publication of Animal Liberation by philosopher Peter Singer. In his book, Singer introduces the idea that speciesism — i.e., humans are superior to other species — is a type of oppression.

1979: The launching of the Animal Legal Defense Fund. Founded by attorneys, the group works to protect animals and promote the field of animal law.

1980: The founding of People for the Ethical Treatment of Animals. Today, with more than 3 million members and supporters, PETA bills itself as the largest animal rights organization on the planet.

1983: The publication of The Case for Animal Rights, a moral argument, by Tom Regan.

1985: In Defense of Animals stages an organized, nonviolent protest at the University of California, Davis Primate Center. A number of activists are arrested and put in jail for civil disobedience.

1995: Compassion Over Killing, a nonprofit animal advocacy organization, is founded.

2012: After 30 years — and amid protests mounted by various activist groups — the use of chimpanzees as research subjects is phased out at Rockville, Md.- based Bioqual labs.

In an address delivered in April 2012, at Pace University law school, Wise likened animals today to human slaves in 18th century England — invisible to the legal system, beings without rights. He cited the ruling of the British judge, Lord Mansfield, in the 1772 Somerset case that opened the door for the abolition of human slavery in England.

Now Wise says he is looking for a modern-day Mansfield, a "substantive common-law judge" who might rule — under the general rubric of "dignity" — in favor of an animal's right to bodily liberty and bodily integrity. He feels that the breakthrough will come if one state high court declares that a nonhuman is a legal person — in the eyes of the law.

One reason for extending fundamental rights to humans, Wise says, is because they possess the dignity associated with autonomy. He calls the minimum autonomy sufficient for rights "practical autonomy." His tripartite definition of practical autonomy: 1) Is the being cognitively complicated enough to desire something? 2) Can she act intentionally to achieve her desires? 3) Does she have a sense of self enough to know if she has achieved these desires?

"Because it appears that many, perhaps most, mammals and birds have emotions, are conscious, and have selves," Wise writes in his 2002 book Drawing the Line: Science and the Case for Animal Rights, "the burden of proving at trial that an individual mammal or bird lacks practical autonomy should be shouldered by the one who wants to harm them."

Richard A. Epstein, a professor of law at New York University, doesn't agree with Wise. In a 2000 essay spurred by another Wise book, Rattling the Cage: Toward Legal Rights for Animals, Epstein — who has provided frequent counterpoint to Wise over the years — wrote: "No one can deny the enormous political waves created by animal rights activists ... But it is another thing to endorse the agenda of the animal rights movement."

Rules that prohibit and prevent "gratuitous cruelty to animals" should be broadly supported, Epstein says, because animals suffer regardless of their level of consciousness, and because animals — both domesticated and wild — are of "enormous value" to humans.

"It is, however, one thing to raise social conscience about the status of animals," Epstein wrote. "It is quite another to raise the status of animals to asserted parity with human beings. That move, if systematically implemented, would pose a mortal threat to human society that few human beings would, or should, accept. We have quite enough difficulty in persuading or coercing human beings to respect the rights of their fellow humans to live in peace with each other."

When it comes to using animals for testing, Epstein says today, "there are real questions of whether animal studies are needed for medicine, where the tendency is — rightly — to cut back but not to eliminate."

But when it comes to the proposed test cases in 2013, "I don't think that they will win," Epstein says. "The rights in question have to be limited to freedom from harm, which can be justified without rights on humanitarian grounds."

'The Rights Of All Creatures'

Getting to this crossroads has been a long journey for animal advocates. Some historians trace the timeline of animal rights activism back to antiquity. But in the past few decades, there has been an acceleration of the movement and an increasing number of notable milestones.

And yet we don't really need a list of monumental moments to see that the animal rights community's influence is everywhere.

Scores of celebrities from Pamela Anderson to Betty White speak out often for the rights of animals. Director Oliver Stone made a video recently for PETA decrying the killing of more than 10,000 live animals "in crude and cruel trauma-training exercises" by the American military and its contractors. When thoroughbreds died during the filming of HBO's Luck, animal rights advocates protested and the show was canceled.

More and more menus and entire restaurants are now tailored to vegetarians and vegans, purposefully or inadvertently protecting the welfare and rights of animals. Increasingly, grocery stores display offerings that promise to be cage-free, range-free, grass-fed and certified humane. The intensified scrutiny of the fur industry, the demise of horse slaughtering, and the end of live animal use in commercial and scientific testing all point to new levels of respect and protection for animals.

Myers, the pet sitter, says she already sees the world changing in favor of the animals.

"The locavore and green lifestyles are leading to more plant-based diets and more money being spent on humanely raised meat," she says. "I don't think animal rights will be won in my lifetime, but we're certainly on our way."