Accessibility links
Movie Reviews - 'Pusher' - A Crime Drama In Need Of A Push Pusher, Luis Prieto's remake of a 1996 Danish film, is a typical crime drama about a drug deal gone bad in almost every way. Joel Arnold believes the film's passive hero embodies the title literally but not metaphorically, getting pushed through his life of crime instead of forging his own path.

A Crime Drama In Need Of A Push

A Crime Drama In Need Of A Push 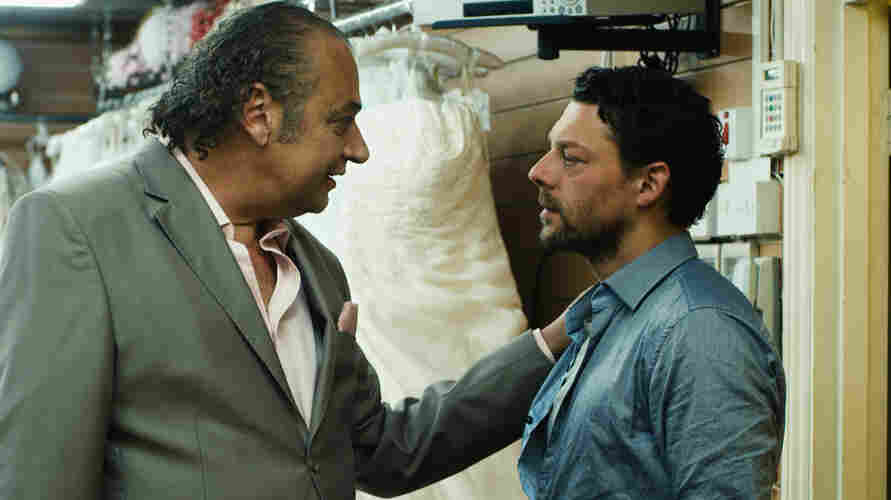 In Pusher, a drug dealer's (Richard Coyle) life is on the line when a botched deal lands him in the clutches of a ruthless crime lord (Zlatko Buric). Radius-TWC hide caption

Cinematic crooks could learn a thing or two about their profession from the movies. The last score, the double cross, the vengeful boss who wants his money back: Audiences have seen enough of these well-worn tropes that it's reasonable to expect a modern character would be casually familiar with them. In other words, even dopey dad and high school teacher Walter White in Breaking Bad and the wannabe gangster teenagers in Gomorrah have seen Scarface, no matter that they didn't take the violent story of a drug lord's rise and fall as a lesson in what not to do. While directly referencing a genre antecedent may be unnecessary in every new entry, prudent practice for filmmakers working in a dependable genre like crime would be to acknowledge past influences while tweaking the formula to tell an old story in a new way.

No one got that memo on Pusher, a heavy and moralistic throwback of a crime thriller that subtly subverts, albeit through a take on the genre that's more than a decade old. A tame remake of Nicholas Winding Refn's influential 1996 Danish-language debut, Pusher chronicles a week in the life of Frank (Richard Coyle), a midlevel London drug dealer fully at home in the exhausting habit of his illicit lifestyle. Frank does coke, goes clubbing with his reckless sidekick Tony (Bronson Webb), drinks, does more coke, dances with his stripper girlfriend Flo (Agyness Deyn), passes out, makes a few exchanges during the day, and repeats.

The endless, coke-fueled nights are evident in Frank's wiry form and rundown, almost gaunt face, but he's the only one who seems not to notice. Although Frank exudes a stoic toughness, he also demonstrates himself to be even-tempered and smart — enough that he should know he can't keep this up forever without facing grave consequences. Something is coming, whether Frank is ready for it or not.

Small cracks are already forming in Frank's connection to reality. The morning after a wild night at a nightclub, Frank picks up a call from a buyer he can't remember meeting, but the deal sounds good, and he meets his supplier Milo (Zlatko Buric), a paternal, baklava-serving sort, who tells Frank every other sentence that he likes him, no matter the several thousand Frank already owes.

Frank persuades Milo and gets the "gear," only to end up ditching it in a lake when the cops bust the transaction. When the police eventually release Frank and he returns to Milo with neither drugs nor money, the boss's demeanor changes, and gone is his transparently insincere affection, replaced by a simple desire for his $55,000. 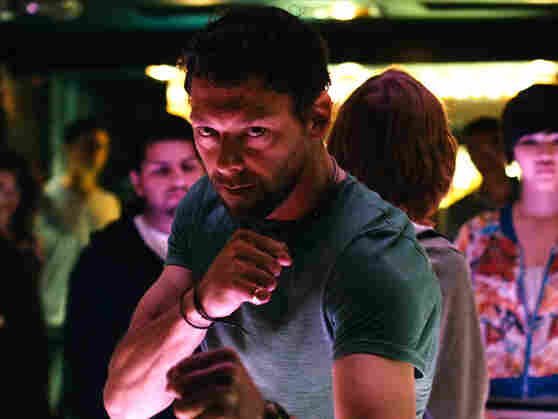 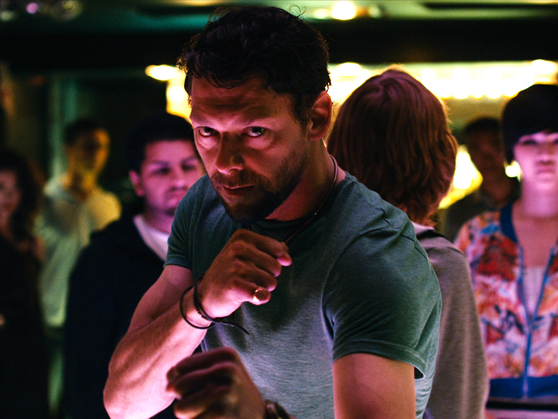 Richard Coyle's performance elicits sympathy for a drug dealer, despite his overwhelming passivity.

It's a reversal that anyone but Frank can see coming, but here Pusher diverges from the expectations set by most crime films with this plot development, even those as sophisticated as 2004's London-set Layer Cake: Frank doesn't fight back. Rather than turning against his increasingly threatening boss, Frank obediently tries to get the money, threatening and doing violence to friends — even Tony —and people who owe him money before considering taking on his boss or running. Frank is intelligent but reveals himself to be unambitious and altogether too loyal and trusting. He's not the plucky hero fighting for his life, his family, or his girl; he's just an average dealer paying back an unexceptional supplier.

That unexpected choice makes for several palpably tense scenes, as Frank is pushed further to the breaking point. Seemingly of their own accord, strange images of animals fighting for survival appear on the TV in front of Frank, making the subtext of Frank's inner turmoil text. A long take following Frank's bloody encounter with a deadbeat pet shop owner illustrates his numbness and lack of options. These scenes work in service of a moralistic perspective, pegging Frank as a cog in a system of drug users, dealers and suppliers that will chew up anyone who's no longer of function to it. Frank has no identity unto himself — he could be any other dealer.

And yet Coyle's vulnerable performance as Frank undermines the film's goal. Coyle expresses the weight of his exhaustion and the incredible debt hanging over him with a closed-off physicality and haunted eyes that prevent him from becoming a flat character. He infuses Frank with the humanity necessary for an audience to invest in a character who chooses not to fight for his own survival. Consequently, the rushed and incoherent ending that Pusher forces on its protagonist doesn't line up with any of his previous actions. Even though it serves the film's metaphor, it denies Frank's agency. Pusher is some kind of tragedy, though not the one its filmmakers intended.