Accessibility links
Recognizing The Right Of Plants To Evolve Plants can sometimes exhibit human-like behavior — some respond to music, smell other plants or seem to shrink away when touched. In fact, some would argue that greenery is sensitive enough to deserve rights.

Recognizing The Right Of Plants To Evolve

Recognizing The Right Of Plants To Evolve 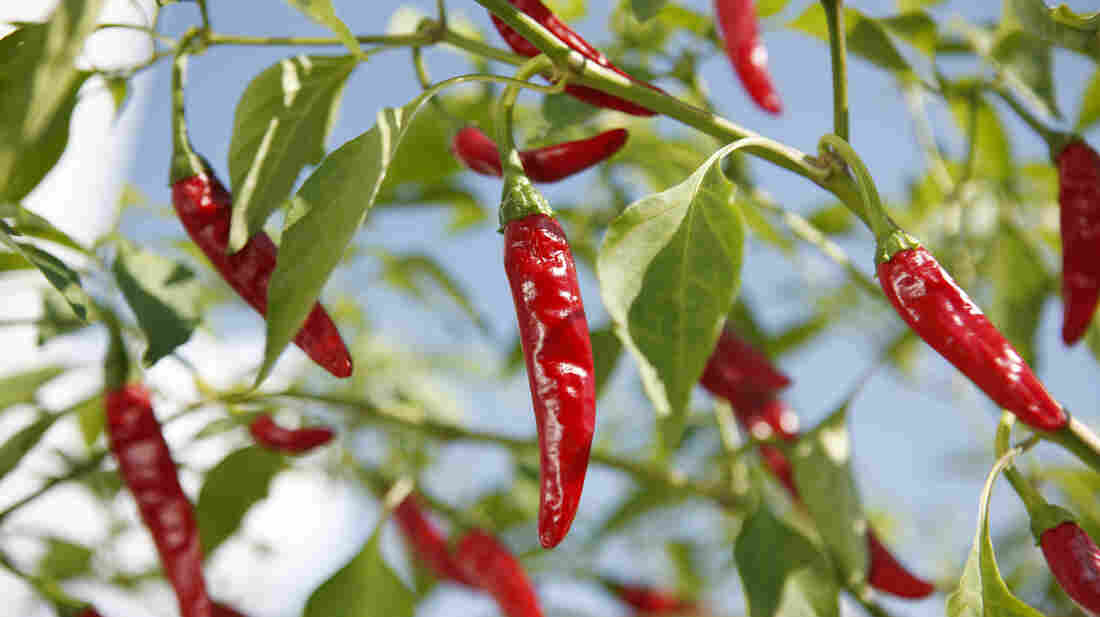 According to recent reports from a research team led by Australian biologist Monica Gagliano, some plants such as chili peppers may be able to "hear" other plants. iStockphoto.com hide caption

If proposals calling for rights for animals are on the table, why not rights for other living things? Plants, for instance.

The Future Of Nonhuman Rights, Part 2

In 2013, the Pennsylvania-based Nonhuman Rights Project, led by attorney Steven Wise, plans to file a series of lawsuits in hopes that one high court in one American state will finally recognize that a nonhuman plaintiff can be a legal "person" in the eyes of the law.

If Wise and his group are successful, they will break new ground by securing humanlike rights for nonhumans. The result could open all kinds of possibilities for the rights of other nonhuman entities.

Advocates for plant rights and robot rights are already planning for the future. If they eventually succeed, it could bring sweeping changes to the way we live. This three-part series on the Future of Nonhuman Rights explores the people and ideas that may bring radical change to legal systems — and societies — around the world.

After all, plants can sometimes exhibit humanlike behavior. And we're not just talking about the butterwort-flytrap hybrid in The Little Shop of Horrors. Some plants respond well to music. Some "smell" other plants. Still others seem to shrink away when touched.

Plants display remedial types of memory and possess "anoetic consciousness" — the ability of an organism to sense and to react to stimulation — writes Daniel Chamovitz in his 2012 book, What a Plant Knows: A Field Guide to the Senses.

And, according to recent reports from a research team led by Australian biologist Monica Gagliano, some plants (such as chili peppers) may be able to "hear" other plants (such as sweet fennel). "We know that plants recognize what is growing next to them," Gagliano says in the University of Western Australia's University News. "There is chemical communication between them. Plants can warn other plants of a predator by releasing a chemical, and the warned plants can release chemicals to make themselves unpalatable to the predator."

She says, "I think we might realize that plants are more sensitive than we think."

Sensitive enough to deserve rights? Some people think so.

Writing in The New York Times recently, Michael Marder, author of the forthcoming Plant-Thinking: A Philosophy of Vegetal Life, calls for "plant liberation." Plant stress, Marder points out, does not reach the same intensity, nor does it express itself in the same ways, as animal suffering. This fact, he adds, should be reflected in our practical ethics.

But, he continues, "the commendable desire to ameliorate the condition of animals, currently treated as though they were meat-generating machines, does not justify strategic argumentation in favor of the indiscriminate consumption of plants. The same logic ultimately submits to total instrumentalization the bodies of plants, animals and humans by setting them over and against an abstract and rational mind."

Therefore, he concludes, "the struggles for the emancipation of all instrumentalized living beings should be fought on a common front."

In a debate between Marder and Gary Francione — a professor at Rutgers University's law school — on the Columbia University Press website, Francione offers an opposing view to plant liberation and rights. "If plants are not sentient — if they have no subjective awareness — then they have no interests," Francione says. "That is, they cannot desire, or want, or prefer anything."

Therefore, Francione says, "I do believe that we have an obligation not to eat more plants than we need to live, but that is because I think that overeating is a form of violence to our own bodies. I also believe that we have an obligation to all sentient inhabitants of the planet not to use more non-sentient resources than we need. In both cases, we have obligations that concern plants but these obligations are not owed directly to plants."

Of Subjects And Lives

Branching Out: Digging Into Plant Rights

Here are some links to websites that examine the nature of nature:

Prince Charles on Talking to Plants

Do Plants Think? An interview with Daniel Chamovitz in Scientific American

Global Alliance for the Rights of Nature

And, he continues, "what happens to them makes a difference to the quality and duration of their life."

By Regan's compass, many, many nonhuman animals are subjects of a life and therefore have basic moral rights, including the rights to life, liberty and bodily integrity.

Plants, however, "are forms of life without a subject. That is to say, while they live in the world, they are not aware of the world, nor are they aware of what happens to them," Regan says.

Before recognizing the rights of any forms of life without a subject — such as plants — Regan says, "we need to be given a sound argument."

And, he says, "at least up to this point in my life, I have not encountered one."

The Right To Evolve

The Community Environmental Legal Defense Fund argues that greenery does have interests — and rights. The Pennsylvania-based nonprofit works with communities around the world to "craft and adopt new laws that change the status of natural communities and ecosystems from being regarded as property under the law to being recognized as rights-bearing entities."

Establishing a legal system in which natural communities and ecosystems have an inalienable right to exist and flourish, says Mari Margil of CELDF, "places the highest societal value on those natural systems and communities."

In the past few years there has been a flurry of international interest in a plant rights movement. The New York Times reported in 2008 that Ecuador became the first country to provide constitutional rights to plants, granting nature "the right to the maintenance and regeneration of its vital cycles, structure, functions and evolutionary processes." That same year, a Swiss ethics panel advocated protecting plants' "reproductive ability."

Speaking recently in Hawaii, the Dalai Lama said that every living thing, including a tree or a plant, has the right to survive.

It Isn't Easy Being Green

From one angle, the contemporary plant rights movement is an extension of our ever-increasing awareness of the complexity of plant life. Writing in his popular 1990 novel Jurassic Park, Michael Crichton drew a compelling portrait of nature.

"In the earth's history," Crichton observed, "plants had evolved as competitively as animals, and in some ways more fiercely ... People who imagined that life on earth consisted of animals moving against a green background seriously misunderstood what they were seeing. That green background was busily alive. Plants grew, moved, twisted, and turned, fighting for the sun; and they interacted continuously with animals — discouraging some with bark and thorns; poisoning others; and feeding still others to advance their own reproduction, to spread their pollen and seeds. It was a complex, dynamic process ..."

In Crichton's latest novel, Micro — co-authored with Richard Preston and published after Crichton's death — the nature of nature continues to be explored.

Plant rights, however, is a stickier thicket. And if sovereignty for soybeans is not imminent, our awareness of our relationship to plants — and how we treat them — is moving to the front burner. "When it comes to beautiful, rare or keystone plants in an ecosystem," Preston says, "they don't have rights as individual organisms, but I think the ecosystem as a whole has an inherent right to exist."

And, he adds, "I don't think humans have an inherent right to destroy any ecosystem."