Accessibility links
What's A Lake Doing In The Middle Of The Desert? In the United Arab Emirates, a new ecology is emerging at a lake formed by desalinated water that's been pumped in from the Persian Gulf. 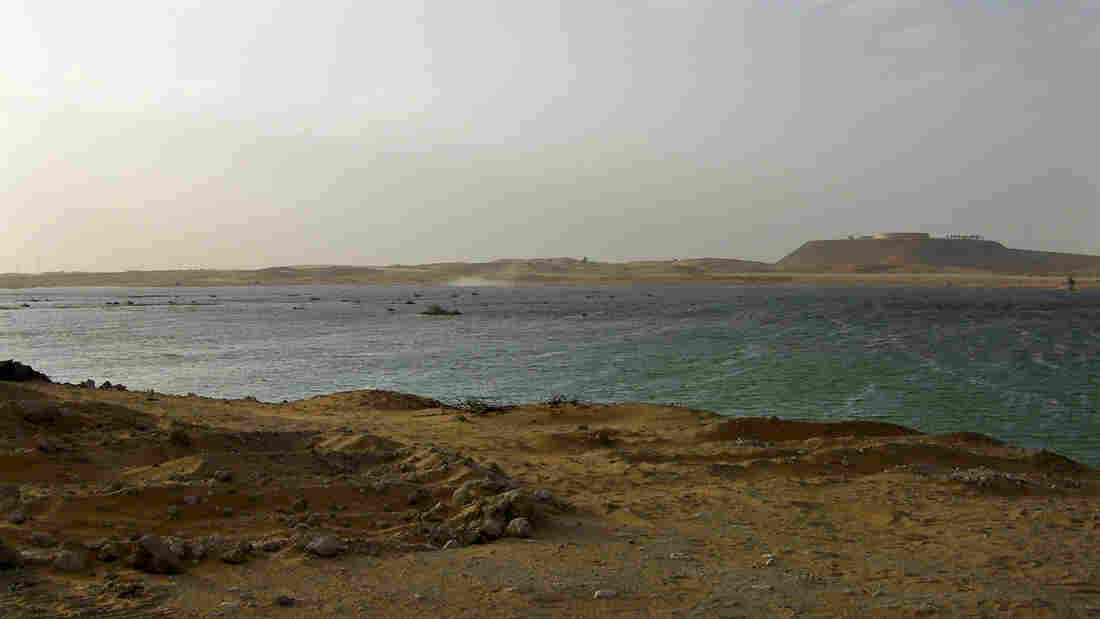 After desalinated water was pumped inland from the Persian Gulf, an oasis has appeared in the middle of the desert in the United Arab Emirates. Ari Daniel Shapiro for NPR hide caption 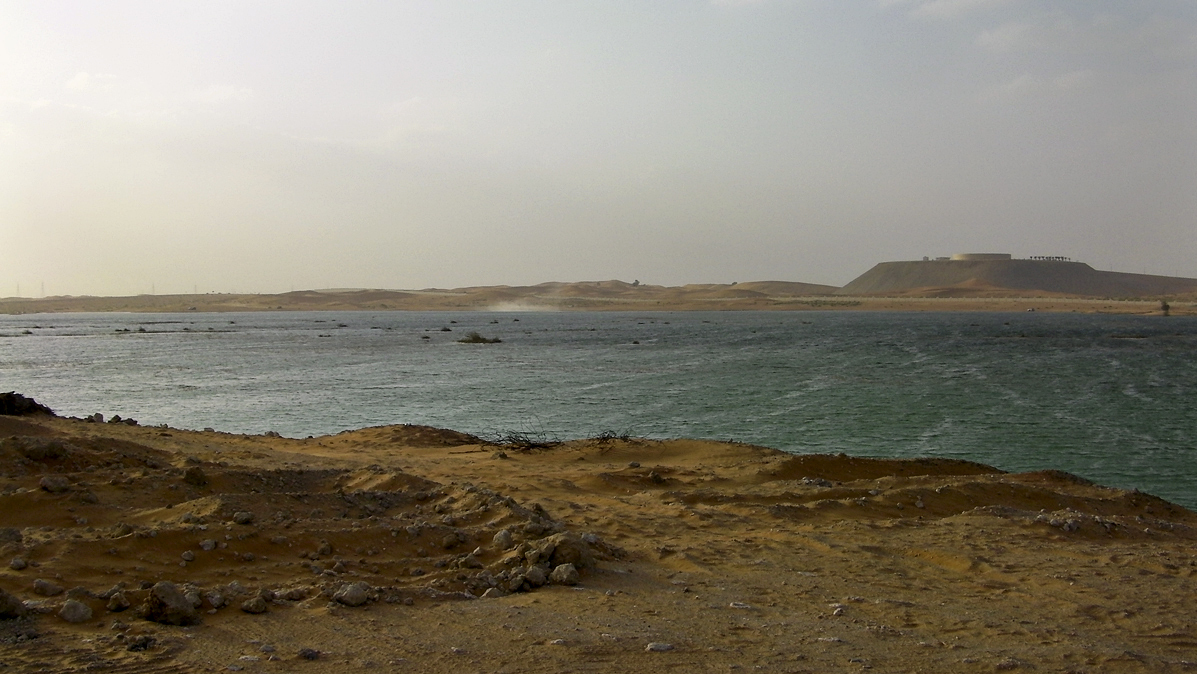 After desalinated water was pumped inland from the Persian Gulf, an oasis has appeared in the middle of the desert in the United Arab Emirates.

One place you don't expect to see waves lapping against the shore is in the middle of a desert. But that's exactly what's happening deep inside the United Arab Emirates, where a recently formed lake is nestled into the sand dunes, and a new ecosystem is emerging.

Drive through the desert in the United Arab Emirates, and all you see mile after mile are red, rolling dunes. Maybe some occasional trees or shrubs, but otherwise a dry, red sandscape.

And then, suddenly, a bright blue spot comes into view. It must be a mirage, you think. But it's not. 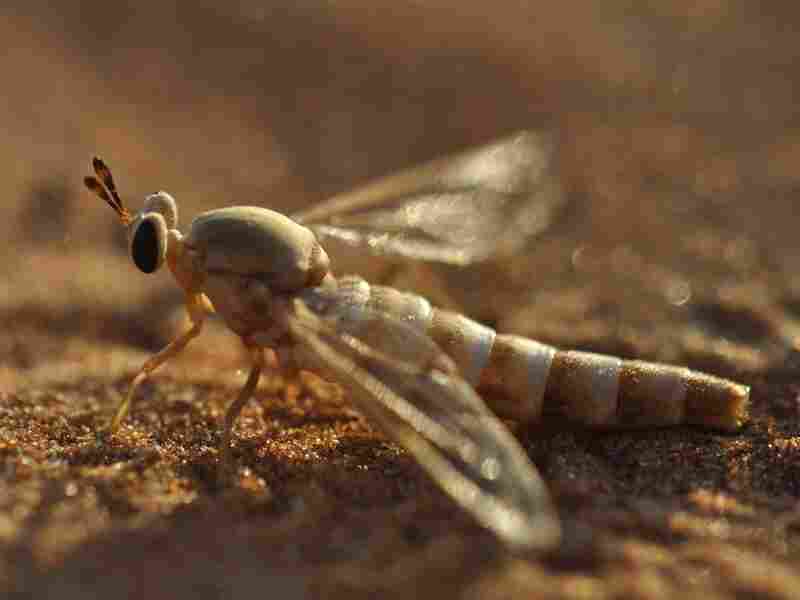 A midas fly touches down on the sands of the desert in the United Arab Emirates. A lake in the area has brought new forms of wildlife, but some scientists are concerned it could harm the habitat of the midas fly. Brigitte Howarth hide caption 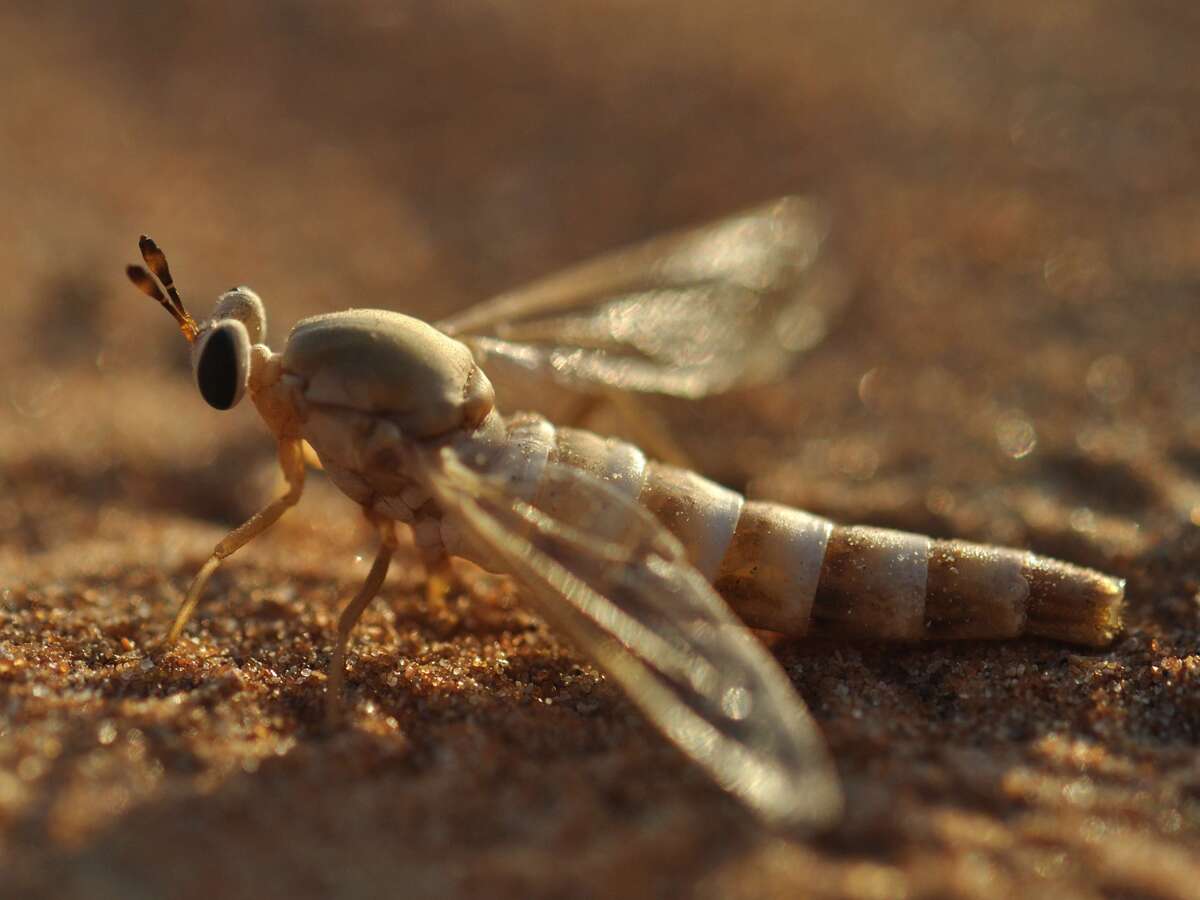 A midas fly touches down on the sands of the desert in the United Arab Emirates. A lake in the area has brought new forms of wildlife, but some scientists are concerned it could harm the habitat of the midas fly.

The water's edge comes right up to the sand, the wet and the dry, kissing. The wind whips across the blue water's surface, pushing it into a light chop. And wispy reeds in the center of the lake flutter in the breeze.

Dave Clark, a hydrologist with the U.S. Geological Survey working in the United Arab Emirates, says this lake emerged from the sand a few years ago.

"You see local families out here and they're all just enthralled," Clark says. "It's water in the desert, so everybody's pleased. But it's definitely water that's had a human touch to it. People have had their hand in this water, maybe literally."

Here's how this lake got here: A desalination plant right on the coast pulls in saltwater from the Persian Gulf and makes that water drinkable and usable. The water is then pumped 150 miles inland to the city of Al Ain. The residents there drink it up, bathe with it and then flush it down their drains.

"It goes to the sewage treatment plant, and they treat it, and they bring it back into town. And they water the parks and the gardens and things like that, and that percolates down into the groundwater," Clark says.

And then it ends up in the desert, a short distance from Al Ain, by percolating back up from the ground. This water's clean. But still, it comes as a shock to some in the desert.

"Just because the sand dunes look on the surface to be fairly barren doesn't mean that they are. They are full of life," says Brigitte Howarth, an ecologist at Zayed University in Dubai.

Howarth studies insects that evolved in the harsh, arid conditions and worries that some of them aren't faring so well in this part of the desert that's suddenly underwater. Like the midas fly, which she spotted for the first time in October 2010.

"All of a sudden, this fly started to dip its abdomen into the sand. And so, it's about an inch deep in the sand, and it's egg-laying," Howarth says.

The midas flies rely on dry, loose sand to lay their eggs. But the lake is flooding more and more of the sand. Howarth hadn't yet spotted any midas flies this year, and she's concerned about the lake's effect on their habitat.

"For them, the encroachment is in fact a death sentence," Howarth says.

The wind blows the sand off the top layer of the dunes to create a kind of granular fog in the air. But underneath that shifting surface, the world is more stable. So if the dunes are dry enough and warm enough to allow midas fly eggs to hatch, Howarth knows that a raft of other organisms — like insects, plants and reptiles — will probably be in good shape too.

Howarth trains her eye on the lake. It has risen 35 feet in the last year alone. She's concerned that this new source of water, and the development pressures of a growing human population, don't bode well for the dunes.

"With every species that we lose, it's like rolling the dice. The whole ecosystem could crash down," Howarth says.

But Clark, with the U.S. Geological Survey, says he's not so worried about the desert ecosystem. He says the lake is tiny compared to the vast amount of desert in this part of the world.

"If I look through the binoculars, there's, like, seven different kinds of herons. There's greater cormorants. There's ferruginous ducks, which are another very rare worldwide species," Clark says. "There's about 15 of them out here."

This year, three types of birds bred at this lake. They've never been able to breed before in the United Arab Emirates. But this lake, and the others like it, have changed all that.

"Every year, we find two or three or four or five birds that have never been seen before in the UAE. So it's one of the few places in the world that the number of birds is actually increasing, instead of decreasing," Clark says.

There are fish appearing in these lakes as well. Fish eggs cling to the feet and legs of the herons. So as the birds shuttle between old and new lakes, the eggs fall off and hatch. That's how you get fish in a desert.

Out here, one ecosystem is leaking into another, and new lakes like this one are starting to appear in other parts of the desert.

As new webs of creatures replace the ones that came before them, it might happen so quickly that we'll never know what was here in the first place.

Ari Daniel Shapiro produces the podcast One Species at a Time for the Encyclopedia of Life with Atlantic Public Media in Woods Hole, Mass.