Accessibility links
U.S. Soccer Star Abby Wambach Plays Not My Job Since Wambach sounds kind of like wombat, we've invited Abby to answer three questions about the cuddly marsupials. Our game will take about four minutes ... and will probably have more scoring than 90 minutes of soccer. 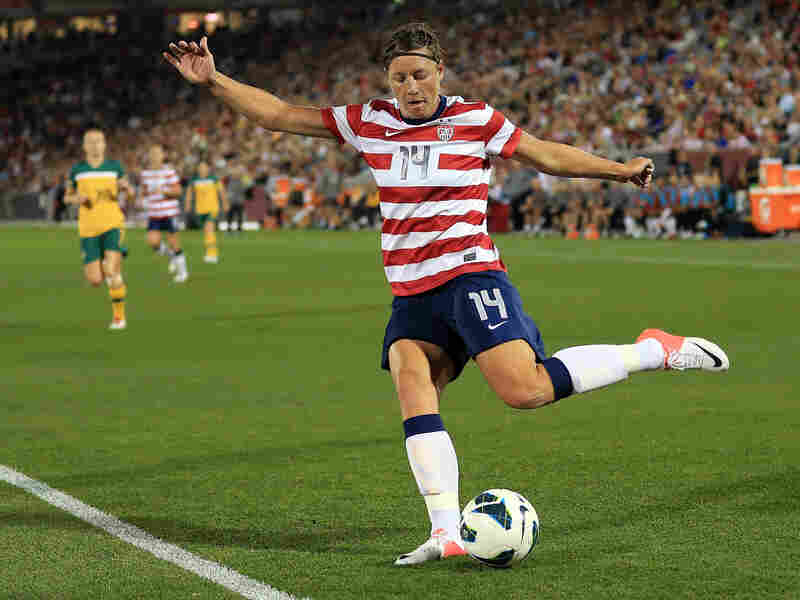 Since Wambach sounds kind of like wombat, we figure Abby should know everything about the cuddly marsupials. We've invited her to play a game called "You're good at soccer, but can you carry your young in a pouch?" Our quiz will take about four minutes ... and will probably have more scoring than 90 minutes of soccer.

Wambach is a multiple gold medalist, holds the best goals-per-game ratio in U.S. soccer history and has just been nominated for FIFA Women's World Player of the Year.

And now the game where we invite on big names and ask them little questions. U.S. soccer player Abby Wambach is a multiple gold medalist, she holds the best goals per game ratio in U.S. soccer history, and she's just been nominated for FIFA Women's World Player of the Year.

CAREY: You know, I don't know if you know this about me, but I'm a huge soccer fan and Peter Sagal is not.

CAREY: So I'm really excited to say this, Abby Wambach Welcome to WAIT WAIT...DON'T TELL ME!

CAREY: Welcome to the show. So listen, as I mentioned, I'm a huge soccer fan. My number one favorite sport and Peter Sagal isn't, so I guess my first question is what's wrong with him and everyone else who isn't a soccer fan?

WAMBACH: That's a great question. Soccer is one of those sports, it obviously is a world game, it's the most popular sport played around the world, but I like it because there really isn't a set play. You go out and it's a bunch of people trying to get on the same page because you've got to know your teammates, you got to know your strengths and your weaknesses and ultimately that one goal.

I know it's not the American style. A few goals is the way soccer is meant to be played.

WAMBACH: Cerebral game and I really appreciate that part of it.

CAREY: I think they should give seven points for every goal so everybody else could understand it.

WAMBACH: I think so. I think that they're going to ban me from crossing the line, whether it's the Olympics in 2016 or the 2014 Men's World Cup.

WAMBACH: It was pretty special, you know, I mean not to mention it's against Brazil. You know, they have a tendency to sometimes, you know, go down and writhe in pain and waste time, the gamesmanship stuff. And it kind of came back to bite them because...

CAREY: Punching people in the eye.

CAREY: Oh, no, I'm sorry, that was Colombia.

WAMBACH: Yeah, that was Colombia.

CAREY: I get my countries mixed up. Now, what do you think you'd be doing if you weren't a soccer player? Because you've been playing since you were 4 years old. I understand you had to move to a boy's team after you scored 27 goals in three games when you were a kid.

WAMBACH: Yeah. My parents, they're the kind of people that didn't want me to get a big head, so they just kept challenging me and challenging me. But what I would do if I weren't playing soccer, truthfully I have no freaking clue. I mean I love what I do.

WAMBACH: I'm going to play until I possibly can't play anymore and at that point, I'll decide.

CAREY: What was your major when you were in college?

TOM BODETT: Abby, this is Tom. You know, as the father of boys who play sports and as a hockey dad who's up to my eyeballs in the sport, I have to say what I appreciate about soccer is the lack of equipment.

BODETT: This hockey bag that my 7 year old carries around, you could put two of him in, in the bag. So have you played since you were just a little mite like that?

WAMBACH: Yeah, I have. I have played pretty young. You know, I played all sports growing up, but that's also the best part about playing soccer is all you need is a ball. You know, you can get two trees in your backyard and there you go, you've got a goal.

CAREY: Listen, like speaking of hockey and equipment and all this stuff, there's no - you're not wearing anything but your uniform when you're playing. I have to ask you, you've had your share of injuries. You want to run down a few of your injury highlights?

WAMBACH: Yeah, I've had a few interesting moments. Broke my leg, tib-fib, have a rod in my leg now. Got punched in the face. I've had multiple stitches put in my head from getting headed by other opponents.

BRIAN BABYLON: What is this, fight club?

CAREY: She's like the toughest soccer player I've ever seen. She literally, like when she went up for a header once and collided with this other player from Brazil, and when she landed, her head was bleeding so much, they came on the field during the game with a stapler and stapled her skin together, which honestly I can't see Landon Donovan doing that.

CAREY: Not the face, you know what I mean?

WAMBACH: Yeah, I guess not.

CAREY: Yeah, what was that like, getting your face stapled together in the middle of a game? What were you thinking?

WAMBACH: It was the end of the game and we needed to win that game to qualify for the World Cup. It was actually, in fact, it was against Mexico and not Brazil. It was the last few minutes. I think it was almost in extra time. So I was just like, let's go, like staple it up. You know, and your adrenalin is kicking so much that you don't really feel it.

BABYLON: Staple it up.

CAREY: Listen, you know a lot of people, if they don't know soccer, they think soccer players are notorious for flopping. So you realize you don't have to go that far, right?

WAMBACH: I do. And I think that the fact that women and myself included, you know if we're getting staples on the field, we're trying to make Americans know that a lot of the South American countries, they're pretty much more known for flopping than the Americans. We like to stand strong and show the American people that soccer is a physical contact sport but we're not floppers.

CAREY: Some of your teammates have made fun of you for being a bad dancer. Now how can you be so good with your feet and be a bad dancer?

WAMBACH: I call it I'm the best worst dancer on the team. You know, I still win that award. I don't know. I never was given the gift of dance, and honestly, I'm more of a big target forward, so I would actually even question my ability with the ball at my feet and my technical ability as well.

CAREY: Yeah, you score a lot of goals with your head, yeah, you're right.

WAMBACH: I do. I'm pretty much brain dead at this point.

CAREY: Now, I'm also a big fan of Hope Solo. If you were to arm-wrestle Hope Solo, who would win?

WAMBACH: I think she would win. She's got guns, you know what I'm saying?

CAREY: So do you.

WAMBACH: Well, I've got the weight. I've got her on the weight category. She uses her hands and is pretty fit.

BODETT: What if you each had a stapler?

WAMBACH: Well, Hope had shoulder surgery a couple of years ago, and so she's got a few pins in her shoulder.

WAMBACH: I think we've got equally as many - I mean and she actually got hung up on a goalpost once and her whole forearm is totally scarred because she had to have hundreds of stitches to put her arm back together. It was actually pretty nasty.

BABYLON: What are you young ladies doing?

CAREY: You hear that everybody who has their little girl playing soccer?

CAREY: This is what happens to you.

BODETT: I tell you that equipment bag of my son's for hockey is looking pretty good all of the sudden.

CAREY: Yeah. Now, are you OK being around after a loss? Are you really mad? Are you good after - like really happy after a win, really sad after a loss, what's it like?

WAMBACH: Yeah, well after a win, most of us are probably just - we expect to win because we've been winning for so many years. And after a loss, it's very, very quiet on the team bus ride back to the hotel and all of us are trying to think through what happened and how do we fix it, how do we not get to this point again. And yeah, you don't want to get really close to me because I'm steaming, I'm upset.

CARL KASELL: You're good at soccer, but can you carry your young in a pouch?

CAREY: I'm almost glad you're not here to punch me.

CAREY: Your name is Abby Wambach, which sounds like wombat, which of course means you'll know everything about them. We're going to ask you three questions about the cuddly marsupials, the wombats.

CAREY: Get two right and you'll win our prize for one of our listeners, Carl's voice on their voicemail. Are you ready to go?

CAREY: Carl, who is Abby Wambach playing for?

KASELL: Abby is playing or Lakshmi Shamagan of Fitchburg, Massachusetts.

CAREY: OK, Abby, here's your first question about wombats. Despite their cute cuddly appearance, wombats have inspired some creepy tributes, including which of these? A: An Iraqi little league team called the Saddambats?

CAREY: Yes, Mortal Wombat. One out of three. Next question: Wombats have an amazing defense advantage, what is it? A: Their butts are indestructible?

CAREY: B: They wear glasses. You wouldn't hit a marsupial with glasses, would you?

CAREY: Or C: They have a ton of horses and bayonets?

WAMBACH: I'm going to go A.

CAREY: A, yes, their butts are indestructible.

CAREY: Exactly. When pursued, they dive headfirst into a hole, and wait for the predator to bite their butt.

CAREY: Once he's latched on, they kick him until he's dead or loses interest.

BABYLON: What do you mean indestructible?

CAREY: They act just like my old girlfriends do.

WAMBACH: I thought that that would be the wrong answer because no butt is indestructible.

CAREY: Yeah, well, all right. Two out of three. Here's your last question. Let's go for a clean sweep. What do wombats and supermodels have in common? A: They both spend most of the day sleeping in their burrows?

CAREY: B: Both take two weeks to digest their food? C: Both are nocturnal and tend to feed on grasses, roots, and bark? D: All of the above?

CAREY: Yes, all of the above.

KASELL: Well, Abby had three correct answers, so she wins our prize for Lakshmi Shamagan.

CAREY: Now, listen, the U.S. Women's National Team is out on their Fan Tribute Tour, you can catch them next against Ireland on November 28th in Portland, Oregon. Abby Wambach, thank you so much for joining us on WAIT WAIT...DON'T TELL ME!

CAREY: See you, Abby. Thank you.