Accessibility links
Want To Be Rich? Be Lucky, Know The Right People Class, wealth and personal responsibility have dominated much of the national conversation throughout the presidential election. In the first of a three-part series, All Things Considered asks several wealthy Americans with very different perspectives how they account for their own economic prosperity.

As the presidential campaign has unfolded, the candidates have traded polemics about wealth, class warfare, dependency and the role of government.

And while it may be uncomfortable to admit, some Americans are simply more financially successful than others. But why do some achieve wealth, while others struggle? And what do we think explains our prosperity — or lack thereof?

In a three-part series, All Things Considered host Robert Siegel visited North Carolina's Research Triangle area, to ask people from very different walks of life how they account for their economic station in life. The series begins at the very top of the economic ladder. 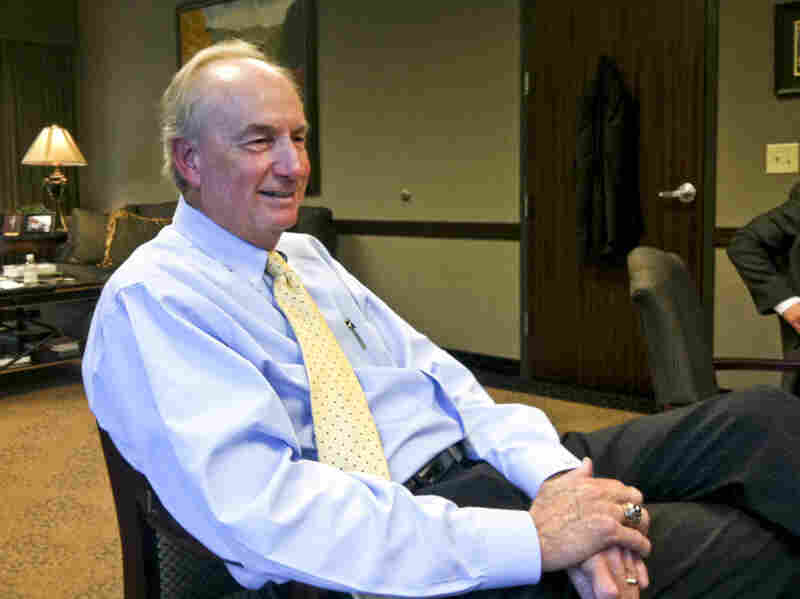 Bob Hatley's parents struggled to make ends meet when he was a boy. He says his competitiveness and his drive to emulate successful people eventually enabled him to open his own bank. Art Sliverman/NPR hide caption 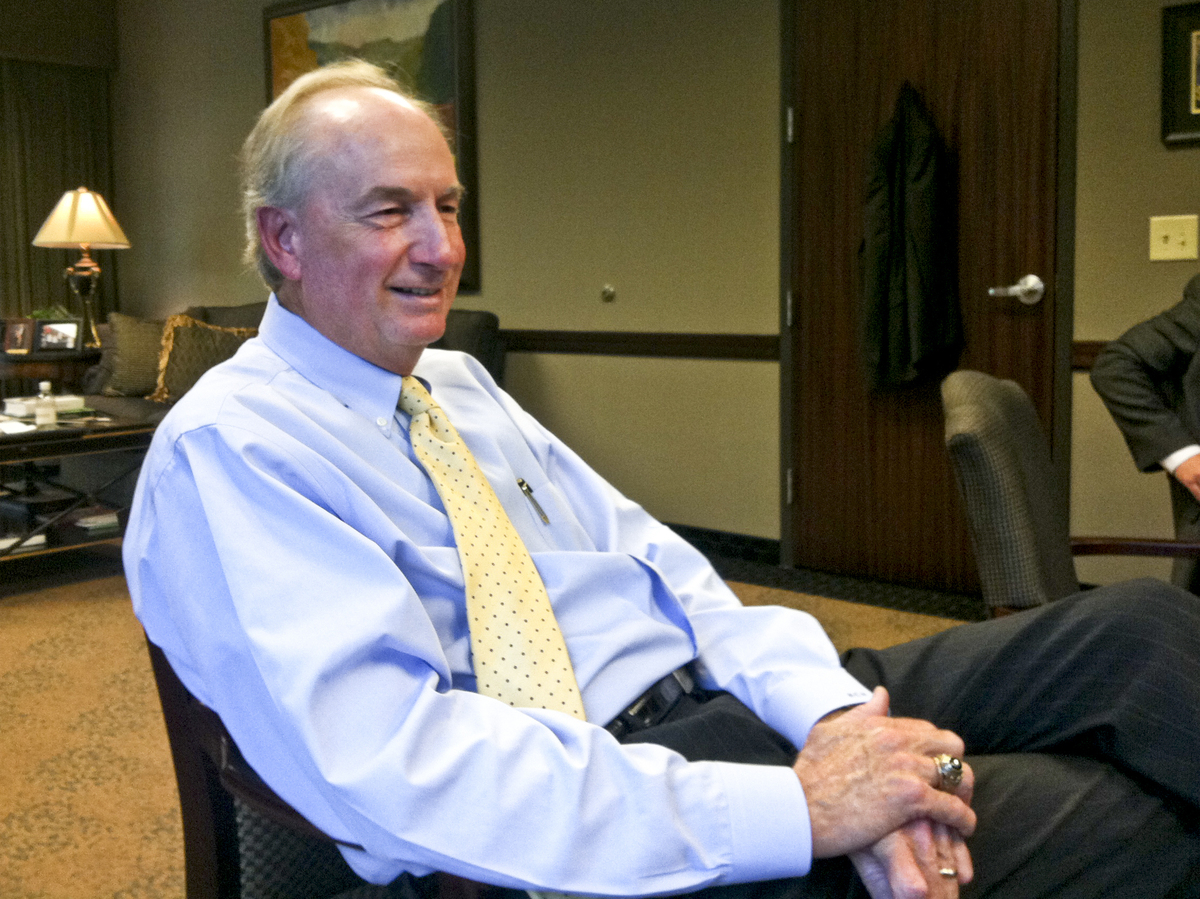 Bob Hatley's parents struggled to make ends meet when he was a boy. He says his competitiveness and his drive to emulate successful people eventually enabled him to open his own bank.

Bob Hatley, a lean 6 foot 4, brims with self-confidence. He runs Paragon Commercial Bank, which services midsize businesses. There are no branches or tellers, just headquarters in Raleigh, N.C., and an office in Charlotte.

Hatley, 62, grew up in a small North Carolina mountain town, the son of a "career military guy. ... He retired when I was in the seventh grade," he tells All Things Considered host Robert Siegel. "We never had a whole lot when he retired. We never knew we were poor, but we probably were close to it."

Today, Hatley is nowhere close to being poor. He started Paragon in 1998, and by 2009 it reached $1 billion in assets. He estimates that he's now worth about $5 million.

When Hatley talks about his success, he talks about wanting it — in fact, competing for it.

"I like to win," Hatley explains. "I like to be successful. I know people who have done very well in whatever line of work they've been in, and I wanted to be the same way. I wanted to have the trappings of success."

Capitalizing On Whom You Know

One important decision that led to his success, Hatley says, was moving to Raleigh, where he went to work for Wachovia Bank and made a point of meeting the right people.

"I learned a long time ago it's not what you know, it's who you know. Interpersonal skills trump brains," Hatley says.

To Hatley, plain old hard work was also key. "I think there's no substitute for [that]. I don't think anybody can sleepwalk their way through success." He acknowledges that some people "maybe inherited a lot of money, maybe they don't work have to as hard to keep it. But that certainly was not my case."

'You Make Your Own Luck'

I learned a long time ago it's not what you know, it's who you know. Interpersonal skills trump brains.

As a Republican, Hatley says he doesn't have "a whole lot of positive things to say about government programs." But, he adds, "I will say that everybody is subsidized by the government in one form or fashion. ... We all get our mortgage deduction. We complain about subsidies, but we all get them in some form."

When asked about the role of family background, race or gender in achieving in America, Hatley points out that he came from humble origins and had to make his own way. "People who use their family as an excuse not to achieve, I have no patience with," he says.

And luck? When it comes to achieving financial success, Hatley says it's important, but only one part of the equation.

"I think a lot of luck comes into play, but I've always advocated that you make your own luck," he says. "You know, you put yourself in position, [and] the lucky things come to you."

The recession has meant some tough times for Paragon Bank, Hatley says, but he says the company is healthy now. And he intends to make it bigger, and to continue to succeed.

Like Bob Hatley, Michael and Amy Tiemann of Chapel Hill, N.C., have also done very well financially. But while all three inhabit the most rarefied altitudes of the American economy, their accounts of how they got there — and their political leanings — differ dramatically.

Both in their 40s, the Tiemanns live far more modestly than their means would allow on a pleasant suburban street. While visibly prosperous, their neighborhood is not opulent — there are no gates, McMansions or Bentleys in sight.

"For the most part, I'd say we live ... a pretty normal lifestyle," says Amy, a writer, media producer and educator with a Ph.D. in neuroscience.

Michael, an executive at the software company Red Hat, was a pioneer of open source software back in Silicon Valley, where he started a company in 1989.

"I spent two years trying to gin up the interest among the business community to start [a] company for me, and I would be a technical resource," Michael says. "I failed to attract any interest whatsoever." 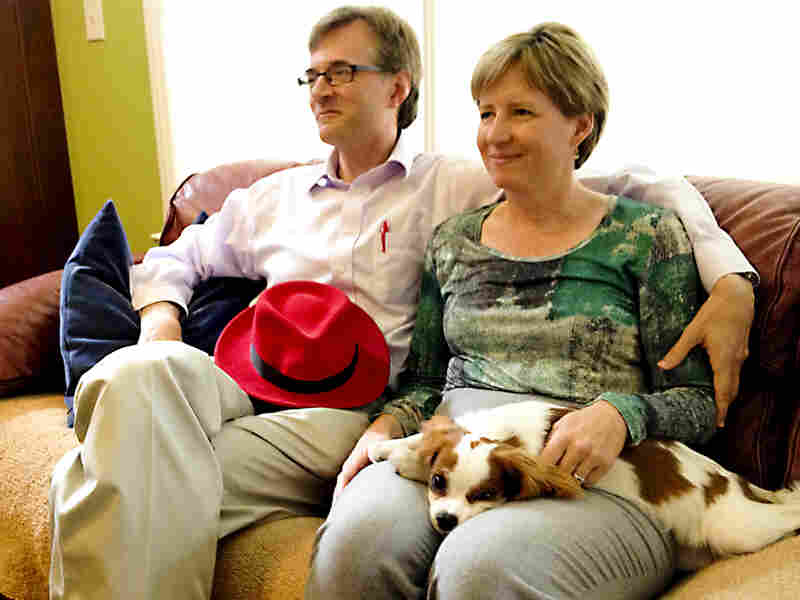 Michael and Amy Tiemann estimate their personal wealth at about $25 million — and say luck played no small part in their financial success. Art Silverman/NPR hide caption 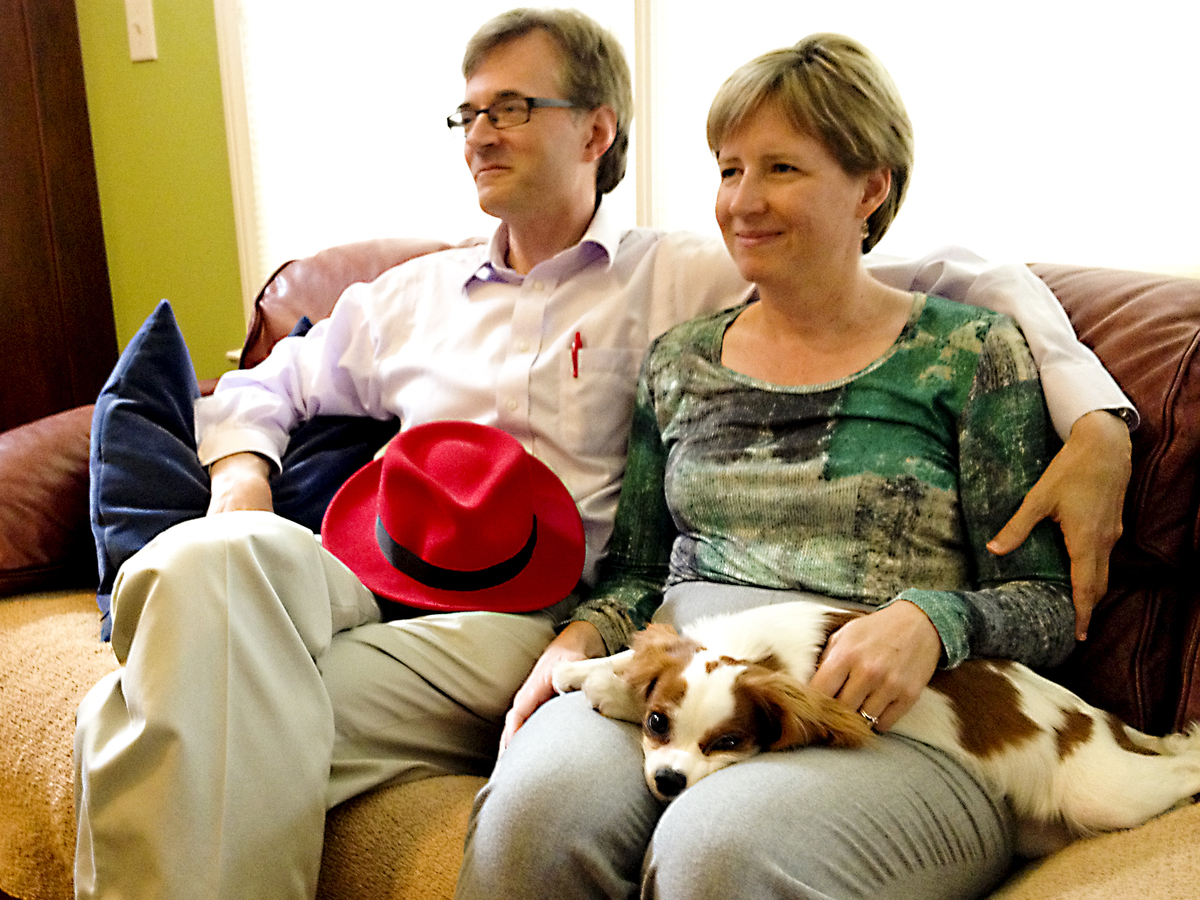 Michael and Amy Tiemann estimate their personal wealth at about $25 million — and say luck played no small part in their financial success.

That's when he realized, he says, "that if nobody was interested in starting this company, I'd have no competition. And if I had no competition, how could I fail?"

With that in mind, he recruited two friends to join him, each pooling $5,000 each. "I only had money in my checking account to post the first $2,000," Michael says, laughing. "So I was already $3,000 in debt to my co-founders when we started the company."

But 10 years later, they sold that business to Red Hat for $697 million. And while the Tiemanns are not worth that much personally, they admit — with great reluctance — to wealth of about $25 million.

To Michael and Amy, luck has played a tremendous part in achieving their financial status. They were both raised by educated parents who paid for them to be educated in turn; Michael at the prep school Andover and the University of Pennsylvania, Amy at Brown and Stanford universities.

"We understand that we've been very, very lucky," Michael says. And luck, he believes, can often be a whole lot more significant than intelligence.

Amy also notes the good fortune of entering their professional lives just as technology was playing an ever more prominent role in the economy.

"When I think of luck, I also think of being fortunate to be born when the Internet revolution, the personal computer revolution, was happening," Amy says. "I think that's just the most extraordinary time to be part of. And obviously there are so many business opportunities tied to that."

How The Poor, The Middle Class And The Rich Spend Their Money

The couple have been generous donors to Democratic campaigns. On their kitchen counter, there's a photo of the couple at a White House holiday party with the Obamas.

When asked about the role of government programs in their financial success, Michael says his original research back in Silicon Valley was supported by government money via the Defense Advanced Research Projects Agency, or DARPA.

"I was a proud poster child," Michael recalls. "I would go to Washington and talk about how imaginative and creative and how empowering U.S. research dollars had been."

While the Tiemanns emphasize luck and circumstance when explaining their financial status, they don't hesitate to point to hard work, as well.

"When I was working really, really hard, I had no time to spend any money," Michael says. "So what little money I was earning I was able to save. And that gave me choices for the future about how much I could afford to reinvest into the company." Money that enabled him to open offices in Europe and Japan, for example.

While the Tiemanns are almost embarrassed to talk about their wealth, they're not at all reluctant to discuss the biggest project they're spending some of it on. Years before Silicon Valley, Michael Tiemann was a choirboy who studied piano. This year, he and Amy opened a recording studio on a patch of Carolina woods.

It's an audio engineer's dream works — and perhaps a testament to another impetus to acquire wealth: the passionate desire to do something creative with it.