Accessibility links
The Industrious Lives Of Halloween's Ghouls For many of the creepy characters who staff haunted houses during the Halloween season, it's a labor of love. But it's not just fun and games.

Go behind the scenes to see what life is like for the monsters and ghouls at haunted trails.

The Industrious Lives Of Halloween's Ghouls

The Industrious Lives Of Halloween's Ghouls

Go behind the scenes to see what life is like for the monsters and ghouls at haunted trails. 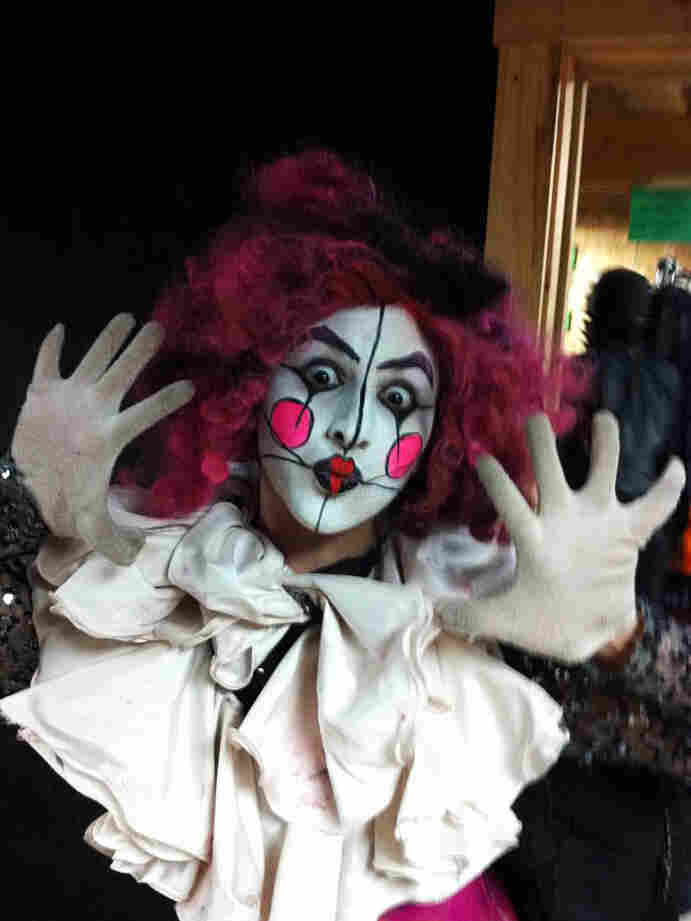 Being a monster — or creepy clown — in a haunted house can be downright strenuous with all the jumping and running. And if the scares are too real, it can get physical. Courtesy of Nick Markoff hide caption 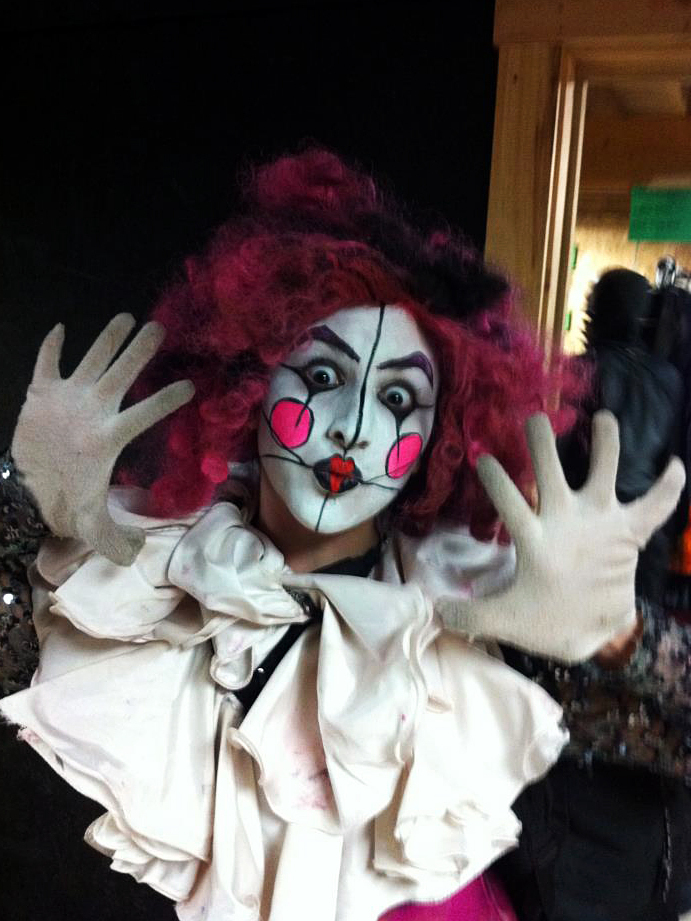 Being a monster — or creepy clown — in a haunted house can be downright strenuous with all the jumping and running. And if the scares are too real, it can get physical.

Halloween might be the best day of the year for kids who love candy and grown-ups who love to be scared, but it is also the last day of work for thousands of ghouls and clowns.

Every year, people from all walks of life — firefighters, students, preschool teachers — adopt the rather unconventional part-time job of scaring at haunted attractions. They spend a month caking their faces with makeup, dipping their bodies in jelly-like substances that resemble blood and practicing chilling screams and creepy laughs until they're pitch perfect.

For many, being scary is a labor of love. But the job is actually a lot of work — much more than hiding behind a tree and shrieking boo.

At Markoff's Haunted Forest in Maryland, about 200 blood-soaked monsters and clowns gather for a daily meeting before their victims arrive. Manager Jenny Alderton cups her hands around her mouth and delivers what could almost be a pre-game pep talk, if it weren't for all the makeup.

"Is everyone tired from last night?" Alderton shrieks.

"No!" the creatures roar.

"No! No is the right answer," Alderton yells. "You should've gotten a lot of rest last night, come back rejuvenated and ready to go!"

The daily work of a ghoul or zombie starts well before the crowds arrive. At Markoff's Haunted Forest, it all starts in Andrea Reilly's costume room. For the past 10 years, she's collected racks and racks of mismatched black outfits and dirt-stained ensembles.

"We have our zombie politicians and our junkyard politicians on this row," Reilly says, sifting through the clothes hangers. "We got our goat people, our snake people, our monk robes and suits in the next row."

Amid the aisles of gory outfits, 27-year-old Jason Alpern adjusts his green Joker-like suit and brandishes his pocketknife threateningly.

"You know what I like about knives?" he asks ghoulishly. "You can get up close and personal!"

Alpern is rehearsing his lines, transforming into character. He expects a workout tonight with all the lurking, creeping and jumping that comes with being a clown.

"I could probably eat like a wedding cake every night and I'd probably still lose weight from this job," he says.

Outside the costume room, 20-year-old Keenan Smith scopes out the haunted trail for a hiding spot before the customers arrive. He's dressed all in black, and his mask resembles some kind of ambiguous creature lurking under the bed.

"I think it's more of a gremlin-type troll thing," Smith says. "Some people call me a leprechaun."

Whatever it is, tonight he's a deranged stranger. Other nights, dressed in the right pink tutu, he makes quite a convincing little girl. 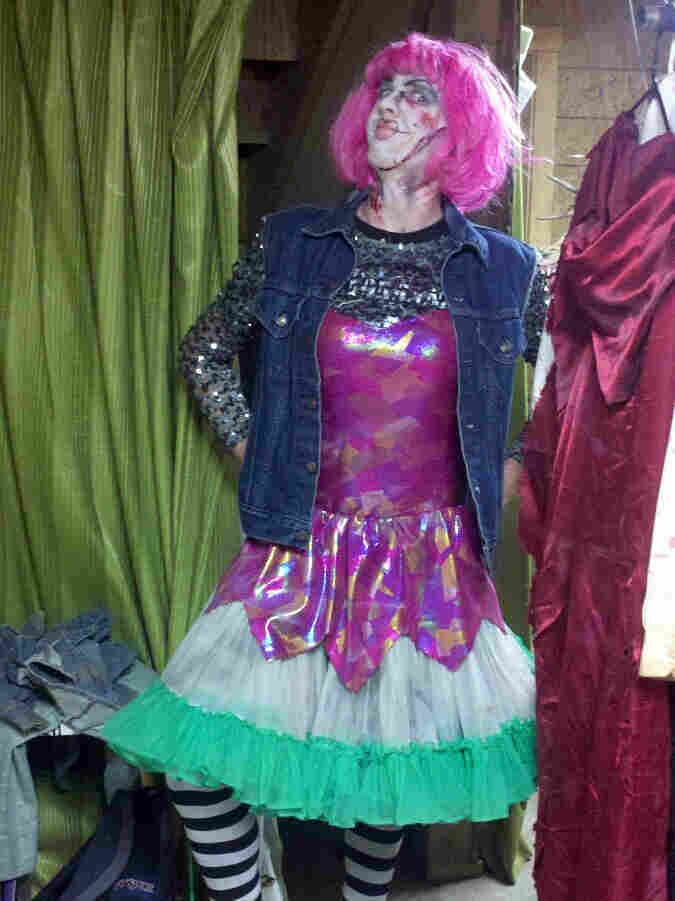 Keenan Smith sometimes plays a creepy little girl at Markoff's Haunted House in Maryland. The 20-year-old says he makes a pretty convincing girl, until he talks, which makes it all the creepier. Courtesy of Kenan Smith hide caption 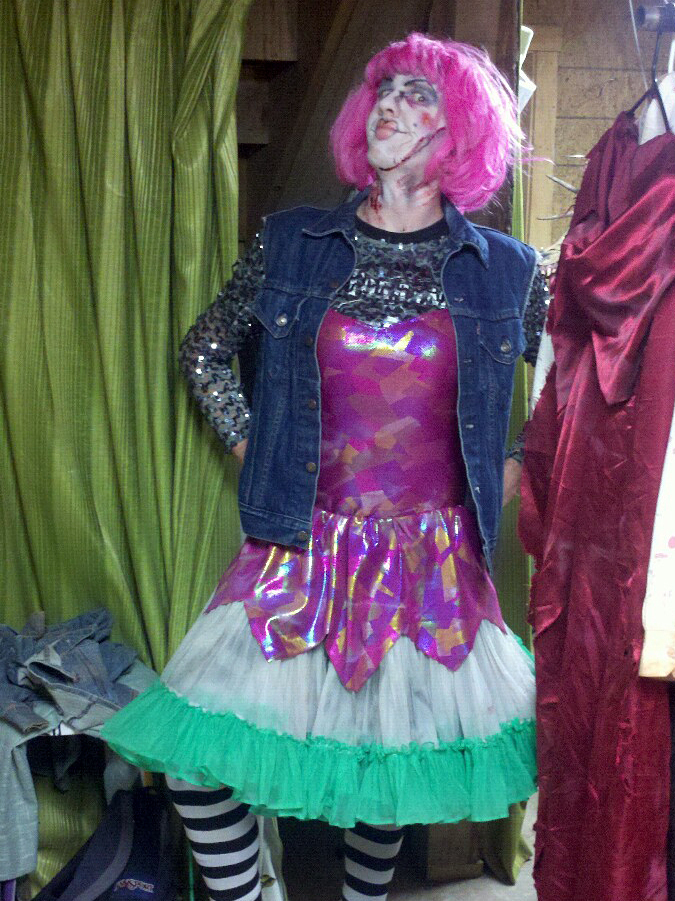 Keenan Smith sometimes plays a creepy little girl at Markoff's Haunted House in Maryland. The 20-year-old says he makes a pretty convincing girl, until he talks, which makes it all the creepier.

"I am the prettiest princess," Smith says, adopting a mock-girlish voice. "And they have no idea that I'm a guy until I do that."

The effect is truly creepy: So creepy, in fact, that some frightened customers fend off his scares with ... well, whatever they can.

"Last year I actually got stabbed in the face with a lit cigarette directly underneath my left eye," Smith says.

But Smith wears his bruises and cuts proudly. They're like battle scars, clear indicators of a job — or scare — well done.

Arianna Dastvan, dressed as a mutant pig, agrees that the job gets physical.

"I've had customers that have tried to tackle me, so I tackle them back because it's self-defense," the 20-year-old student says.

As the sun sets, both Dastvan and Smith are giddy, anticipating a fear-filled night. They fine-tune their costumes as manager Alderton gives final instructions: Expect large groups and no breaks.

Ghouls and clowns pat each other on the back and melt in their dark corners. The six-hour shift of terror begins.