Accessibility links
Interview: Deb Perelman, Author Of 'The Smitten Kitchen Cookbook' Blogger and now cookbook author Deb Perelman insists you don't need a big or gourmet kitchen to make good food. Since 2006, she's been tracking down, testing and blogging about recipes she thinks pretty much anyone can make — all from her tiny New York kitchen. 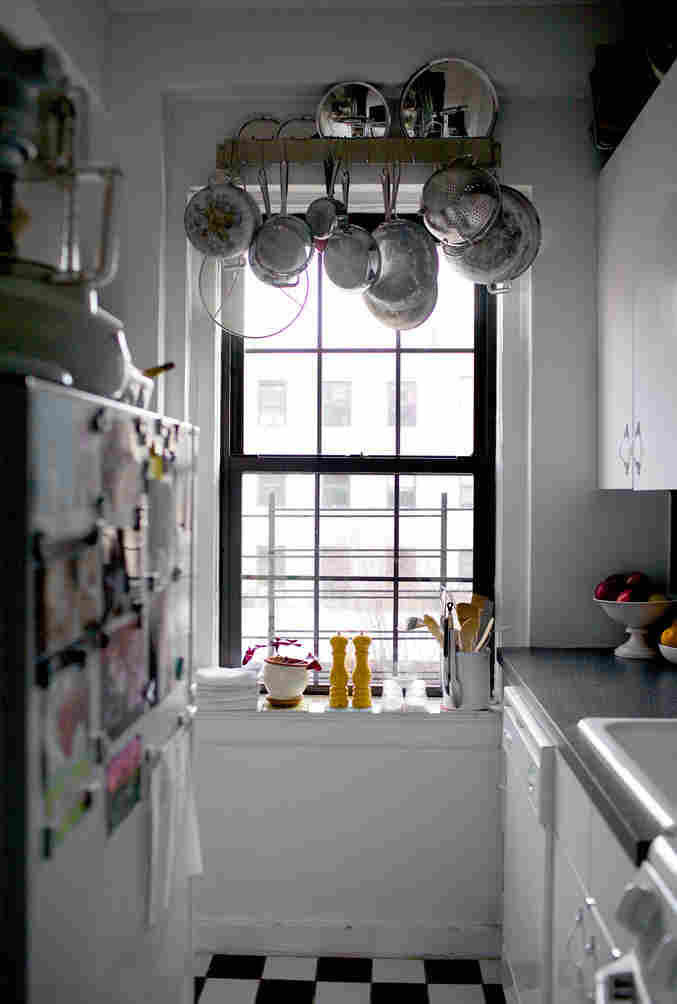 Deb Perelman's kitchen is 3 feet by 6 feet, and the only counter is a meager 2 feet by 3 feet, but she says the size of your kitchen shouldn't get in the way of what you cook. Courtesy of Deb Perelman hide caption 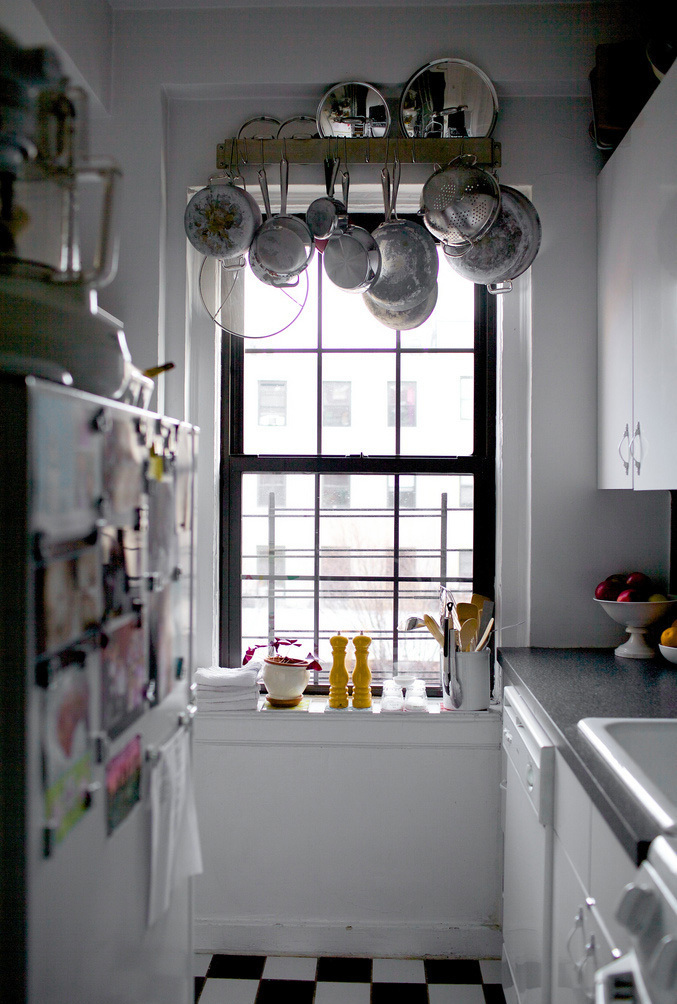 Deb Perelman's kitchen is 3 feet by 6 feet, and the only counter is a meager 2 feet by 3 feet, but she says the size of your kitchen shouldn't get in the way of what you cook.

Think of the smallest kitchen you can imagine, and then take away a few square feet. That's Deb Perelman's New York kitchen. It's so small that the blogger, and now author, literally has to wedge herself between the stove and the refrigerator to cook.

Perelman insists you don't need a big or gourmet kitchen to make good food — and she's done a good job of proving it. Since 2006, she's blogged about cooking on her website, Smitten Kitchen, where she tracks down and tests the best recipes for food she thinks pretty much anyone can make, then snaps a picture of the final product and posts it. Her recipes, photos and funny posts attract some 8 million views a month, and now they can also be found in The Smitten Kitchen Cookbook.

"I hear people say, 'I have a tiny kitchen and I don't think I can cook the stuff that you cook in it,' " she says. "They may not realize that my kitchen's tiny , and I'm like, 'Uh-uh, you can't use that excuse with me. You're going to have to find another one.' "

By now, Perelman has discovered that the key to cooking in such a small space is staying organized.

"You just need to clear the decks of what you have. I don't have any canisters out on the counter, I do have some seasonings, and I pretty much make sure it's completely clear when I get started," she says. "When you go to a restaurant and they have amazing food, all those line cooks, they do not have more space than this. They just have a little station and they know how to manage it. They do prep work and they put it in little bowls around and they have one cutting board and they have one knife and they get their work done in a small space." 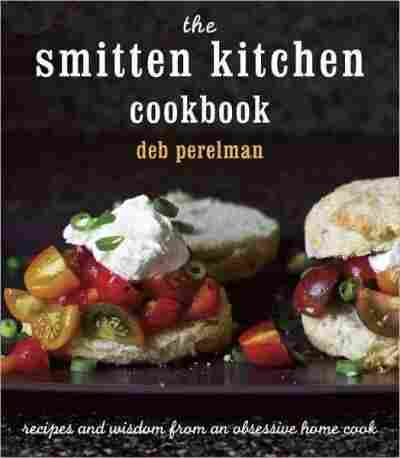 Perelman is a perfectionist, but that doesn't mean you have to hunt down precious ingredients to cook her meals. She writes for people who don't necessarily have a lot of time or money. So if a recipe calls for olives, for example, she'll try it with the canned variety and let her readers know if it works. On one October morning, she used the humblest of ingredients to make a simple but delicious breakfast: potato pancakes with a fried egg on top.

"These are just those everyday baking potatoes," she says. "I think they're the best for latkes. I've made versions with fancy potatoes; I've made them with buttery Yukon Gold. They're all great, but you don't need it to make good potato pancakes."

Perelman puts the spuds into the food processor sideways, so they come out in long, ropey strands. She shreds some onions into the mix, then wrings out the excess liquid in a tea cloth. She says skipping that last step would make for a soggier, steamier pancake without a crisp edge.

Next, she tosses the potatoes and onions lightly in a mix of flour, one egg, seasoning and her secret ingredient, a little bit of baking powder. The mixture looks like it will barely hold together as she throws it into her favorite cast-iron frying pan and cooks it over very high heat.

"So we are going to eyeball here like a quarter of the batter and I'm gonna spread this out, this mound, this, like, bundle of hay," she says.

Surprisingly, the mixture does hold together. Perelman credits the single egg, which is just enough to make the flour-coated potato strands stick without making them eggy.

Over the years, Perelman says, the comment section of her blog has become invaluable to how she writes her recipes. 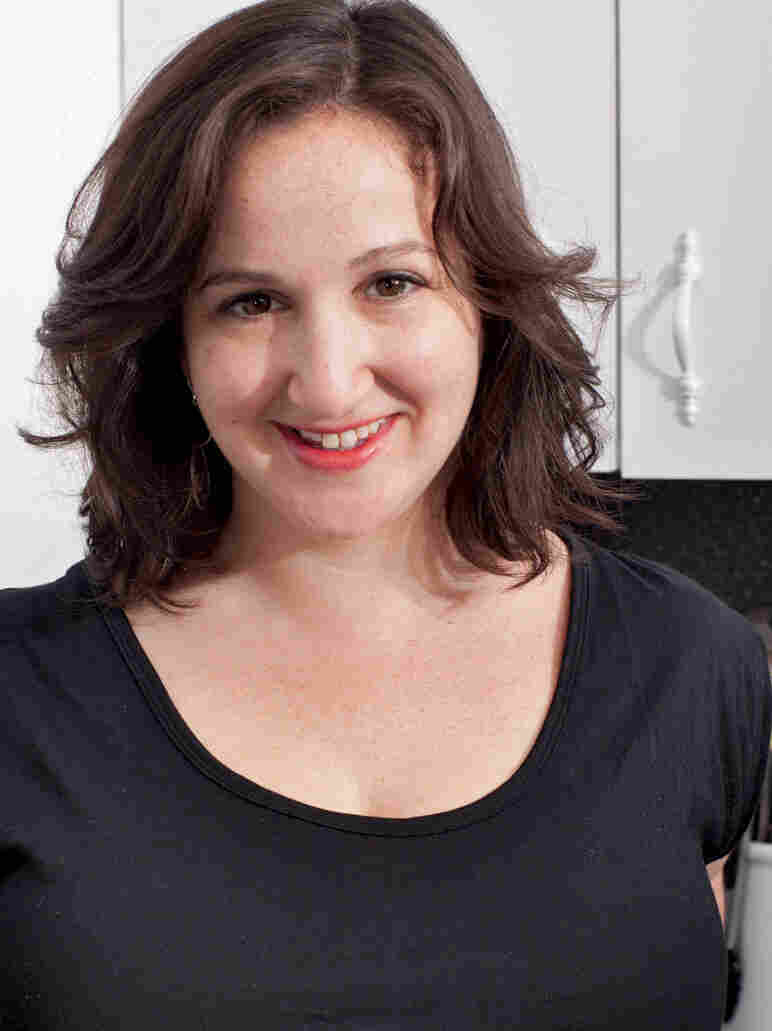 Deb Perelman lives in New York with her husband and son. She likes bourbon, artichokes and things that taste like burnt sugar. Elizabeth Bick/Courtesy of Alfred A. Knopf hide caption

"I know what I want to cook, but I don't really know all the ways that other people are going to have trouble with it until I read the comments," she says. "And so it's really been great. You know, I'll know that somebody's going to say, 'Do I have to use table salt?' or 'What if I only have Yukon Gold potatoes?' or 'My eggs are small, not large.' And all of these questions, like, I can answer them very quickly because I've been answering them for years. I hope that it's helped me become a better recipe writer."

When the potato pancakes are a golden brown with crispy, lacy edges, Perelman takes them out and keeps them warm in the oven while she fries some eggs.

"And again I'm gonna get this pan really hot because I personally like fried eggs that have been cooked quite quickly," she says as she works.

When she places her crispy fried egg on top of her crispy potato pancake, it looks pretty as a picture. This is when she usually reaches for her camera.

"I keep my camera right outside on the nearest shelf that's taller than my son," she says. "It's always ready. The only thing I would do is I would probably clear a little of the clutter off the counter. Not all of it, because it's a real kitchen. But just — it's pretty cluttered so I might take one or two things off so you know what you're actually supposed to be looking at and not the fact that I haven't done dishes yet today. And I would just take a picture just like that."

It's a photo you'd think she spent hours arranging — and the dish tastes just as good as it looks. 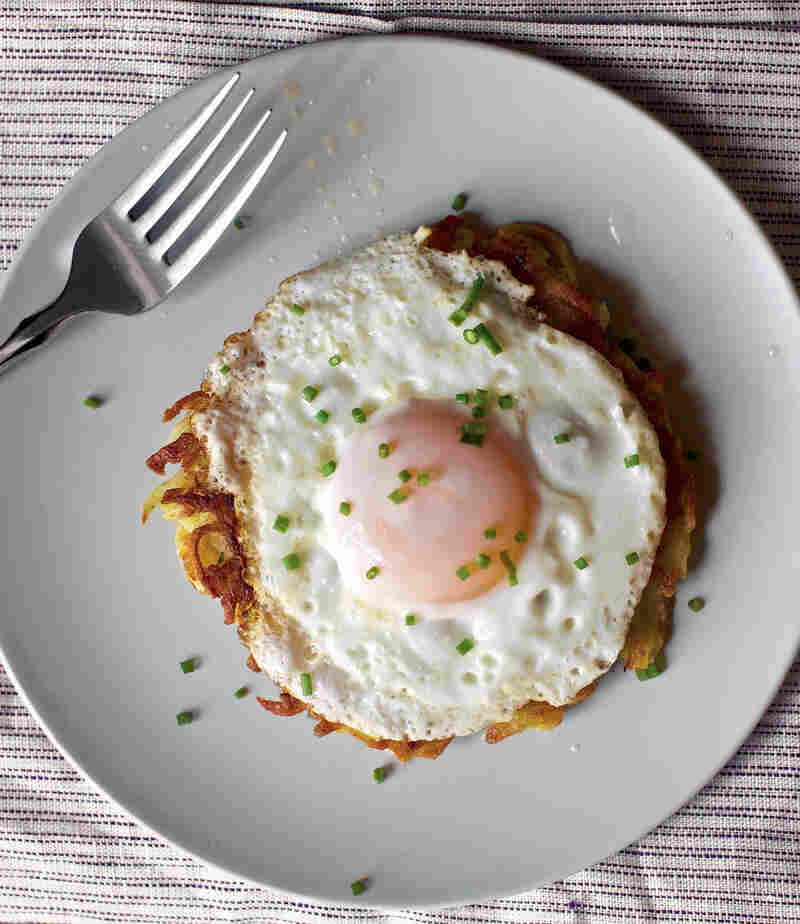 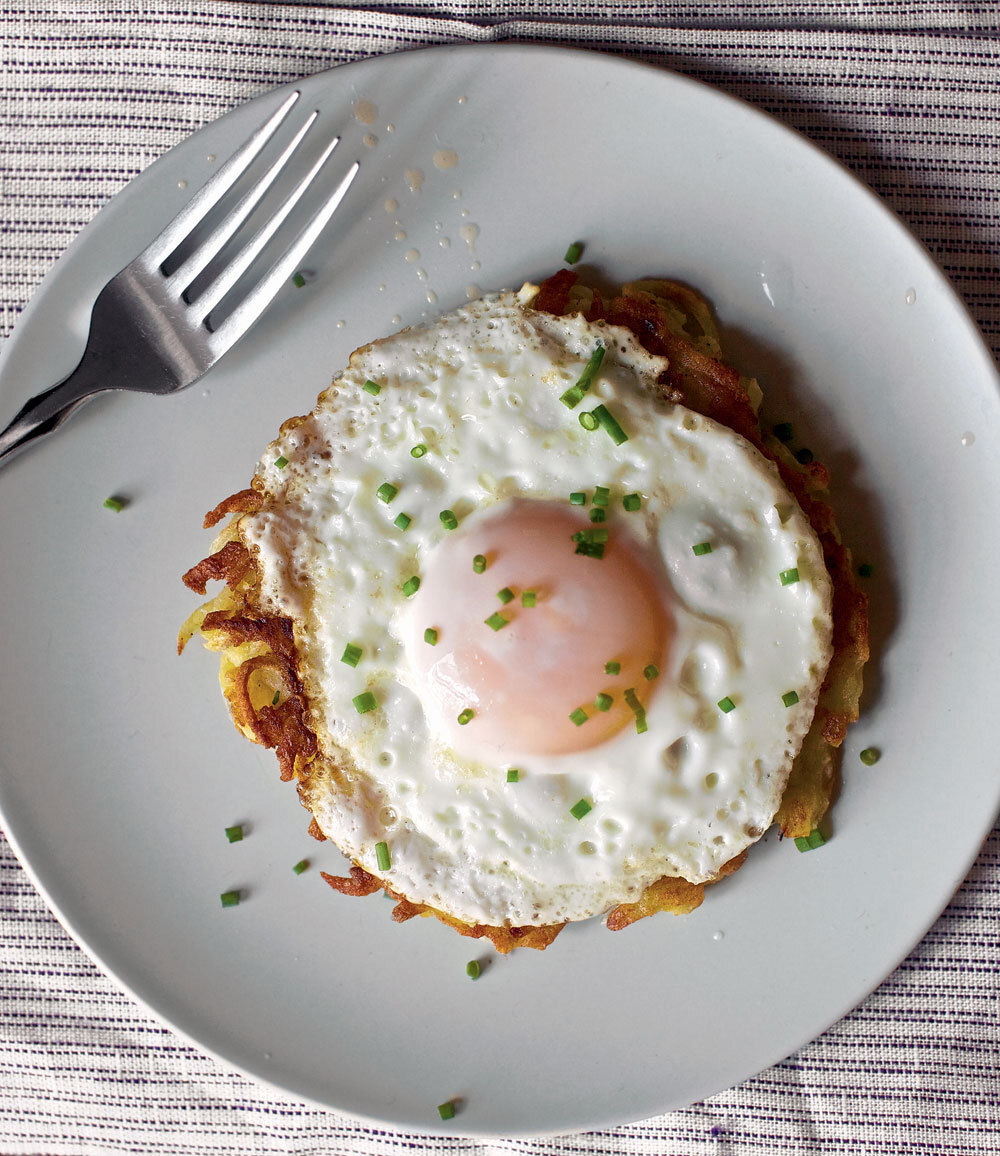 Just about everyone who makes breakfast has a version of breakfast potatoes, be they hash browns or home fries or skillet-smashed potatoes. And just about all cooks make them their very own way — the way they think potatoes should be — and though they may tolerate other breakfast-potato formats, they secretly always think that their personal method, the one they learned from their mama/that diner on Main Street/their friend the chef is the best.

Personally, I just want to eat latkes all year round, and I maintain that if you're limiting your latke consumption to the eight nights of Hanukkah, you are missing out. The latke, at its base, is the ideal breakfast potato — humble russets and everyday onions, shredded, mixed with the slimmest amounts of egg and flour, and fried until brown and crisp on both sides. Latkes hold together better than hash browns, which allows you to make them bigger. And the bigger they are, the more ideal base they become for the other perfect breakfast, a fried egg.

Preheat your oven to 250 degrees. Line a baking sheet with foil, and keep in oven until needed.

In a food processor or on a box grater, coarsely shred the potato and onion. For longer, moplike strands, I prefer to lay the potato sideways in the chute of the food processor. Transfer the shredded mixture to a square of cheesecloth or lint-free dishtowel, and gather the ends to wring out as much water as possible. Let it stand for 2 minutes, then squeeze it out again.

In a large bowl, whisk the flour, baking powder, salt, pepper and egg together. Stir in the potato-onion mixture until all the pieces are evenly coated.

In a small, heavy skillet (cast iron, if you have one), heat 2 tablespoons of vegetable oil until it shimmers. Drop one-quarter of the potato mixture into the skillet, and flatten with the back of a spoon to a 5-inch round. Cook the latke over moderate heat until the edges are golden, about 4 to 5 minutes; flip, and cook until golden on the bottom, about 3 to 4 minutes more.

Transfer latke to the prepared baking sheet in the oven. Repeat process with remaining latke batter in three batches, creating a total of four large latkes, being sure to add more oil as needed and letting it fully reheat between pancakes. Keep latkes warm in oven until needed. Serve latkes warm in four wedges with eggs or whole with a fried egg atop each.

Do Ahead: Latkes are a do-aheader's dream. You can also keep the latkes warm in the oven, on low heat, for an hour or more, if you're waiting for stragglers to arrive. If already cooked, they keep well in the fridge for a day or two, or in the freezer, well wrapped, for up to 2 weeks. Reheat the latkes in a single layer on a cookie sheet in a 300-degree oven until they're crisp again. Bonus: If you undercooked them a bit, or didn't get them as brown as you'd hoped, you can compensate for this in the oven.

Cooking Note: For neat edges and a thinner rostilike appearance, you can press each pancake into a 6-inch skillet and proceed to cook according to directions. For lacy, craggy-edged latkes, form the pancakes in a larger pan.

Excerpted from The Smitten Kitchen Cookbook, by Deb Perelman. Copyright 2012 by Deb Perelman. Excerpted by permission of Knopf, a division of Random House Inc. All rights reserved. No part of this excerpt may be reproduced or reprinted without permission in writing from the publisher.