Accessibility links
Even Americans Find Some Britishisms 'Spot On' Adding a foreign word to your vocabulary is like adding foreign attire to your wardrobe. Sometimes you do it because it's practical and sometimes just because you think it looks cool. Linguist Geoff Nunberg says Americans' use of "spot on" falls somewhere between affectation and flash. 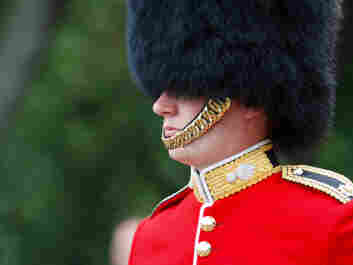 Mitt Romney was on CNN not long ago defending the claims in his campaign ads — "We've been absolutely spot on," he said. Politics aside, the expression had me doing an audible roll of my eyes. I've always associated "spot on" with the type of Englishman who's played by Terry-Thomas or John Cleese, someone who pronounces "yes" and "ears" in the same way — "eeahzz." It shows up when people do send-ups of plummy British speech. "I say — spot on, old chap!"

But that wasn't really fair to Romney. Actually, "spot on" doesn't sound snooty when it's used as an adjective meaning accurate or on-target, as in "a spot-on impersonation." And it has become more common in American speech than it was even 10 years ago, when it made a notable appearance in a 2003 episode of The Wire. Detective Jimmy McNulty is posing as an English businessman in order to bust a Baltimore brothel. He speaks in a comically bad English accent, the inside joke being that McNulty was actually played by the English actor Dominic West. Before he goes in, his boss Lt. Daniels and Assistant DA Rhonda Pearlman are prepping him for his role and giving him the signal to have them come in to make the arrests:

Adding a foreign word to your vocabulary is like adding foreign attire to your wardrobe. Sometimes you do it because it's practical and sometimes just because you think it looks cool.

Lt. Daniels: It'll be your call when we come through the doors. You want us in, you say ... [turns to Pearlman] what was it?

Pearlman: "Spot on." It means "exactly." And remember, they have to bring up the money and the sex first, then an overt attempt ... to engage.

McNulty (in an exaggerated English accent): Spot on!

Now, I doubt whether somebody like Daniels or McNulty would know the expression even now. But you do hear it from decidedly unplummy people like Sarah Palin and Rick Perry.

"Spot on" falls somewhere in the blurry region between affectation and flash, like a lot of the Britishisms that have been showing up lately in American speech. The New York Times blogger Ben Yagoda has a site listing more than 150 of these imports. They're a motley crowd, from "daft" to "dodgy" and "keen" to "kerfuffle." Adding a foreign word to your vocabulary is like adding foreign attire to your wardrobe. Sometimes you do it because it's practical and sometimes just because you think it looks cool.

Some of the new arrivals are clearly useful. "One off," for example — it's a nicely concise noun for a one-time event. Other words have a whimsical appeal. "You're a dab hand at the Google," I told my wife the other day. I'd put "spot on" and "gobsmacked" in that group. And still others announce the arrival of imported sensibilities. "Snarky," for example. It was pretty much unknown in America before the early 2000s, when it was was attached to the tone of snide knowingness that has become the stock patois of sites like Gawker, Wonkette and Deadspin.

But other words are imported just for effect. "I'm not very keen on it, but I'll have a go." People claim to discern some useful nuances of meaning there, but who are they kidding? It's like explaining that you bought that $800 Burberry plaid tote bag because it gives you a better grade of vinyl.

I got a call not long ago from a BBC reporter doing a piece about these Britishisms. She described me as quivering with revulsion over the expressions. It must have been a bad phone connection. I mean, when I quiver, I quiver, but not about some American saying "dodgy" or "keen." Mostly I'm a little embarrassed for the speaker, particularly when the word adds nothing but the clink of teacups. "Fortnight"? "Bespoke"? Really?

Actually, the British are the ones who have conniptions over foreign words. Whenever the British media run a piece on Americanisms, it gets hundreds or thousands of comments, most of them keening indignantly over the American corruption of English: "I cringe whenever I hear someone say 'touch base.' " "Faucet instead of tap??? Arrrrrrrghhh!"

That might seem a little over the top for a race that's not known for its demonstrativeness. But the Brits have had to endure an inundation of American popular culture that has saturated every corner of their vocabulary with Americanisms — probably including the word "Brits" itself. Not long ago, the Financial Times columnist Matthew Engel warned that if the flood of Americanisms isn't stanched, it will lead to "51st statehood."

We react very differently to Britishisms. To the British, our words "wrench" and "sweater" are abominations; to us, their words "spanner" and "jumper" are merely quaint. To Americans, after all, Britain is just a big linguistic theme park. The relative handful of Britishisms that do find their way here may raise some eyebrows, but they're hardly a threat to American culture. After all, British English comes to us through a much narrower pipe than the one that floods Britain with our words. They pick up our language from Friends and The Avengers. We pick up theirs from Downton Abbey and Inspector Morse. And when they do send us an occasional blockbuster like Harry Potter, they're considerate enough to Americanize "dustbin" to "trash can" and "pinny" to "apron."

No doubt some of the newcomers will wind up as naturalized American citizens. After all, "tiresome" and "fed up" were considered affected Britishisms when they made their American debut in the 19th century. My guess is that "spot on" is already on the way to becoming everyday American. But it will be awhile yet before it reaches the cultural outer boroughs. Like the Baltimore Police, I think I'll hold back until I hear it from McNulty.