Accessibility links
Vigilantes Spray-Paint Sexual Harassers In Cairo Sexual harassment has been getting worse in Cairo and spiked during the recent Muslim holiday. In response to the growing incidents and to police indifference, activists launched a "Be a Man" campaign, and vigilantes are now taking to the streets. 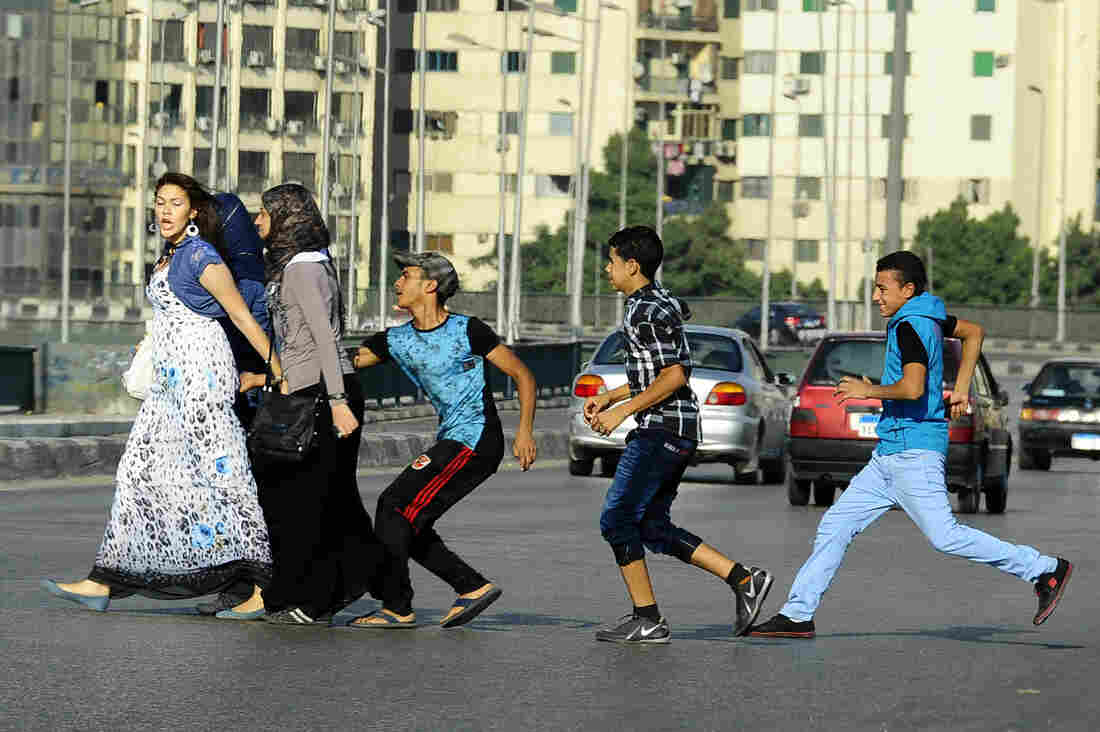 A young Egyptian man grabs a woman crossing the street with her friends in Cairo. Vigilante groups are now taking to the streets and spray-painting the clothes of the harassers. Ahmed Abdelatif/AP hide caption 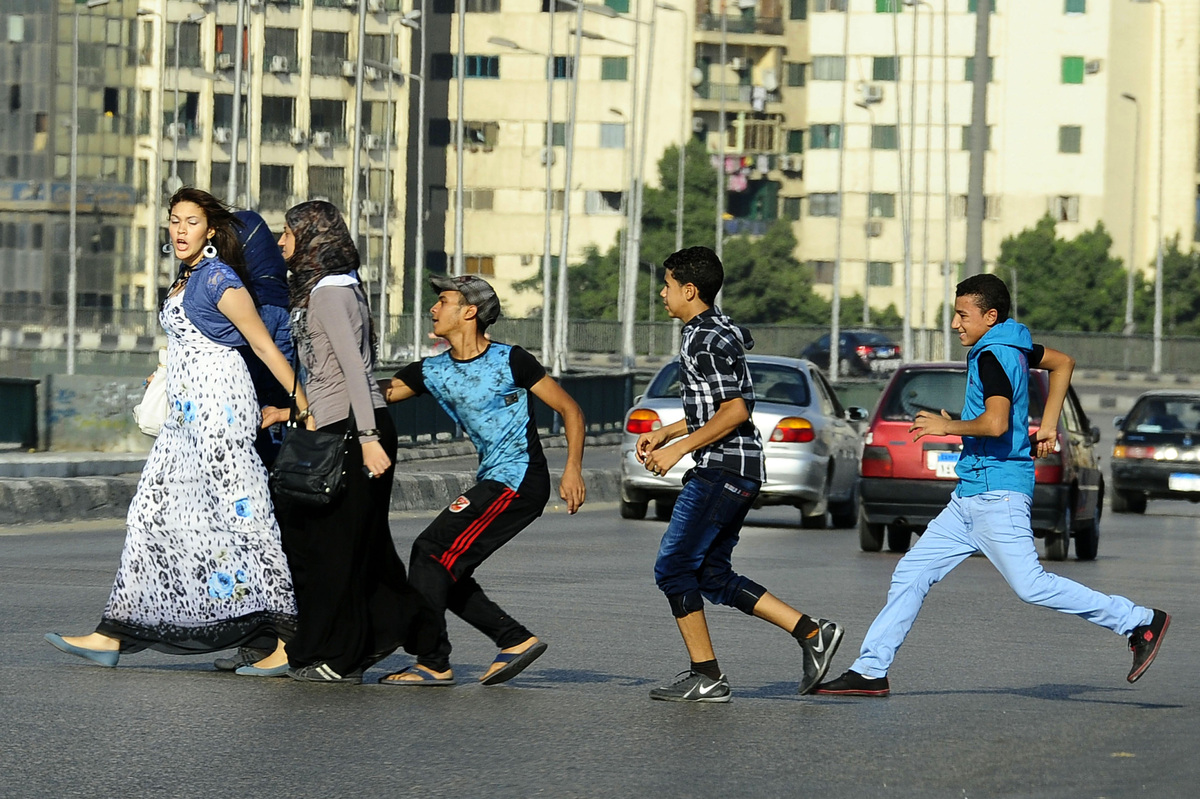 A young Egyptian man grabs a woman crossing the street with her friends in Cairo. Vigilante groups are now taking to the streets and spray-painting the clothes of the harassers.

Over the recent four-day Muslim holiday of Eid al-Adha, more than 1,000 sexual harassment complaints were filed in Egypt.

President Mohammed Morsi has ordered an investigation, but some are not prepared to wait for the government and the police to act.

Young men have formed vigilante groups and are hunting down perpetrators of sexual harassment in the capital, Cairo. Some are applauding the action, while others say it's a sign of how lawless Egypt has become.

The young vigilantes wear yellow vests as they gather in Cairo's Tahrir Square, the focal point of last year's revolution. They carry cans of spray paint, but none is a graffiti artist.

They are part of the new campaign called "Estargel!" or "Be a Man." Emblazoned on the back of their vests are the words "Harassment Prevention." The spray paint is used to tag grabby young men and send them on their way, marked as harassers. 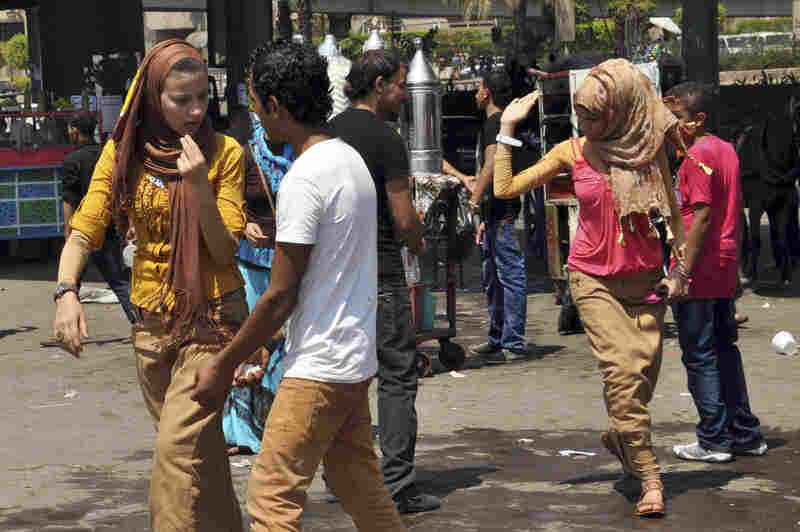 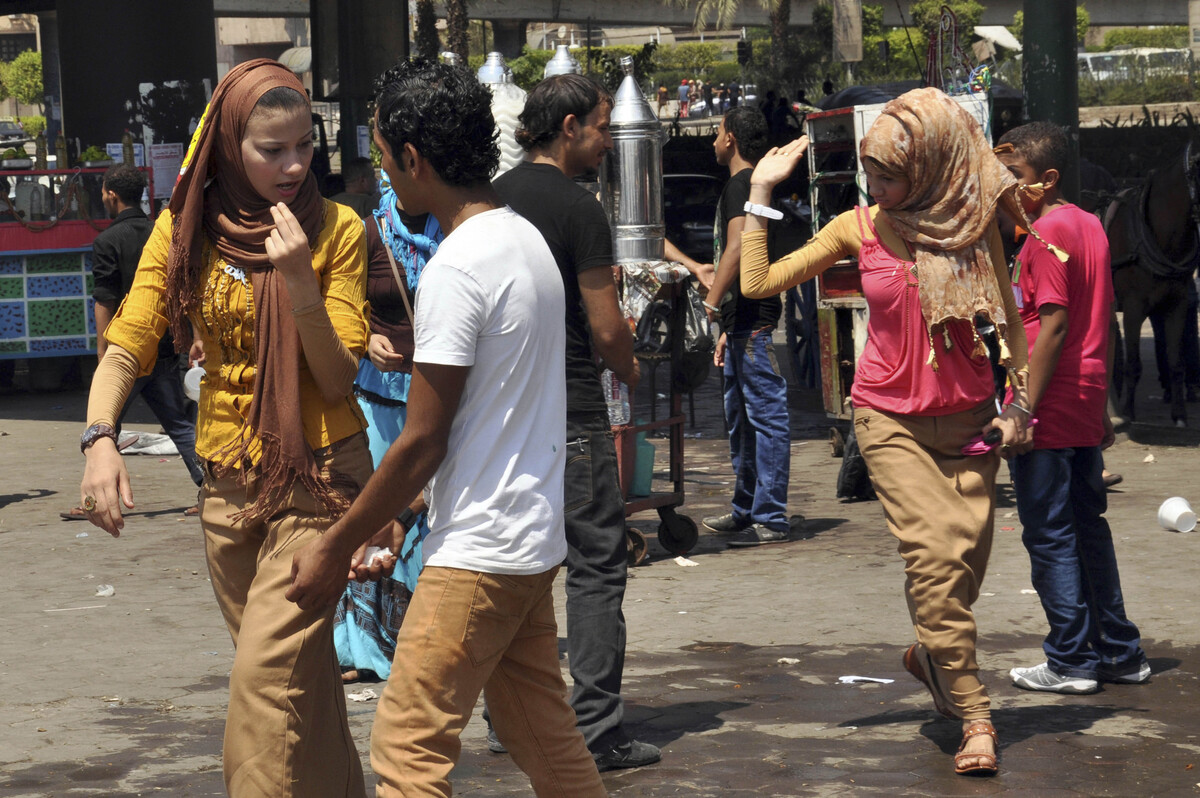 One vigilante, Muhab Selim, is lecturing young men gathered nearby on why it's wrong to harass women.

Selim runs ahead of the other volunteers searching for men on the prowl.

The methods used to combat harassment are not entirely nonviolent. Selim sees a man he thinks has touched a girl. He grabs him and slaps him in the face. A brawl breaks out. One of the volunteers yells to the others not to hit anyone unless they're sure he harassed a girl.

In Cairo, harassing a woman in the street has become common practice, and it predates last year's uprising that toppled the former president, Hosni Mubarak.

"It was a very widespread practice under Mubarak, the idea of assaulting and sexually harassing female activists and journalists using conscripts or thugs. And when we filed complaints, no measures were taken," says Janette Abdel Alim, an activist with a group called I've Seen Harassment.

Alim says the problem of harassment has continued since Mubarak's ouster early last year. Mass political protests have been tarnished by harrowing assaults on women by mobs of young men.

In response, a flood of anti-harassment groups has popped up across the city. Alim defends these groups, saying they draw attention to a problem that is not a high priority for the government right now.

But some worry that the cure could be as bad as the affliction. On another recent patrol, the vigilantes caught three young men they accused of making a grab for a girl's behind.

The scene was chaotic. The men looked terrified as the Be a Man volunteers pinned them down and spray-painted the word "harasser" on the backs of their shirts. Some were sprayed in the face.

"If I was walking in the street and I molested a girl and I got beat up and trashed and had my dignity put into a bin," he says, "I think the next time I'll think a thousand times before I try to act funny with a girl."

The group has already had its fair share of run-ins with the police. On the first day of the campaign, one of the vigilantes got in a fight with a cop who refused to arrest the alleged harassers caught by the vigilantes.

Taymor says that because the police don't want to act, it's up to people like him to make a statement that touching women in the street is unacceptable.