Accessibility links
In Flooded New Jersey, No Oversight For Levees There's no state agency that regulates or maintains levees in the Garden State. But the flooding brought by Sandy will inevitably bring calls for more flood-protection systems. 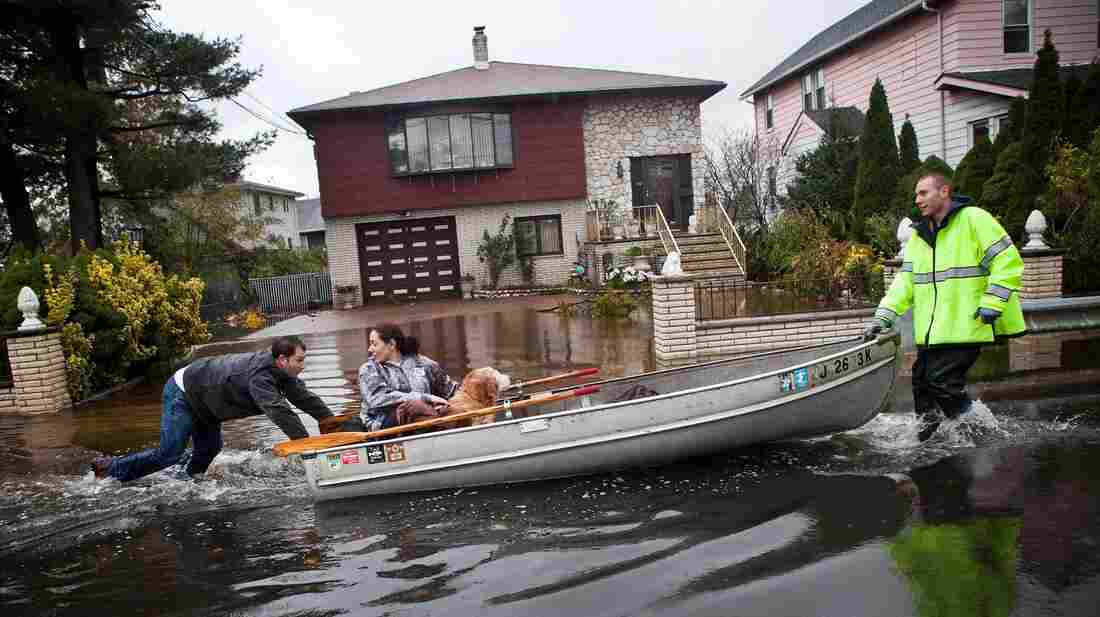 An emergency responder helps residents of Little Ferry, N.J., after their neighborhood was flooded due to Superstorm Sandy. Andrew Burton/Getty Images hide caption

Residents of Moonachie and Little Ferry, N.J., are beginning to clear the damage after their communities were inundated by floodwaters. The flooding occurred when a system of levees and berms was unable to control the storm surge pushed ashore by Superstorm Sandy.

Geologist Jeffrey Mount of the University of California, Davis, isn't surprised. "There really are only two kinds of levees," he says, "those that have failed, and those that will fail."

Perhaps somewhat more surprising is that there is no state agency in New Jersey that regulates or maintains levees. One of the reasons for that lack of oversight is that the levee system has evolved in an ad hoc fashion over a period of centuries.

"The county that I live in, Gloucester County, there's been a levee system in place, I think, from the King George era," Democratic State Senator Steven Sweeney says, referring to the British king during the American Revolution. He says his Southern Jersey county relies on this ancient system of levees along the Delaware River to prevent flooding.

"Back in 1999, Hurricane Floyd I think it was, we were within an inch or two of the whole levee being breached," Sweeney says. "If it breached in this area of the state of New Jersey, it would have cut off [Interstate] 295 and the New Jersey Turnpike."

Those two highways are crucial to commerce in the Northeast, so you might think the federal government would cough up some money to protect them. But Sweeney says it doesn't. "We've been putting our county resources to work, and state resources to work," he says. "But we won't get any federal money unless the thing basically collapses."

And maybe not even then. A report in 2010 found that none of the levees in Gloucester County met standards set by the U.S. Army Corps of Engineers that would qualify them for federal assistance.

Mount doesn't find that surprising. "Most of the levees in the country, when you look at them, don't make it to those basic standards," he says. "The problem is that when we do do levees that meet our very, very minimal federal standards, we tend to think we've solved the problem."

So people blithely build communities that are critically dependent on levees. "When the eventual failure comes, the damages are very, very, very high," says Mount.

The flooding brought by Sandy will inevitably bring calls for more flood-protection systems. David Dzombak, a professor of civil and environmental engineering at Carnegie Mellon University in Pittsburgh, chaired a committee for the National Research Council that evaluated the state of flood management systems in the U.S. He says it's not enough to just build new levees and floodgates to protect communities. "Once you build this hard infrastructure, there has to be a commitment, and hopefully now a commitment upfront, of putting dollars aside to maintaining it forever," he says.

A commitment lasting forever will be very, very expensive. But rebuilding after floods can be even more expensive.