Accessibility links
China's Assertive Behavior Makes Neighbors Wary China's foreign policy has appeared increasingly assertive recently. What isn't clear is whether this is part of a coherent plan or just an outgrowth of China's increasing stature in Asia and beyond. 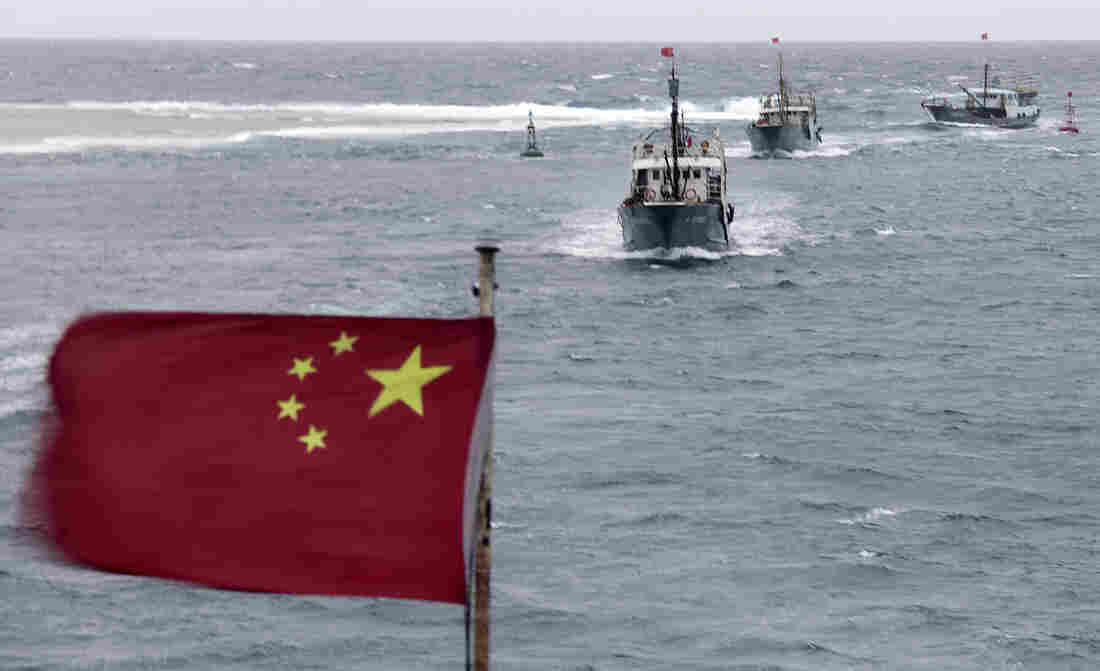 China is currently involved in several disputes with its neighbors over small islands, many of them uninhabited. Here, Chinese fishing boats sail off the island province of Hainan in the South China Sea in July. AP hide caption

As China's global stature grows, Beijing appears to be flexing its muscles more frequently on the international stage. As part of NPR's series on China this week, correspondents Louisa Lim and Frank Langfitt are looking at this evolving foreign policy. From Beijing, Louisa examines the forces driving China's policy, while Frank reports on why China's neighbors are feeling increasingly edgy.

In the past two months, China has brought its first aircraft carrier into the navy, escalated territorial disputes over rocky uninhabited islets far from its shores and permitted tens of thousands of citizens to hold anti-Japanese protests in 180 Chinese cities.

"Some people argue that given growing territorial disputes and mounting strategic pressure from the U.S., then China had better change the posture and get some sort of new foreign policy approach," says Zhu Feng at Peking University's Center for International and Strategic Studies.

Zhu himself is still an advocate of Deng's low-profile approach. But he admits that, given China's increasing international involvement in missions such as anti-piracy patrols off Somalia, this is becoming challenging.

"China now is the 800-pound gorilla. When it walks through the forest, it's totally impossible not to make a big noise," he says. 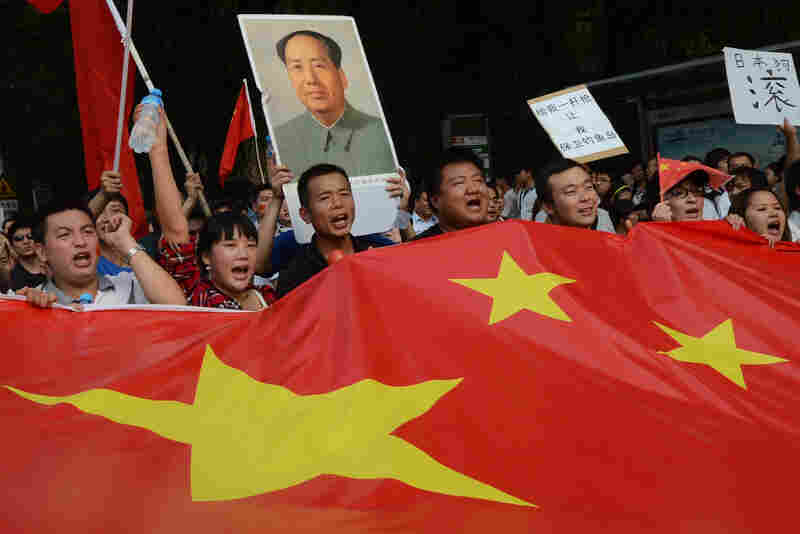 Chinese demonstrators carry their nation's flag during an anti-Japanese protest outside the Japanese Embassy in Beijing on Sept. 15. The countries are involved in a dispute over the Diaoyu Islands, known as the Senkaku Islands in Japanese. Mark Ralston/AFP/Getty Images hide caption 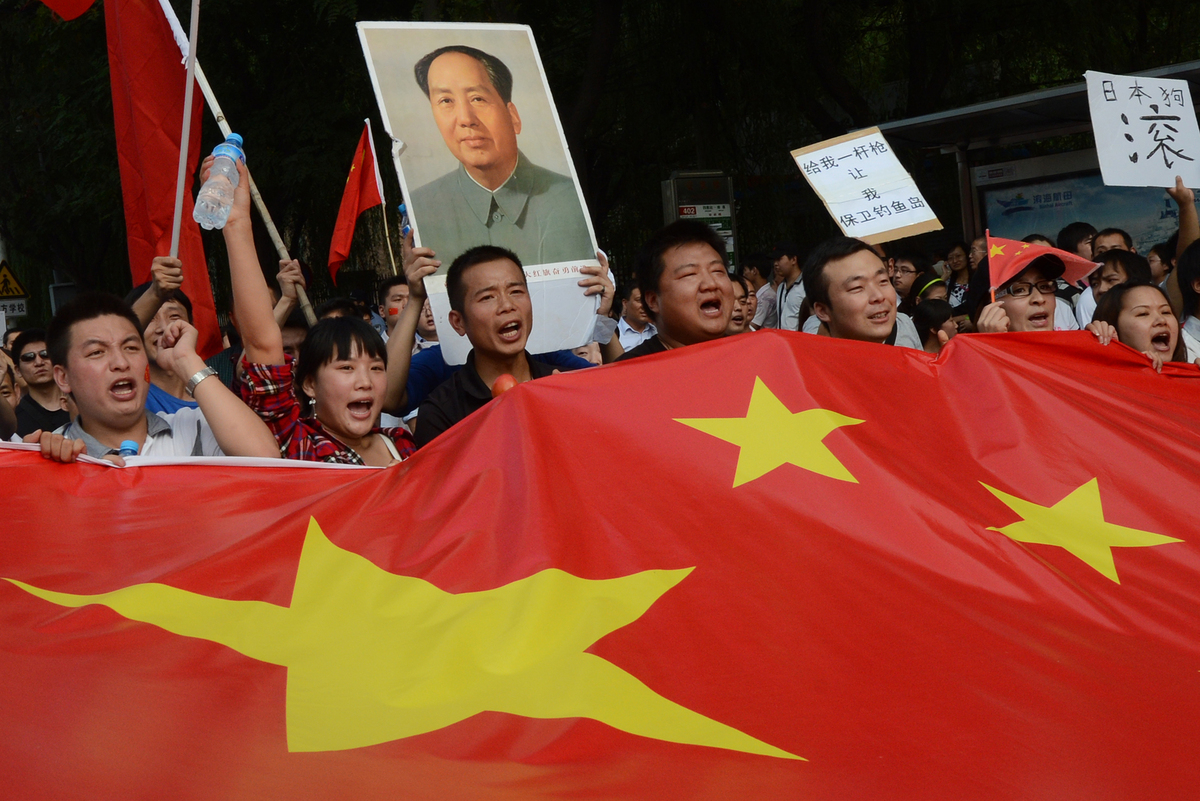 Chinese demonstrators carry their nation's flag during an anti-Japanese protest outside the Japanese Embassy in Beijing on Sept. 15. The countries are involved in a dispute over the Diaoyu Islands, known as the Senkaku Islands in Japanese.

Others argue that China is suffering from a lack of coherent foreign policy.

"The basic reason for this foreign policy vacuum is that China is rising very quickly," says Wang Zheng, an expert on Chinese foreign policy at Seton Hall University in New Jersey. "It's not really ready for playing a role as a global power. That's totally different from being a regional power. You must have a strong foreign policy, and Beijing needs more time to prepare itself."

Foreign policy traditionally ranks low in the power structure, with Foreign Minister Yang Jiechi not even ranked as a member of the 24-strong Politburo. This has implications for policy coordination, allowing local bureaucratic interests to shape the foreign policy agenda on occasion.

"To us it looks like China is a unified actor," says Susan Shirk, a former deputy assistant secretary of state during the Clinton administration, and now at the University of California, San Diego.

But she decries the idea that China is "an authoritarian country, a few guys on top calling the shots, they have this grand strategy of taking over the world, competing with the U.S. to be a global superpower. I really don't think this is the case."

Over the summer, tensions escalated in the South China Sea, where China, the Philippines, Vietnam, Taiwan and Malaysia all have overlapping territorial claims.

Shirk argues that in such disputes, China's position has been determined not by central decision-making but by "puny bureaucratic actors" able to push their own agenda because of a lack of internal coordination.

Speaking of tensions in the South China Sea over a small group of islets known as the Scarborough Shoal by the Philippines and Huangyan Island by China, she says, "This was manufactured, stirred up by agencies like the fishing agency, the marine surveillance people, who wanted to use nationalism to get more power and influence for themselves. China's leaders are not managing their collective leadership particularly well, so they're not able to exercise effective restraint over these bureaucratic interests."

Whether it's anti-Japanese crowds in the street or the unveiling of a new aircraft carrier, China's external shows of force may look like a sign of strength. But they mask a lack of internal coordination, combined with tensions about the direction of its foreign policy. China's long-term use of nationalism is also hemming its leaders in.

"Any international dispute — even a minor confrontation — can become a test of government, because the government's basic legitimacy is based on being a guardian of Chinese national face," says Wang Zheng, the author of Never Forget National Humiliation: Historical Memory in Chinese Politics and Foreign Relations. "So backing down can be seen as weakness or even a new humiliation."

The View From Outside China

In the eyes of China's neighbors, the recent run-ins over disputed islands point to a more aggressive, rising power willing to flex its muscles and impose costs on those who defy it.

Japanese companies have certainly paid a price for the decision by the Japanese government to buy several disputed islands in the East China Sea in September.

Chinese rioters reacted to the purchase by overturning Japanese cars and even beating a fellow Chinese citizen senseless for driving one.

They also boycotted Japanese products, causing big losses for Japan's famed auto companies, which rely on the China market. This week, Honda reduced its full-year, net profit forecast by 20 percent because of a drop in China sales.

The backlash also hit Japan directly as more than 4,000 Chinese canceled vacations to Japan's southern island of Okinawa following warnings from the government in Beijing. 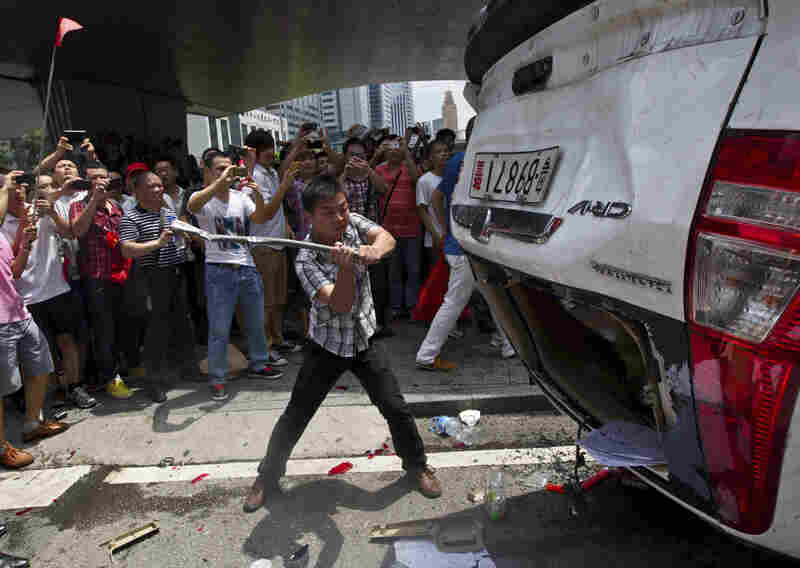 As part of a demonstration against Japan, a Chinese protester destroys a Japanese-model police car in Shenzhen in southern China on Aug. 19. STR/Reuters /Landov hide caption 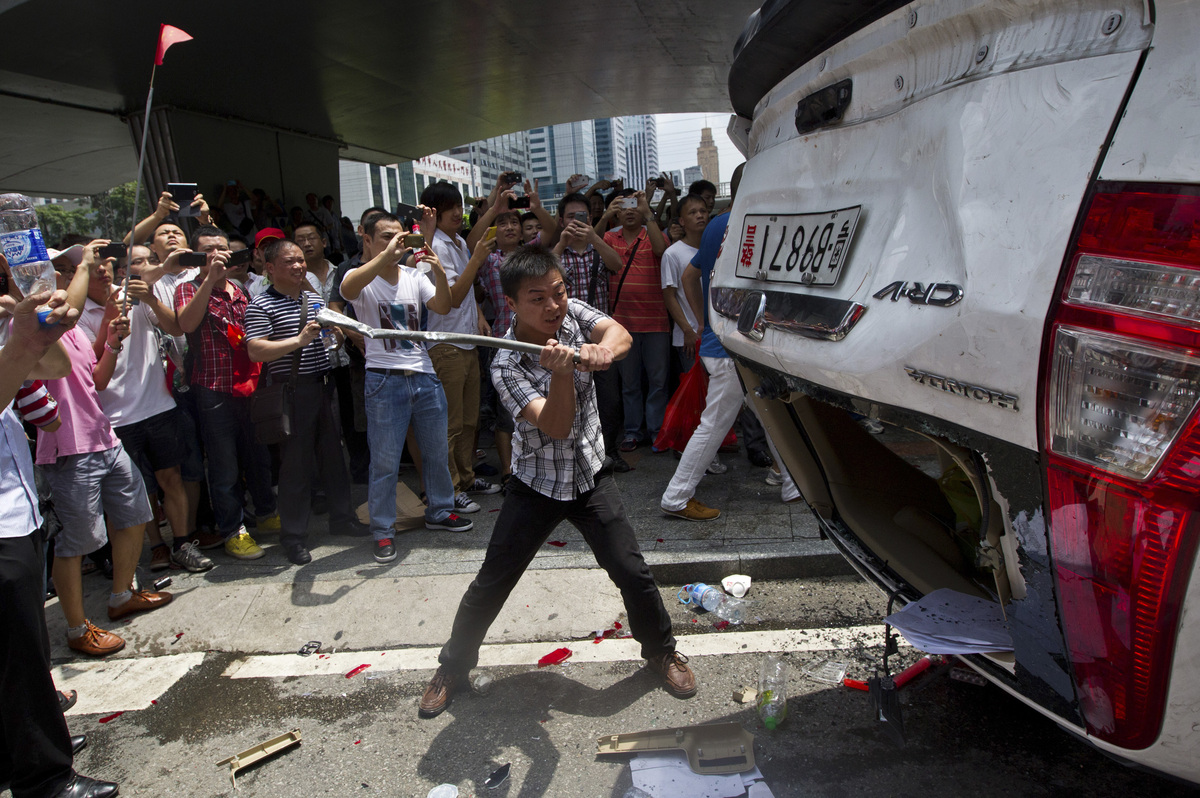 As part of a demonstration against Japan, a Chinese protester destroys a Japanese-model police car in Shenzhen in southern China on Aug. 19.

"The Chinese government said it is not very safe to go to Japan now," recalled Sen Tamaki, who heads overseas marketing for the Okinawa Convention and Visitors Bureau.

He says that warning was totally false, but it took a toll. Tamaki is also worried about long-term damage to Okinawa's economy if relations remain rocky.

"If you want to talk about the future, it's going to be a serious problem," said Tamaki during a chat in Naha, the capital of Okinawa prefecture.

Currently, Okinawa's tourist-dependent economy relies on domestic visitors from other parts of Japan.

"But in Japan, the population is decreasing," says Tamaki, "so the tourism market kind of shrinks in the future. So, China is probably one of the biggest markets to Japan."

China is also a big market for products from other neighbors, including bananas from the Philippines. When the countries faced off last spring over another set of islands in the South China Sea, China imposed stringent health restrictions on Philippine bananas.

Antig says many small growers are now running out of money, while big farmers are traveling to Europe and beyond to find new buyers.

"The lesson is: You should continue to identify new markets, because you never know what can happen," Antig says. 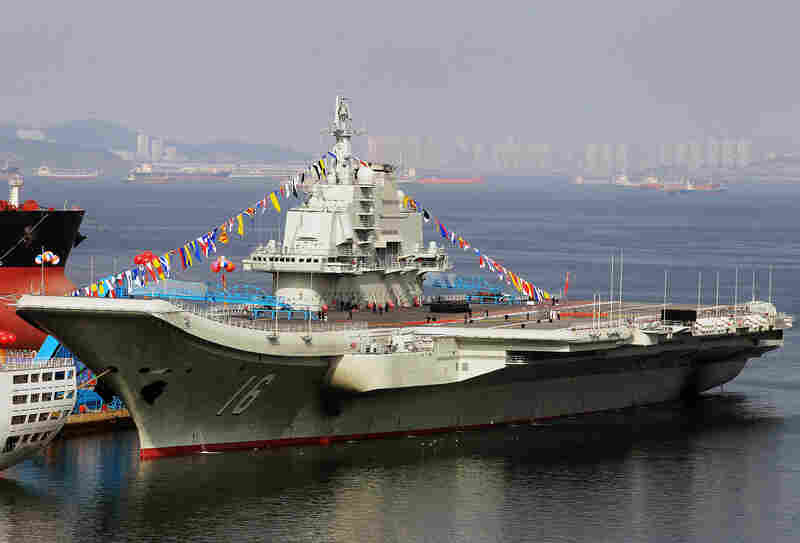 China's first aircraft carrier, shown here in the northeastern port of Dalian, was officially put into service on Sept. 25. The carrier is seen as a symbol of China's growing military might. STR/AFP/Getty Images hide caption 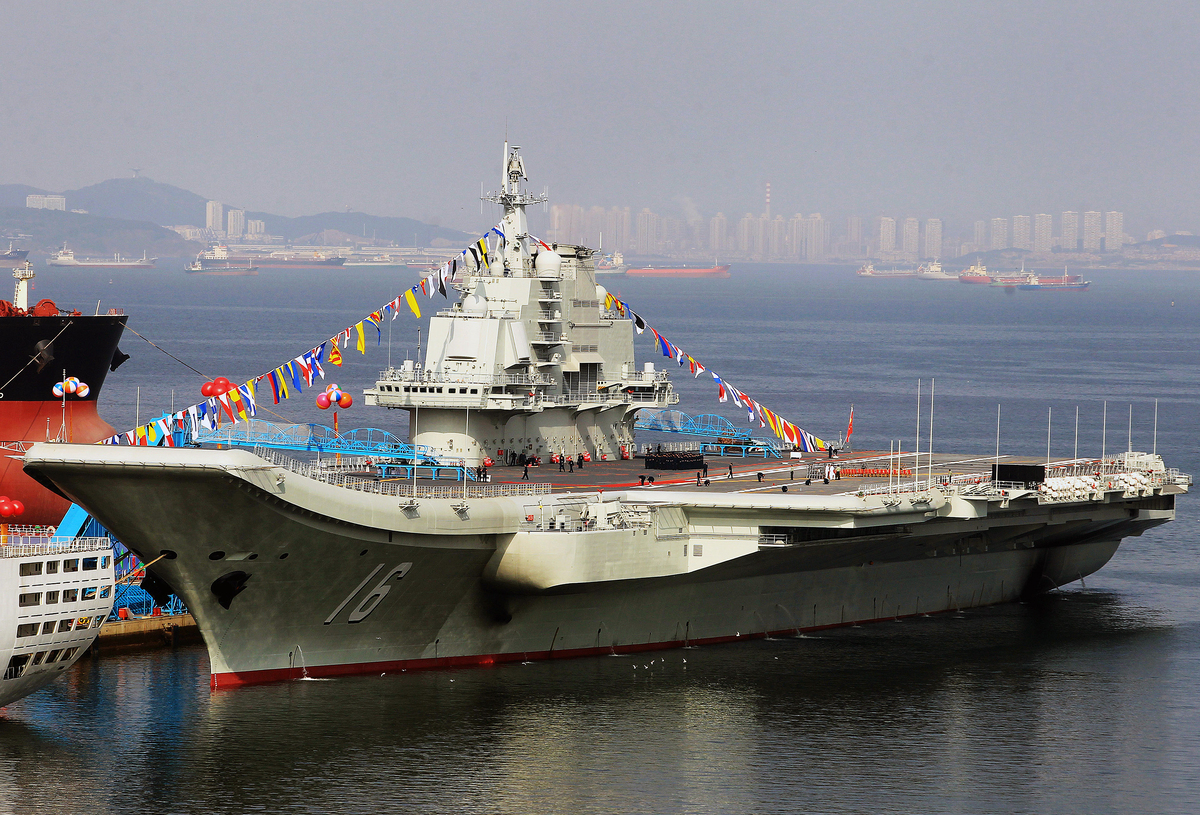 China's first aircraft carrier, shown here in the northeastern port of Dalian, was officially put into service on Sept. 25. The carrier is seen as a symbol of China's growing military might.

As the biggest economy in Asia, China has lots of leverage with its neighbors, but using purchasing power as a club has limits.

Boycotting Japanese cars in China also hurts the Chinese workers who build them. For instance, Honda has cut daily shifts at its two biggest Chinese plants from two to one until at least mid-November.

"That economic weapon is not actually such a smart tool of power as they would like it to be," says Euan Graham, a senior fellow at the S. Rajaratnam School of International Studies in Singapore. "Particularly if we start seeing the economic fallout as China's own economy starts to slow down from slowing investment from Japan and other outside countries."

Huang Jing, who teaches political science at the National University of Singapore, says China's growing assertiveness in the waters off its shores has a sense of inevitability.

"People have to face reality," said Huang in an interview in his office in Singapore. "They know the Chinese are coming. On the other hand, they worry about it."

Huang says as China's economy and military continue to grow, China will demand a bigger say in the region. The U.S. recently pledged to beef up its military profile in Asia, where it has huge economic interests. China sees this as an attempt to contain its rise.

Countries across the region are now hedging their bets and hoping they won't be forced to choose sides.