Accessibility links
How 'Black Beauty' Changed The Way We See Horses In 1877, Anna Sewell wrote a novel about human kindness and cruelty — all from the point of view of a horse. In the decades since, Black Beauty has been embraced by generations of children, and has helped change the way we treat and think about horses. 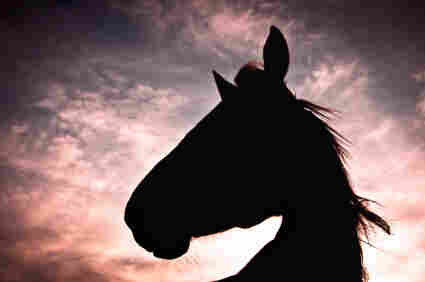 "The best thing that ever happened to horses was that they ceased to be the automobiles and trucks of their day," says author Jane Smiley. "The automobile was invented and horses became pets, companion animals, leisure animals and so in general they became better treated. iStockphoto.com hide caption

NPR's Backseat Book Club is back! And we begin this round of reading adventures with a cherished classic: Black Beauty by Anna Sewell. Generations of children and adults have loved this book. With vivid detail and simple, yet lyrical prose, Black Beauty describes both the cruelty and kindness that an ebony-colored horse experiences through his lifetime — from the open pastures in the English countryside to the cobblestone grit of 19th-century England.

Sewell wanted the reader to see the world from a horse's point of view and so Black Beauty tells his own story in these pages. His wise observations and unvarnished candor reveal much about both human nature and animal suffering. Black Beauty was born at a time when horse power fueled almost everything: wars, agriculture, transportation, construction and factory work. Horses pulled barges. They hauled coal and granite. And they were also seen as a measure of wealth; the way one rode atop a stiffly controlled horse could convey style and stature. All of this meant horses were both exalted and often pushed past the point of exhaustion. 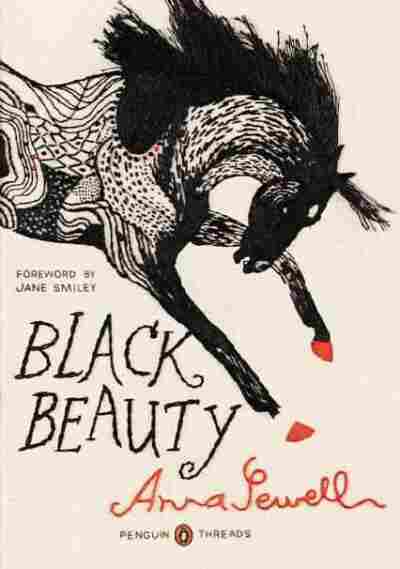 To better understand how Sewell's book became a children's classic and an animal rights manifesto we turned to Pulitzer Prize-winning novelist Jane Smiley, who has written several books about horses herself — her latest is called Pie in the Sky. Smiley also rides and grooms horses and has re-opened the pages of Black Beauty several times in her lifetime. The book, she says, offers different lessons in adulthood than when she first picked it up as a child. But Smiley says the central themes of courage, perseverance and the power of kindness are timeless.

"Black Beauty helped people see animals in a new way," Smiley says. "As soon as you say that an animal has a point of view, then it's very difficult to just go and be cruel to that animal. ... [It showed] readers that the world is full of beings who should not be treated like objects."

Black Beauty, as his name suggests, was prized for his size and strength. But when misfortune comes, he is sold to a series of different owners. Some handlers are kind and show him love and respect. Others are careless or worse — callous. When Black Beauty is rode hard over dark roads by a drunken groom, he stumbles, looses a shoe and injures his legs. Though still beautiful, he is less valuable and ends up in London, pulling a carriage through teeming, dirty streets — a far cry from the green meadows of his youth.

Through his journeys, Black Beauty encounters several equine friends. There's Peggy, who's often whipped because her legs are short and her gait is slow. Ginger is temperamental, but for good reason: She was beaten as a colt. After being badly injured by a cart on the wrong side of the road, Rory dreams of retirement but is instead sent to haul coal.

It's almost impossible for us to understand now that we have motorized vehicles all the things that horses did. ... Anything that had to be moved — no matter how heavy it was — was moved by a horse. ... Society couldn't function without them.

"It's almost impossible for us to understand now that we have motorized vehicles all the things that horses did," Smiley says. "Anything that had to be moved — no matter how heavy it was — was moved by a horse. They just performed every function in society ... and society couldn't function without them."

Many of the stories are hardscrabble. The humans who control the horses are often flawed. But the friendships among the horses glow with courage and dedication. And instead of just painting easy villains and heroes, Sewell takes care to explain the conditions that often lead to cruelty — from the vanity of the rich to the financial hardships for cab drivers to the role that alcohol played in unraveling the humans' lives.

Black Beauty was first published in 1877 and was written in the last years of Sewell's life. Sewell, a Quaker born in Yarmouth, England, followed in the footsteps of her mother, Mary Wright Sewell, who wrote several popular books for children. When it was first published, Black Beauty was not necessarily intended for children. Sewell hoped to send a message to adults who controlled how horses were cared for.

The 'Blue Horse' That Inspired A Children's Book

Due to illness, Sewell was unable to walk easily so she depended on horse-drawn carts to move about for most of her life.

Sewell's decision to write the book as an "animal autobiography" was quite novel in Victorian England, and the little green book with the sad-looking horse on the cover was released to great fanfare. Promoters in the U.S. brought a pirated edition of the book to America hoping it would do for animal rights what Uncle Tom's Cabin had done for slavery. Within two years, 1 million copies of Black Beauty were in circulation in the U.S., and animal rights activists regularly passed copies of the book to horse drivers and stable hands.

Black Beauty is widely credited with helping to change the way horses were cared for. There is little doubt that the book helped hasten the abolishment of the "bearing rein" — a strap used to pull a horse's head in toward its chest to force the appearance of a noticeable arch of the neck. (This was a highly desired look in aristocratic society, but it created great pain and difficulty for the horses. The animals could not use their neck and chest muscles to pull weigh properly or to breathe correctly. The unnatural arch weakened the horses and usually led to respiratory problems.) Black Beauty also placed a harsh spotlight on the practice of "docking" or cutting short a horses tail, largely for the sake of appearances — a practice that is still widely debated.

'The Red Pyramid' By Rick Riordan

One of the things we love best about Black Beauty is that it is a great book for generations to read together. Parents and even grandparents can revisit a book they loved as children to read along with our book club members. We'd love to hear your thoughts about Black Beauty. (Have you ever considered writing an animal or insect biography to explore the world from another point of view?)

We also want to hear your questions about our next book club pick. For November we will be reading a modern-day best-seller, The Red Pyramid by Rick Riordan, whose other books include the Percy Jackson & The Olympians series. Riordan, a former English and history teacher, uses all he learned in the classroom to educate young readers while entertaining them with rip-roaring adventure. In 2011, Riordan received the Children's Choice Book Award for Author of the Year. We can't wait to put your questions to this author to learn more about how he crafts such successful books.