Accessibility links
Lincoln's Screen Legacy, Decidedly Larger Than Life Abraham Lincoln's likeness adorns everything from the penny to a South Dakota mountain. Naturally, such a heroic and tragic American figure has been a subject for the silver screen since its early days. NPR's Bob Mondello surveys some of the most memorable big-screen Lincolns. 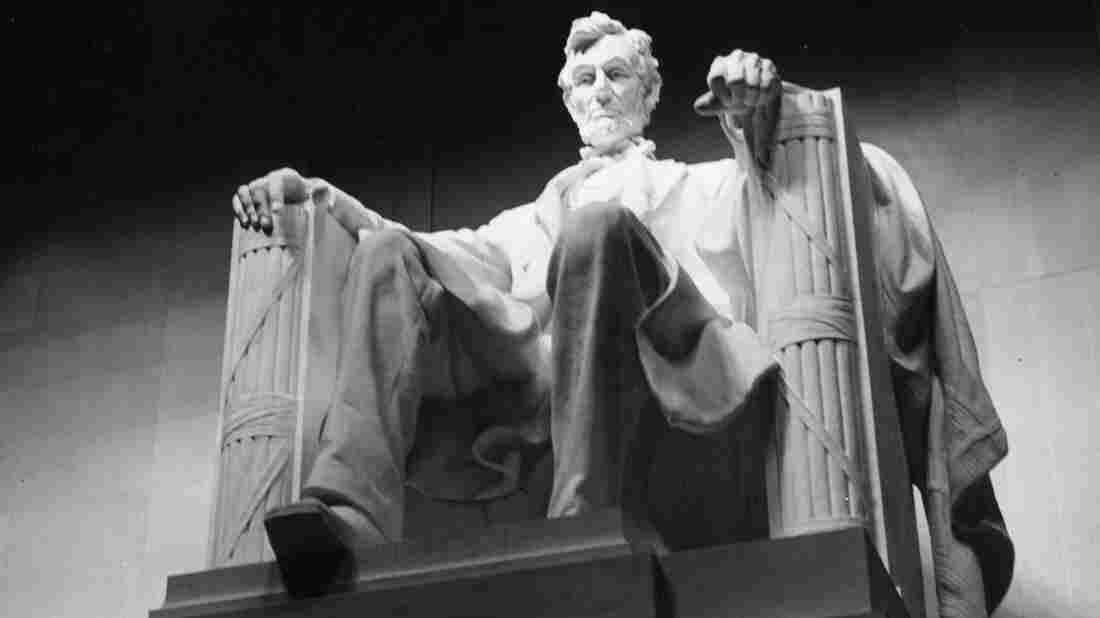 You'd be hard-pressed to find a more omnipresent president than Abraham Lincoln. With his face on the penny, Mount Rushmore and a larger-than-life memorial, he's a fascinating and familiar figure for moviemakers to tell stories about. Terry Chambers/Getty Images hide caption

He's a statue in many a monument, a profile on the penny, a face on the $5 bill, and an animatronic robot at Disneyland. He's even carved into a mountain in South Dakota. So, of course, Abe Lincoln has been a character in the movies — more than 300 of them, in fact.

For a while, playing Honest Abe was enough to make an unknown actor a star, as 24-year-old Ralph Ince discovered in 1911 after appearing in beard and stovepipe hat in The Battle Hymn of the Republic. His performance struck such a chord with audiences that he was drafted to don that costume again and again in other silent films.

That was at a time, remember, when some moviegoers would still have recalled seeing Lincoln in the flesh. Nineteen years later, when talkies gave Honest Abe an on-screen voice for the first time, in the 1930 drama Abraham Lincoln, that would have been less likely — so it's nice that he spoke in the richly oratorical cadences of Walter Huston. 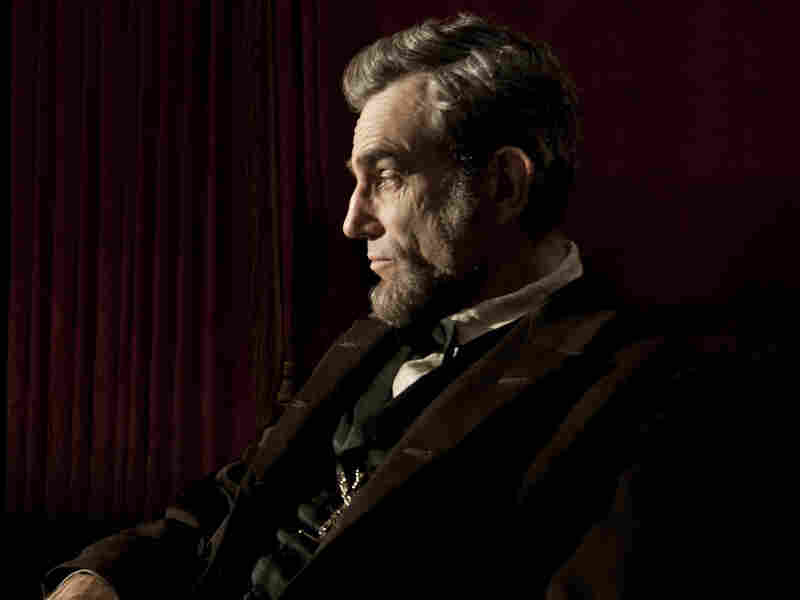 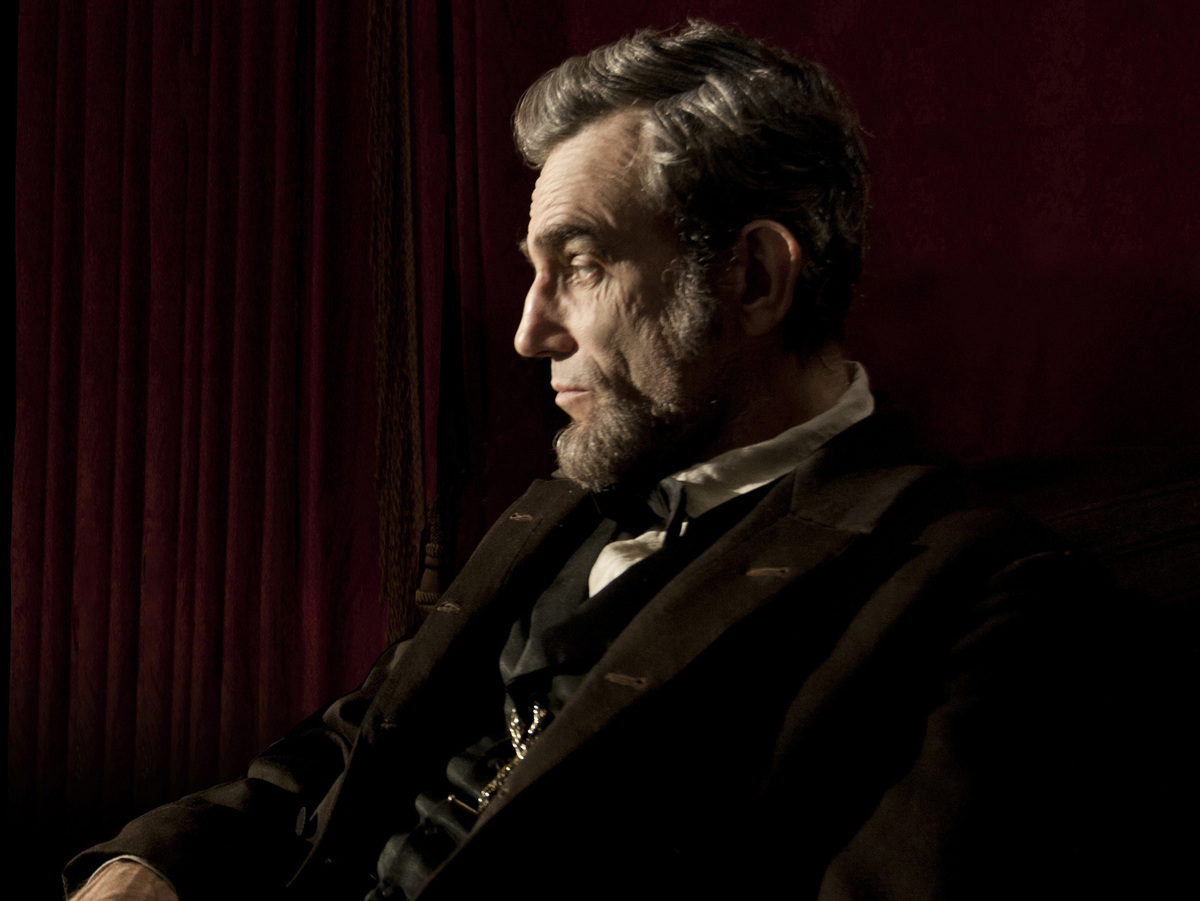 Notable Lincolns that followed included a brash Henry Fonda in Young Mr. Lincoln; a stentorian Raymond Massey in Abe Lincoln in Illinois; an understated Sam Waterston in the TV miniseries Lincoln; the resonant, distinguished Gregory Peck in TV's The Blue and the Gray; and this year's Benjamin Walker, revealing a little-known facet of the Lincoln presidency — its pursuit of the undead — in Abraham Lincoln: Vampire Hunter. 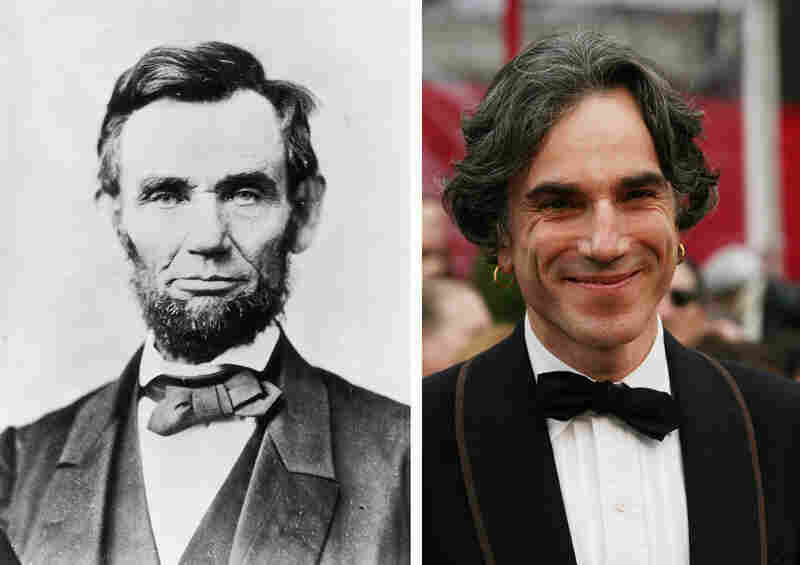 The historical Lincoln, circa 1863, and Day-Lewis at the Academy Awards in 2008. Alexander Gardner/Frazer Harrison/Getty Images hide caption 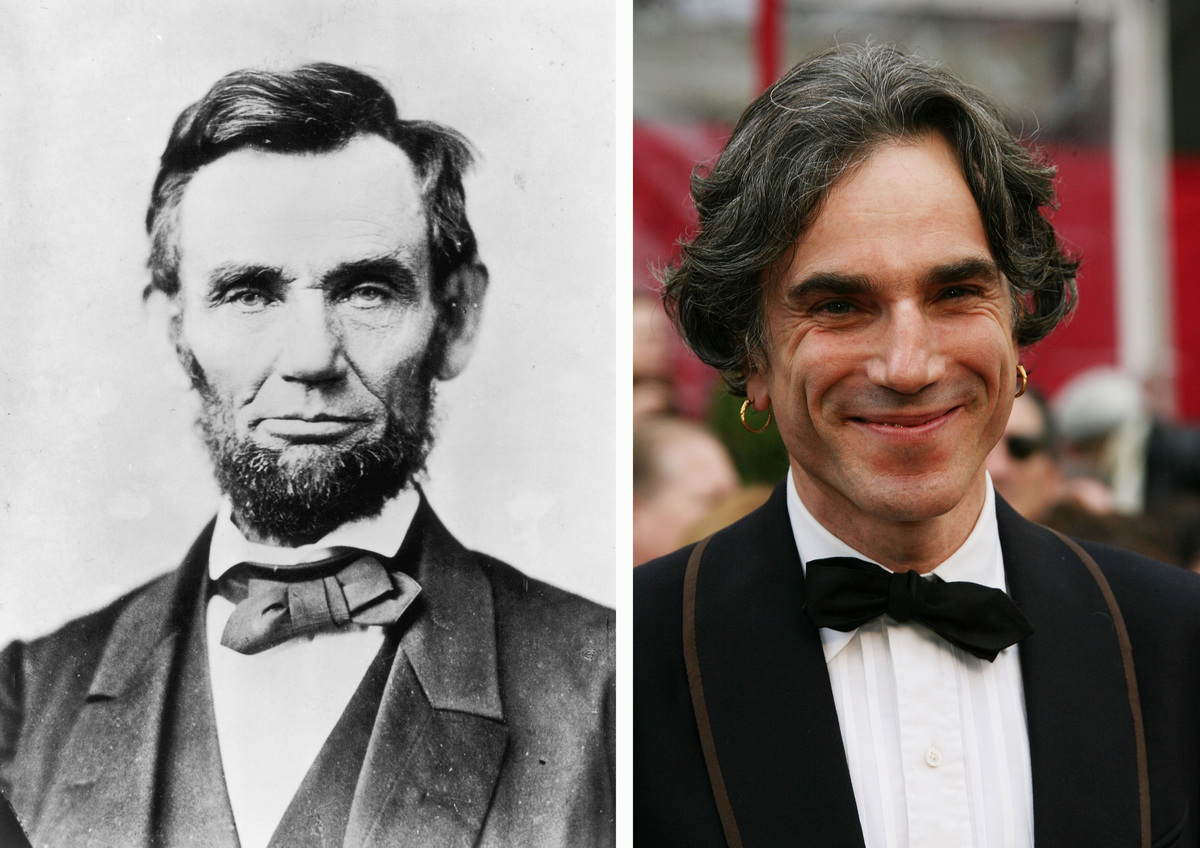 The historical Lincoln, circa 1863, and Day-Lewis at the Academy Awards in 2008.

From Time: 'A Vibrant Past: Colorizing The Archives Of History'

All those actors have reasonably deep voices, so the question arises: Do they sound like the 16th president? We'll never know for sure; Lincoln died 12 years before Thomas Edison invented the phonograph. And we tend to think of this embattled president as a baritone, not least because that suits the weight of the things he said.

But historians say he was more likely a tenor. Folks who heard his speeches wrote that his voice was high, even "shrill." For that reason, Daniel Day Lewis, whose own voice is deep, has elected to raise it a bit in Steven Spielberg's new screen portrait, Lincoln.

The voice he's chosen — or one very like it — is said to have been off-putting to 1850s crowds at the Lincoln-Douglas debates, until the cadence and meaning of his words took hold. That may be why this eloquent president penned his speeches with short sentences and vivid phrasing. He was writing to be heard, not read.

Pulitzer Prize-winning screenwriter Tony Kushner follows that lead when inventing words for him to say.

"We must cure ourselves of slavery. This amendment is that cure," Kushner's Lincoln declares.

More important than the voice, of course, is what's being said, and that, as always with Hollywood, comes filtered through our own time. The film industry always strives to give audiences the Lincoln it thinks they want — and happily, he said enough that they can pick and choose from among his political positions for one that works. 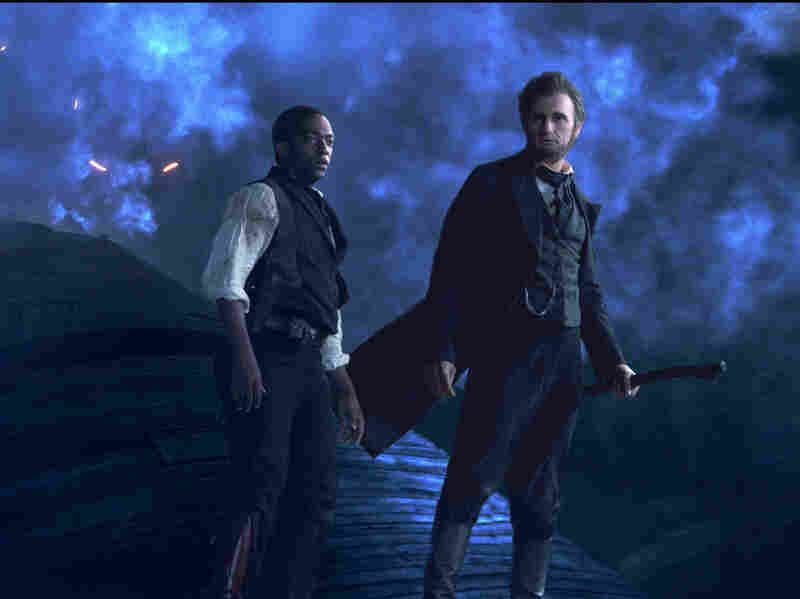 Lincoln's life has been adapted for the screen so often that there's room for the artistic liberties of films like Abraham Lincoln: Vampire Hunter. Twentieth Century Fox hide caption 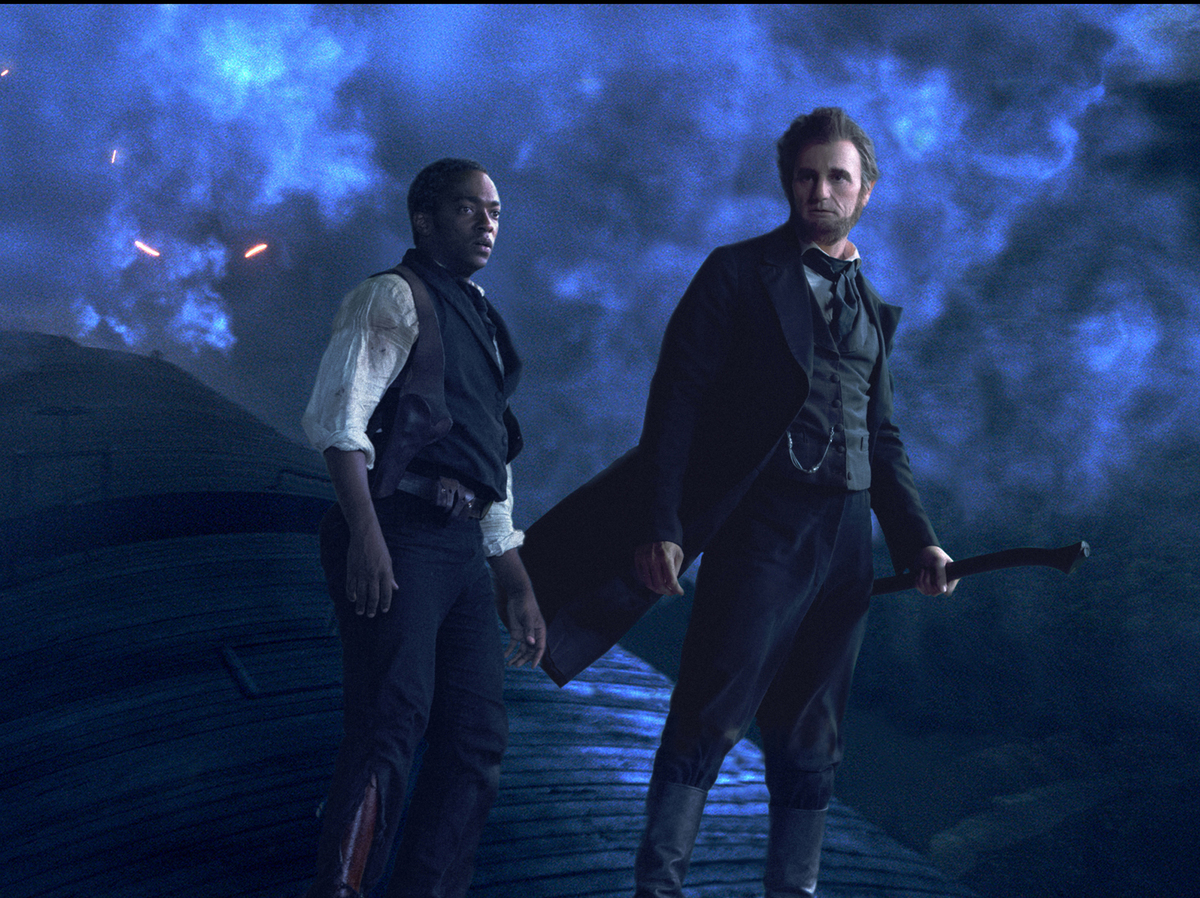 Lincoln's life has been adapted for the screen so often that there's room for the artistic liberties of films like Abraham Lincoln: Vampire Hunter.

In the 1930s, with America clawing its way out of the Great Depression, Fonda's Rail Splitter ran for office at least partly to protect American jobs, saying things like, "I'm in favor of a national bank, an internal improvement system, and high protective tariffs."

In the 1940s, Massey's Lincoln was speaking more to a public that was increasingly uncomfortable standing idly by as Europe was engulfed in World War II. In talking of tolerance for the institution of slavery, he uses language that could as easily be applied to isolationists just before America's entry into the war: "This is the complacent policy of indifference to evil," Massey's Lincoln laments, "and that policy, I cannot but hate."

Later Lincolns have also been products of their times. In the 1980s, with a popular Republican named Reagan in the White House, TV was broadcasting traditional portraits of the Great Emancipator, while the movies came up with a time-traveling Lincoln joining Bill and Ted on an Excellent Adventure that was more in step with the younger generation.

Twenty-three years later, Spielberg and Kushner are taking a decidedly different tack — one that sticks pretty close to the historical record. Their new Lincoln depicts an embattled president, who in a time of turmoil, must fight and fight to get things through a recalcitrant Congress. And how attuned to our times is that?

From Time Magazine: 'A Vibrant Past: Colorizing The Archives Of History'