Accessibility links
Hard-Hit Long Island Awaits Power As Temperatures Drop About a third of the roughly 1 million without power in New York live on Long Island. With temperatures falling, residents are desperate to get back in their homes. Officials, however, say powering up homes is a challenge because of electrical fire risks that could make a bad situation worse. 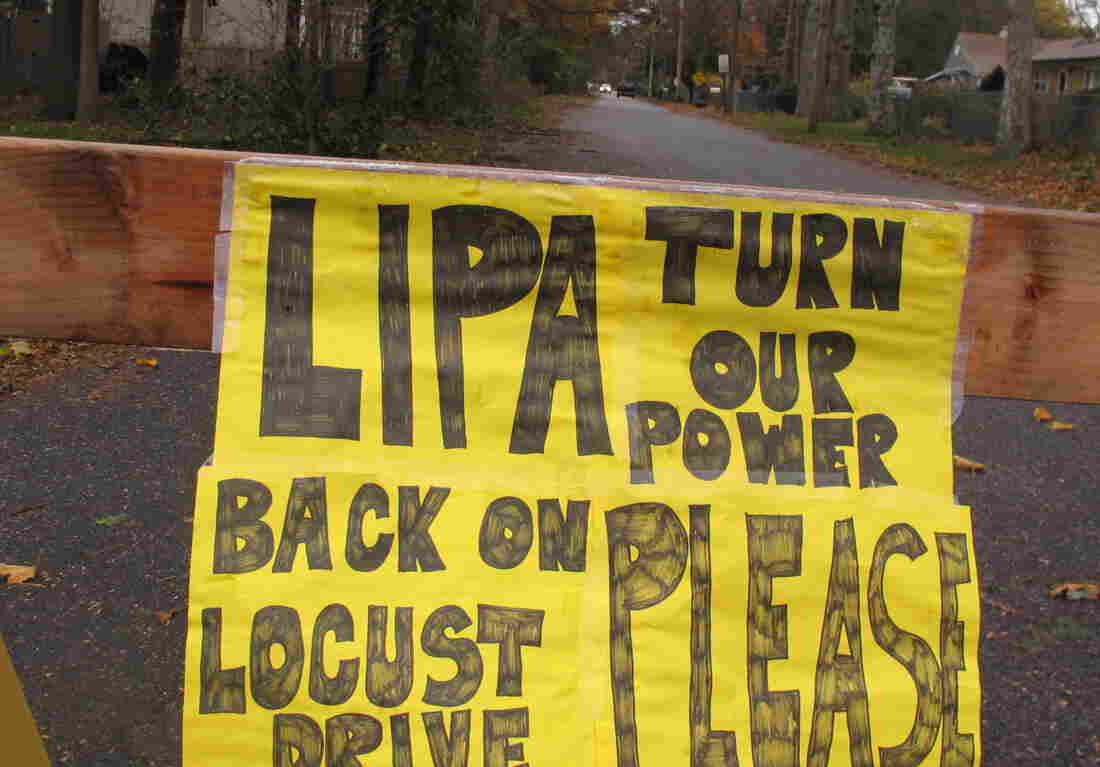 A plea to the Long Island Power Authority for electricity to be restored is posted on a barrier last Wednesday in Mastic Beach, N.Y. The south shore Long Island community was among the hardest hit by the storm that pounded the Northeast. Frank Eltman/AP hide caption

A week after Hurricane Sandy hit the region, roughly 1 million people are still without power in the New York area, and more than one-third of those live on Long Island.

In the hierarchy of hurricanes that have hit Mastic Beach, N.Y., over the years, this one ranks near the top, says Mayor Bill Biondi. 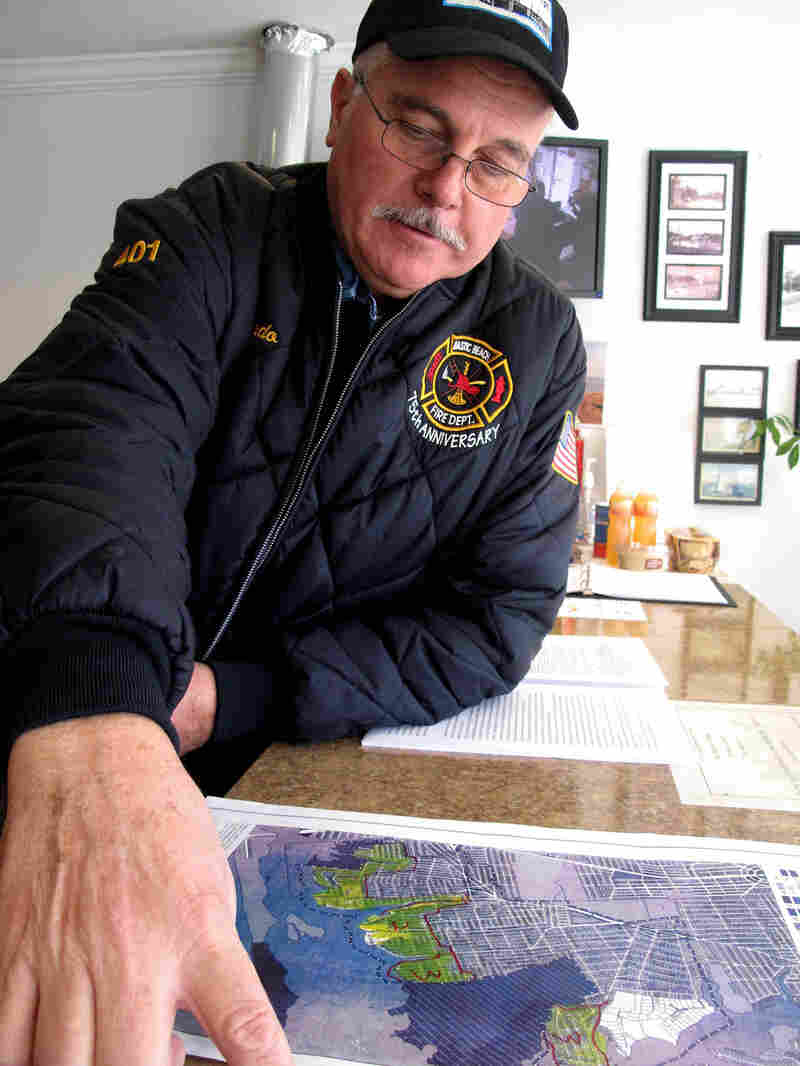 Mastic Beach Mayor Bill Biondi looks over a map of the flooding in his community from Hurricane Sandy. More than 1,000 homes here were inundated with seawater. Steve Henn/NPR hide caption 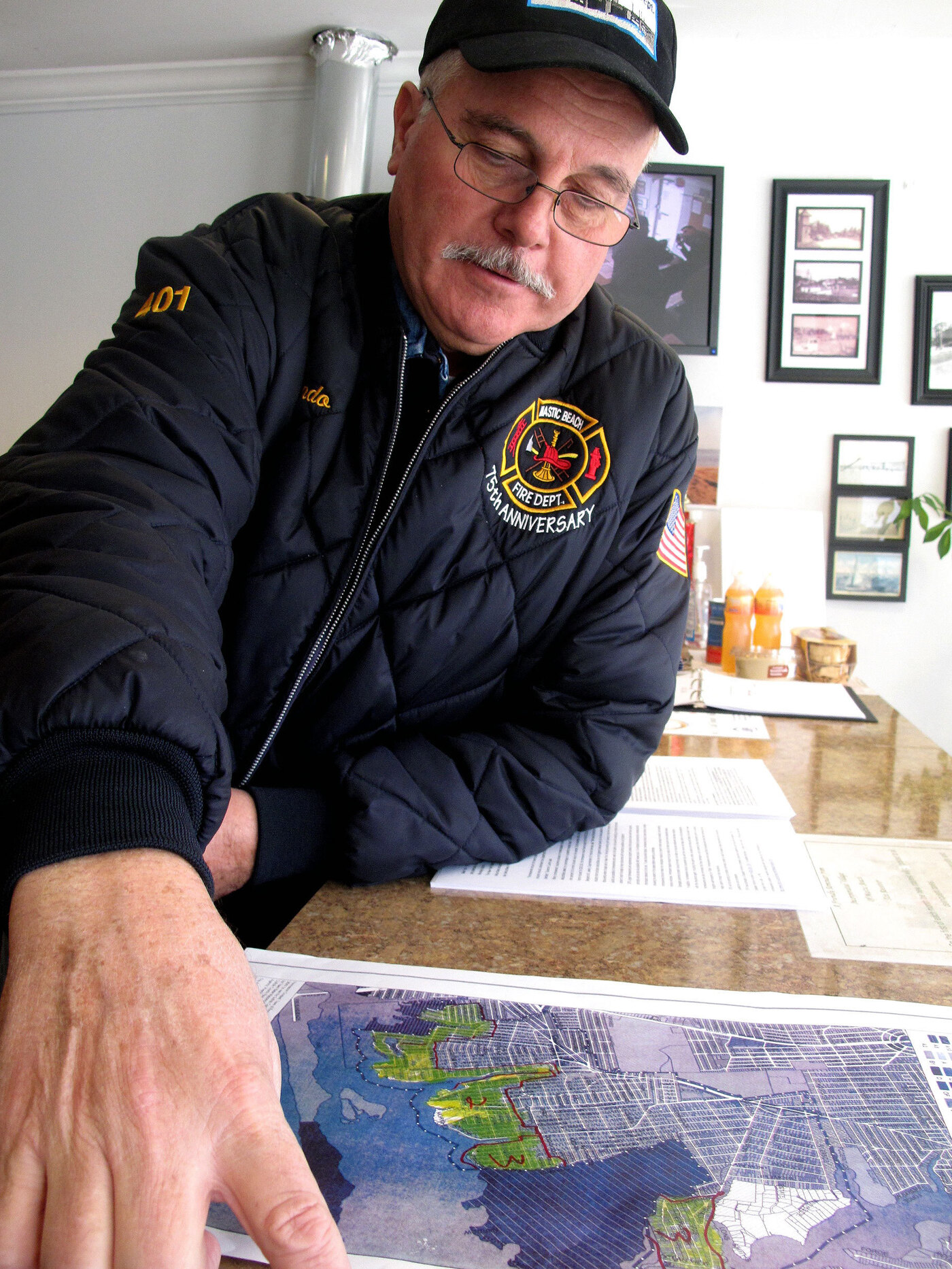 Mastic Beach Mayor Bill Biondi looks over a map of the flooding in his community from Hurricane Sandy. More than 1,000 homes here were inundated with seawater.

Temperatures are now dropping, but restoring power to these neighborhoods is a challenge. Biondi says the seawater that flooded homes here has corroded wires, creating countless fire hazards. A picture on his cellphone shows scorched siding on a house nearby.

"[So] that's pretty much what could happen," he says. "An electrical box — it starts to crackle, and the next thing you know is the house goes on fire."

Biondi says all the residents here want the power back on, but if the town moves too fast and hooks up houses like this, it could make things worse.

At the town hall Monday morning, townspeople pour in pleading for power.

"It's bedlam," says Ann Smith, the town receptionist. "People want their electricity ... everybody expects us to concentrate just on them, and there are an awful lot of people down here who are very bad off. They've lost their homes; they have lost everything."

Now the area is bracing for another storm; a nor'easter that is expected to hit this town on Wednesday.

"Right now we do have teams of assessors out there trying to go home to home," says Deputy Mayor Gary Stiriz. "[They're] trying to get an accurate assessment of what homes can be lived in and what homes are uninhabitable at this point."

Stiriz says there are about 5,000 homes here, and authorities say more than 1,000 are flooded. The storm surge crashed through the barrier beaches on Fire Island that usually protect this little town. It cut a new inlet that is 3,000 feet wide and brought more than 4 feet of water flooding into some neighborhoods.

When floodwaters drained away, they left a mix of fuel oil and sewage behind, and the insides of many homes are now highly toxic.

Stiriz spent his life building a business on the Great South Bay — a marina — that suffered hundreds of thousands of dollars in damage when most of it washed away this week. On top of that, his roof blew off and his home was destroyed.

"All of the things you acquire when you have wood shops and motor shops and metal shops, [all gone]," Stiriz says.

Stiriz is a native, and his family has been here since the 1920s. His own father rode out the 1938 hurricane and tidal wave. All his life his father told him to be careful, because anything you invest in on the waterfront is "eventually going to become hurricane food."