Accessibility links
Can Dumping Iron Into The Sea Fight Climate Change? Climate and ocean scientists are questioning a "rogue" experiment off the Canadian coast. A native village dumped hundreds of tons of iron into the water to cause a bloom of plankton, which would then capture greenhouse gases. 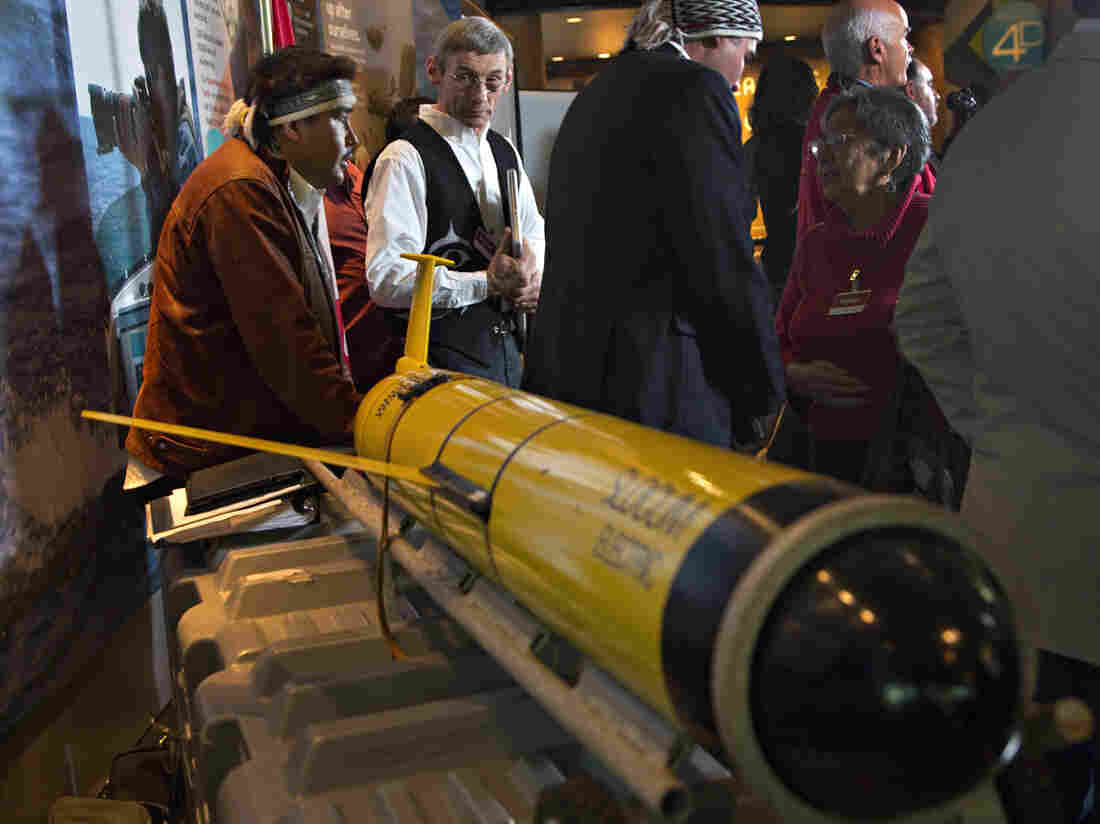 Environmental officials in Canada are investigating what some have called a "rogue climate change experiment." Over the summer, a native village on the coast of British Columbia dumped more than 100 tons of iron sulfate into the ocean. The idea was to cause a bloom of plankton, which would then capture greenhouse gases.

That's the theory, anyway. The reality is a bit more complicated.

The iron dumping was initiated by an organization called the Haida Salmon Restoration Corp., a company set up by the tiny village of Old Massett. Ever since the news broke, the corporation has been on the defensive.

"This project was not entered into lightly," said the company's president, John Disney, at a Vancouver news conference. "When we added iron into the ocean, there was an almost immediate observable impact on marine life, such as whales and other sea mammals, sea birds, pelagic fish. And this could all be observed immediately from the research vessel."

Their primary goal is salmon. The native Haida people have been hit hard in recent years by dwindling salmon runs. But Disney said the village is also looking to make some money if it can show that the iron-fed plankton are capturing greenhouse gases.

"At the end of the day, if you sequester 1 ton of carbon out of the atmosphere and your methodology is sound, and you get that certified and documented, then you have a salable product," Disney said.

But it's not that simple, says Edward Parson, a specialist in climate change laws at the UCLA School of Law.

"There's no system in operation at present that would have granted carbon credits for this project," Parson says.

Carbon credit markets like the one in Europe let companies pay for others to offset their pollution. But this technique, called "ocean iron fertilization," simply isn't recognized by those markets, and the credits aren't really worth anything.

An iron-fed plankton bloom would consume carbon. The question is: What happens next?

"Not all of the effects of ocean iron fertilization are desirable. For example, in addition to possibly reducing oxygen concentration, it also acidifies the ocean," says Andrew McDonnell, who specializes in chemical oceanography at the University of Alaska, Fairbanks.

Not that scientists worry about lasting damage from this particular project. Even 100 tons of iron sulfate is still just a drop in the Pacific Ocean. The real danger, say many climate change experts, is a toxic reaction of the political kind.

"It raises the risk of a sudden backlash," Parson says.

Parson suspects — but can't prove — that the scandal over this experiment was fanned by nongovernmental organizations that oppose research into climate engineering.

"A legal response that says, 'Oh, my god, this cowboy is messing with the environment here, and who knows what could happen, and we have to stop this right now' — that puts in place a prohibition, certainly a prohibition that extends to research — would do more harm than good," Parson says.

He says if society doesn't succeed in cutting greenhouse gas emissions, we may eventually be forced to try some form of climate engineering, which is why he thinks it's important to keep studying those techniques now.