Accessibility links
Always A Rose: Elliott Carter Remembered Carter lived one of the most fulfilled lives any artist could wish for. What's sad about his death Monday at 103 isn't just that a whole era in music has come to an end, but that Carter was still composing, and on the highest level. 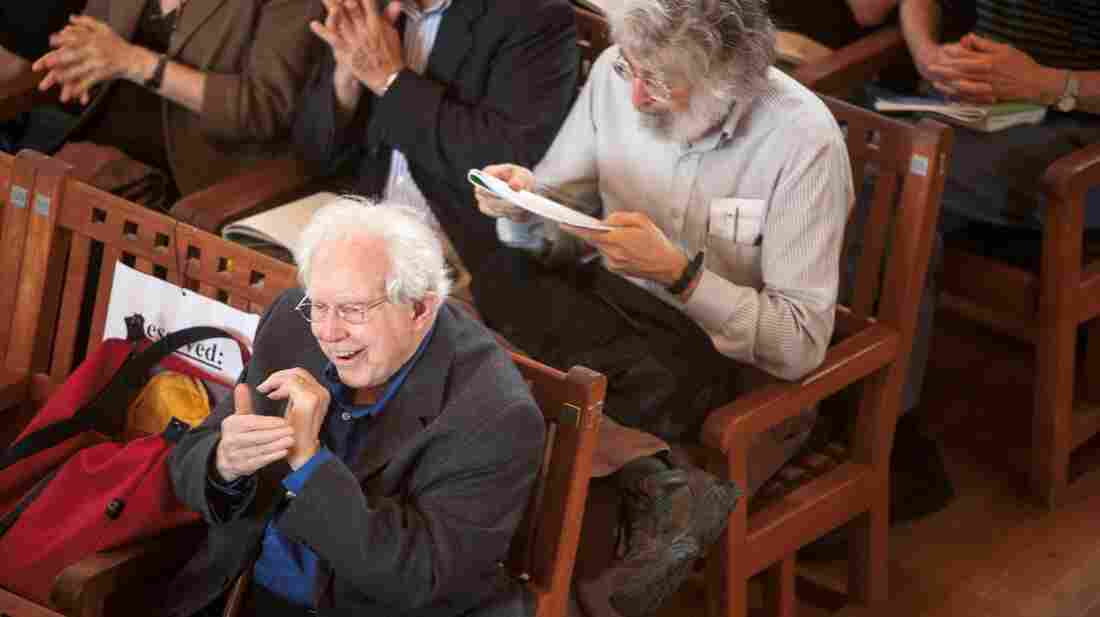 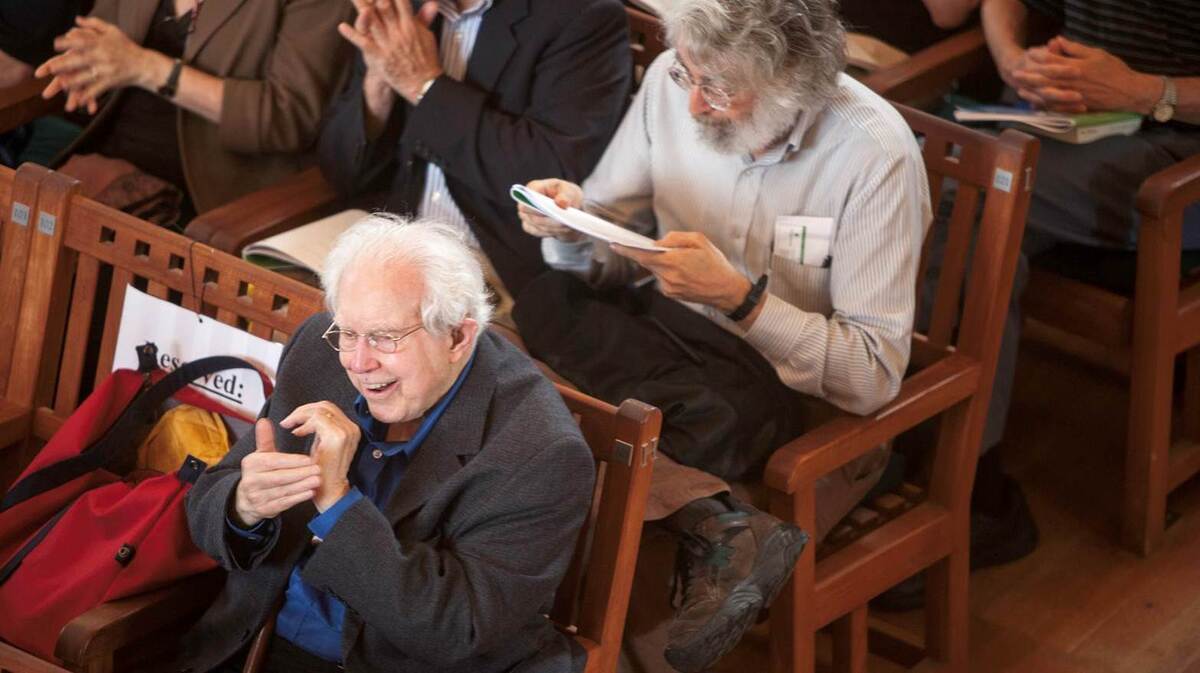 Elliott Carter at Tanglewood in 2008 on the occasion of his 100th birthday. Classical music critic Lloyd Schwartz is sitting right behind Carter.

When Elliott Carter died at home on Monday, he was 103 and had been writing music for more than 80 years. He won Pulitzer Prizes for two of his five string quartets, was a recipient of the National Medal of Honor, and in September was awarded the title of Commander of the French Legion of Honor. Many regarded him not only as our greatest living composer, but also as perhaps the greatest American composer of classical music. He lived one of the most fulfilled lives any artist could wish for. What's sad about his death isn't only that a whole era in music has come to an end, but that Carter was still composing, and on the highest level.

I first met Carter in 1977. He was a tough person to interview, because he had no patience for predictable questions. He liked praise, but only if it was genuine. I think he knew that mine was, and he was very kind to me over the years. I visited with him a couple months ago, and when I arrived at his apartment, he was at his desk working on a new piece called Epigrams, in 12 short parts. He talked animatedly about a new song cycle that excited him, based on the poems of Sappho. His compositions may have been getting shorter, but he wasn't slowing down.

Carter was someone whose vital new ideas, especially about time and rhythm, changed 20th-century music. He based the dreamlike, overlapping time structure of his landmark First String Quartet, from 1950, on an early avant-garde film by Jean Cocteau. This quartet was a 45-minute image of the American landscape and humanity's place within it. I think the slow movement is one of the most sublime and intimate pieces of music ever written.

Carter was nothing if not ambitious, though he never lost his humility or sense of humor about himself. He composed vast symphonies and tiny musical morsels, sonatas, concertos and chamber pieces of an astonishing variety. Many of them end with a quiet little Buster Keaton-like shrug. He wrote only one opera, when he was turning 90 — at the time, we thought this would be considered one of his late works. But since the 1940s, when Carter developed a technique he called "metrical modulation," almost everything he wrote had a dramatic — an operatic — element. The most democratic of composers, he treated every instrument as an individual, having a conversation or arguing with or making love to other instruments. Sometimes all the instruments are, like characters in Robert Altman movies, talking at once. It's one reason some of his music is hard to follow, but always lively.

Carter was also one of the most literate composers. He had been an English major at Harvard, and from the very beginning of his career, he devoted himself to setting poetry, mainly American poetry. His Symphony of Three Orchestras was inspired by Hart Crane's The Bridge. Back in the late 1930s and early '40s, he was making enchantingly tuneful, even hummable settings of Emily Dickinson, Walt Whitman and Robert Frost. In the mid-'70s, he returned to writing for the voice, setting poems by Elizabeth Bishop, Robert Lowell, John Ashbery and, more recently and most movingly, Wallace Stevens, Ezra Pound and Marianne Moore. These settings are knottier, more complex, more interior and "psychological" than the prettier early pieces. Yet there's always some memorably melodic element in everything he wrote, which is one reason I love his music.

One of my favorite of his early pieces — a piece I know he still liked 70 years later — is his setting of Robert Frost's charming little poem, "The Rose Family."

The rose is a rose,
And was always a rose.
But the theory now goes
That the apple's a rose,
And the pear is, and so's
The plum, I suppose.
The dear only knows
What will next prove a rose.
You, of course, are a rose --
But were always a rose.

Elliott Carter was, of course, a rose, and was always a rose.