Accessibility links
Elated Kenyans Revel In Obama Win Kenyans celebrated nationwide as the U.S. election results rolled in Wednesday morning, Kenyan time. President Obama's father was Kenyan, and many in the East African nation consider the president one of their own. 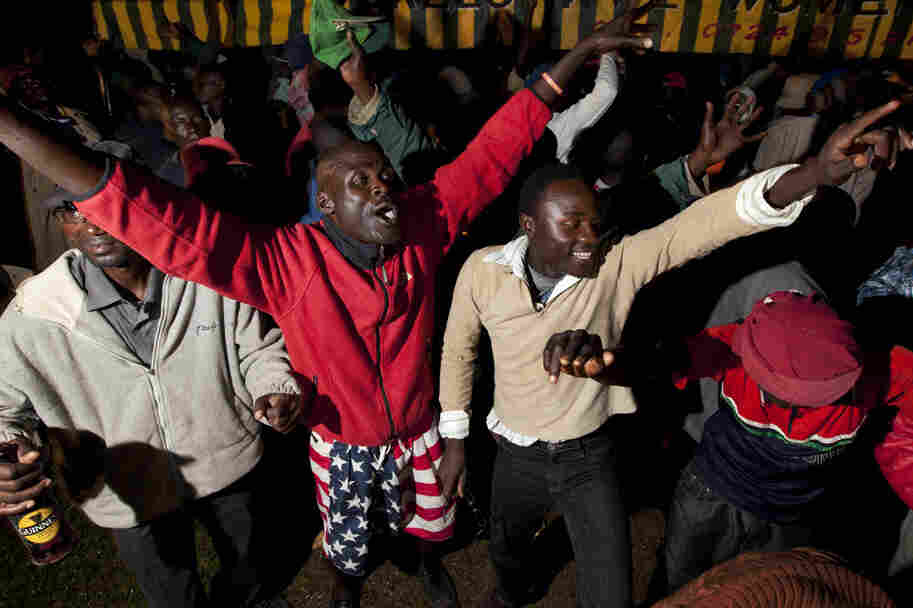 Kenyans dance at a watch party for the U.S. presidential election in Kogelo village, home to President Obama's step-grandmother. Kenyans were elated by the president's re-election. Ben Curtis/AP hide caption 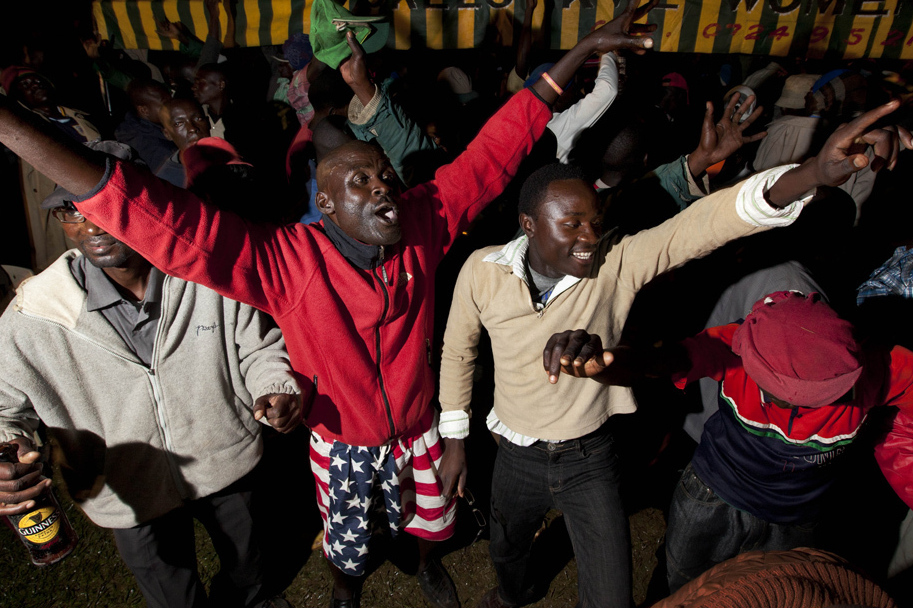 Kenyans dance at a watch party for the U.S. presidential election in Kogelo village, home to President Obama's step-grandmother. Kenyans were elated by the president's re-election.

As the news spread that the son of the late Barack Obama Sr. — a Kenyan government economist — had held on to the most powerful presidency in the world, the elation across this East African nation was contagious.

High Hopes For A Long-Expected Visit

Though the White House has made no promises, many Kenyans are firmly convinced that in his second term, President Obama will pay a visit to the land of his paternal relatives. He came no closer than Ghana and Egypt in his first four years, but "next year, he'll be right here with Air Force One," predicted one excited radio caller.

Yeah, he's not a Kenyan, but he's Kenyan by nature.

The mood was ebullient at a big election-watch party held at the U.S. ambassador's residence in a tropical Nairobi suburb. Mang'u High School had sent a group of students to the gathering so they could watch American democracy in action.

"We are very happy and proud for his success," said Jane Muridi, Mang'u's dean of studies. "We feel great, and we have seen the way the Americans have voted."

Muridi says she was impressed by how quickly and peacefully the U.S. votes were counted. She hopes that Kenya's own presidential election, set for March of next year, can emulate the smooth process.

That would be a welcome change after the country's 2007 contested election, when disgruntled Kenyans divided by tribe and brutally killed more than 1,000 of their fellow citizens. The eyes of the world will be on Kenya next spring to see whether it can have a bloodless transition of power.

Born in Hawaii, Barack Obama is American, not Kenyan. But in this country, with its enduring traditions of tribe and clan, he is resolutely claimed as one of their own. His father's family belongs to the Luo tribe, which hails from a western province bordering Lake Victoria.

Steve Njuguna, 16, a junior at Mang'u High School, says President Obama is a role model for him and all of his friends.

If The World Picked U.S. President, Election Would Be A Blowout

"Because they see it as an opportunity, if a Kenyan is able to go to U.S. and become president," Njuguna says. "They see it as something which is revolutionary, that Kenyans are able to conquer the world."

When reminded that the American president is not Kenyan, Njuguna is undeterred. "Yeah, he's not a Kenyan, but he's Kenyan by nature," he says.

In the newsroom of Nairobi's Daily Nation newspaper, columnist Jack Otieno says that Obama has become so respected in four years that his popularity compares to that of former South African President Nelson Mandela.

"Obama is a young Mandela," Otieno says. "A lot of young people identify with the message of hope. He's restored the dignity of the black man, of the African, of the Kenyan."

In fact, says Otieno, the American president is one of the few political figures who unite all of Kenya's fractious tribes.