Accessibility links
Movie Interview: Sam Mendes On 'Skyfall' Director Sam Mendes won critical acclaim and an Oscar for his first feature film, American Beauty. Now, he is taking on one of the most iconic cinematic franchises in the new James Bond film, Skyfall. He speaks with Renee Montagne about the experience. 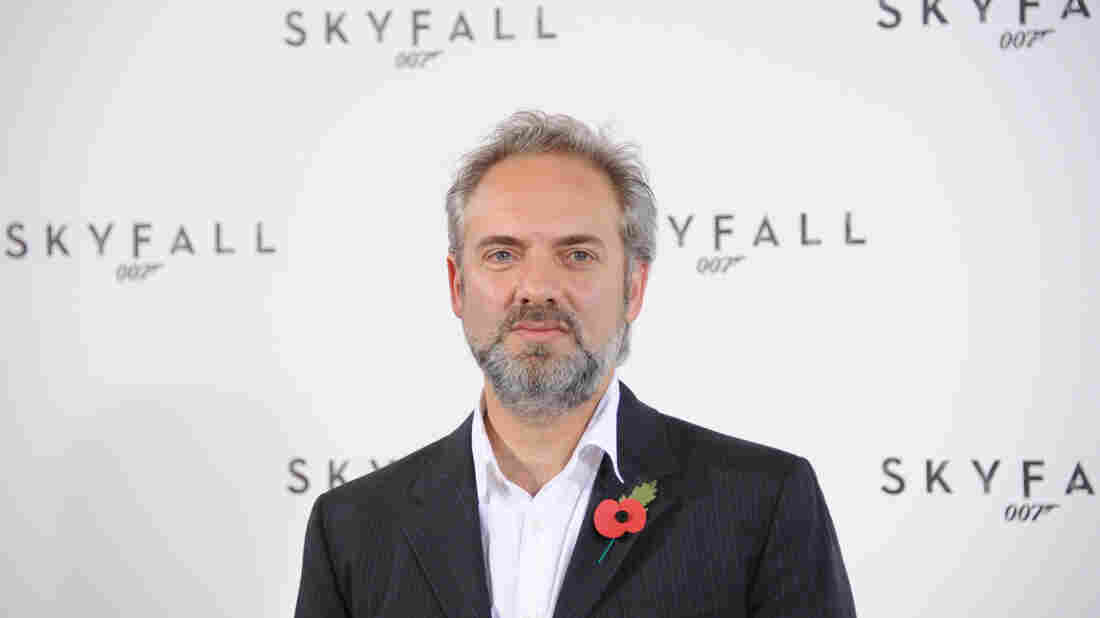 A new James Bond movie opens this week, 50 years after the first film, Dr. No.

The latest installment, Skyfall, finds Daniel Craig once again in 007's perfectly tailored suit. And this time, Bond is battling both the bad guys and his own mortality.

Skyfall is directed by an English theater veteran, albeit a young one. Sam Mendes was a boy wonder of that scene in the late '80s, directing Judi Dench in The Cherry Orchard when he was just 24. He staged a much-acclaimed revival of Cabaret, first in London and then on Broadway. And his first feature film, American Beauty, won him a Best Director Oscar.

It was on his second movie, Road to Perdition, that Mendes met Craig. They'd meet up again just a few years later at a party and start discussing James Bond. The director explains to NPR's Renee Montagne how that conversation would lead him to the world of the MI6 agent — and how he made the experience his own.

On how he came to direct the film

"[Daniel Craig and I] both had a couple of drinks, and I asked him ... when he was doing the new Bond movie. And he said, 'I don't know.' And I said, 'And who's going to direct it?' And he said, 'I don't know. Why don't you do it?' And I can honestly say that I hadn't any strategy. I hadn't any particular agenda in asking him. I was just making small talk, literally. But it never occurred to me until he said it. I think Daniel sobered up the next day, realized that he'd offered me the job, and it wasn't really his position to do that. So he called the producers, and two weeks later I met them. And they were very, very collaborative and very open. It was very clear from the beginning what they wanted was not a Bond movie, but my Bond movie. And so I felt very comfortable from that moment on, really."

On taking on the Bond franchise

"Well the main trepidation was that I would not make a movie that was personal to me in some way. And then I had to make a decision of whether to go back and look at all the Bond movies, or to sort of not look at them — to remember the ones that I remembered and forget the others and maybe go back to the books, which I did.

"I chose the latter course, which was to not think about it too much as a Bond movie, but as a movie. And there was something else as well, which was that I wanted to kind of get back in touch with my 12-year-old self, [who] had sat down and watched Live and Let Die with Roger Moore in, whatever it was, the mid-'70s, which was my first Bond experience, and remember some of that excitement."

On first experiencing the Bond mystique

"There's a great — with the significant risk of sounding a bit pretentious — there's a great Camus quote, in which he says something like, I may paraphrase, but, 'A man's work is nothing more or less than the slow trek to rediscover, through the detours of art, those two or three great and simple images in the presence of which his heart first opened.'

"It's that you're sort of changed by those — those two or three ... 'great and simple images.' [In] those days, in the prehistoric times before DVD and video and access to these movies at the touch of a button, the previous Bond movies were aired at Christmas, traditionally, on the BBC — and as a consequence ... they were freighted with significance, and they were big events in family life."

On the evolution of James Bond as a character

"We didn't really create Bond as a dark character, you know. It was always there. It's in the Flemings. Really, we've come back to things that were suggested many years ago in the novels. One of the things I love about the creation of Bond by [Ian] Fleming is that there's a sort of cruel wit. And, particularly in the last trilogy of novels, the character is suffering from a kind of ennui, a mixture of boredom, cynicism, self-loathing, loathing of his job. I mean, he's very, very dark. 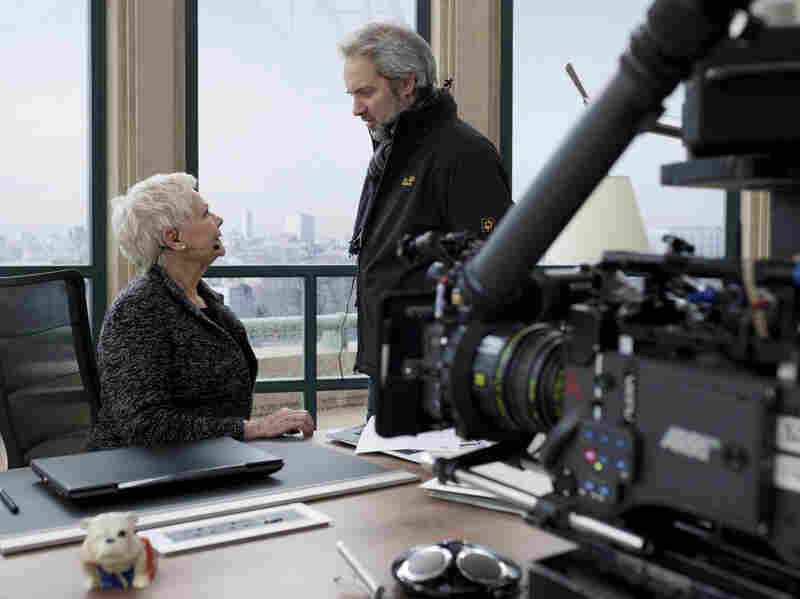 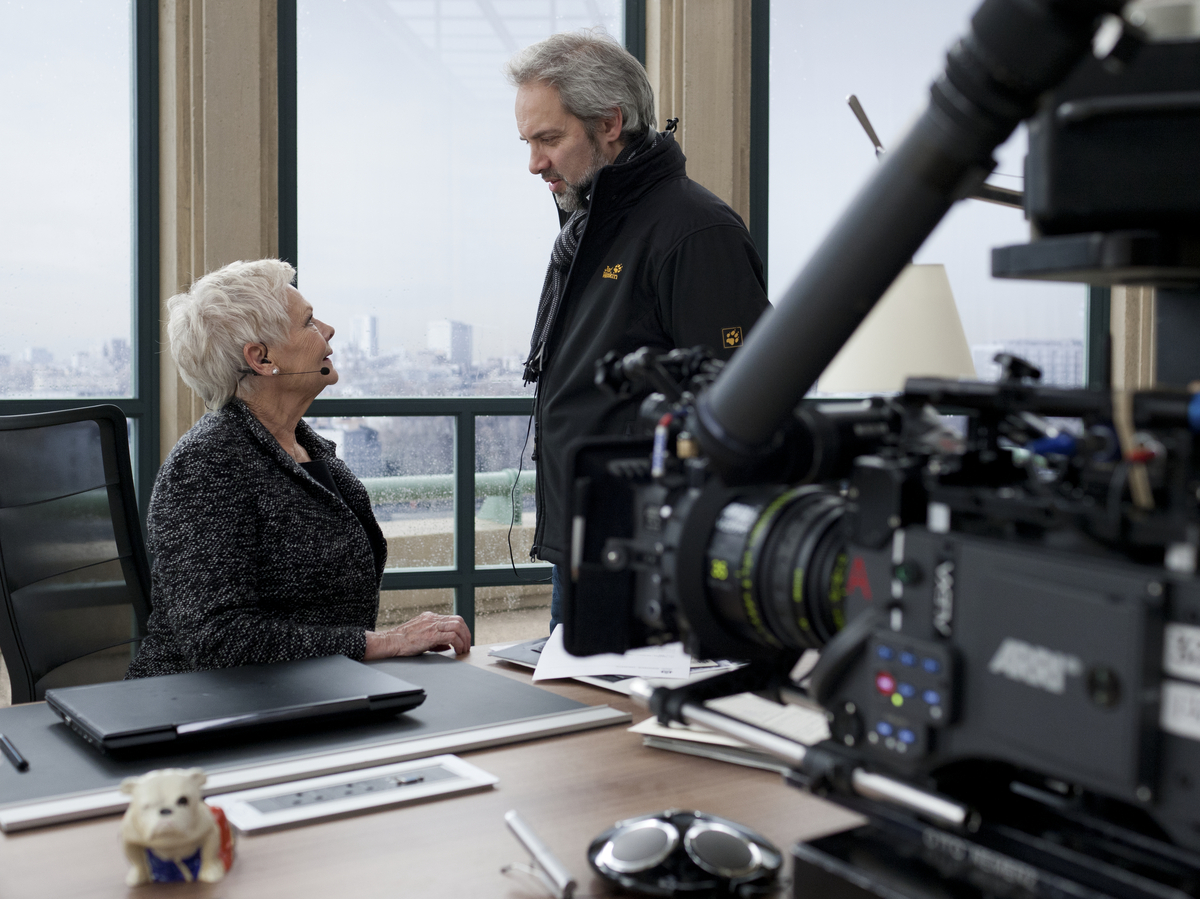 Mendes on the set of Skyfall with Judi Dench, who plays M.

"In fact, these are all things that were features of Bond right at the beginning. The issue became, as they moved towards the more difficult novels, they started abandoning some of the dark stuff, because they thought it wasn't commercial. And Bond became a much more, I won't say 'jokey,' but a much lighter character and more self-referential.

"So I think this idea that somehow we've created a dark and complex Bond is — I'd love to feel that that was true, but I don't think it is. I think it's always been there. ... You just need to dig a little under the surface."

On the element of fun in the Bond movies

"Part of the fun of doing a Bond movie is being able to play on the audience's prior knowledge of all sorts of things. And not only large-ticket items like, for example, the Aston Martin DB5, which I was very keen to get into the movie because it's something that, as a child, was my way in, and I loved it.

"But also lines, echoes, tiny moments, musical quotes — that's the fun of it. And I think that, you know, there has to be that sense of fun. ... There's a danger that films like this can take themselves too seriously, and it's the humor that tells you that you're watching something that is made in a style — in a high style sometimes, but, you know, [a style] that hovers a foot above reality, that never quite touches down.

"Because in the era where Bond began, you know, there were no such things as franchise films, there were no such things as a series of movies or, indeed, you know, [movies] featuring an antihero. But now you can't move for tripping over them, from Bourne to The Dark Knight. ... And it forces you to define what makes Bond, Bond — as opposed to Bourne or Bruce Wayne or any of these other characters.

"And you come back again and again to a tonal issue, but you can push the character through some, you know, some dark protest of the soul — some something that is ... stripping away layers of him, and we hope to try to achieve that in the movie. But at the same time you have to find the tonal moments when you know you're watching a Bond movie."

"You sort of rediscover him in each new story, and I think that in that regard, dealing with an iconic character like this is not so far away from where I originally came from — from theater. You know, you're doing a production of Richard III or The Cherry Orchard, [and] you can't be unaware of the other productions of the play that have existed. But it doesn't stop you somehow rediscovering it and insisting that the audience goes on the journey as if for the first time, each time."