Accessibility links
Martha Stewart Plays Not My Job For the past 30 years, the homemaking guru has taught people to be classy, useful and elegant, frequently employing her trademark line, "It's a good thing." We've invited her to play a game called "It's a bad thing." Three questions about terrible do-it-yourself craft projects. 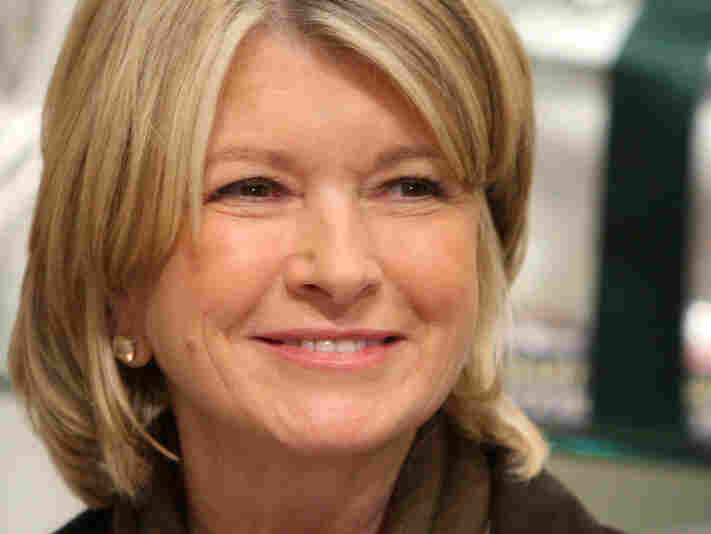 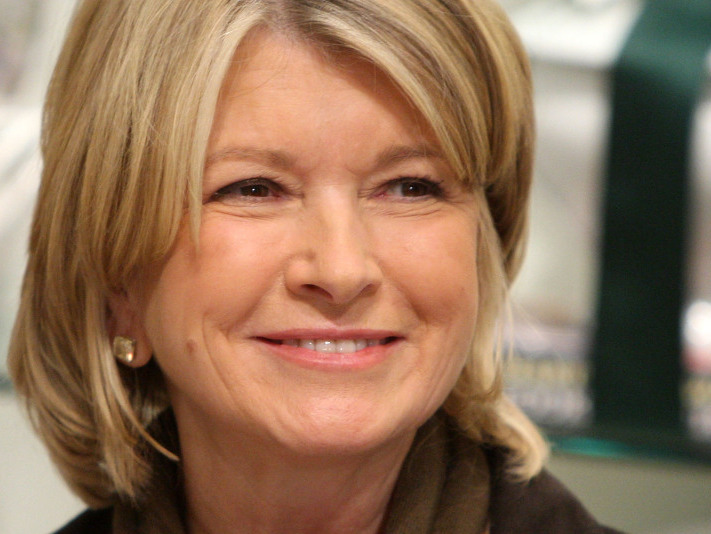 For 30 years, Martha Stewart has been teaching people how to be classy, useful, attractive and elegant, with her books, TV shows, magazines and websites. Though we'd like her to declare Wait Wait one of her trademark "good things," we can't promise that's going to happen.

Stewart is known for helping people come up with great do-it-yourself projects, so we've invited her to play a game called "It's a bad thing." Three questions about not-so-great projects somebody actually put together and displayed on the Internet, as helpfully collected by BuzzFeed in their list of 29 Absolutely Terrible Craft Ideas.

And now, the game where we invite accomplished people to take a little time off from accomplishing anything. For 30 years, Martha Stewart has been teaching people how to be classy, useful, attractive and elegant, through books, TV shows, magazines and websites. We think we're going to be the first thing that even she can't make into a good thing.

MARTHA STEWART: Hello, how are you?

SAGAL: I'm fine, thank you. How are you?

SAGAL: So, this is true, my wife was trying to explain to my kids what it is exactly you do. And you do so many things that it's really hard. Well, you know, she does crafts and cooking and she has TV shows. How would you describe yourself?

STEWART: Well, I am a teacher, and I teach people what they want and need to know, all about living. And the subject is quite vast, so you have to be pretty good at a lot of different things to teach the subject of living.

SAGAL: I mean, you say people need to now.

SAGAL: Do people need to know how to make their own brass andirons from melted jewelry? I mean because you do these incredibly elaborate things.

STEWART: Well, I don't think I've ever done that but I have...

STEWART: Take the point of a sharp, sharp knife and just score through the skin and then quarter it, OK?

STEWART: Then break it into four quarters, the pomegranate, turn the quarter of the pomegranate skin side up, in the palm of your hand, and hit it with the back of a wooden spoon, over a bowl. And if you just keep hitting that skin of the quartered pomegranate in your hand, all the seeds will fall out neatly into the bowl and you will be left with an empty skin.

STEWART: You haven't bruised one of those beautiful little ruby-red seeds in the pomegranate.

SAGAL: I actually have a fairly serious question.

SAGAL: I want you to imagine that you've been invited by a friend, a close friend, somebody you're very easy and causal with, over to dinner, and they take out a pomegranate and they start removing the seeds incorrectly. Could you...

STEWART: No, no, there are many ways to take the seeds out of a pomegranate.

STEWART: This is by far the quickest, fastest, most practical and neatest way to do it.

SAGAL: Let's say that they are removing the seeds in a non-optimum way.

SAGAL: Could you, Martha Stewart, in that situation which I have described, stop yourself from telling them how to do it better?

SAGAL: You couldn't do it.

SAGAL: You just don't have that gear. You can't just stop and go...

STEWART: No, but it's fun. And they will love me forever...

STEWART: Because I have solved a problem, a lifelong problem of how to get the (bleep) oh, excuse me.

STEWART: The seeds out of a pomegranate.

ALONZO BODDEN: I guess it has been a problem.

SAGAL: Yeah. Is it hard - I want to ask, again, because I'm interested in what your life is like, because I've seen your shows and I've read your magazine. One of the things I admire so much about you is you make everything sort of excellent and classy and lovely no matter what you start with. We had some challenges for you to see what you would think of to do with this.

SAGAL: Here we go. So, for example, let's say, I say Martha, here's your project, boom, on the table, a can of Spam.

STEWART: What would I do with it?

STEWART: Oh, I would open the can.

STEWART: I would slice it into about between an eighth and a quarter of an inch slices.

STEWART: And I would fry it in butter, just lightly sauté it in butter, nice butter, unsalted butter and I would eat it with Dijon mustard on nice country white bread, crusty bread. It is delicious.

P. J. O'ROURKE: You were a bachelor guy in a former life because I have made that breakfast.

SAGAL: First of all, you've done that, what you just described...

STEWART: I have. I have. I mean, listen, I grew up in a family of six kids.

SAGAL: All right, it's time to throw down, Martha Stewart.

STEWART: It's awful. I do, though. If I'm in somebody's house and they have Velveeta cheese, I do take a piece of it, and I really like it. I'm not kidding. But I have never bought it.

STEWART: I don't know what those are.

SAGAL: That's all right, you don't really want to know.

SAGAL: Have you ever, like, I mean because, again, I just keep coming back to the volume of stuff that you've talked about and you do in all your projects. Have you ever woken up one day and you've got a TV show to do or a magazine article to do or a recipe to write and you got nothing? You just have run out of tropes and ideas and clever projects?

SAGAL: You've never had to wait and just brainstorm?

STEWART: No. Curiosity is a good thing.

SAGAL: Have you ever looked yourself upon Wikipedia?

STEWART: I have. It's hideous and it's wrong.

SAGAL: It is hideous.

STEWART: It's all wrong. They even have my date of my first and only marriage wrong.

SAGAL: We actually wanted to ask you about something we found on Wikipedia.

SAGAL: So if it's not true, you can correct us. According to Wikipedia, you once dated Mr. Anthony, or Sir Anthony Hopkins. And Wikipedia says that you broke it off because you couldn't stop thinking of him as Hannibal Lecter.

STEWART: That happens to be true.

STEWART: And I didn't.

SAGAL: It would probably be easier if he didn't wear that hockey mask all the time.

SAGAL: It's very comfortable, he said. Well, Martha Stewart, we are delighted to have you with us. It is a pleasure to have you here. But we have asked you here today to play a game that we are calling?

CARL KASELL: It's a bad thing.

SAGAL: So, you're wonderful at helping people come up with great do it yourself projects. We're going to ask you about three not-so-great projects somebody really put together and displayed on the internet, as helpfully collected by Buzzfeed. Get two questions right, you'll win our prize, Carl's voice on the home answering machine for one of our listeners, of course. Carl, who is Martha Stewart playing for?

STEWART: OK, well poor Hannah, she's probably going to not get your voice.

SAGAL: All right, here we go.

SAGAL: Here's your first question. People love to put logos on things on which they do not belong. One big fan of Luis Vuitton put their logo all over their what? A: their house? B: their wife? C: their assault rifle?

SAGAL: Their house. No, their assault rifle.

SAGAL: It's a charming AK-47 with Luis Vuitton logos and a bright green ammo magazine. Just the thing to bring to a firefight at a soiree.

SAGAL: Next question. People love to reuse common household goods in their crafts, as I'm sure you know. There's a whole website out there devoted to making crafts out of spare what? A: Fingernail clippings? B: Tampons? C: Sodium sulfate, a byproduct of paper mills?

SAGAL: I'm going to ask you something.

SAGAL: If I came to you with a small container of fingernail clippings and said, "Make something," could you do it?

SAGAL: So you're going to stick with that answer, fingernail clippings?

SAGAL: The website is called Tamponcrafts.com. You can go there to learn how to make Christmas ornaments.

STEWART: I bet you could probably find the fingernail thing, too.

SAGAL: You're probably right. All right, Martha, one last question. Let's see if we can pick this one up.

SAGAL: People love to make homemade beauty products. So if you want something crafty for use in your bathroom, you could buy, from Etsy, of course? A: Tanning lotion made with real gravy? B: Soap with real razor blades inside? Or C: Exfoliating wipes that are just squares of sandpaper?

SAGAL: Are you going to stick with that?

SAGAL: It was actually the soap with the razor blades.

STEWART: See, that's very unpleasant. And they sell that on Etsy?

SAGAL: They do sell it on Etsy. They're soap. It's translucent soap so you can see the razor blades inside. And these soaps are labeled "for decorative purposes only."

SAGAL: Carl, how did Martha Stewart do on our quiz?

STEWART: Oh Hannah, I'm so sorry. I'll do my voice for you, Hannah, any time.

SAGAL: Hi, this is Martha Stewart. Hannah's not here, she's out doing something useful.

SAGAL: Something like that. Martha Stewart's holiday offerings can be found at Macy's, Home Depot, and Staples. Martha Stewart, thank you so much for joining us on WAIT WAIT...DON'T TELL ME!

SAGAL: What fun to talk to you.

STEWART: Thanks for having me.