Accessibility links
How The Fiscal Cliff Would Hit The Economy From higher payroll taxes to automatic cuts in military spending, the looming budget crisis could drag the economy back into recession and create turmoil in the financial markets, economists say. To better understand what's at stake, have a look at some of the key phrases involved in the crisis. 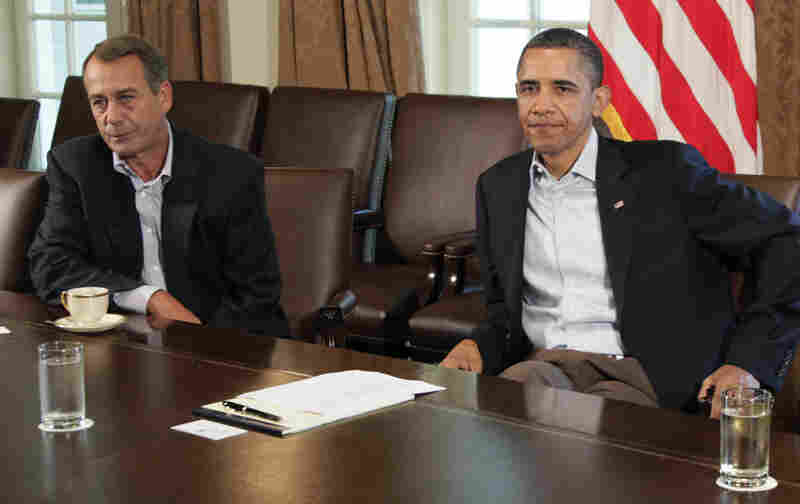 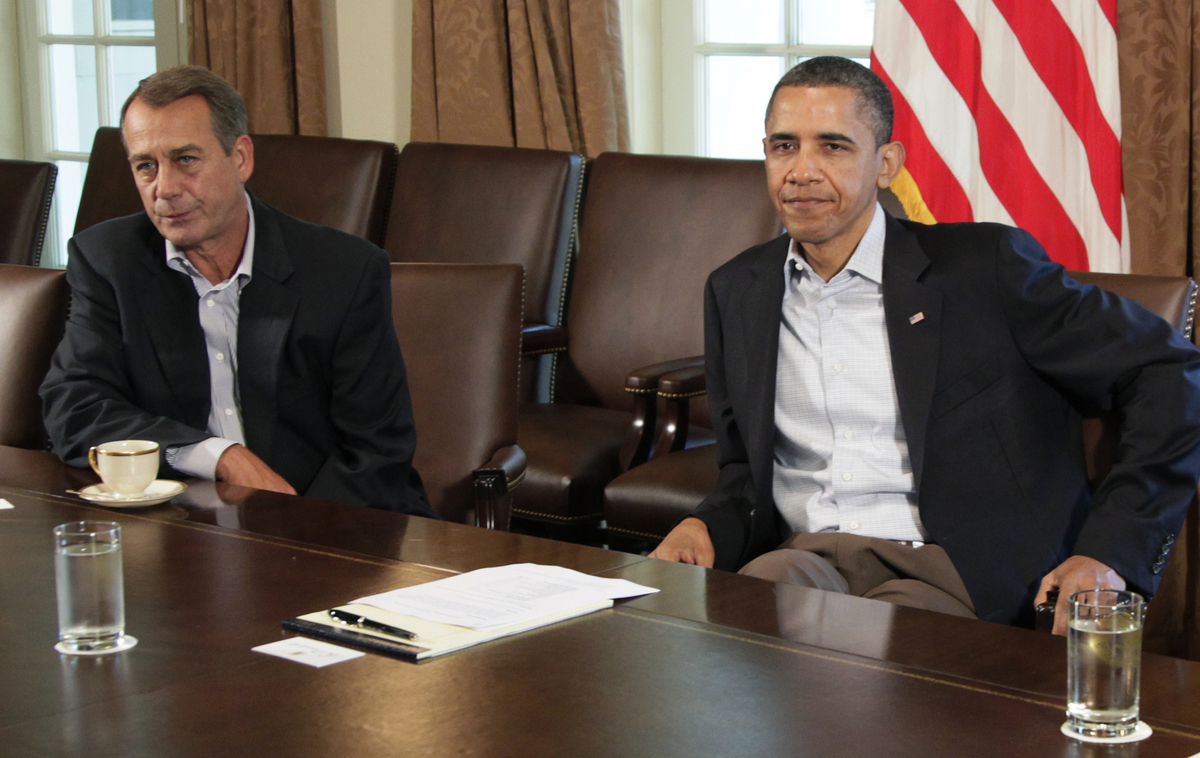 This week, President Obama will meet with congressional leaders to begin working out a deal to avert a budget calamity commonly known as the fiscal cliff.

Economists are unanimous in saying that if the leaders fail to keep the country from going over the "cliff," both the stock and labor markets will fairly quickly go "splat."

To keep that from happening, Congress must pass legislation to stop or delay or phase in looming budgetary changes. That phrase "fiscal cliff" refers to a massive collection of automatic tax increases and spending cuts that kick in at year's end. If they are all allowed to take full effect, it would be like tying a $600 billion weight to the economy.

The problem is that Democrats want to fix some of the issues by increasing taxes on the wealthiest Americans, and Republicans oppose hikes in tax rates.

"We can't just cut our way to prosperity," Obama said Friday. "We have to combine spending cuts with revenue and that means asking the wealthiest Americans to pay a little more in taxes."

Before Obama spoke, House Speaker John Boehner, the top GOP leader in Washington, said House Republicans won't agree to higher rates but would be open to limiting tax breaks to raise revenues. "It's clear there are all kinds of deductions, some of which make sense, some of which don't," he said.

The two men seemed to be leaving themselves room to negotiate. Whether they will compromise is unknown. But economists and investment experts say one thing is clear: that failure to do so would derail the recovery.

"Absolutely" there will be an economic reversal unless Congress acts, said Garth Friesen, who serves on the Federal Reserve Bank of New York's Investor Advisory Committee. He also is a top investment officer for III Associates, a hedge fund.

Every American who earns a paycheck or owns stock will get hit with higher taxes, Friesen said. "That's across the board — from the lowest taxpayers to the wealthiest," he said. "It's everybody."

And while some of the changes may take a while to be fully felt, many are "like a light switch," Friesen said. The tax hikes will switch on as New Year's parties end.

IHS Global Insight, a forecasting firm, says that if Congress and the White House were to hit an impasse, it "would be a recipe for turmoil in the financial markets."

Here are some ways that that economy will get hit:

Payroll tax cut. To give consumers more cash to spend, Congress lowered payroll taxes by 2 percentage points during 2011 and 2012. For someone making $50,000 a year, that worked out to about $20 a week. If the tax holiday ends abruptly, take-home pay will immediately shrink.

Bush tax cuts. On Jan. 1, all of the tax cuts that were phased in, starting in 2001, will expire. That will mean higher taxes on both income and investments.

Unemployment benefits. Ever since the economy tanked in 2008, Congress has been extending benefits beyond the standard 26 weeks. Those extensions will end in the new year, so lots of job seekers will be on their own in January.

Spending cuts. Unless Congress changes the law, automatic spending cuts worth $1.2 trillion over a decade will kick in. They hit particularly hard at military spending, so many people who work for contractors will lose jobs.

What would all of that do to the economy? A study by J.P. Morgan Asset Management said that "this amount of fiscal drag would push the U.S. economy into recession."

And that, the company concluded, would "lead to a very unhappy U.S. population."

As negotiations begin this week, here are terms that are likely to be used a lot.

The action of taking legal possession of something. For example, a judge can sequester a jury, i.e., hold it in isolation in a hotel, until a trial is over. In the case of the federal budget, Congress passed legislation in 2011 that ordered the Treasury to, in effect, sequester the budget authority that would allow the government to spend $109 billion on defense and domestic programs in 2013. This sequestration process is scheduled to continue each year until the Treasury has saved about $1.2 trillion to help hold down the national debt. Lawmakers had hoped that by setting up these broad, automatic spending cuts, they would motivate themselves to find more carefully considered trims. But Congress has not passed a deficit-reduction package, or passed legislation to end sequestration. So the deadline is drawing closer as the year winds down.

A government's annual income. Most revenue comes from taxes, but some comes from fees and other sources such as sales of assets. To balance the budget, government must either increase its streams of revenue and/or cut spending. Many Democrats say they are willing to pass certain spending cuts, especially for military spending. But Republicans have opposed any tax rate increases. After the election, however, House Speaker John Boehner, R-Ohio, said Republicans are now "willing to accept new revenue under the right conditions ... a simpler, cleaner, fairer tax code, with fewer loopholes and lower rates for all."

The national debt is the total of all the financial obligations the federal government failed to pay off in the past. Each year, the government takes in revenue and then pays its bills. Those bills include the repayment of money borrowed from bondholders, salaries of federal workers, payments to contractors, and so on. Ideally, the revenue coming in to the Treasury should be the same, or even greater, than the amount being paid out. But that balance rarely happens. Far more often, the government spends more than it makes, so it has to borrow yet more money to get through the year. That creates an annual budget deficit. Those deficits pile up year after year, and collectively, they add up to the national debt, which is about $16 trillion now.